Impossible not to get excited at this time of year, particularly when the sun comes out so that gardening is a real pleasure. The other day it was so warm in my back garden that I got to eat lunch outside without a coat, first time this year. The Spring show is beginning in the back border, and the Crocus tommasinianus ‘Lilac Beauty’ is the current star. 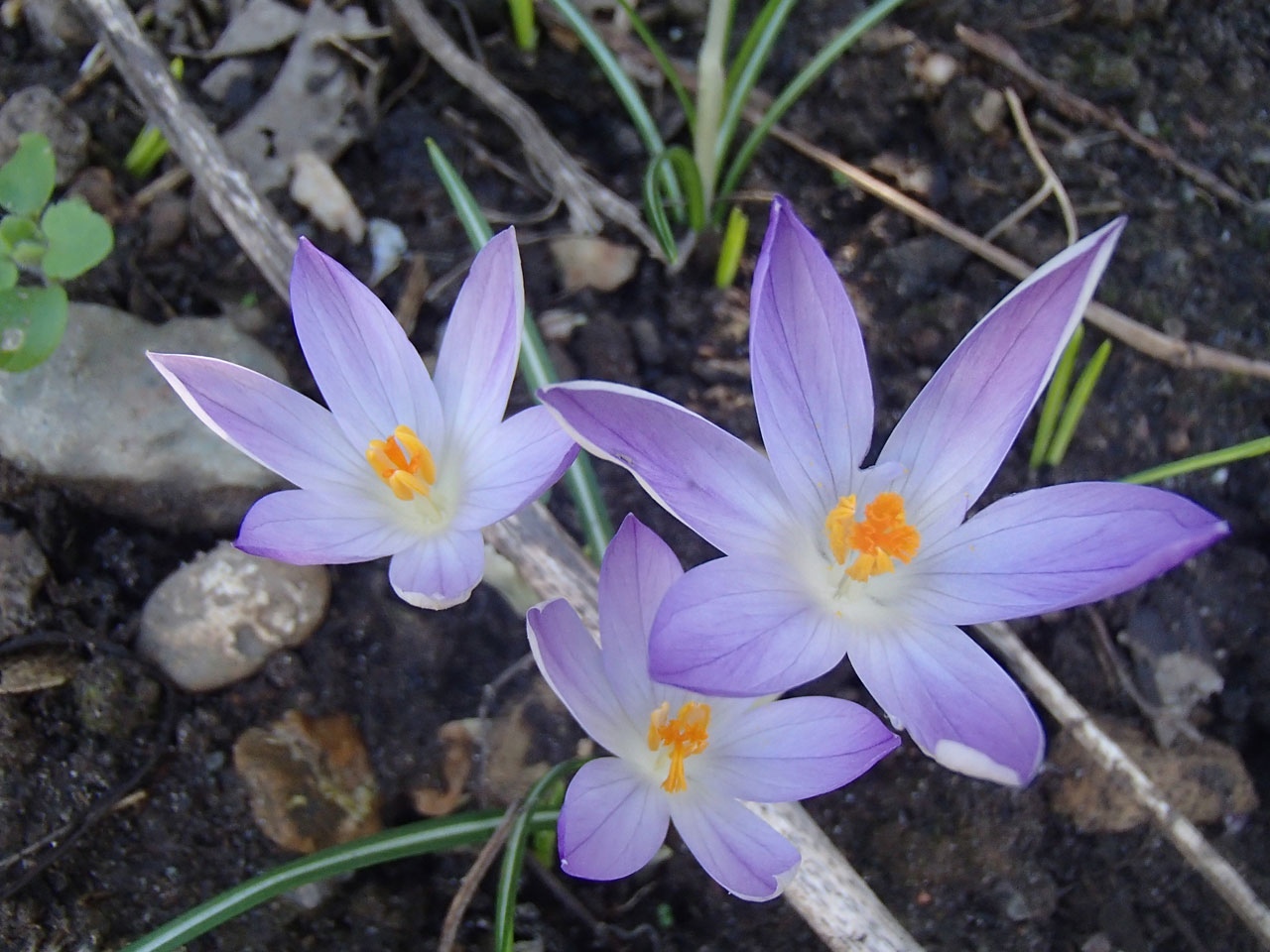 I planted these bulbs really late, in mid-December, so I imagine they will be popping up earlier next year, but I was struck by how well the delicate lilac goes with the leaves of Heuchera ‘Venus’. I wish I could claim I planned it that way, but that would be a big fat lie… 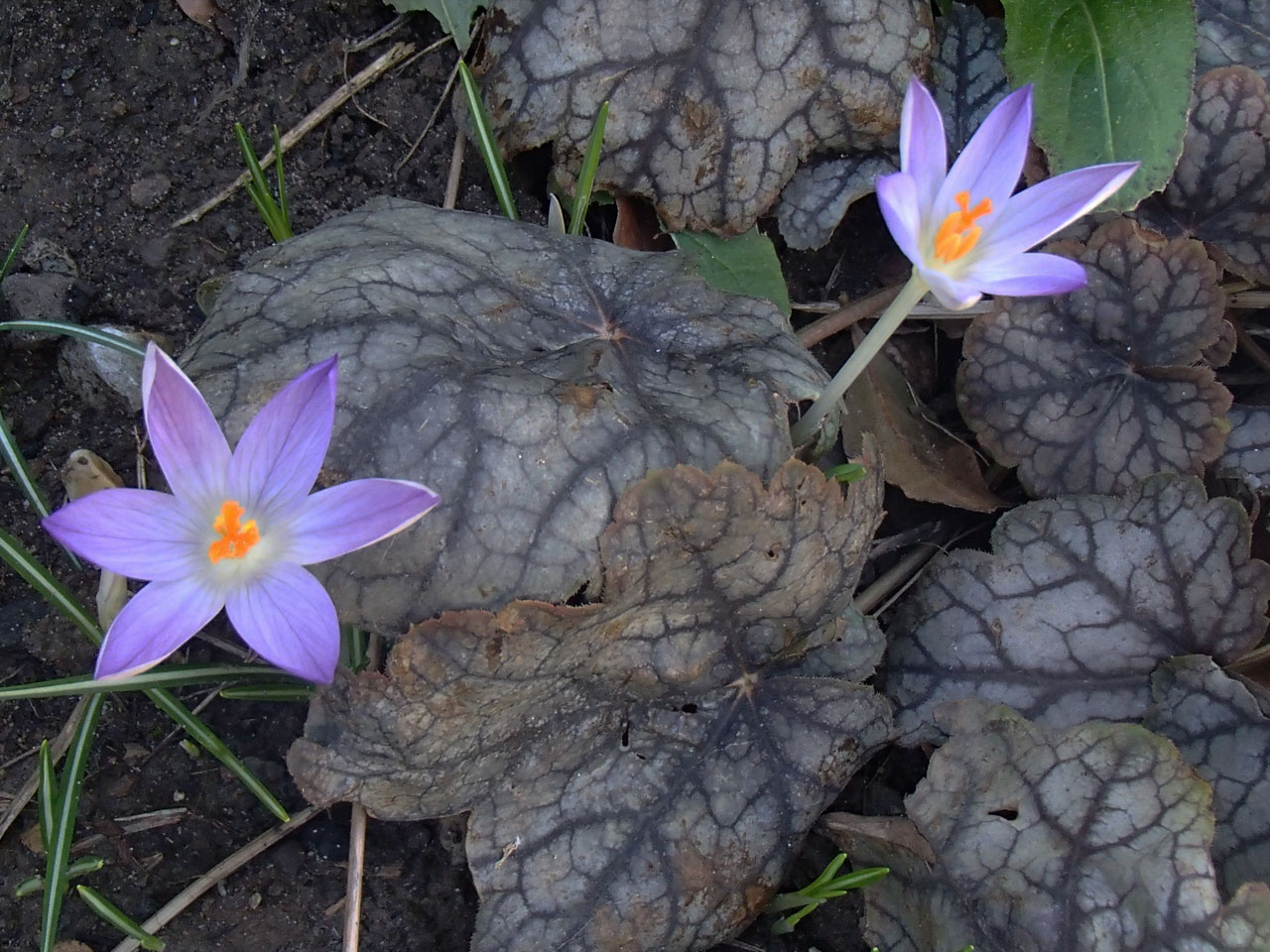 I had hoped that the soft colour would go well with the native primroses that are gradually spreading themselves around, and I’m pleased to say they do. I have darker purple “tommies” growing in the grass, where they show up well, but I think the paler lilac works better with the soft yellow. 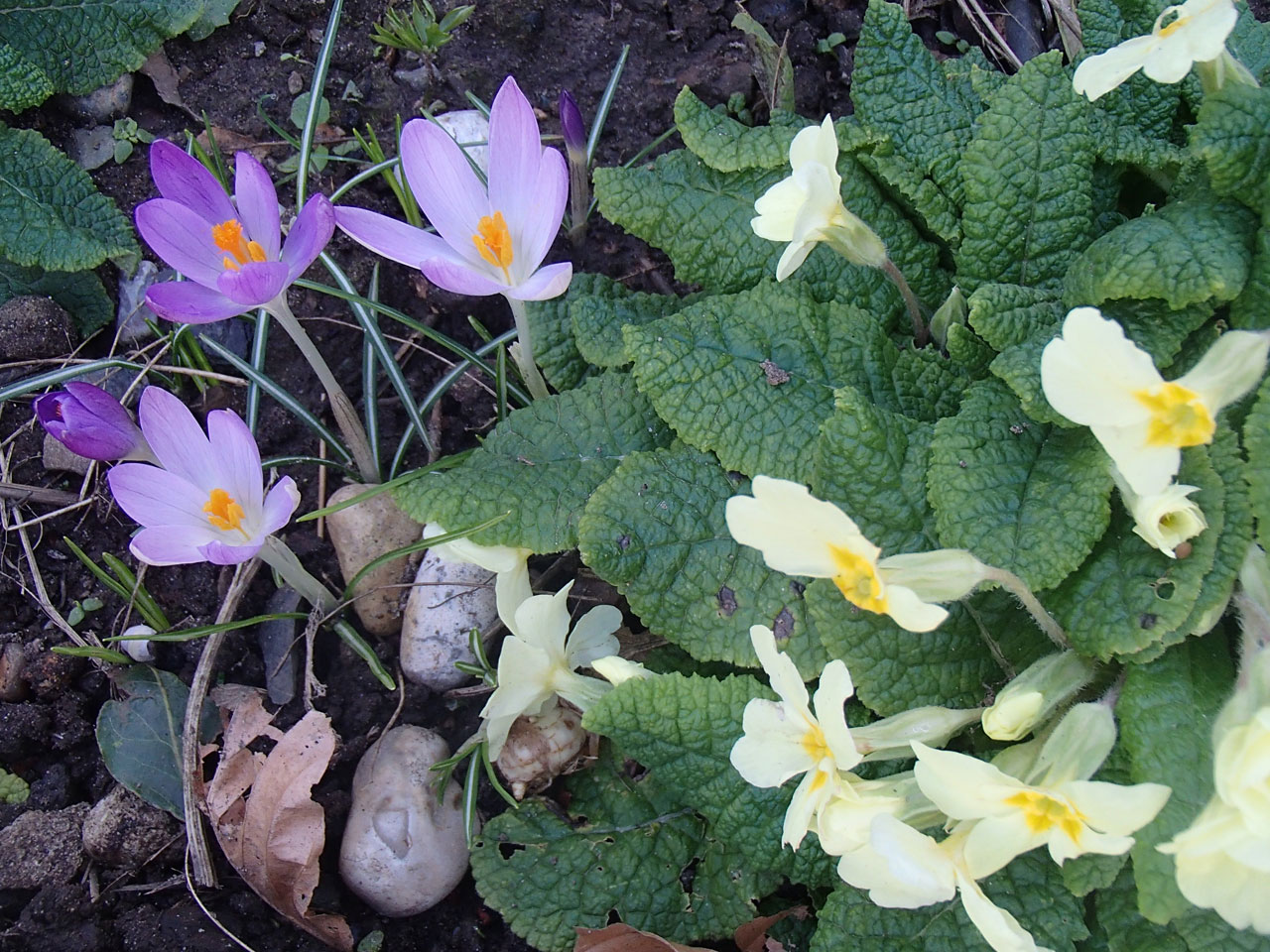 I love primroses, and it is great to see them spreading around so happily now. I’ve moved most of the brightly coloured ones that I inherited into my father-in-law’s border, and am concentrating on the plain pale yellow natives. I was surprised to see Geranium phaeum starting to flower already, and although you have to get up close to notice it, the yellow stamens pick out the darker yellow centers of the primroses rather nicely. Not showy, but delicately lovely. Something to be admired whilst weeding – and lets face it, we all need a little entertainment whilst weeding! 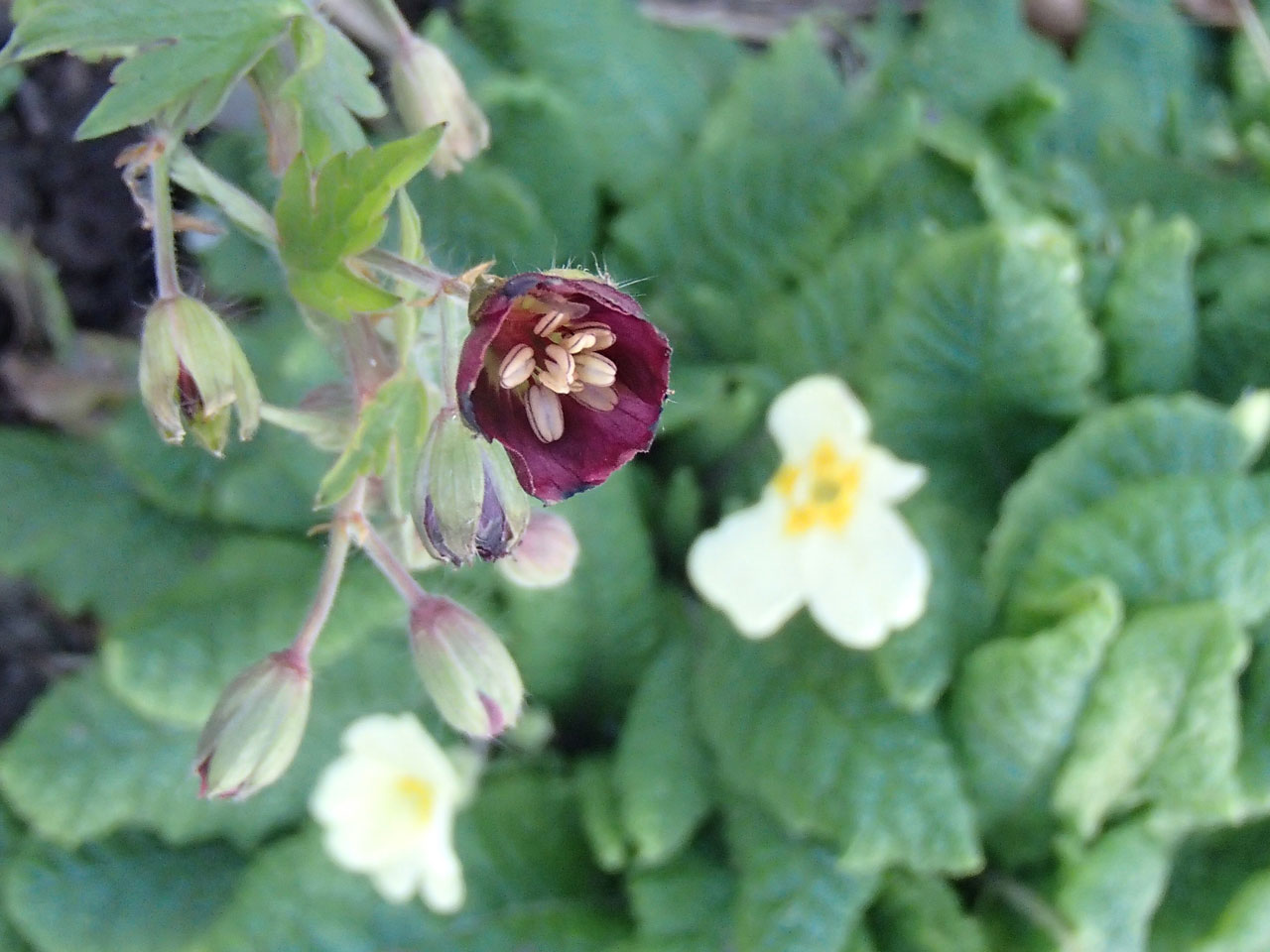 I planted some Iris reticulata ‘Harmony’ in this border too, but only a few have popped their heads up, probably too wet. I hope this little cluster plans to stick around and show up to the Spring party next year though, such gorgeous colouring. 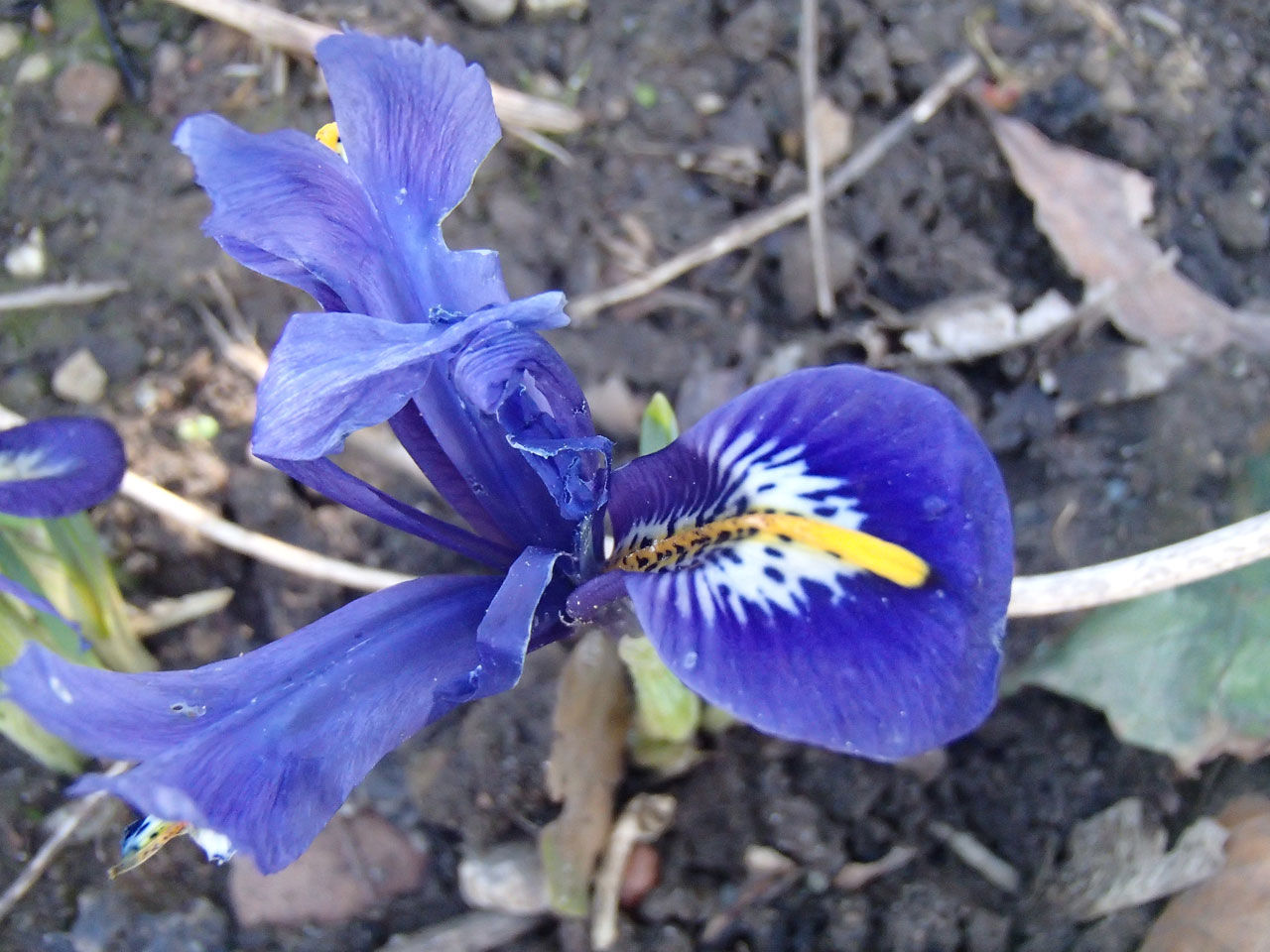 And underneath the plum tree, the first of the wood anenomes are appearing, though this one looks a little ragged. 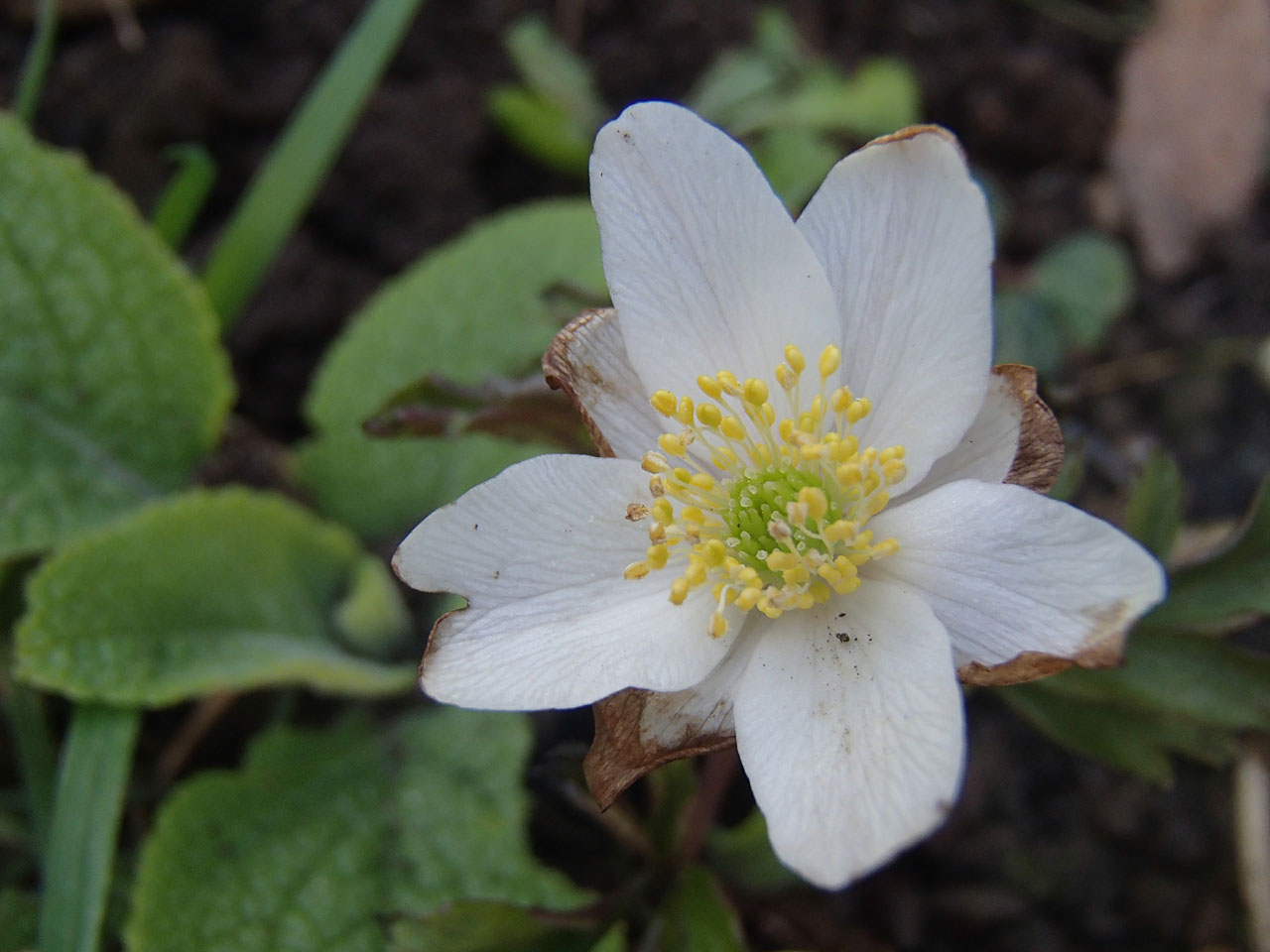 As much as I am enjoying the emergence of all these lovely Spring flowers, I am determined to keep on top of the other, less welcome appearances in the borders this year. I am paying for my lack of weeding time last year with a positive plague of Alexanders, and the creeping buttercup has been, well, creeping everywhere. Add in the dense carpet of germinating sticky weed seeds, and I have my work cut out. Even worse, I really want to get rid of the grass in the front garden so that we have less mowing to do. We’re both much busier than we used to be now, and neither of us particularly enjoys cutting the grass, a job made much more awkward by the untimely death of our cordless mower. We are back with an electric mower, and managing that cable round the kitchen garden beds is a rather frustrating experience.

The problem is, I hate lifting turf. It always does my back in, all that driving the spade under the sod and then lifting it into the barrow. Plus there is the slightly inconvenient fact that I am very hard on spades. I have been going through them at a rate of about 1.5 a year! So I consulted the wonderful facebook community of All Horts, since there are lots of professional gardeners in the group. Surely they would know what kind of spade I could buy that would actually last a little longer than one year? I had lots of helpful advice, and apparently Lidl to a fine range of cheap garden tools, which would mean I could buy a couple and just keep replacing them as I break them, but what caught my eye was a suggestion to look at Chillington Tools. They do a range of digging hoes and forks that attach to wooden handles at right angles, so that you use the weight of the tool to do the work. I found myself watching YouTube videos of people weeding and digging up turf, apparently without effort, and I found myself ordering a heavy duty digging fork and a double headed hoe. I really like that they are British made, and that the handles are replaceable. 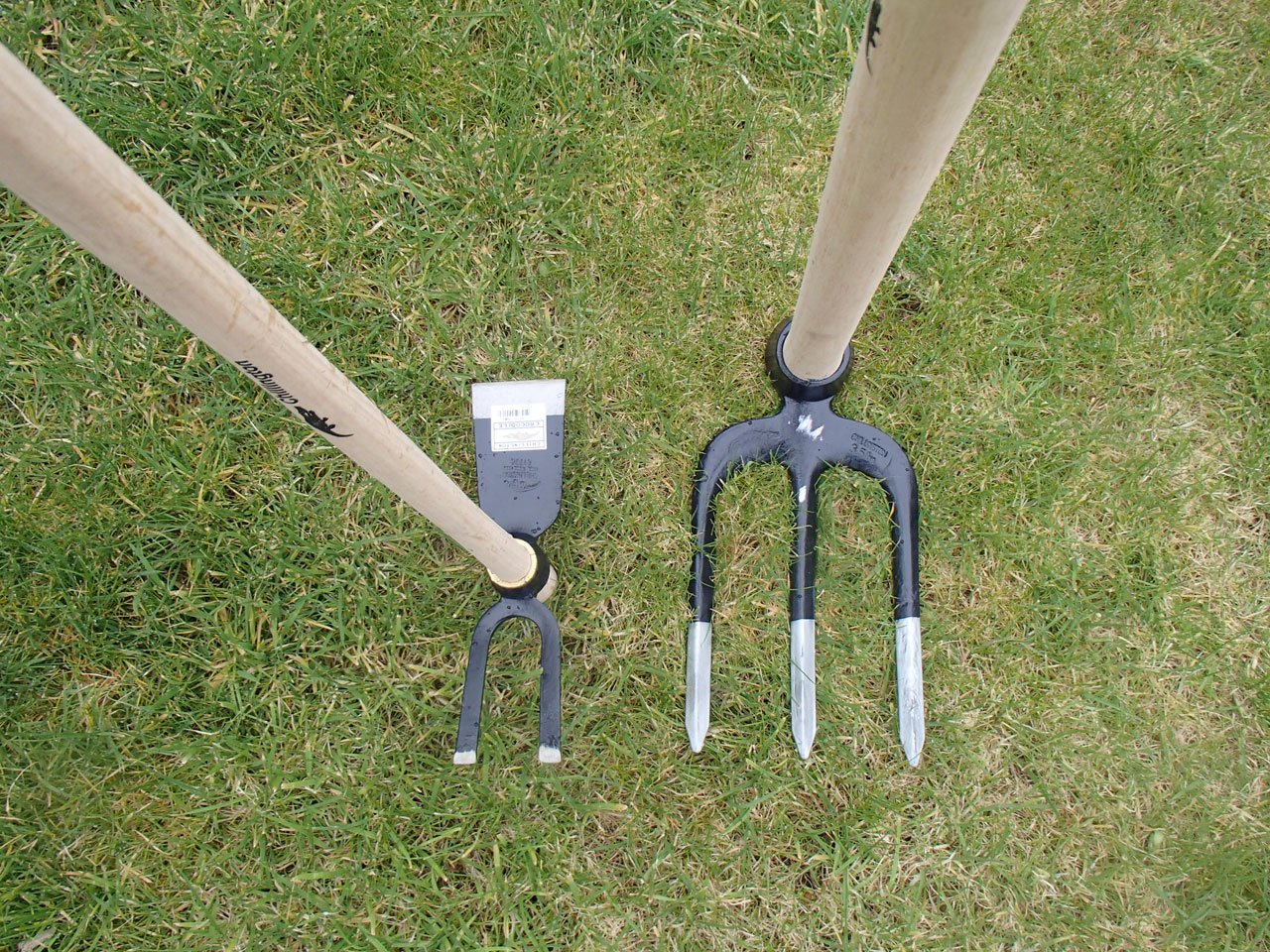 I bought the double headed hoe in the hope that it would work well for weeding out the creeping buttercup in my crowded borders. It works like a dream! Honestly, I covered half the Park border in a fraction of the time that the other half took using a fork. I was able to use it from a kneeling position most of the time, eliminating the constant bending over and picking up of detritus that always leaves me feeling about 108 years old. Even when I was having to stand, I didn’t hurt my back like I usually do – I did that trying to sort out the compost heaps later on. I love it. If the heavy digging fork works even half as well on that grass, I am in tool heaven. I look forward to using the hoe in the veg beds later in the year.

Which brings me to the trees. And tree following. Which we are supposed to post about between 7th and 14th of each month. Well, I managed to take the photos within that timeframe, I just didn’t get around to posting, not least because there was so little to report. The strange plastic boxes are still there, and I still don’t know what they are for. The buds look exactly the same as they did last month, no closer to opening, though I am sure this isn’t true. But there is a little offering of stones at the base of my tree now… 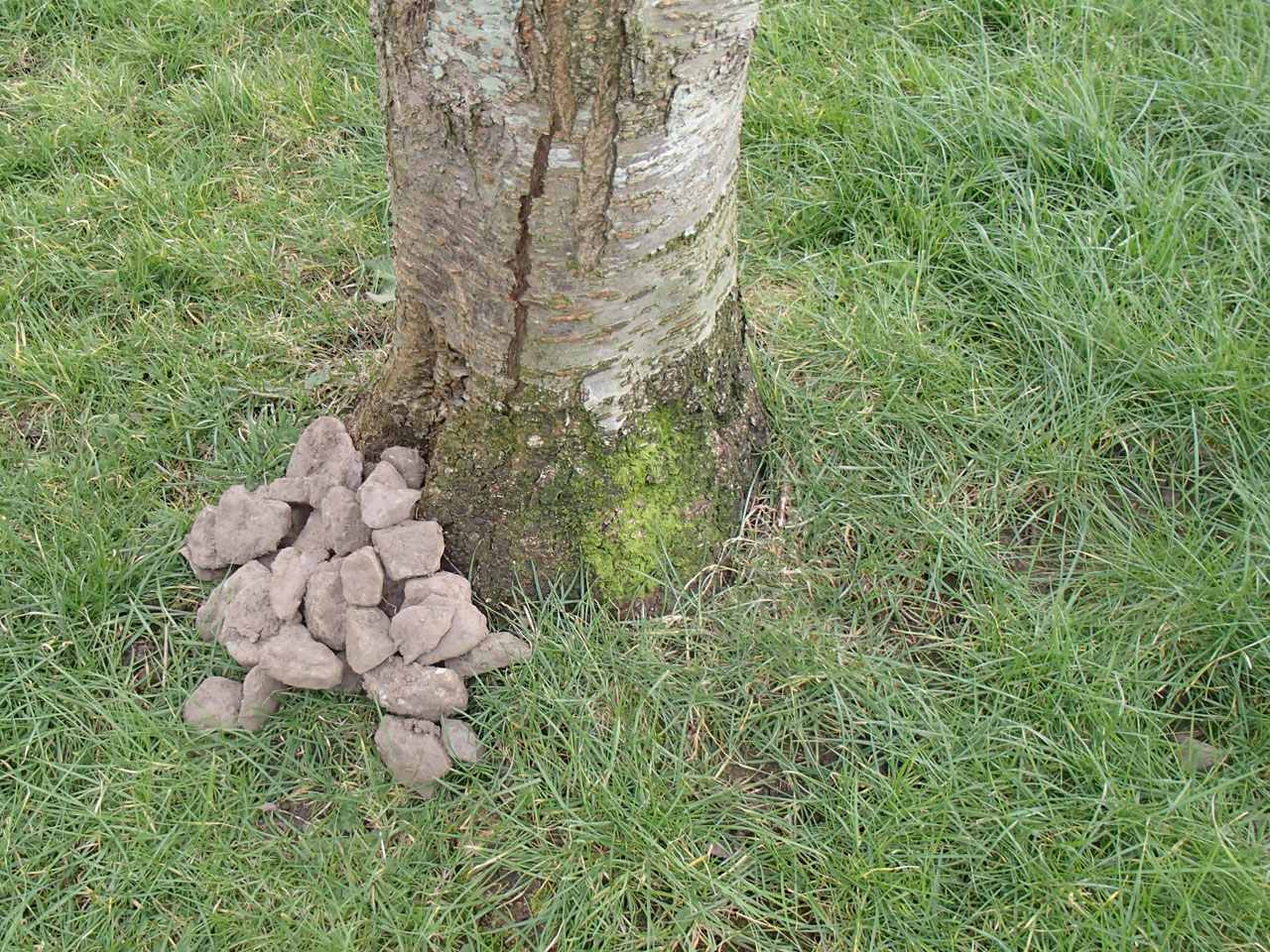 I suspect this is the work of whoever cleared the wildflower borders behind, which are now all bare. 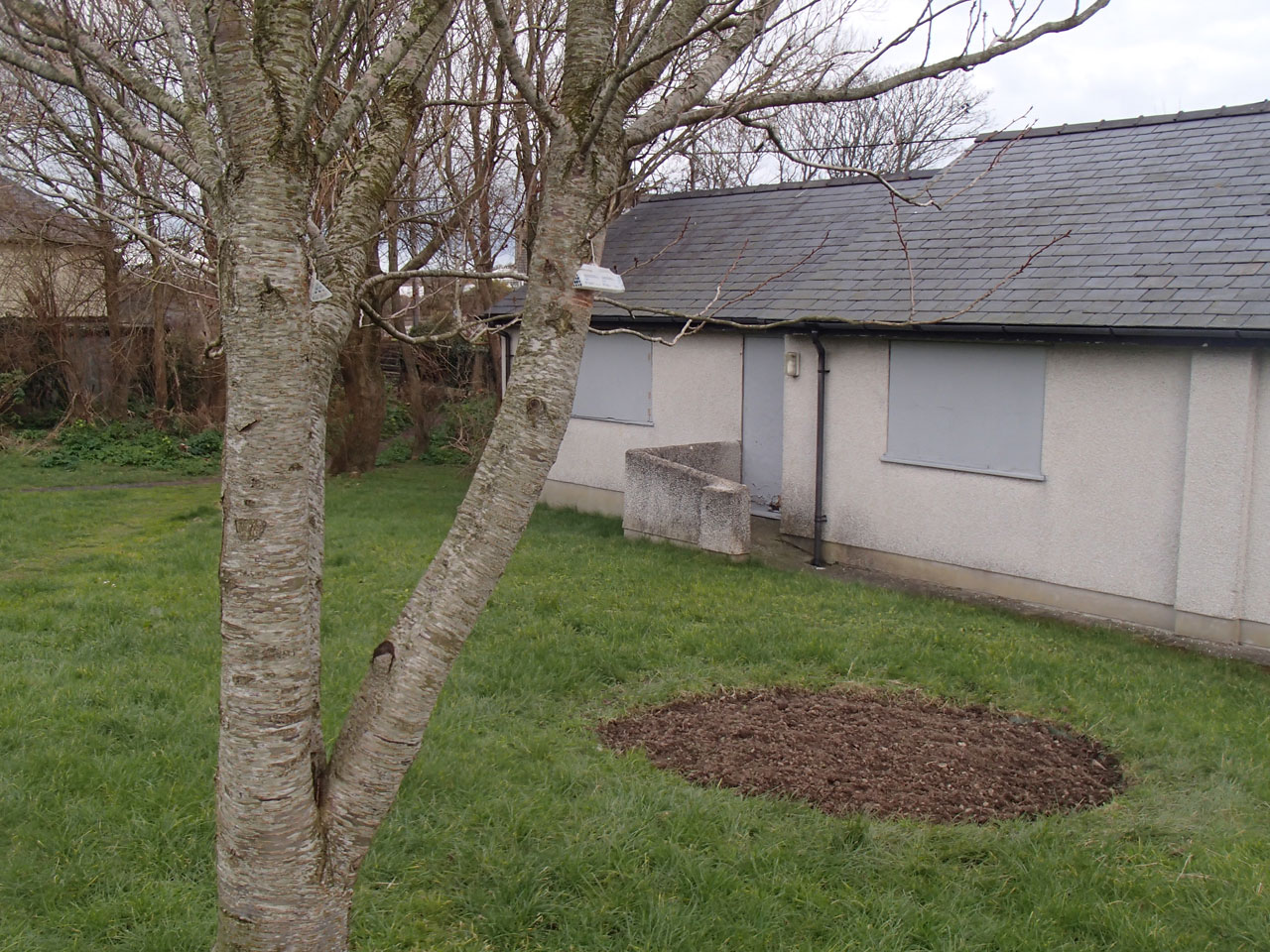 Or perhaps they have been sown with seed already? Who knows. I’ll have to pop back next month, hopefully in time to actually join in the meme!

In the meantime, I will enjoy the last of the hellebores, and look forward to playing with my new toys using my new tools. Happy Springtime! 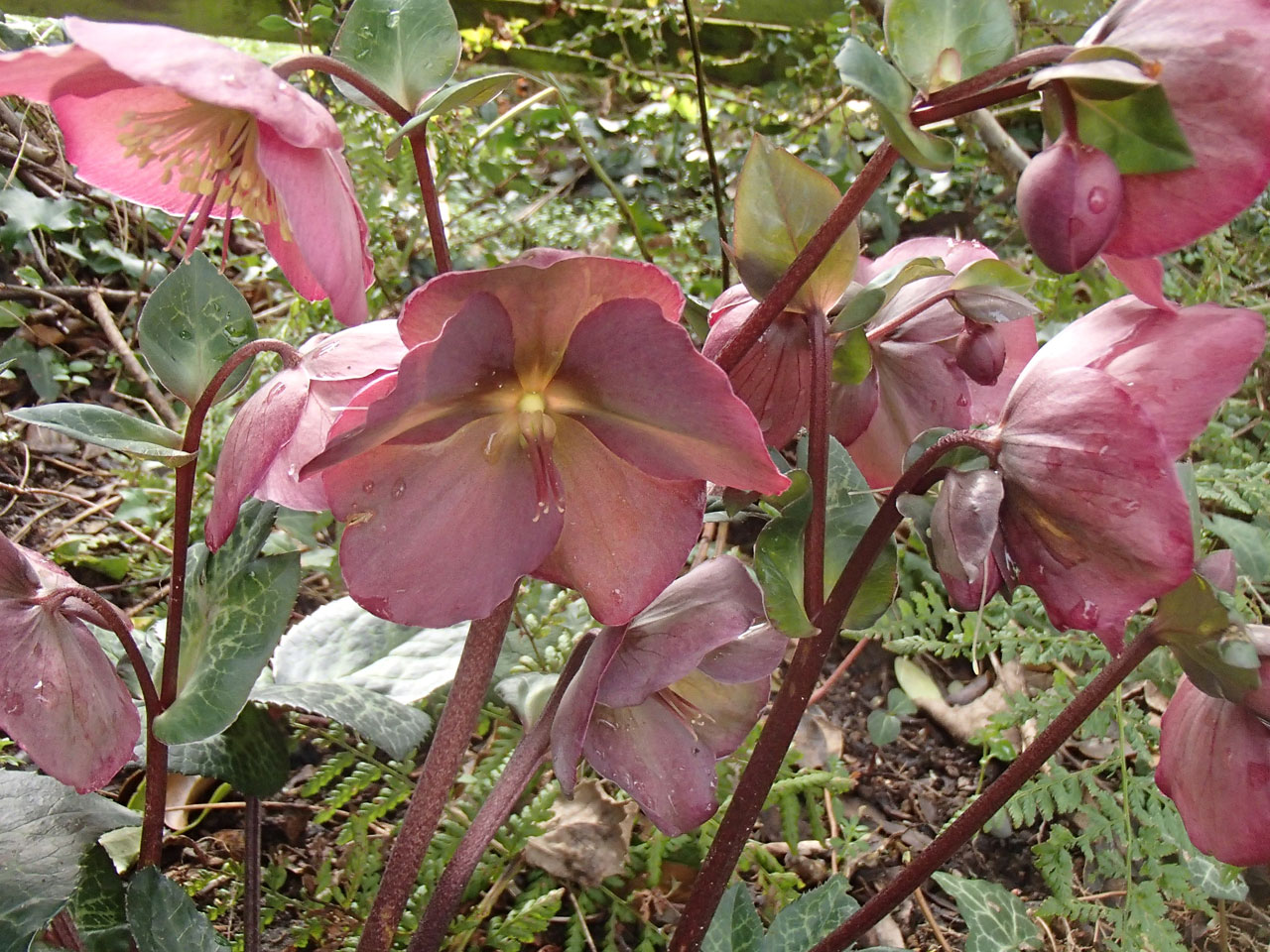 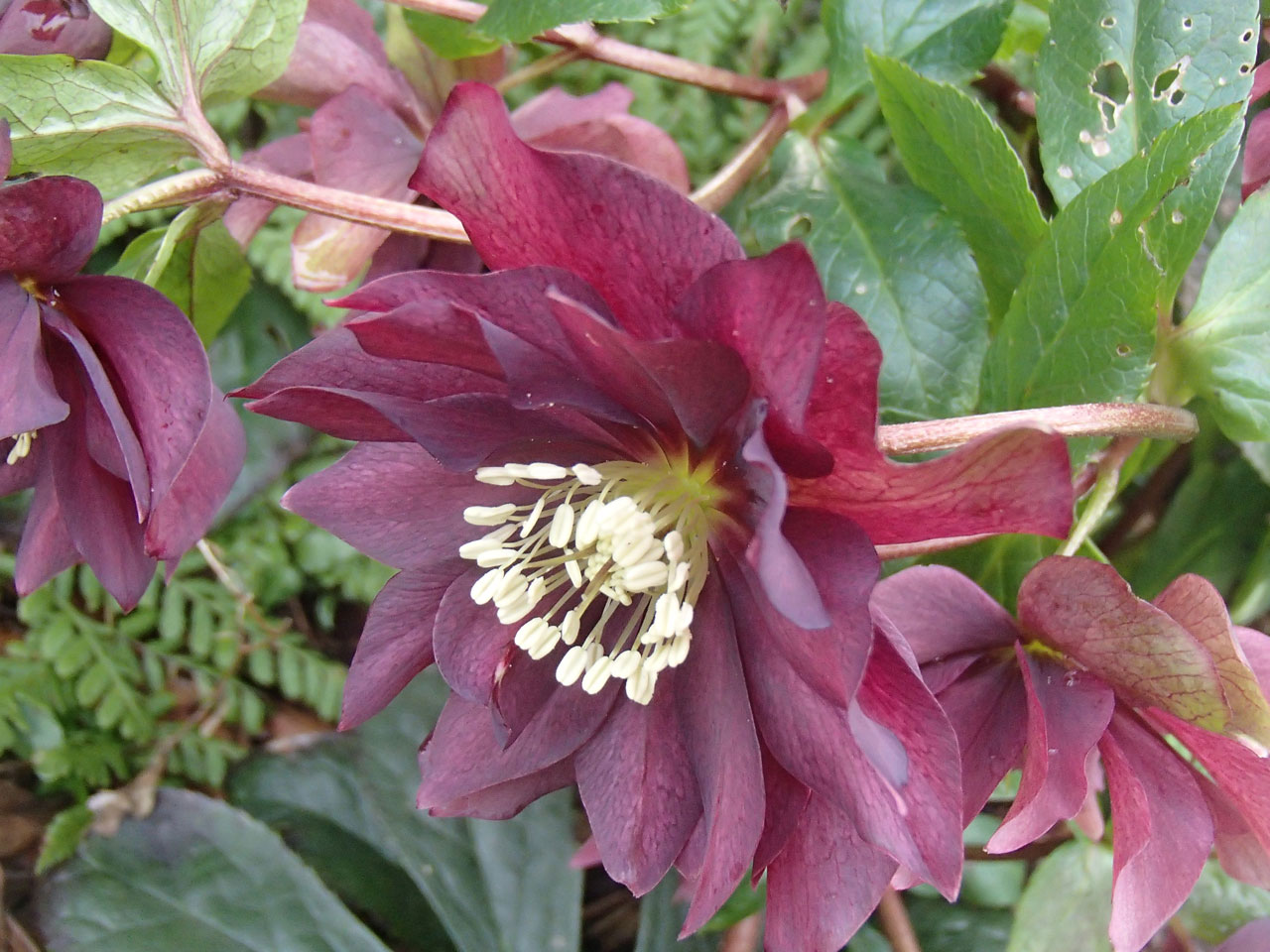 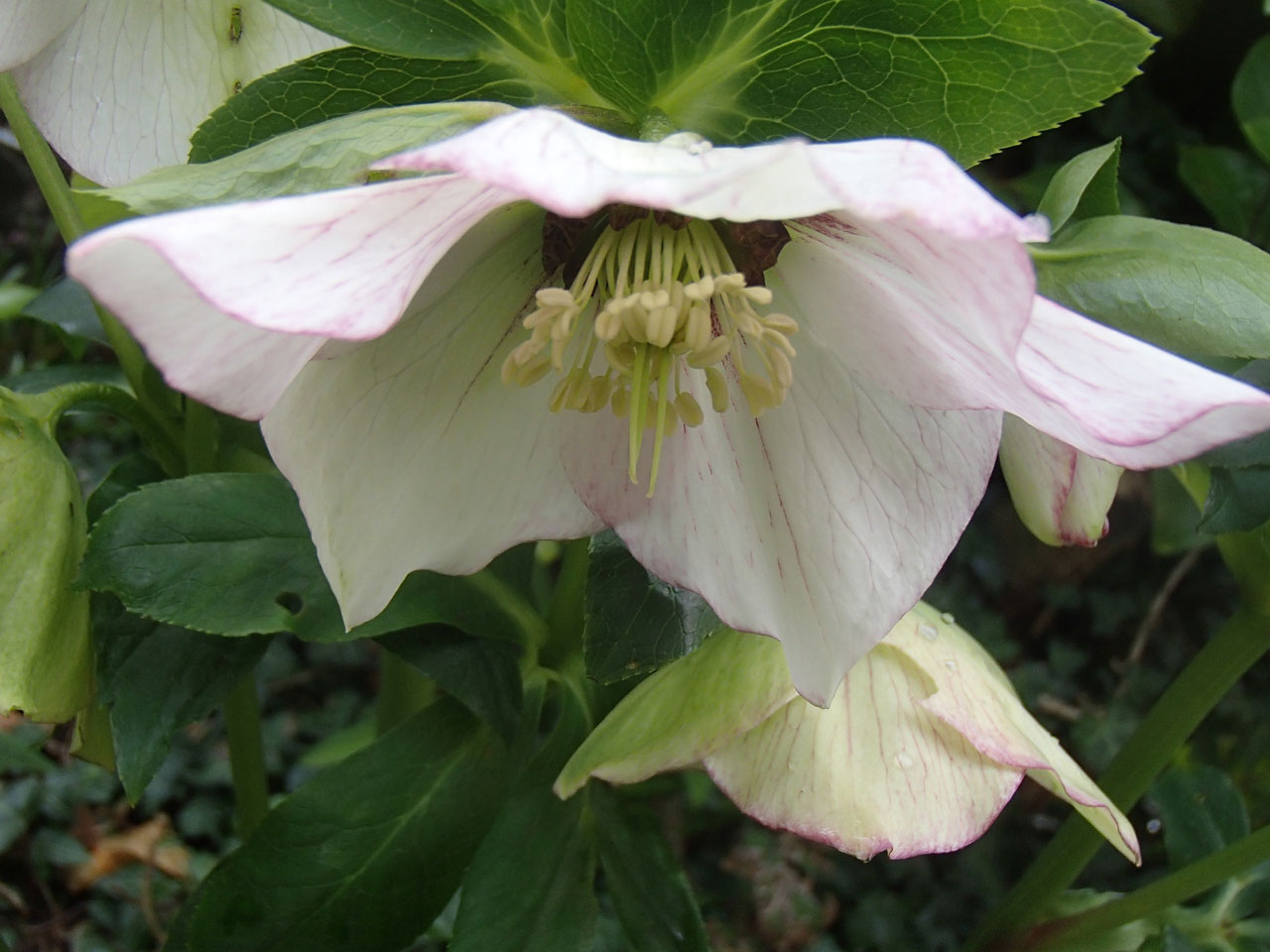 Older
Newer
Filling up nicely (older)
Can you see where I’ve been? (newer)