So much for getting back to posting regularly – and to never getting more than a week behind on my blog reading. Ho hum. On the bright side, I have been managing to get more gardening done than last year. Lots of weeding. Quite a lot of seed sowing. A lot of the weeding has been in the front garden, and it is by no means over! The “pointy end” – or “bow end” as TNG calls it – still resembles an abandoned building site more than a cared-for garden. I am gradually working my way forwards, towards the sea, removing weeds and attempting to replace them with plants.

I’ll post about progress in the fence border another time, today I am celebrating what I hope is progress in the wall border. I say “hope” because I’ve not had much luck with this border. A lot of plants have died. The soil is free-draining, almost sandy in places, and apart from one small area near the driveway, basks in full sun. It also basks – if that is the word – in the northerly gales during the winter, and the soil takes longer to warm up, but it should be perfect for plants like salvias, agastache, Phlomis ‘Amazone’. All of which have turned up their toes. I am staring at the stump of last year’s wonderful Agastache ‘Blackadder’ willing it to burst into life, hoping it is just a little tardy.

The ‘vision’ for the length of the border that runs alongside the wall was for a drift of Perovskia ‘Blue Spire’ with accents of swordlike leaves from Eryngium yuccifolium, shots of blue from Echinops ritro, edged with lamb’s ears  and lifted by – well, take your pick from the list of now dead plants earlier. I do love the combination of perovskia and Eryngium yuccifolium. 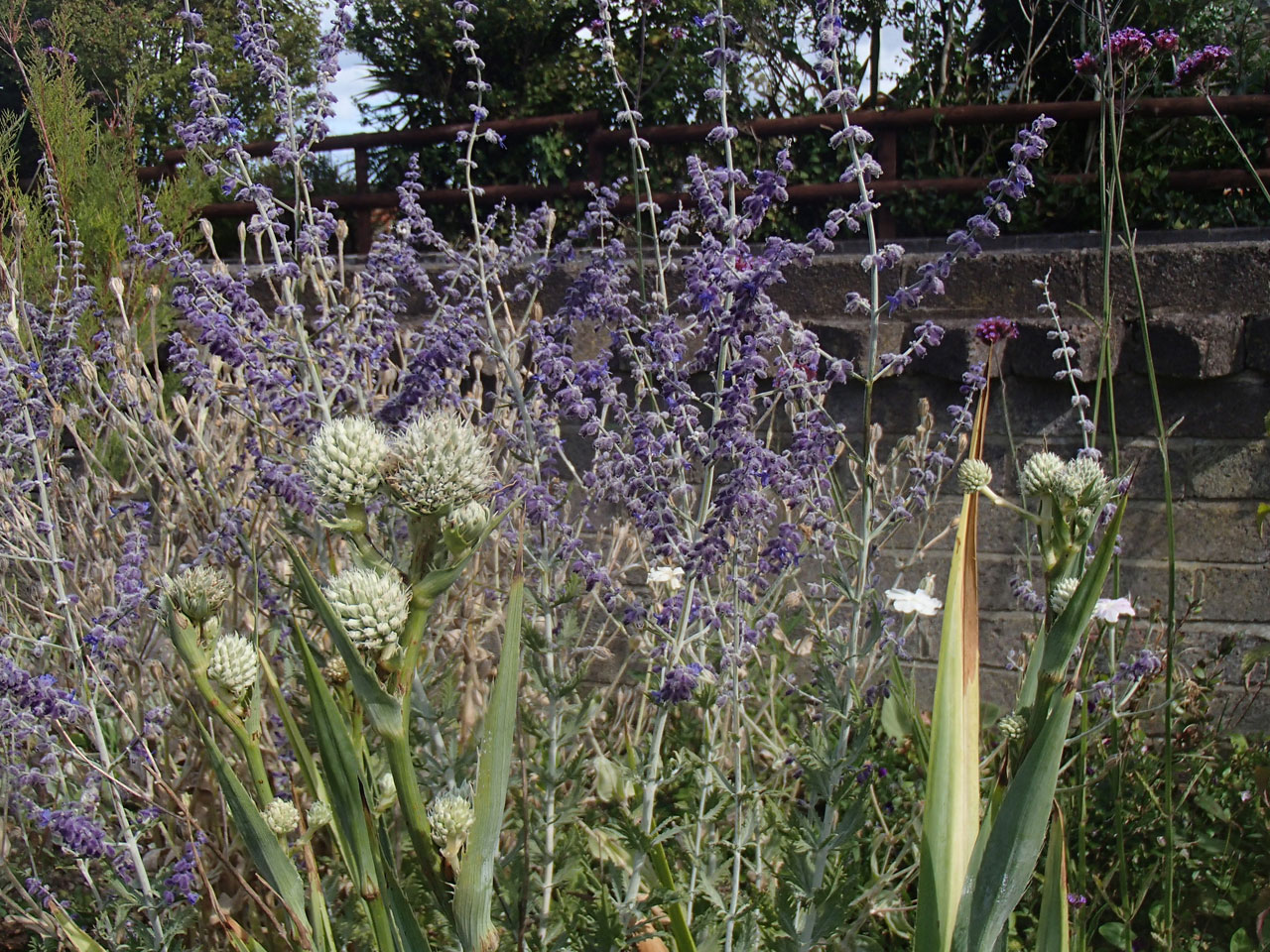 Both plants thrive here, for the most part, though I have had problems with establishing smaller perovskia plants. I’ve also found that the eryngium is less reliably evergreen than I had hoped, so that it doesn’t provide me with the winter structure I had planned for. I’ve also found that  Helictotrichon sempervirens, a wonderful evergreen – everblue? – grass loves the conditions, but I planted it too far back in the border for it to have much impact. I had been intending to use annuals and the ever-present lychnis to fill the border while I carefully experimented with accent plants, but this is quite labour intensive, and I have a weed problem. Amongst the usual suspects – hairy bittercress, rosebay willow herb, that thing with bright red stems and rosettes of quite pretty leaves that spreads like crazy – I have this: 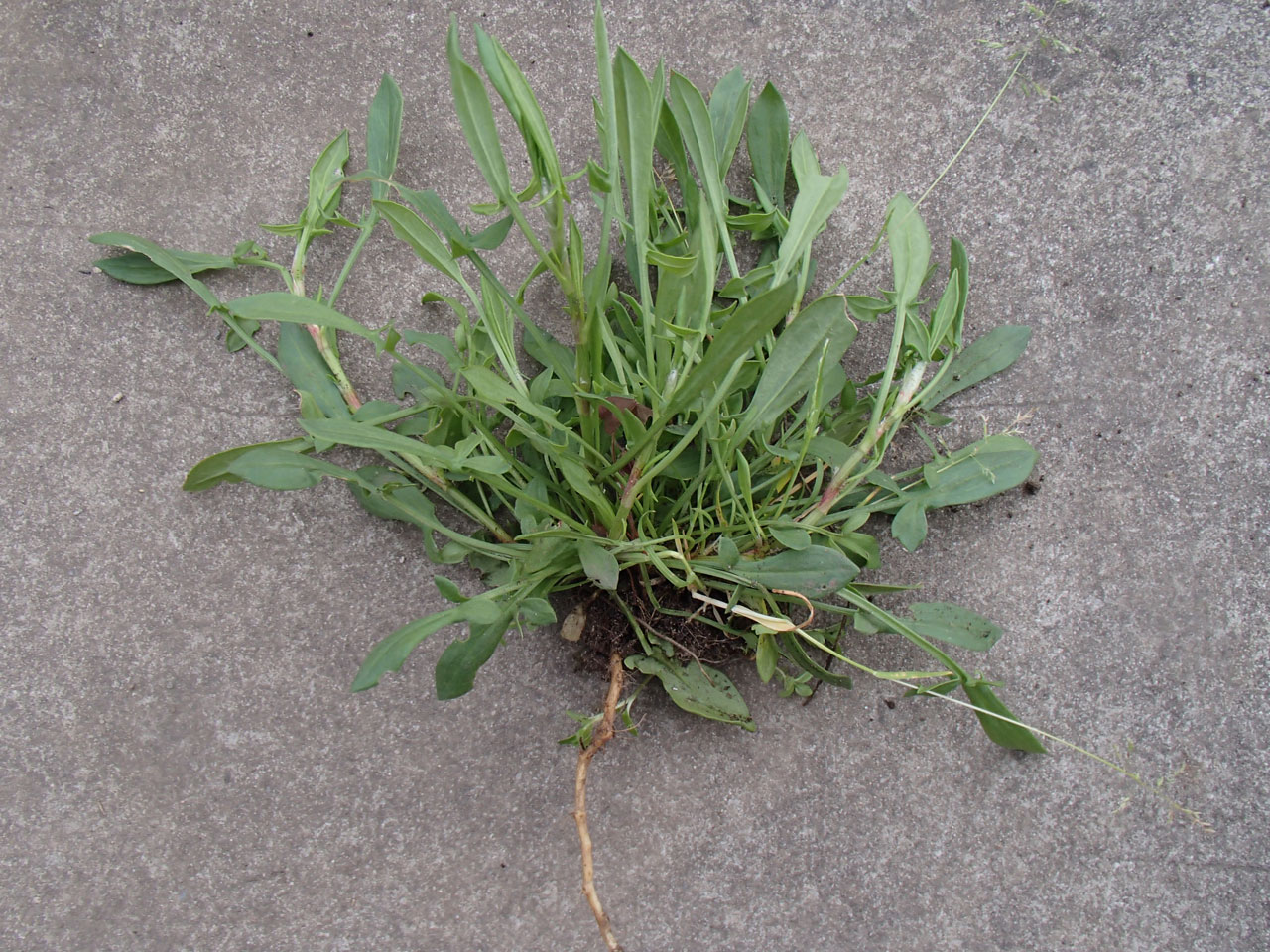 It spreads by underground runners and quickly chokes itself around and through other plants. The networks of plantlets can be vast: 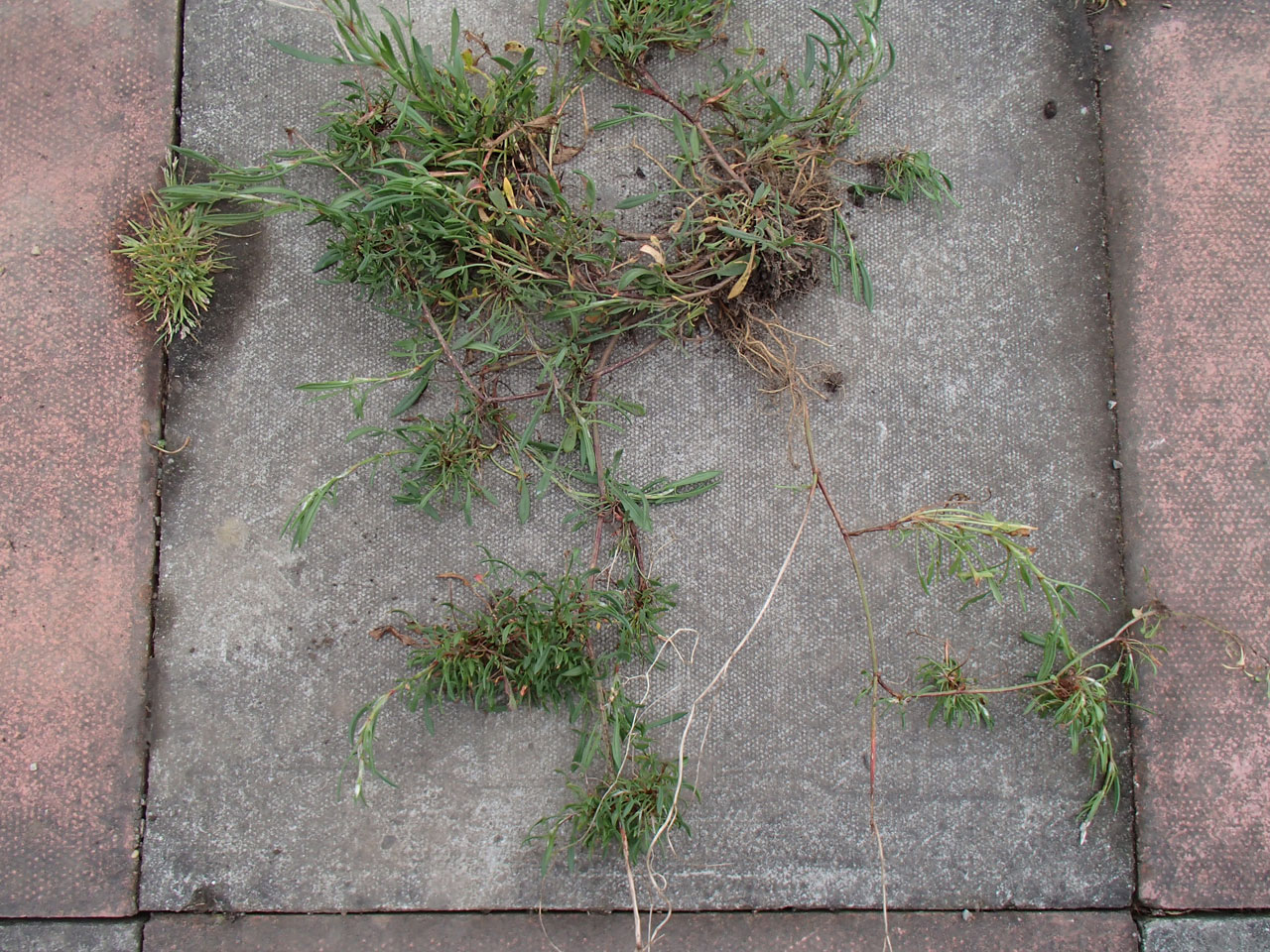 For ages I didn’t know what it was, but the lovely people over at the All Horts group on Facebook identified it for me as red sorrel. And paradoxically it might have given me the answer as to why some plants are hating that border. Red Sorrel apparently thrives on soil with poor drainage and low nitrogen. I’m not sure I believe the poor drainage, but poor nitrogen might explain a few things. The bizarre thing is that sorrel prefers acidic soil, and mine tests – and behaves – as neutral to alkaline. Time to get that testing kit out again, and work out the best way of improving the nitrogen levels.

In the meant time, I have been pondering how to plant the border more densely (to help suppress weeds), including some plants to add evergreen structure over winter, and to do this as cost-effectively as possible given I don’t have time to wait for home sown perennials to be large enough this year. So, I have moved the blue grasses closer to the front, divided and consolidated the lamb’s ears to make a run of edging, added lavendar ‘Hidcote’ behind the lamb’s ears punctuated by the blue grasses, and chanced my arm with a trio of Salvia ‘Caradonna’. I’ve also planted three Japanese anenomes (‘Honorine Jobert’) towards the back in amongst the Verbena bonariensis, and inspired by several photographs of pale yellow flowers growing with perovskia, planted three Sisyrinchium striatum. This is doing really well further up the garden, but once I have finished all the planting I will be mulching thickly with compost. Hopefully this will start to improve the soil. The only problem is that most of the plants are still barely out of winter dormancy, so you can see where I have been, but mainly because you tell where I have watered. I had been going to sow some poppies in amongst the other plants, but I think mulching is more important. 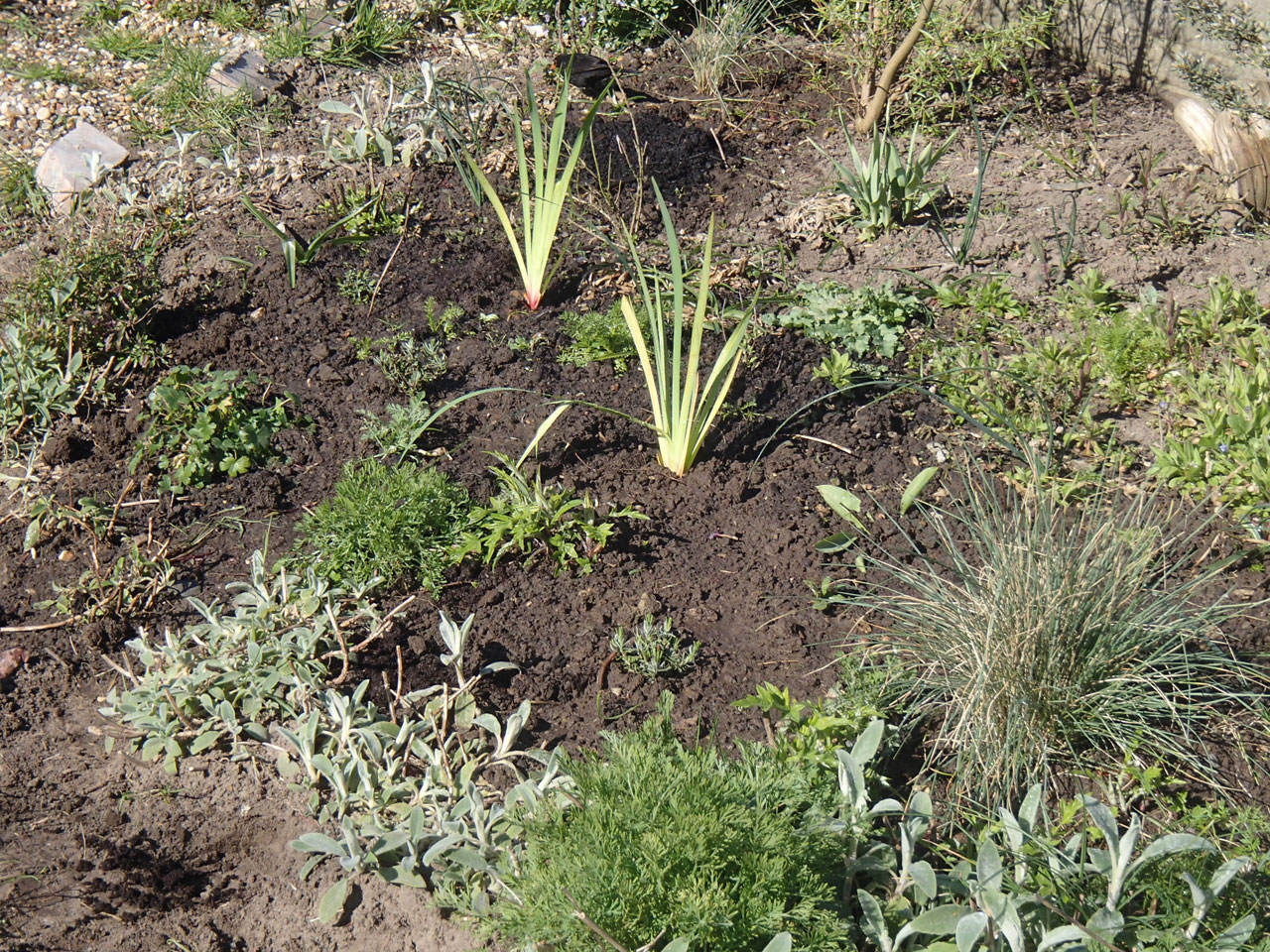 This is the sea end of the wall border. You can see the sisyrinchium, some of the lam’s ears and a blue grass, but the salvias, existing echinops and new lavendar plants are less easy to spot. You might notice I had a little friend while I was gardening, a blackbird. 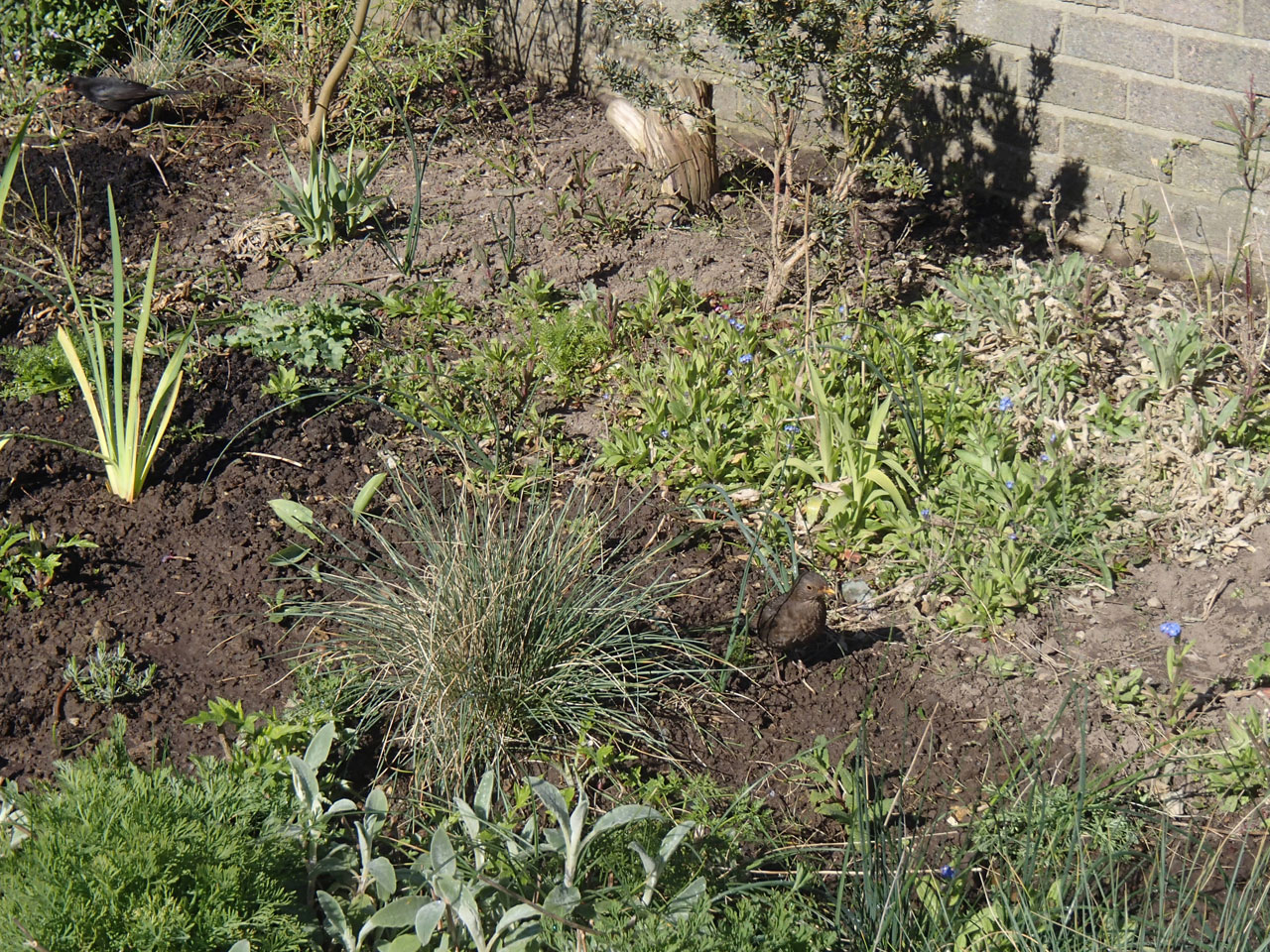 He was accompanied by his better half. They were so eager to get at the worms and other bugs I was turning over for them while I worked that they got very brave, risking being hit by low flying plant pots to get at them. They must be nesting nearby, could they have young already? They were certainly cramming their beaks with lots of wriggly things rather than eating as they foraged. 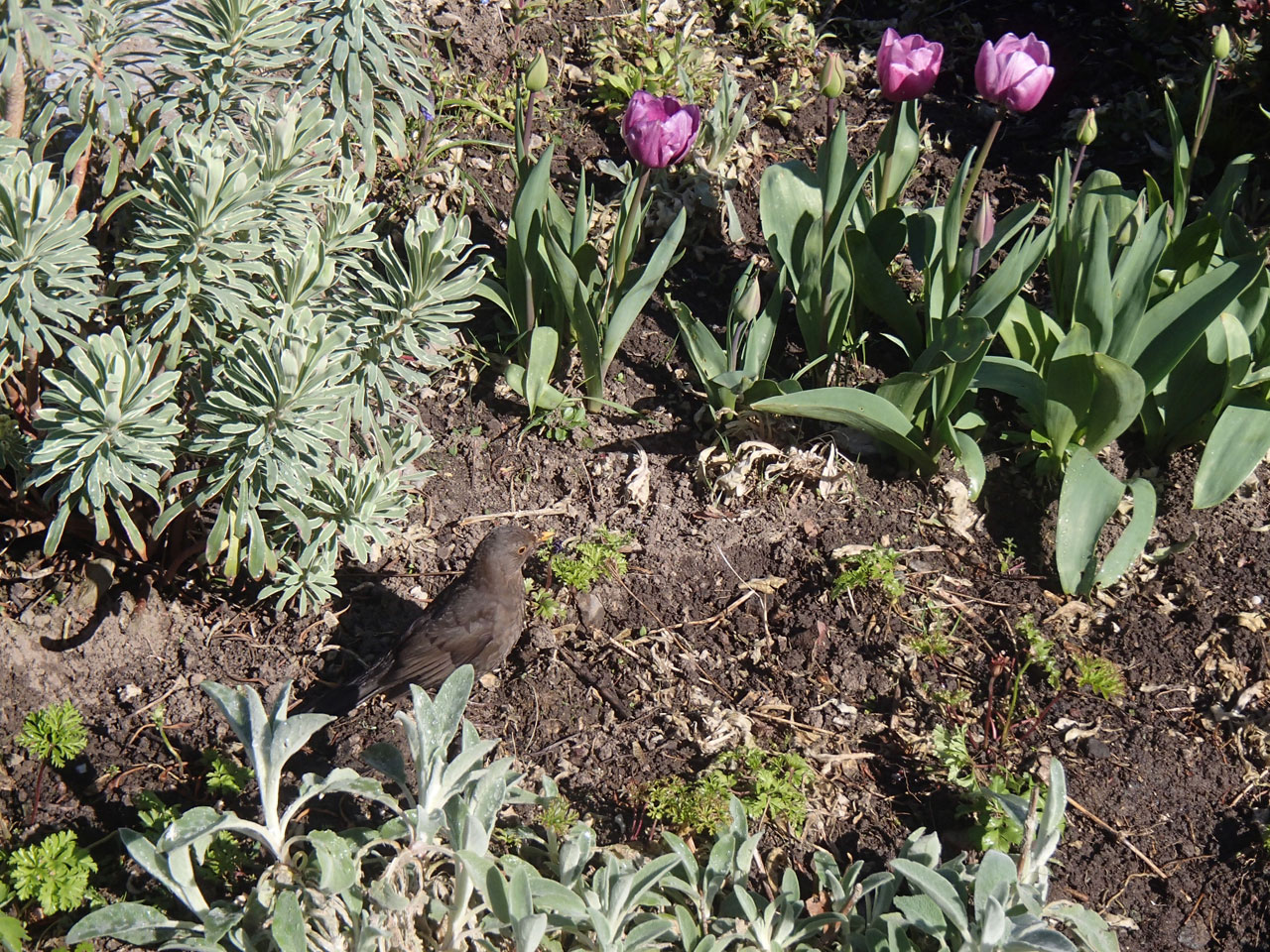 Further up the border towards the house I was really happy to see the emerging Anenome coronaria, they were planted very late on the year before last, and did virtually nothing last year, so I presumed they hated the soil too. Apparently not true. They do create a dilemma though, what to plant in amongst them that won’t stop them flowering but won’t leave the soil bare. I have some Geranium ‘Roxanne’ that I could relocate that might do the trick. 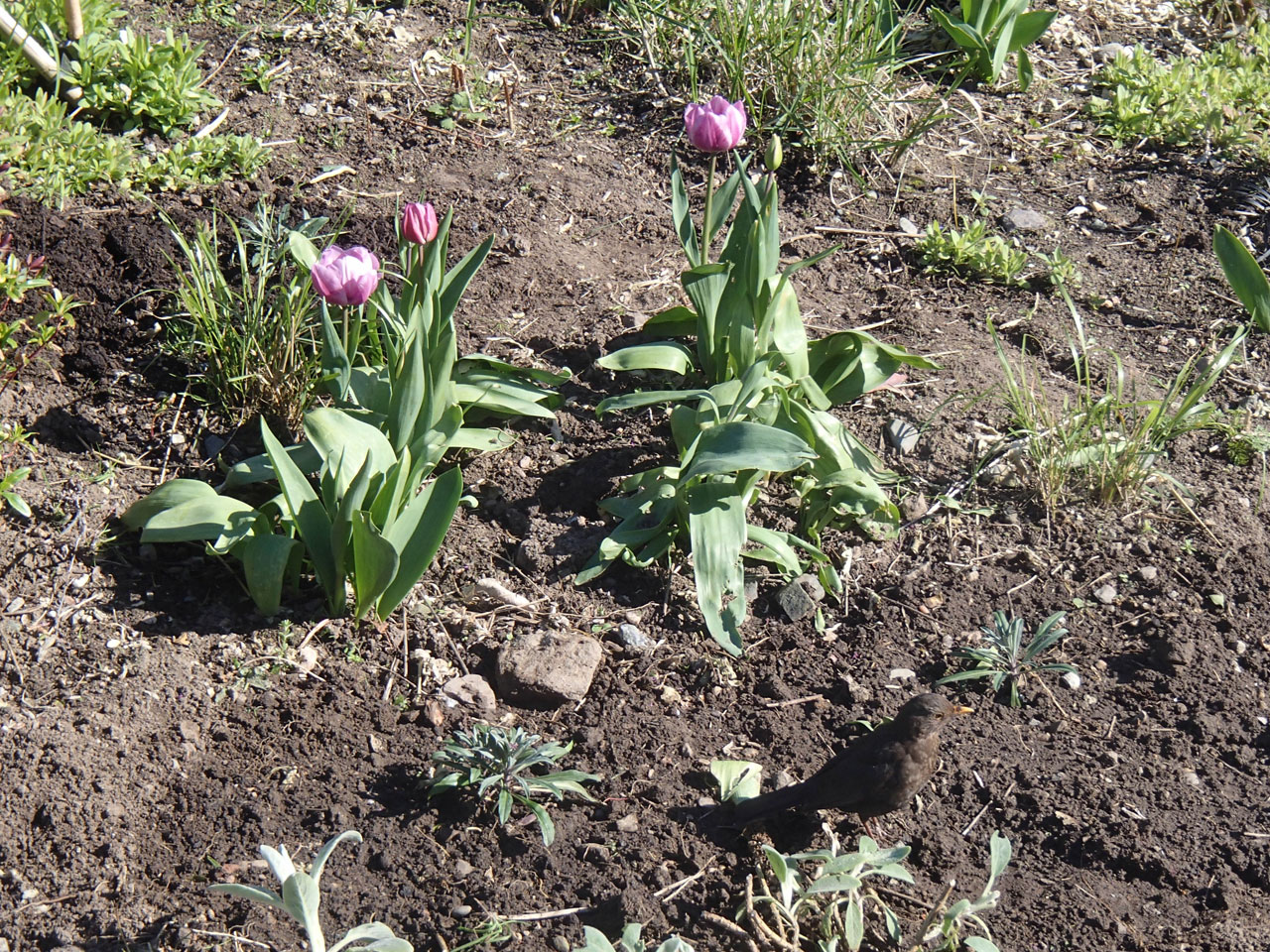 The tulips aren’t as good this year, I need to add more in the Autumn, but I have planted new Erysium Bowle’s Mauve in front of them and one behind, next to the hebe. I have learnt the hard way that I need to trim the erysium back each year, just like the lavendars, to keep them from becoming too woody too soon, so hopefully this will mean they don’t swamp the tulips…

One thing I am a little concerned about is whether the flower colour of the Persicaria affinis ‘Donald Lowndes’ will clash with the ‘Bowle’s Mauve’ – the flowers start off pale pink, which will be perfect, but they go a reddish-pink as they age. I am using the persicaria as ground cover around the hebe up to one side of the mini birch grove, so I guess time will tell. I may have to move one of them to the other side of the hebe. I hadn’t originally planned on them being so close to one another, but as always, when I came to the actual planting, I changed my mind.

There are still some quite large areas of bare soil where I have removed plants – and weeds – but I have cerinthe and various annuals for this area until I can firm up my plans.

So, progress. But I am now having my usual crisis of confidence. Will the plants all grow, given that apparently I have such terrible soil. How could I not notice that the soil was so terrible. Why did I ever think that X and Y would look good together. Ask me in a couple of months, once everything has been mulched and has bedded in a little. On the plus side, lifting, dividing and moving so many plants means I have pulled out an awful lot of red sorrel… And at least I now have a name for my latest nemesis.