OK, so June and July disappeared in a flurry of activity in my other life as a web designer and frankly it is a miracle I didn’t kill off all the tomatoes. I did kill off the courgettes, which although delicious succumbed to powdery mildew far too early. But I’ve finally had a little time to try and re-engage with the garden and start thinking ahead to next year, and figured getting an “End Of Month” posting together would force me to gather my thoughts.

I started in March talking about needing more colour in my pond border, better distributed through the year. Some things have worked really well. From certain angles the border is full of colour. The brighter red dots of colour are from Zinnia ‘Red Spider’, and next year I hope to use Silene ‘Jack Flash’ to achieve something similar. 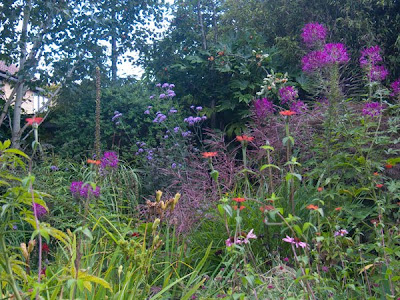 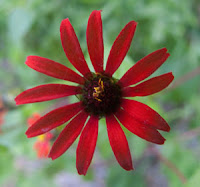 The absurd deep purple spiky flowers are Cleome ‘Violet Queen’, which supposedly grows to 1.2m. Mine got over excited and are more than 1.5m, and stupidly out of scale. Next year I will grow them in the Dahlia border at the back, but I couldn’t bring myself to expel them, even if they do cant wildly after a strong wind. 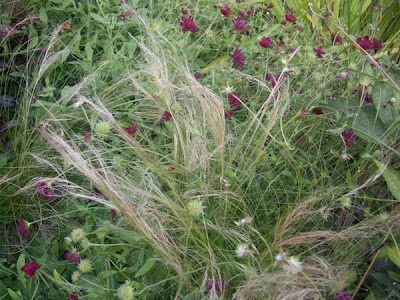 This area to the right of the pond is the one I am most happy with. Back in April I dug out the Lysimachia, improved the drainage and planted up with home sown Stipa tenuissima, Echniacea purpurea, Kanutia macedonica, and the lone Scabious ‘Black Cat’ to survive. The ‘Red Spider’ was added later, along with the Cleome. It all looks rather matted and tangled, but alive with insects and has kept the colour going all year. 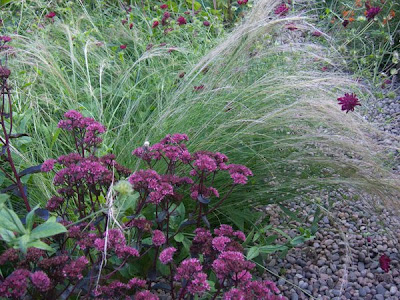 The rescued Sedum is blissfully happy, glowing a wonderful deep purple, mobbed by bees and hoverflies. I love the way it contrasts with the Stipa tenuissima. 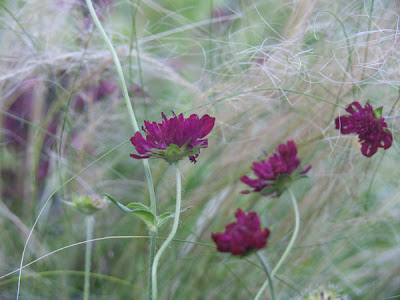 The real revelation has been the Kanutia macedonica. They were tiny when I planted them, barely filling a 3cm pot, but I got impatient (big surprise). They started flowering in early May, and haven’t stopped. They have also filled out and spilled out to the extent that I may have to divide them to give everything else a fair chance next year. The Echinacea, in particular, will need more room, and hopefully flower more. Back in June when I was too busy to post there were Allium sphearocephalum rearing up in amongst the grasses and Knautia, which was magical.

Further round the border it is a less happy story. 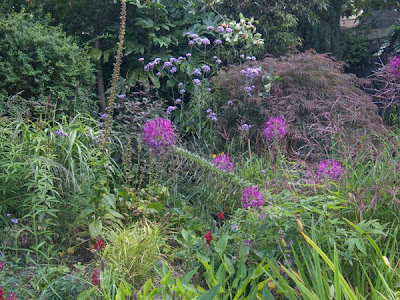 Leaving aside the absurd Leaning Tower of Cleome, the Verbena bonariensis is doing decent enough job, though as ever I want more to give a sense of an enveloping transparent backdrop if that isn’t a complete contradiction. The foxgloves were wonderful but I only had crimson Snapdragons to replace them with, and some very pretty pale purple Monardas which you can’t see in this picture but which, quite frankly, lack punch. This was fine when my goal was an elegant, tasteful palette of whites and lavenders set off by the structural forms of grasses, but hey, things change and now I crave colour and vibrancy. 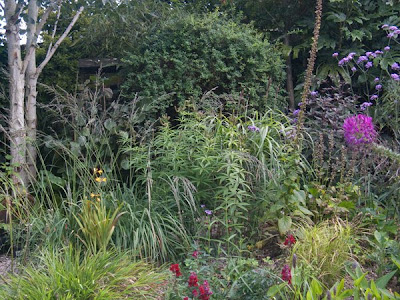 The left hand side is slightly better, not in terms of colour, but because the leaves of the Veronicastrum are so wonderfully structural. The little splash of golden yellow is a crocosmia in a pot, plonked there to help me colour plan for next year. I am going to try Rudbeckia and Achillea for oranges, yellows and reds, plus Aconitum and Nepeta for deep blue. I’d also like to try a Sanguisorba to continue the theme of red buttons begun by the Knautia – too much shade here for the Knautia to thrive. I also want to try some geums nearer the front for an outrageous splash of colour. To make room for all this I will be taking out some of the grasses. I also need something better to balance the Veronicastrum at the end of the border. No doubt I will sow too many seeds, lose the ones I most want, forget my plan, plant too closely, and have to re-do most of it again this time next year. Then again, that’s what I love about gardening, the constant learning, the experiments, failed and successful, the expectation, sometimes fulfilled, sometimes not. And a great antidote to so much else in life. Time to order those seeds…