Last week, with the approach of the first Tree Following posts of the new year, I set out in bright winter sunshine to select my new tree. The fact that I am now in danger of missing the window demonstrates the all-enveloping nature of being self employed! I remember, when working very long hours for a big company, how important weekends became. Evenings too, when I wasn’t too knackered to do anything other than collapse in front of the tv. Weekends?! What are they?! I am struggling to balance the need to get this new venture up and running with the need to remember to look after myself, feed my soul etc. So apologies for my lack of visits to and comments on your blogs, I am working on it, honest, and I miss you…

I digress. I loved following my hawthorn last year, far more than I thought I would. It forced me to get up close and personal to a tree that otherwise I tended to just ignore. The temptation to pick another tree in my garden for this year was enormous. So convenient, and I planted 7 trees last year, any of which would make an interesting candidate.

Instead I decided to try and use this as an opportunity to encourage me to get out and about, despite the tendency to bury myself in work. TNG and I started doing regular walks together in an attempt to take achieving a base level of fitness seriously. We kill multiple birds with a single stone by using this as an opportunity to talk about business-related things away from the computer screens and enormous ‘To Do’ lists, so adding in tree following to our normal cliff top walk isn’t going to work. So I decided to pick a tree along the river valley instead.

The River Wygyr runs through the village to the sea – I did a post about the old brickworks that lie further up the valley not long after we moved here, in fact almost exactly two years to the day that I took these photographs, and in very similar weather. It is a beautiful area, much loved by dog walkers as there is a network of concrete paths navigable in even the worst weather. It is also an area I don’t tend to visit much, the beach and cliffs are a much more obvious attraction. Choosing a tree from the river valley will make sure I visit regularly and get to know the whole area through the seasons. So off I set. 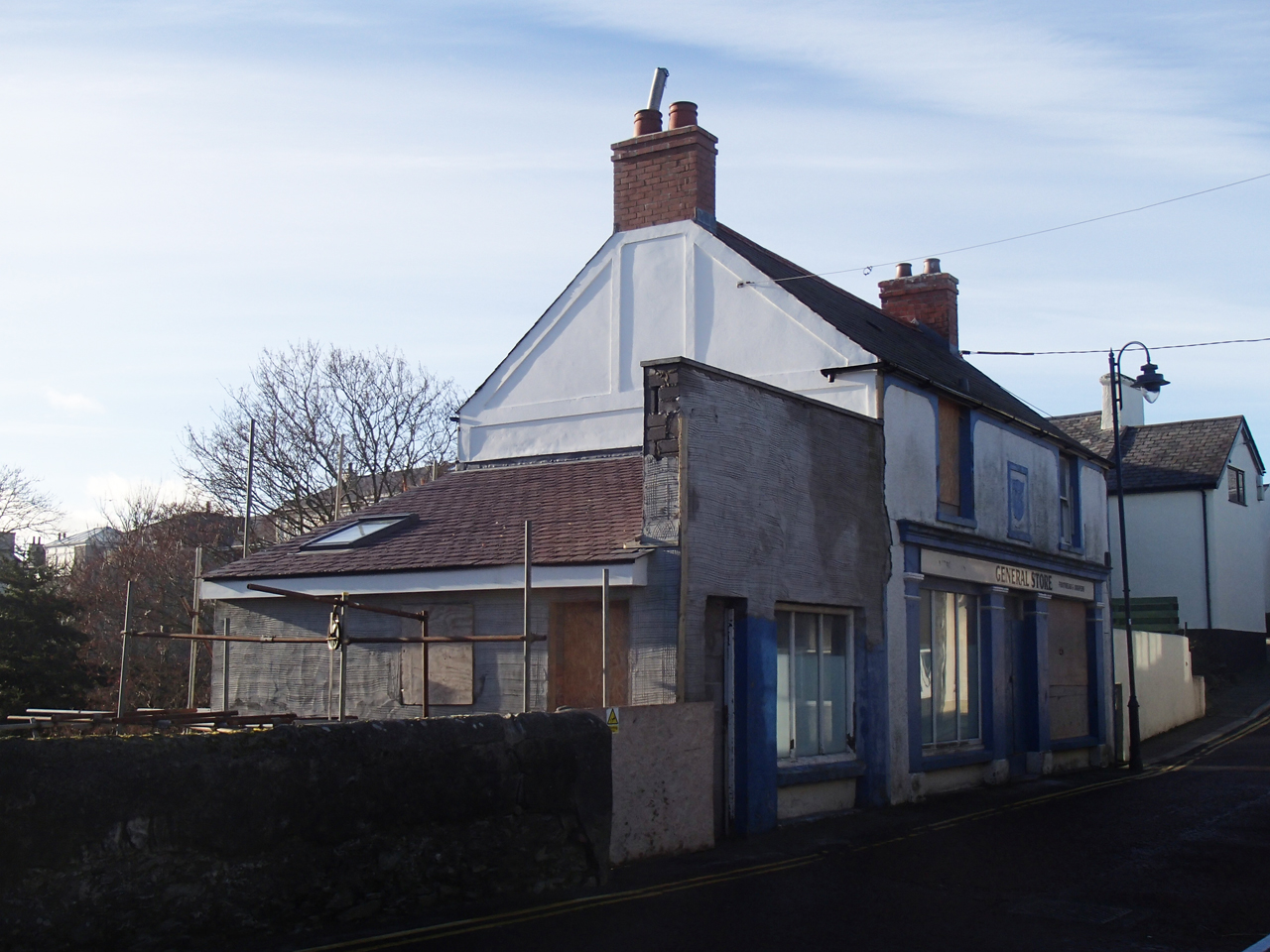 The route takes me past the local beach and harbour, up to the main road bridge, giving me an opportunity to check out the progress on the old shop that is slowly being refurbished. I have no idea whether this will be another shop, I rather assume not, the location leaves a lot to be desired (no easy parking) and there are several empty shop units on the High Street as it is. I assume it will be a house with a rather fine view up the river when it is finished. 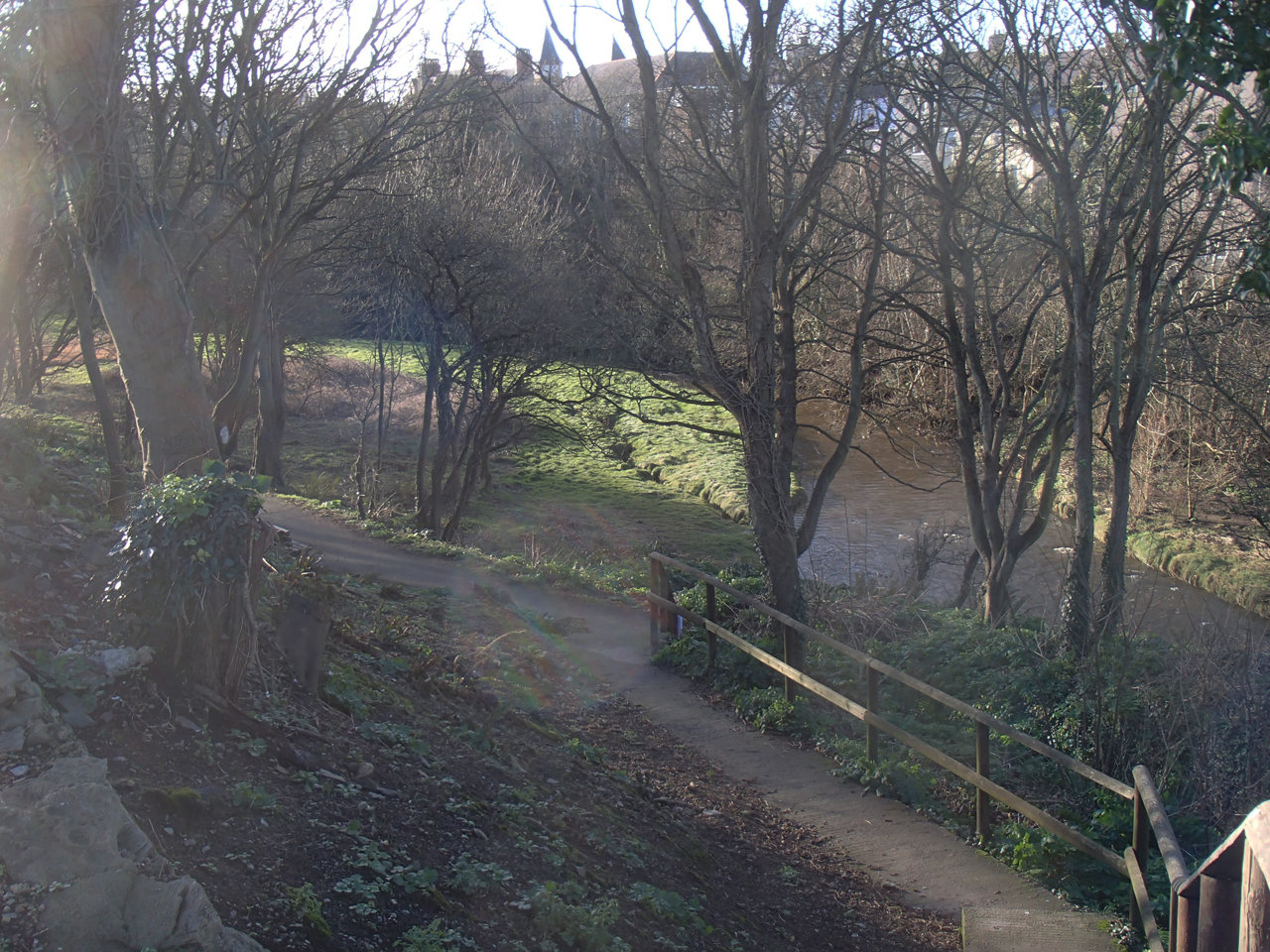 A steep set of steps lead from the road level down to the river, and already I was feeling good about my choice of location. The ‘Cemaes in Bloom’ group, together with other volunteers, maintain the river valley area and have planted hundreds of bulbs. There are already signs of the snowdrops to come. 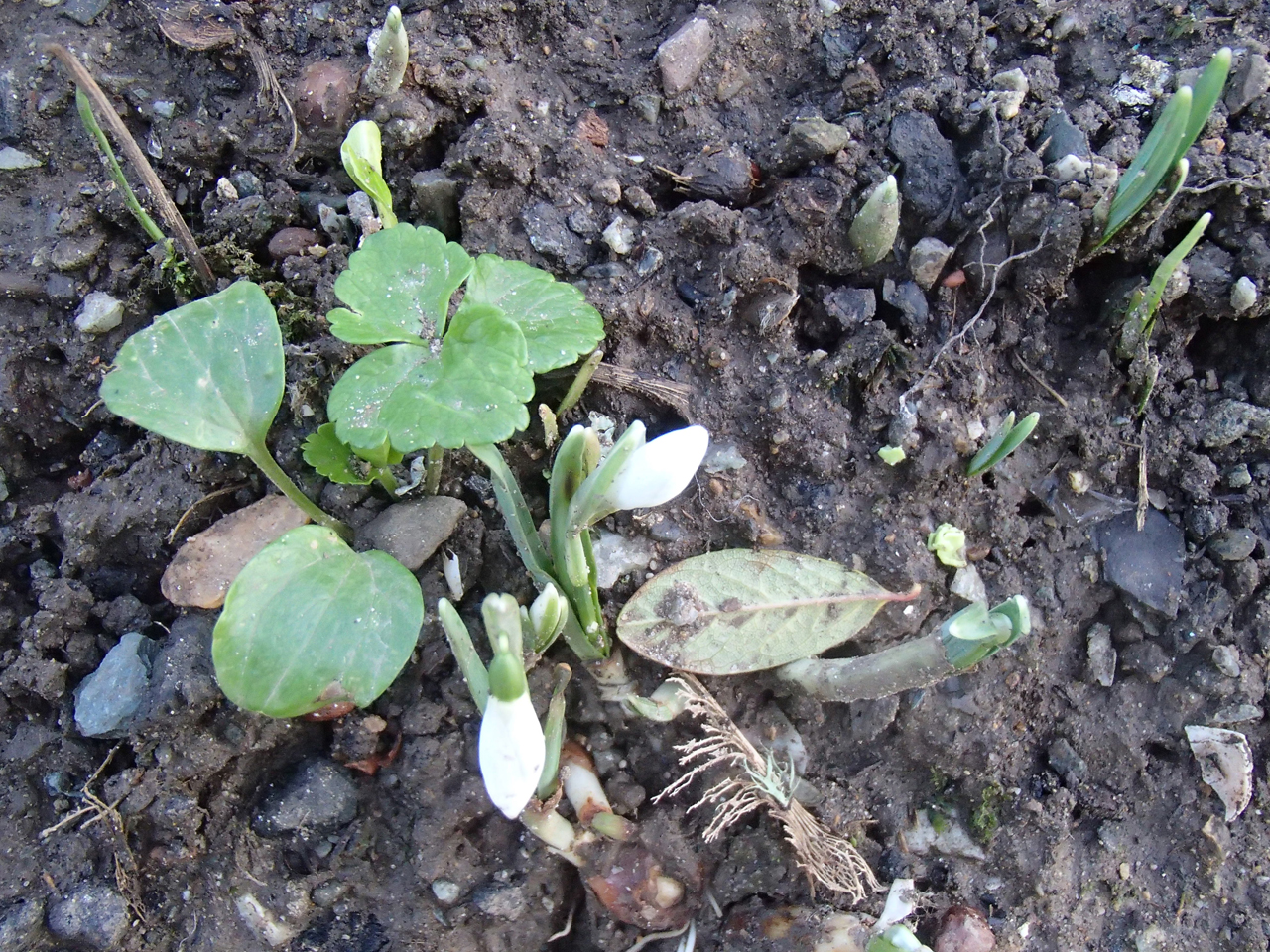 And after the snowdrops, daffodils will turn the slope golden. 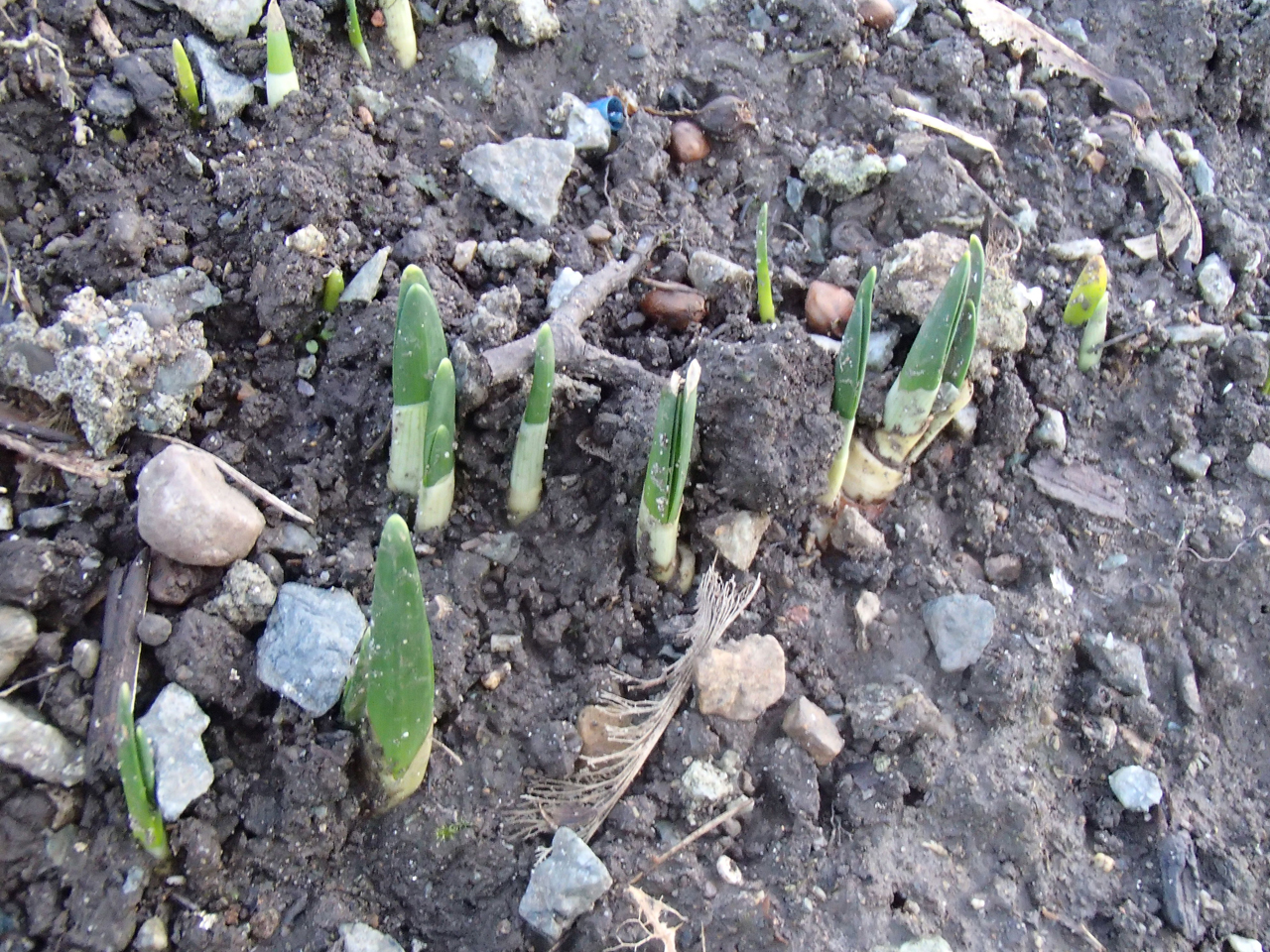 As well as the ferns, Alexanders and bulbs there are lots of saplings and the occasional tree stump. 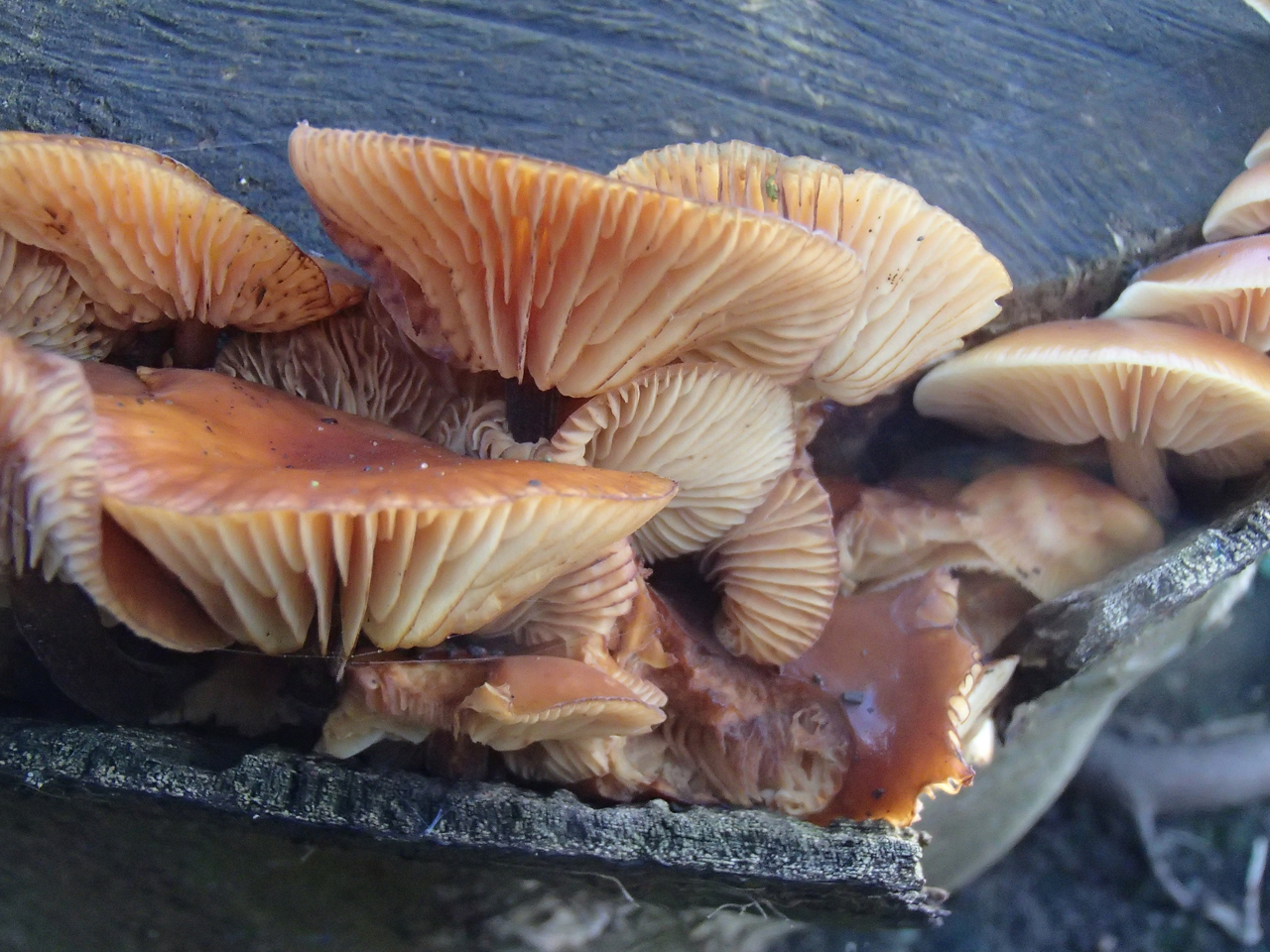 Plenty to distract the eye, but looking back up the slope one can’t help but be impressed at the dedication required to clear and plant such a steep area – with a river waiting at the bottom! 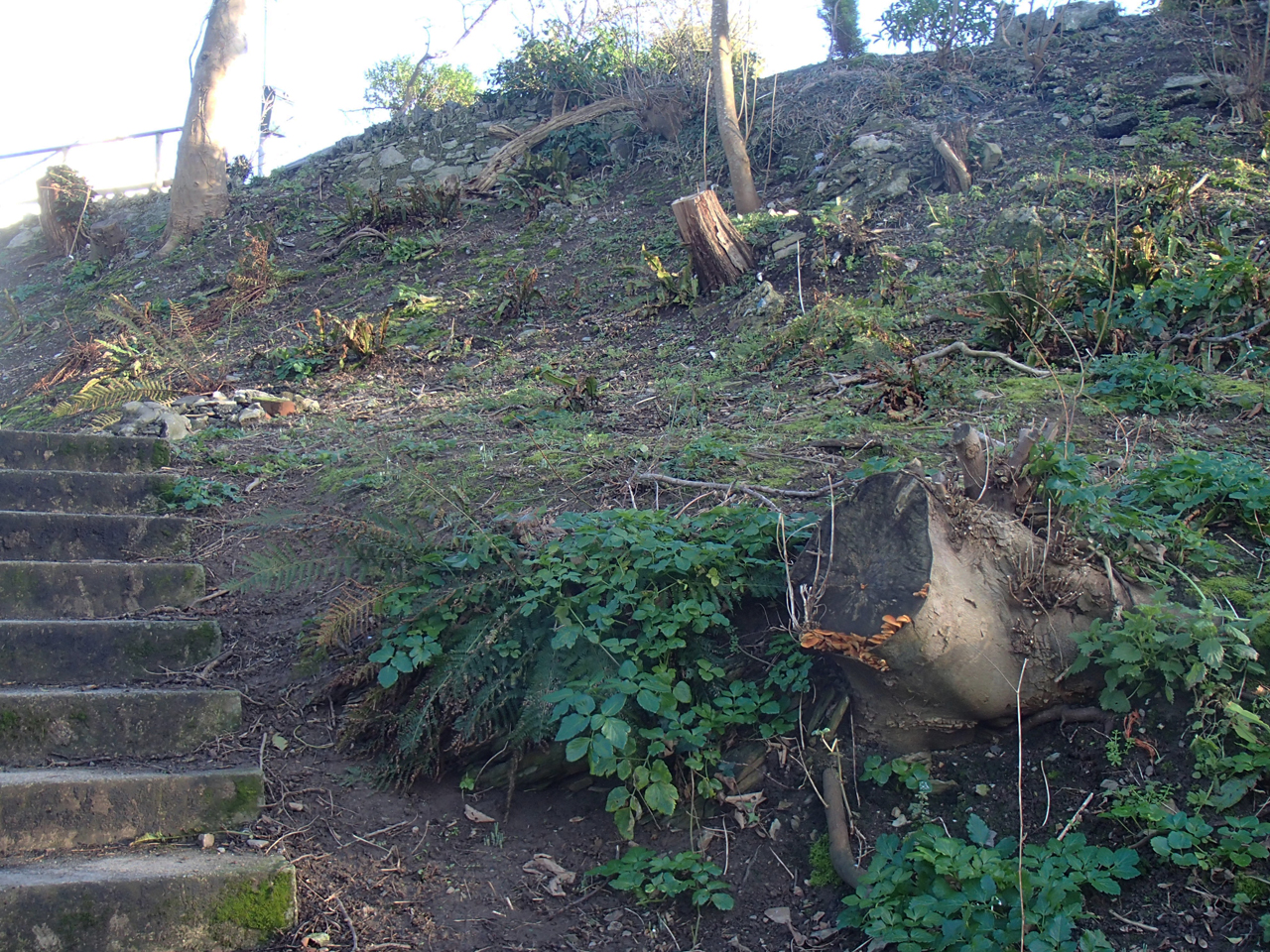 But I was on the hunt for a tree. I wanted one with character, in interesting surroundings, and had one very obvious candidate in mind. 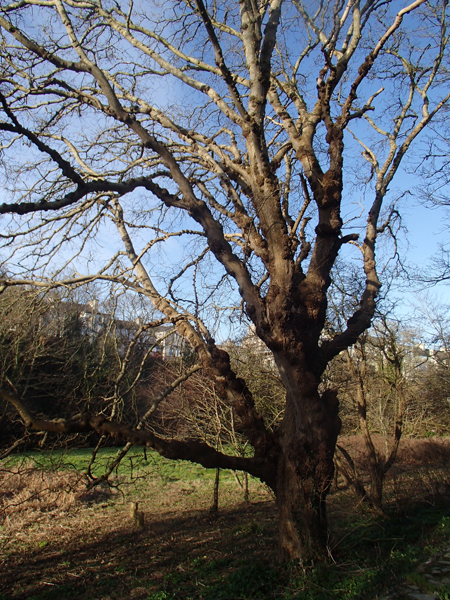 I have no idea what kind of tree this is, but it stands like a sentinel by the side of the path just before it divides, offering you the choice of crossing over the river via a footbridge of continuing on. It’s a wonderful tree, but the river has bent away from the path at this point, and I wanted to pick a tree that was right by the river. Something more like this, perhaps. 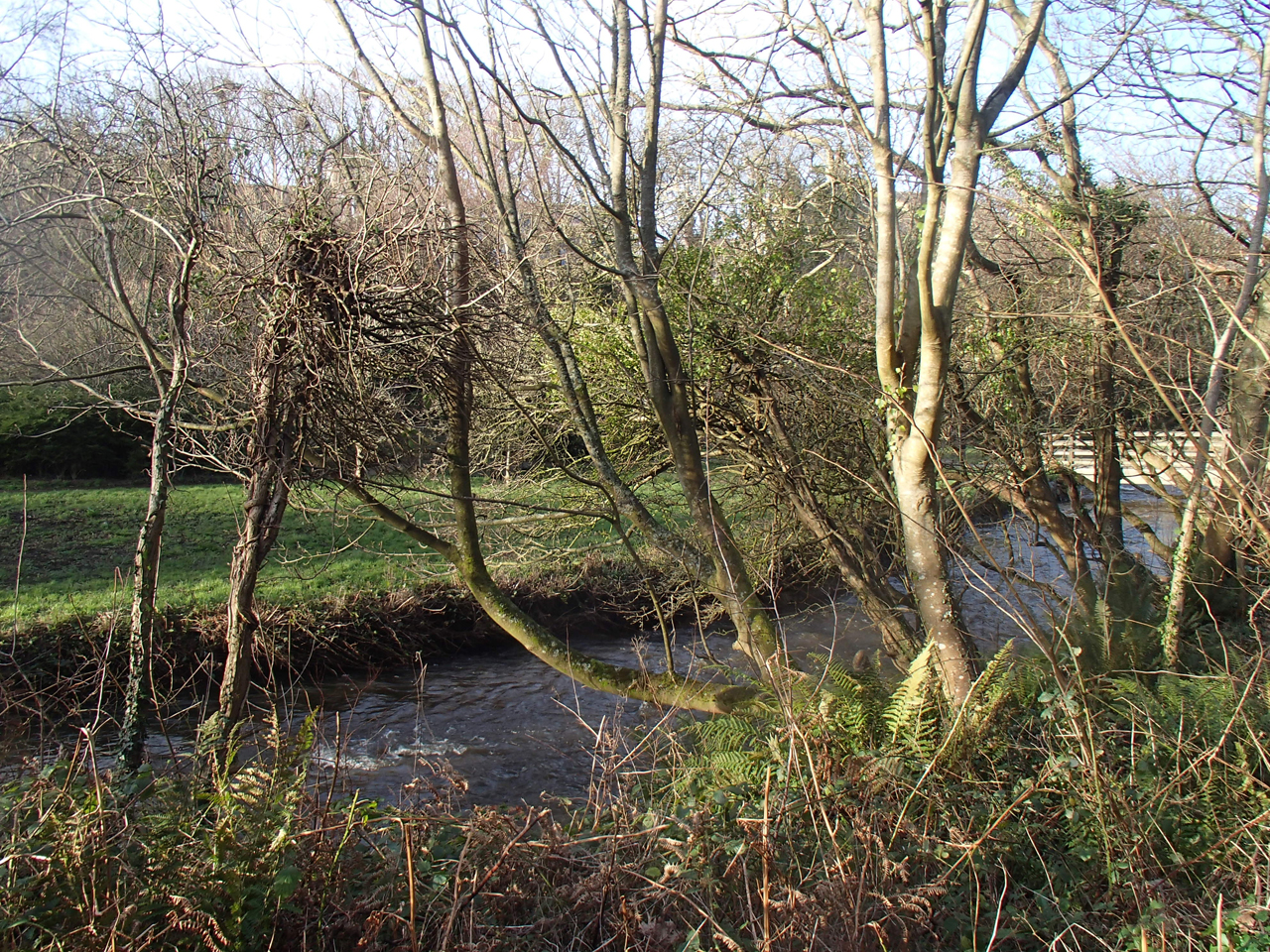 The bank here is steep, so getting to the foot of the tree would be tricky, and anyway, it didn’t strike me as having the level of character I was after. My hawthorn is a tough act to follow. 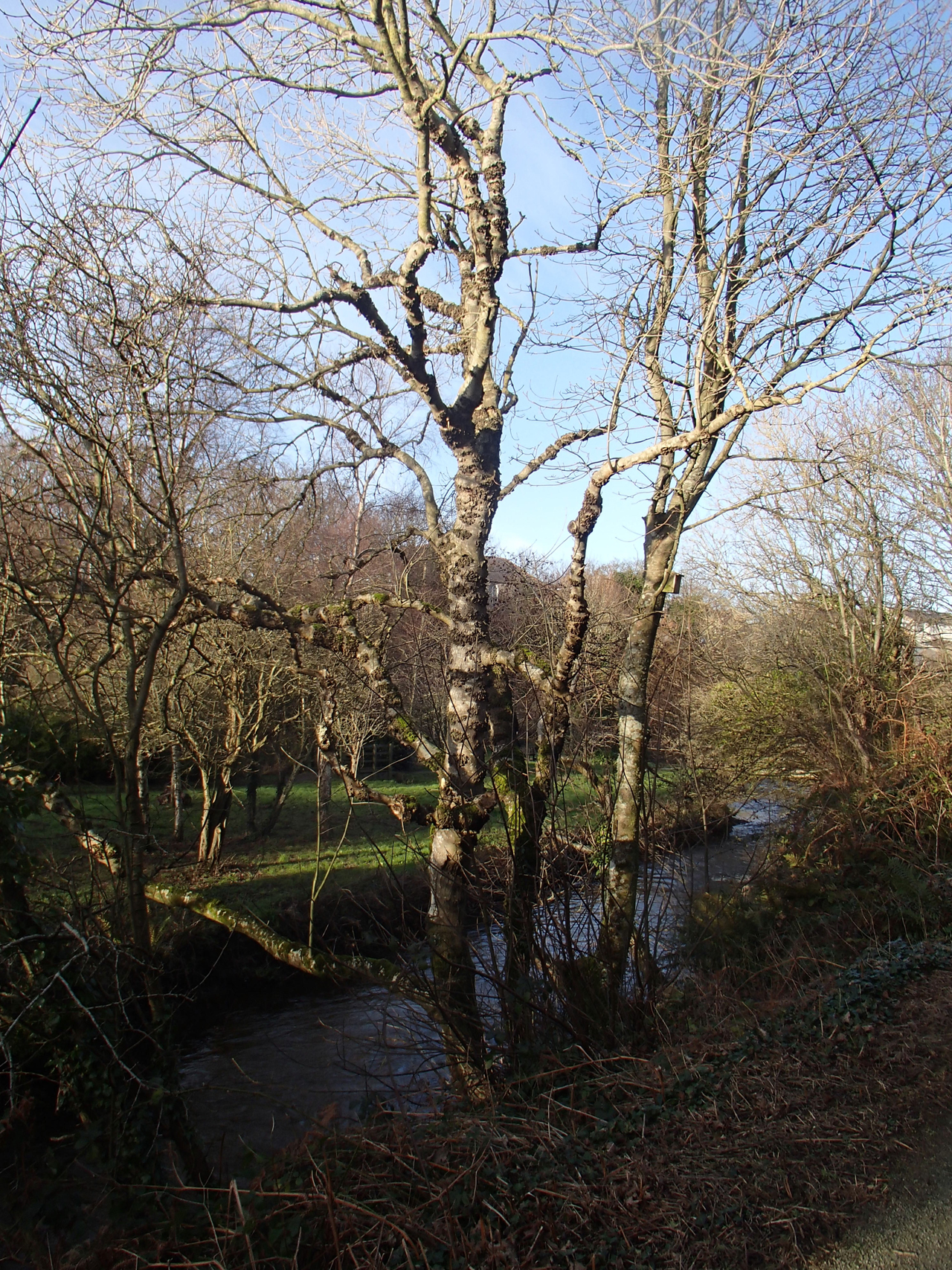 This was more the kind of thing I had in mind. Leaning out over the river, an interesting shape, though it wasn’t entirely clear whether this was one, two or three trees. 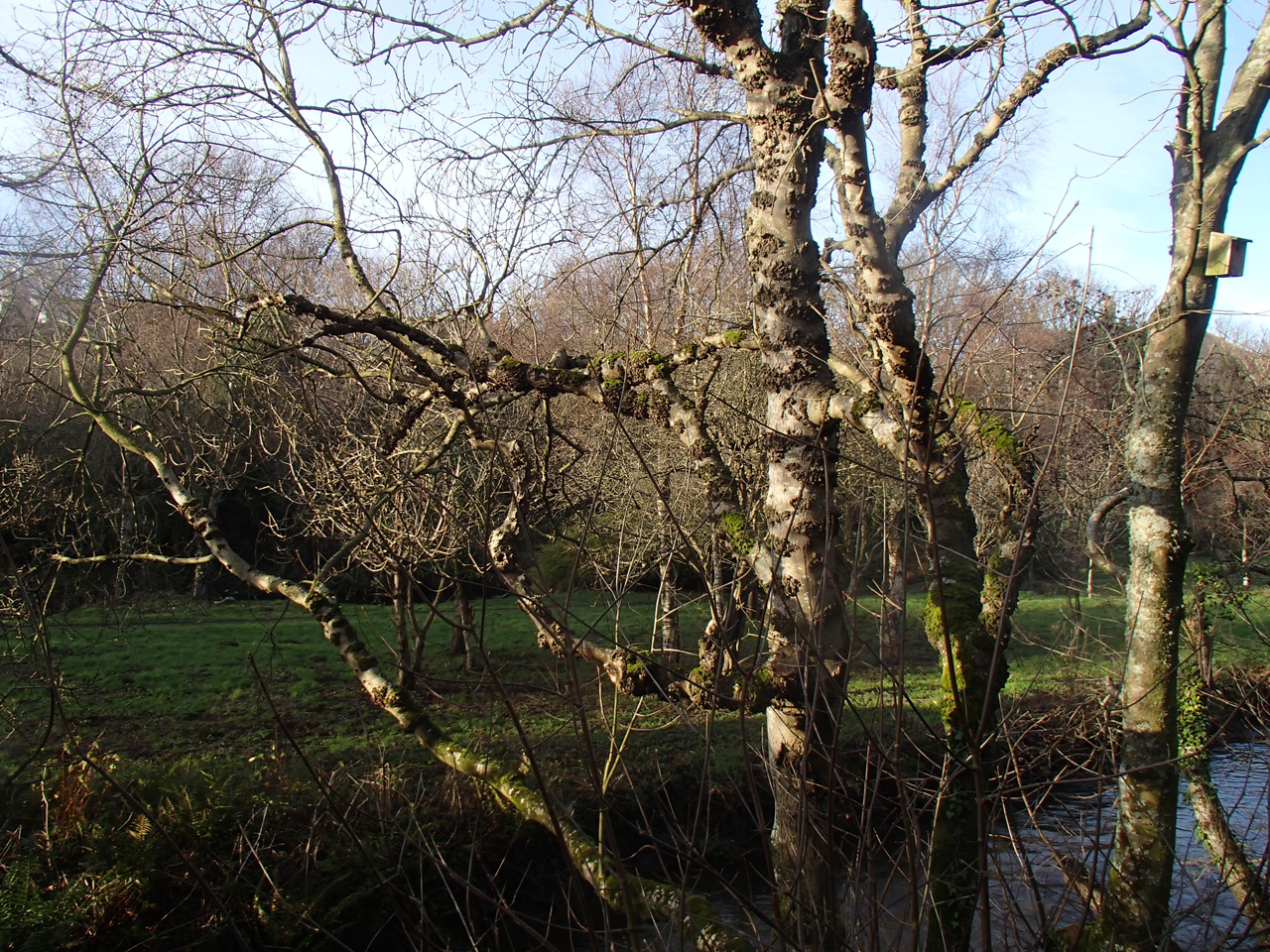 It seems to have the same knobbly growths that my magnificent sentinel had, on a younger body. And there is the bonus of a nest box. Not to mention there is plenty of lichen and moss on the trunks to add interest when there are no leaves. A definite possibility. 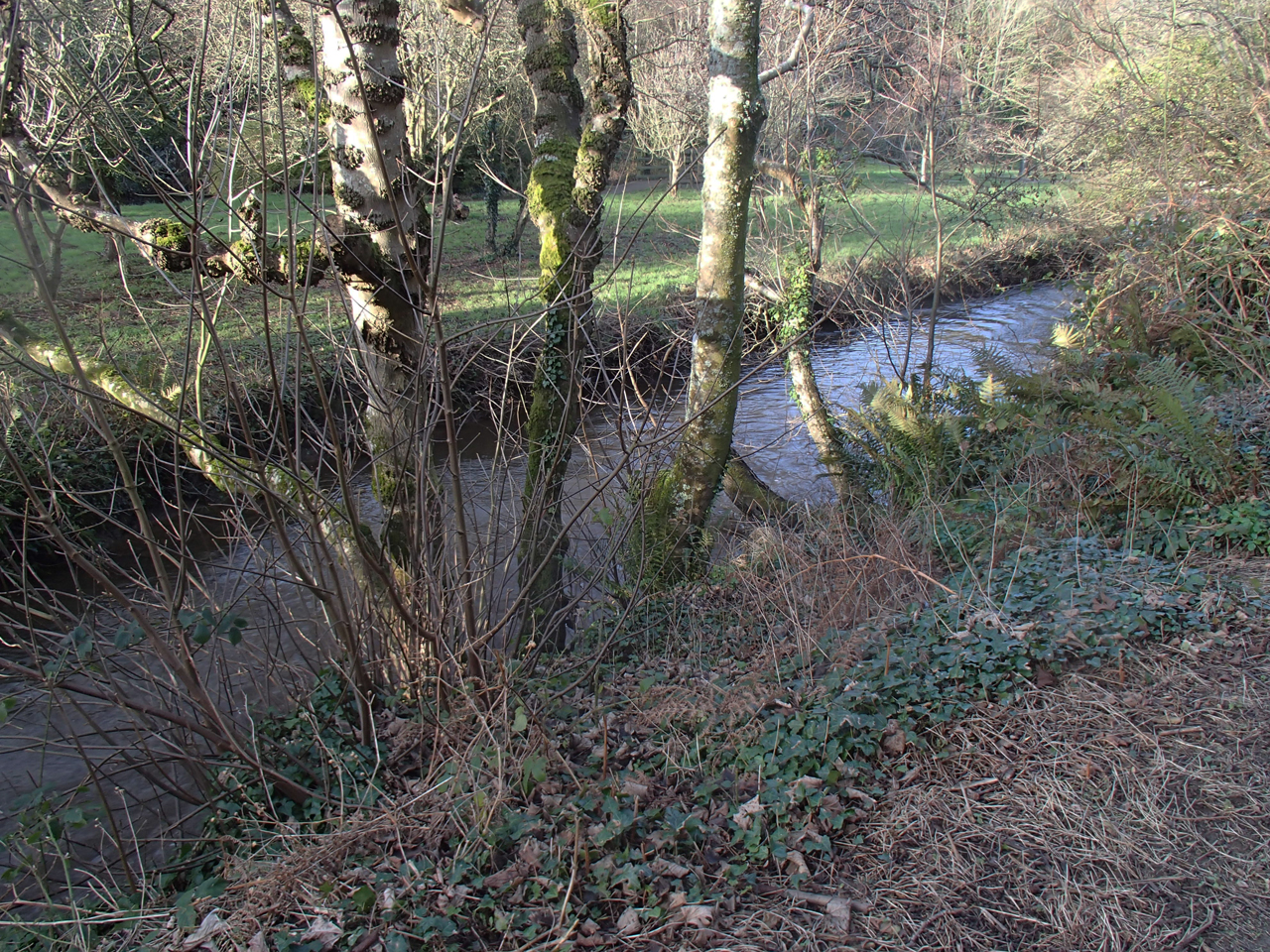 The immediate surroundings are interesting too, though still a tad steep. There is a clear area on the opposite side of the river which might give a good alternative viewing location too. But which one of the three – if it is three – do I pick? The leaning-out-over-the-river one? The one with the bird box? 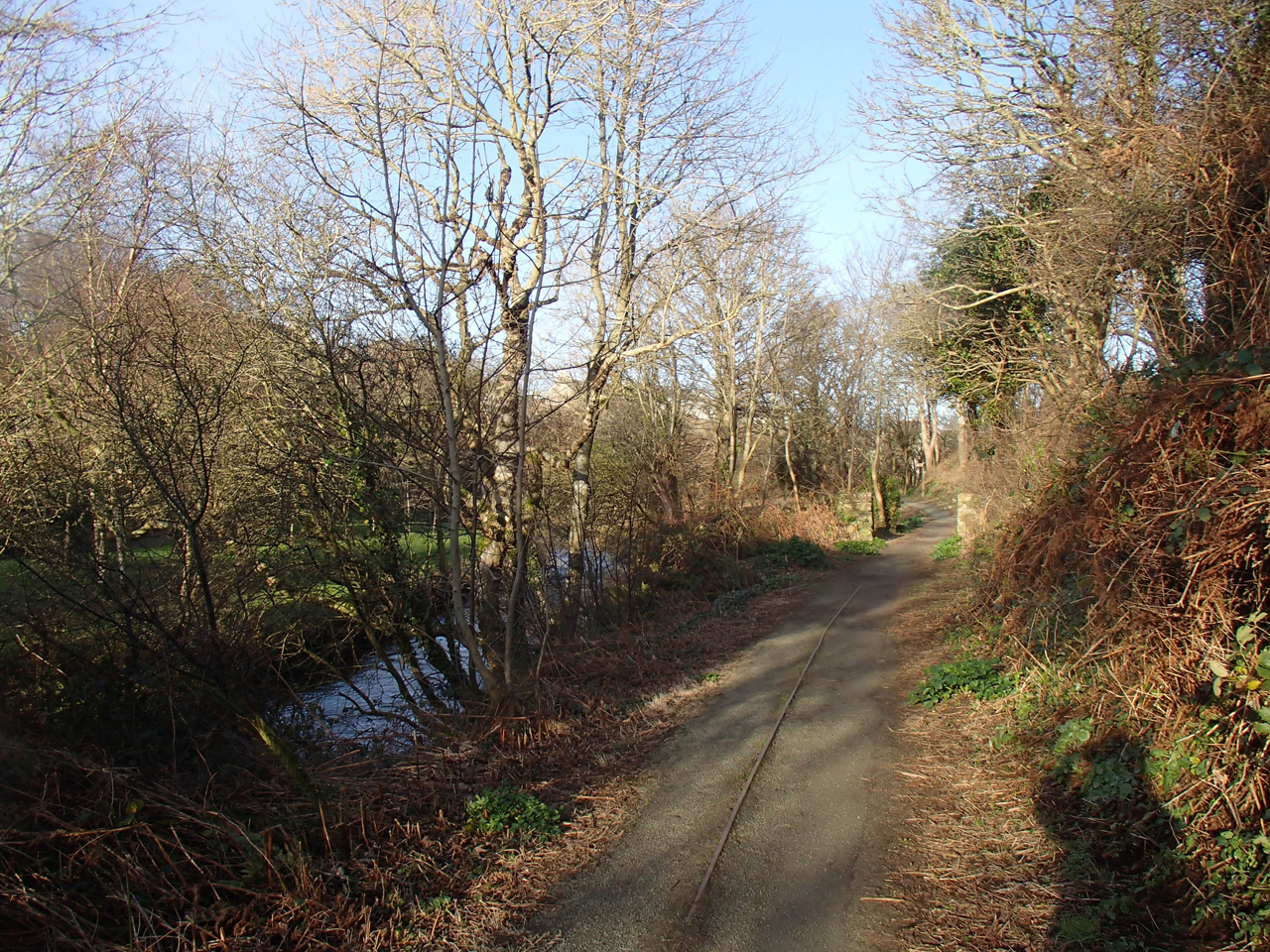 I do like the fact that it is on a section of the path that reveals the old railway tracks from when the brickworks used to send bricks down to the harbour.

On up to the next bridge, and across to get another perspective. 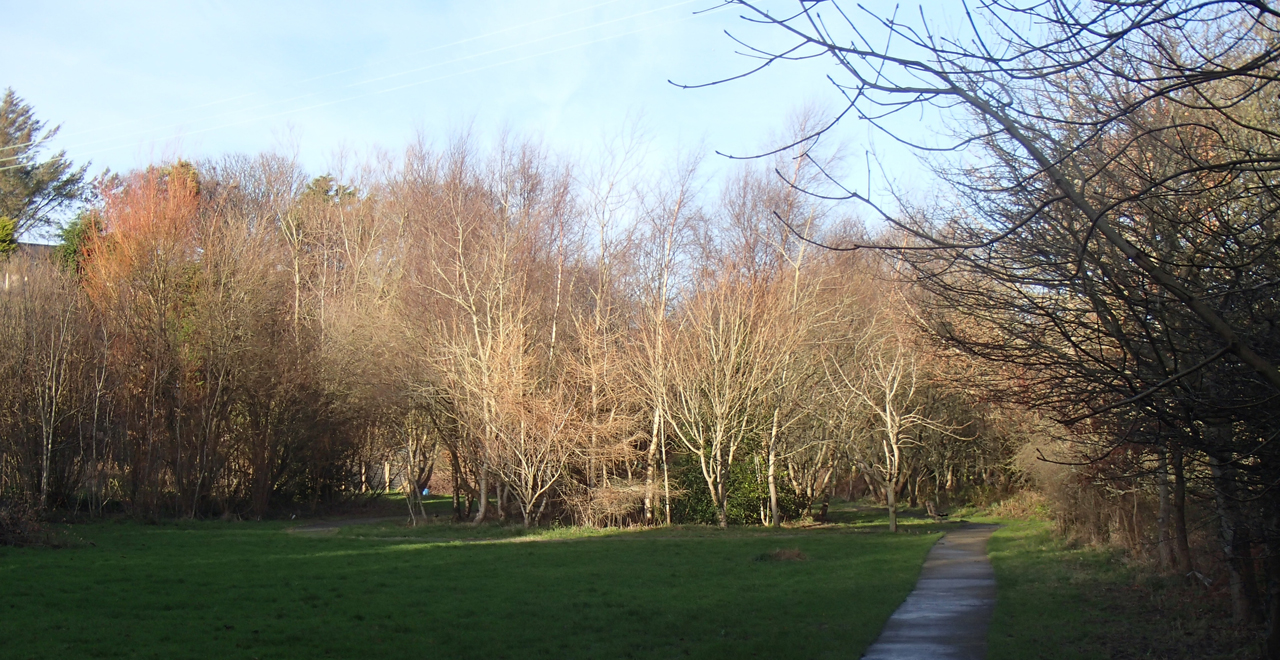 This side is more open, with large areas of grass and stands of trees. 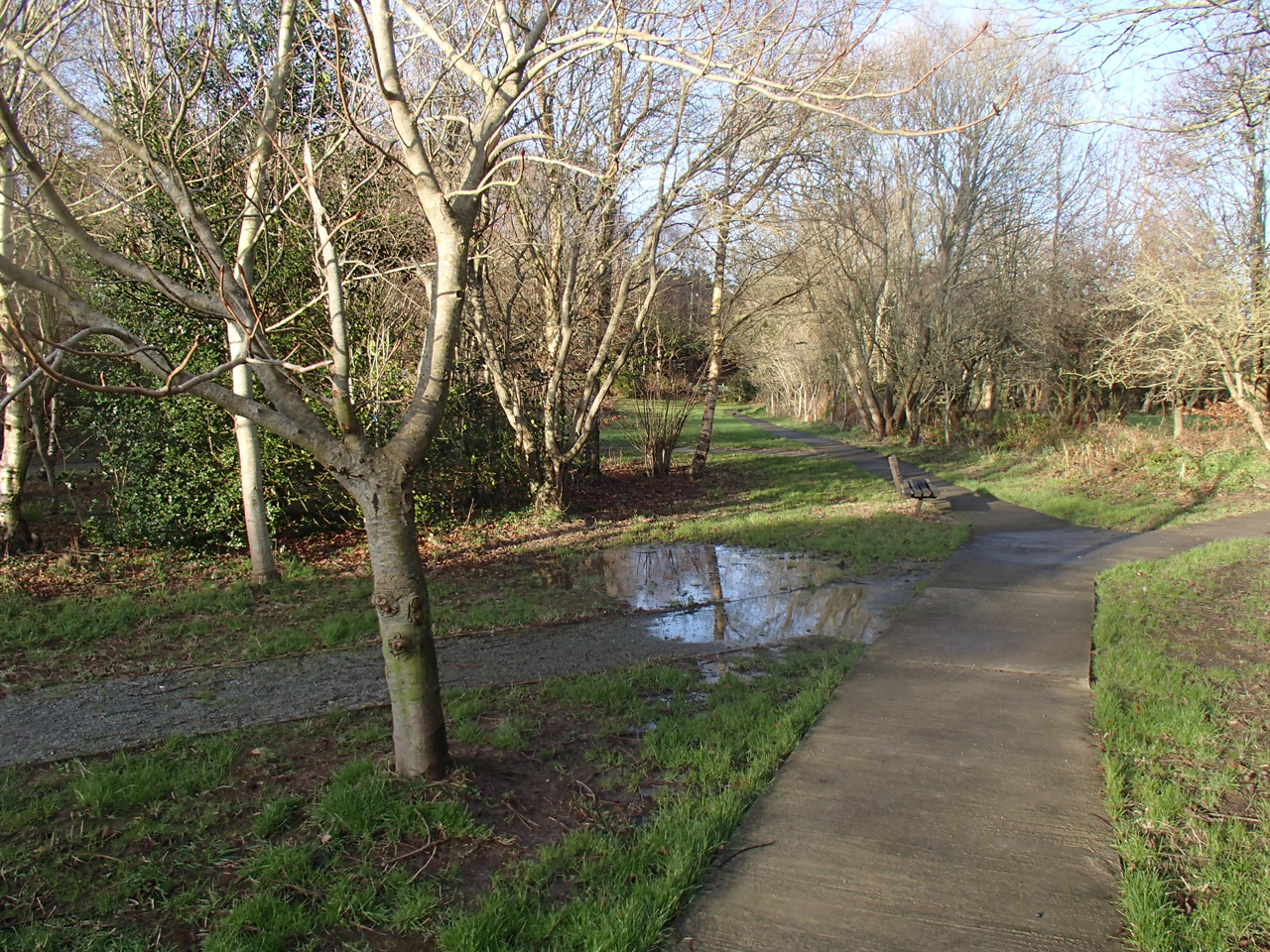 The whole area gets very wet, the concrete paths are ugly but very practical. As I wandered on back down the river I spotted several other potential candidates. I rather liked the shape of this one: 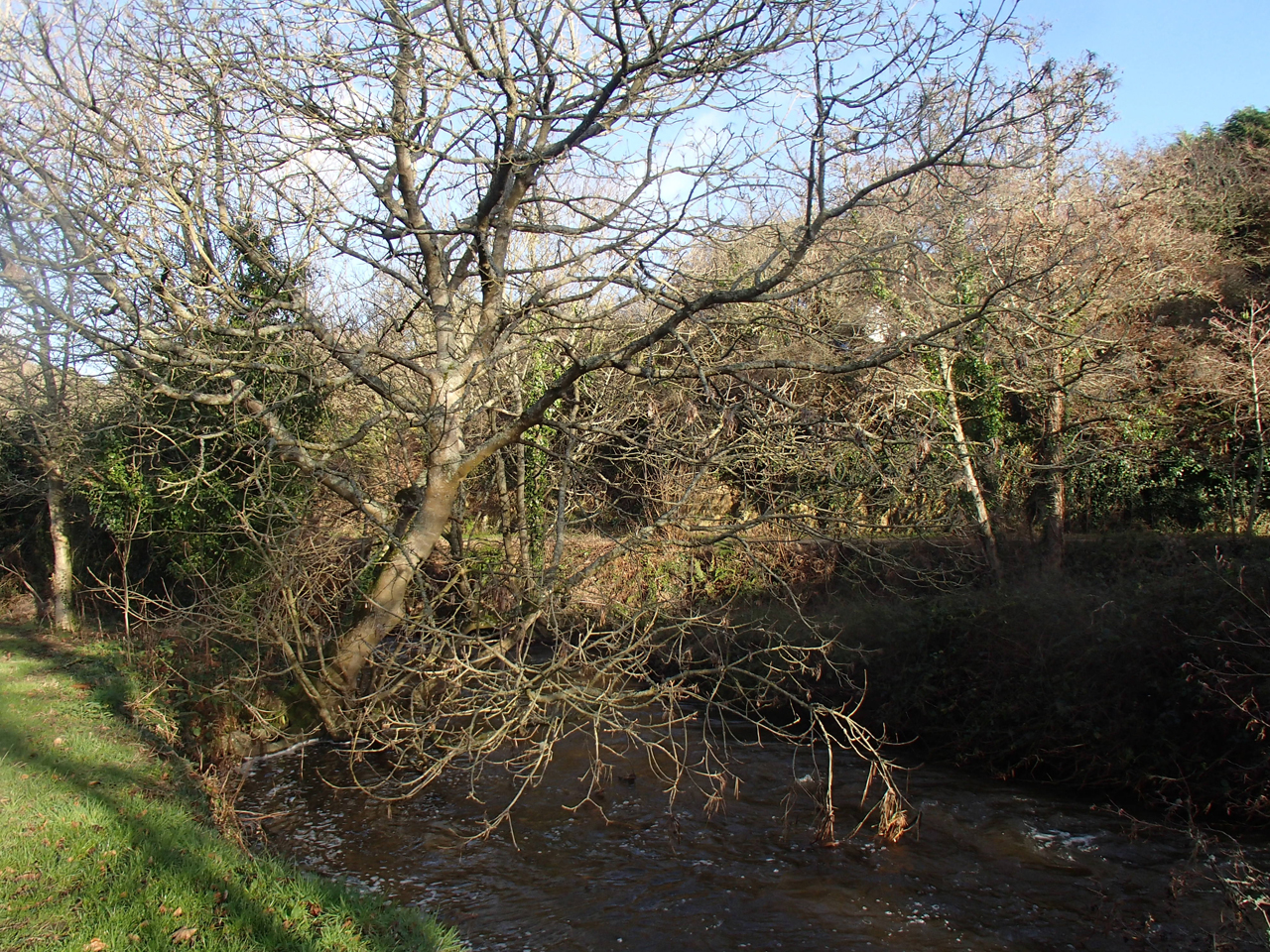 A little further down, I was tempted by a tree that sits by a wilder section of the river, where rocks and eddies make the water dance. 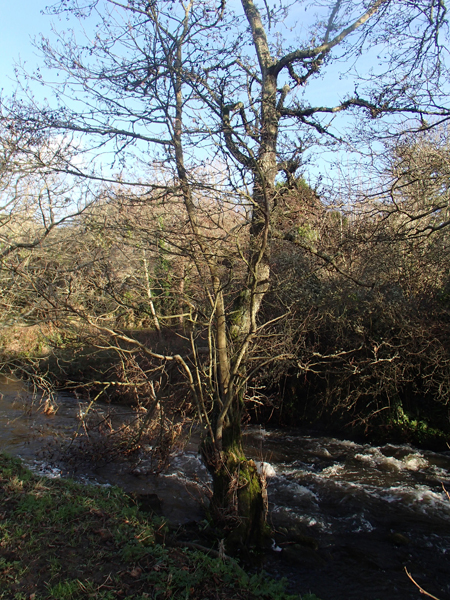 The whole area is bewitching, particularly when bare branches are set against perfect blue skies. And everywhere there is the sound of birdsong. 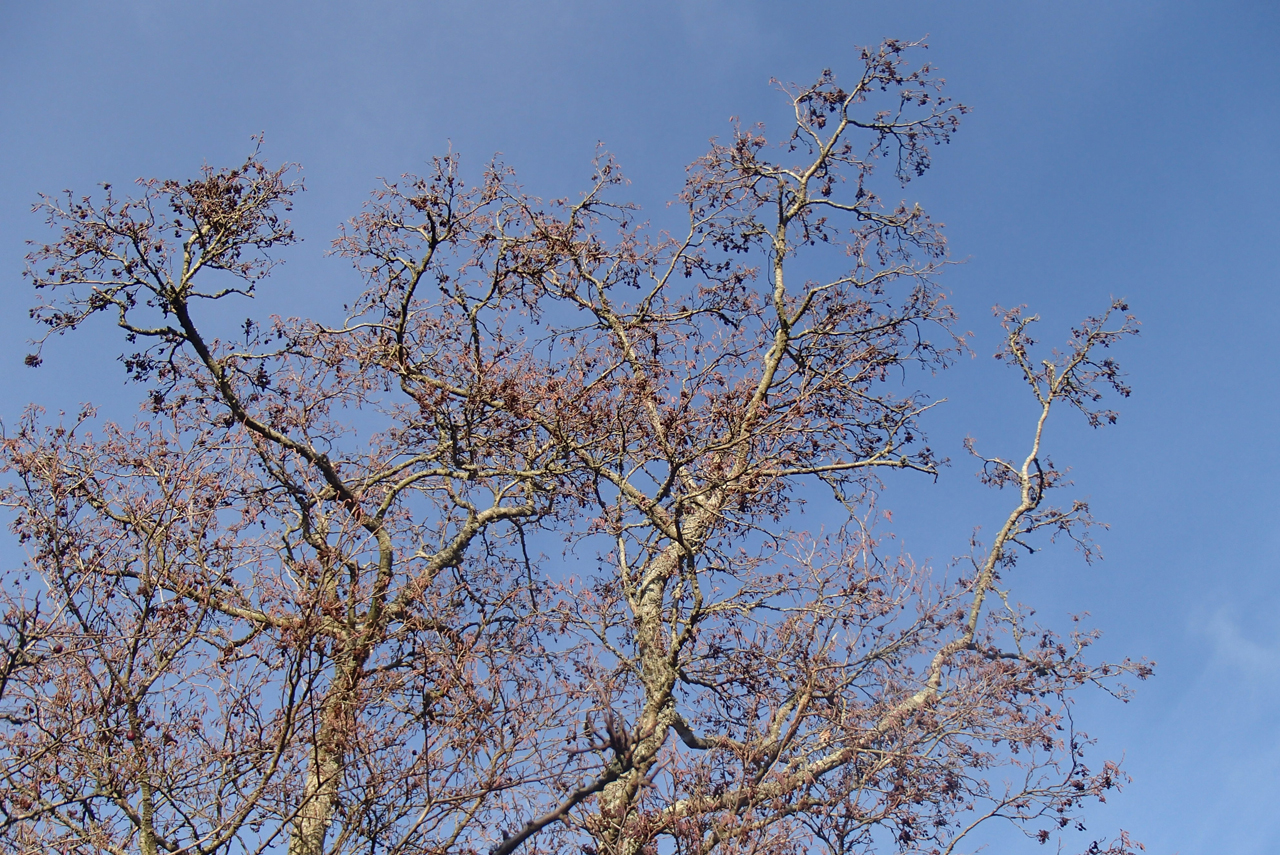 A little further on and I spotted my number one candidate. There is handy little copse just to the left of it coming from this direction, which will hopefully help me find it when everything is in leaf later in the year. 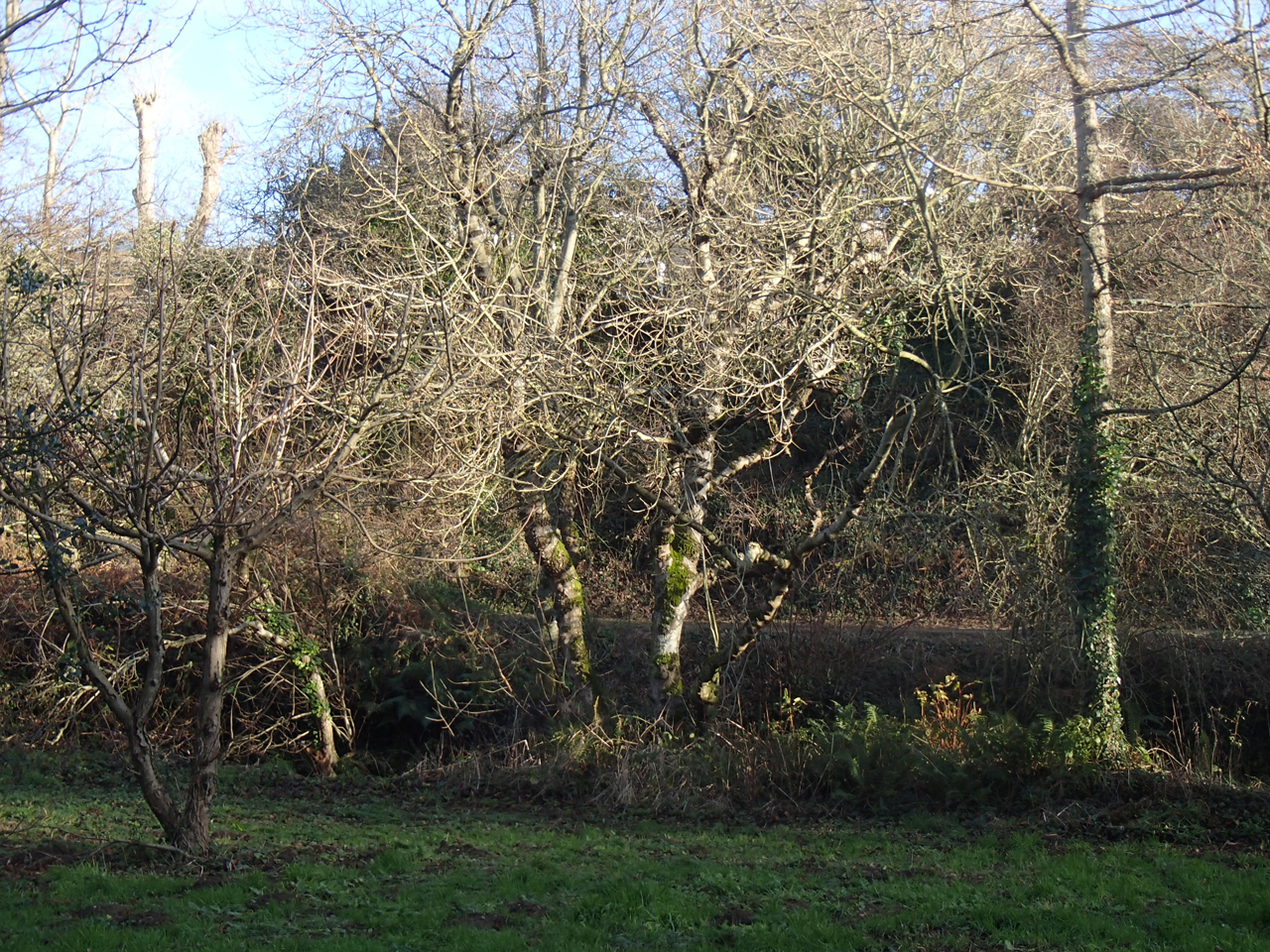 And as I had hoped, this side affords me a good view of the tree cluster. 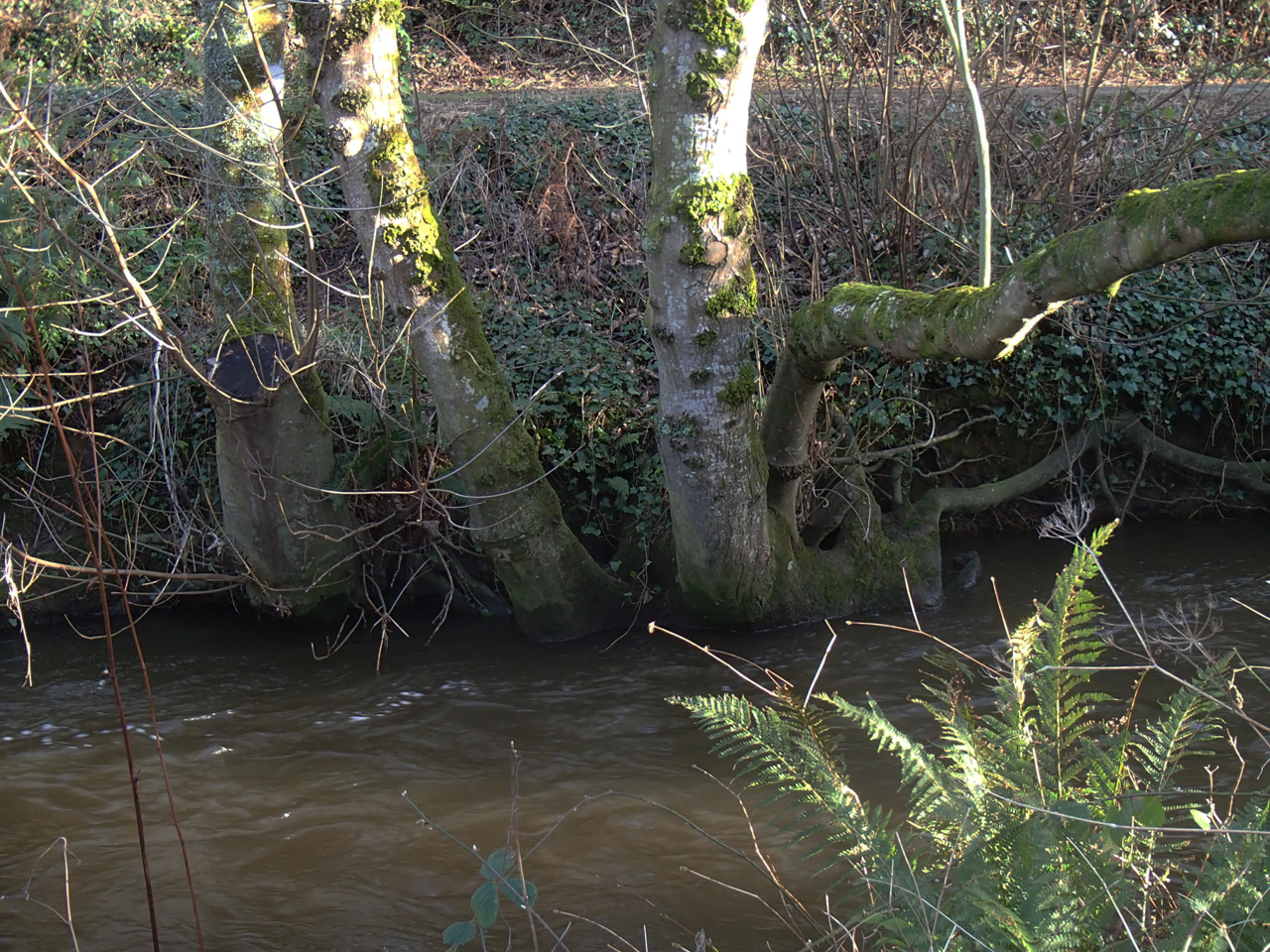 Certainly two rather than three, and possibly just one? I love the idea of being able to chart the differences at different levels of water – there is quite a dramatic rise and fall, depending on rain and what the tide state is. 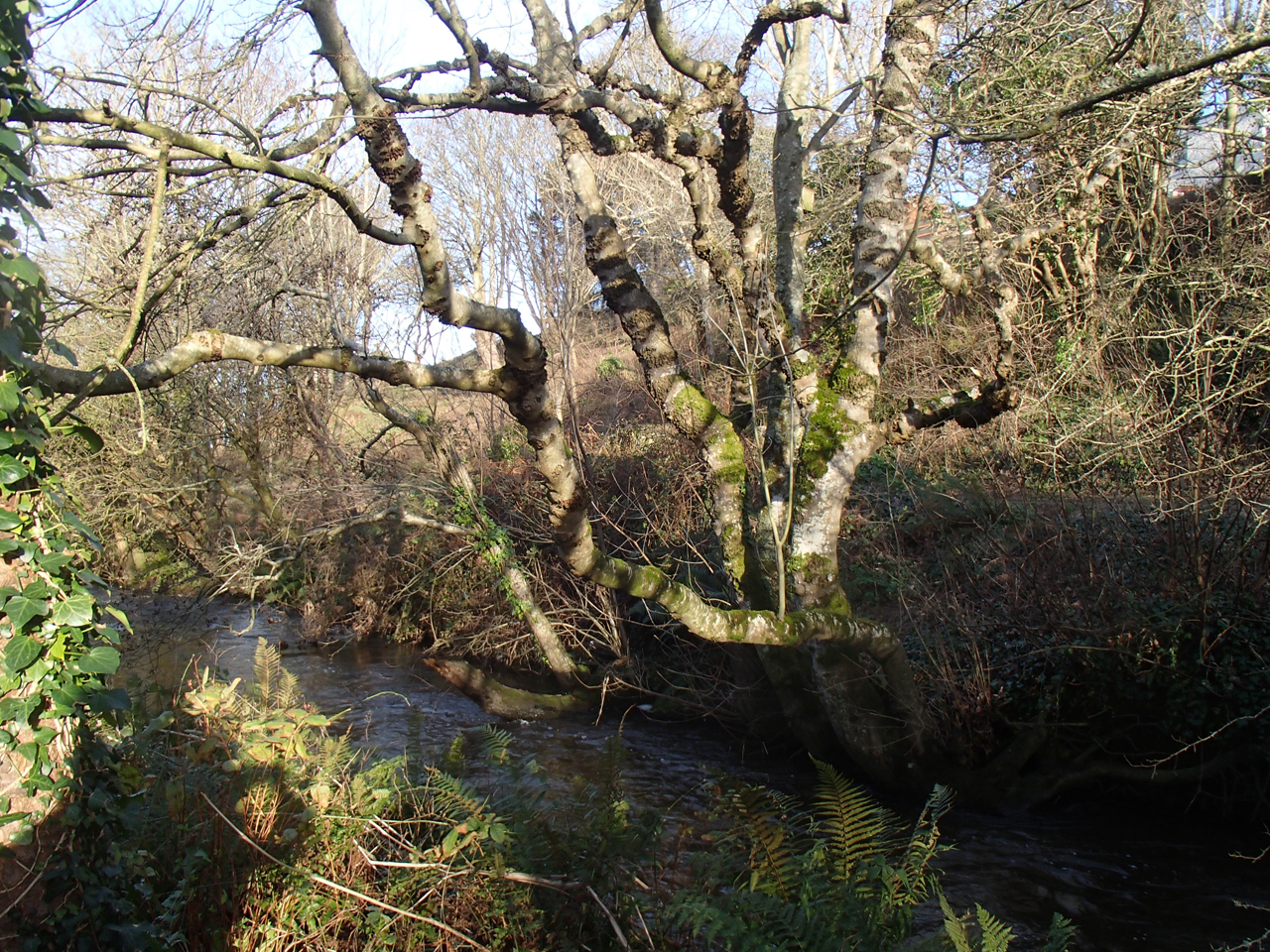 So I think I have my candidate. No idea what kind of tree it is, but I am looking forward to making its acquaintance over the course of 2015. 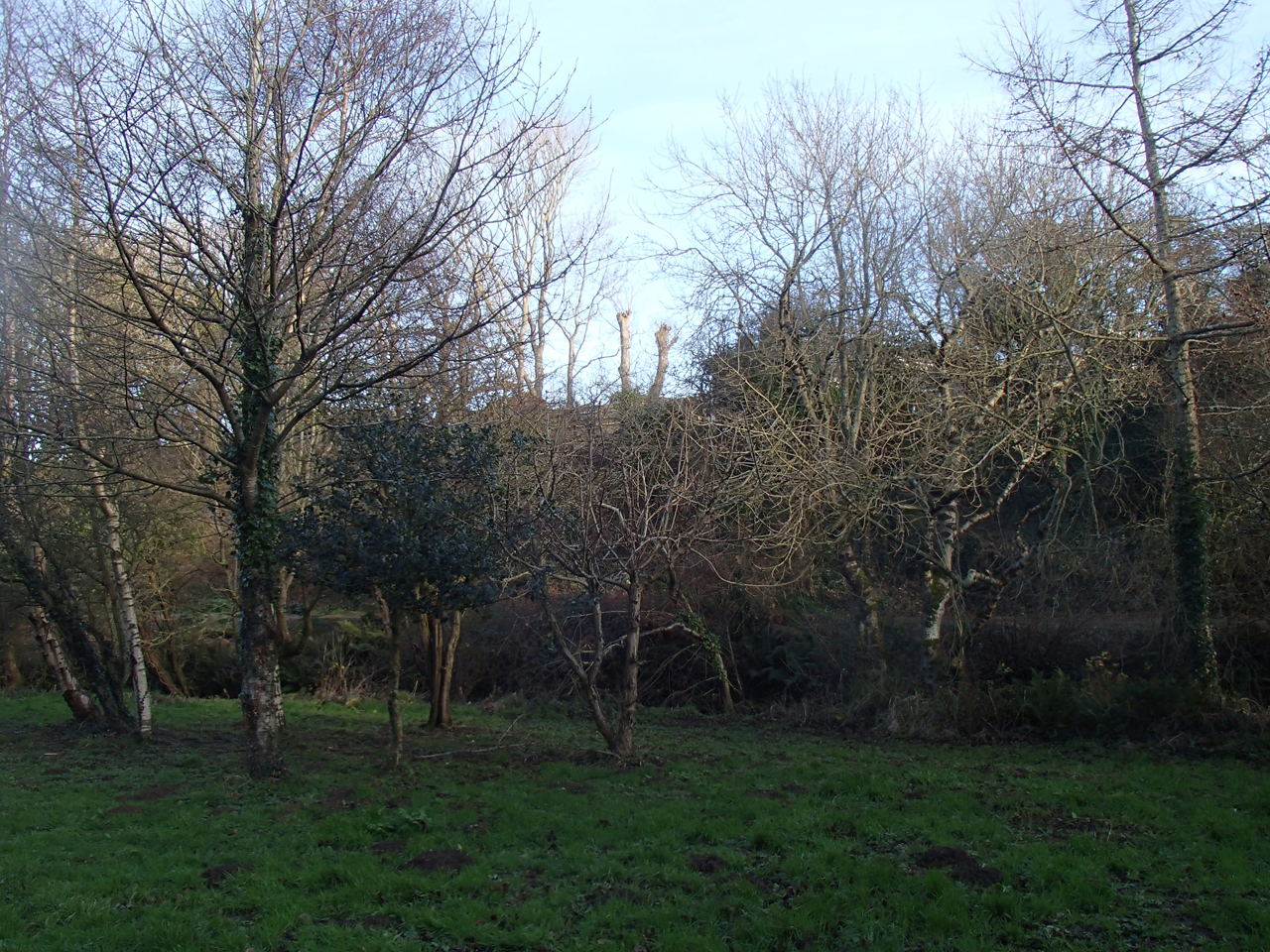 Though I must remember to wear wellies when it has been raining, the little marker-copse sits in the middle of an area of grass that gets more than a little muddy in wet weather. It is also covered in molehills, which makes me wonder, do moles swim through the tunnels when it gets really wet?! 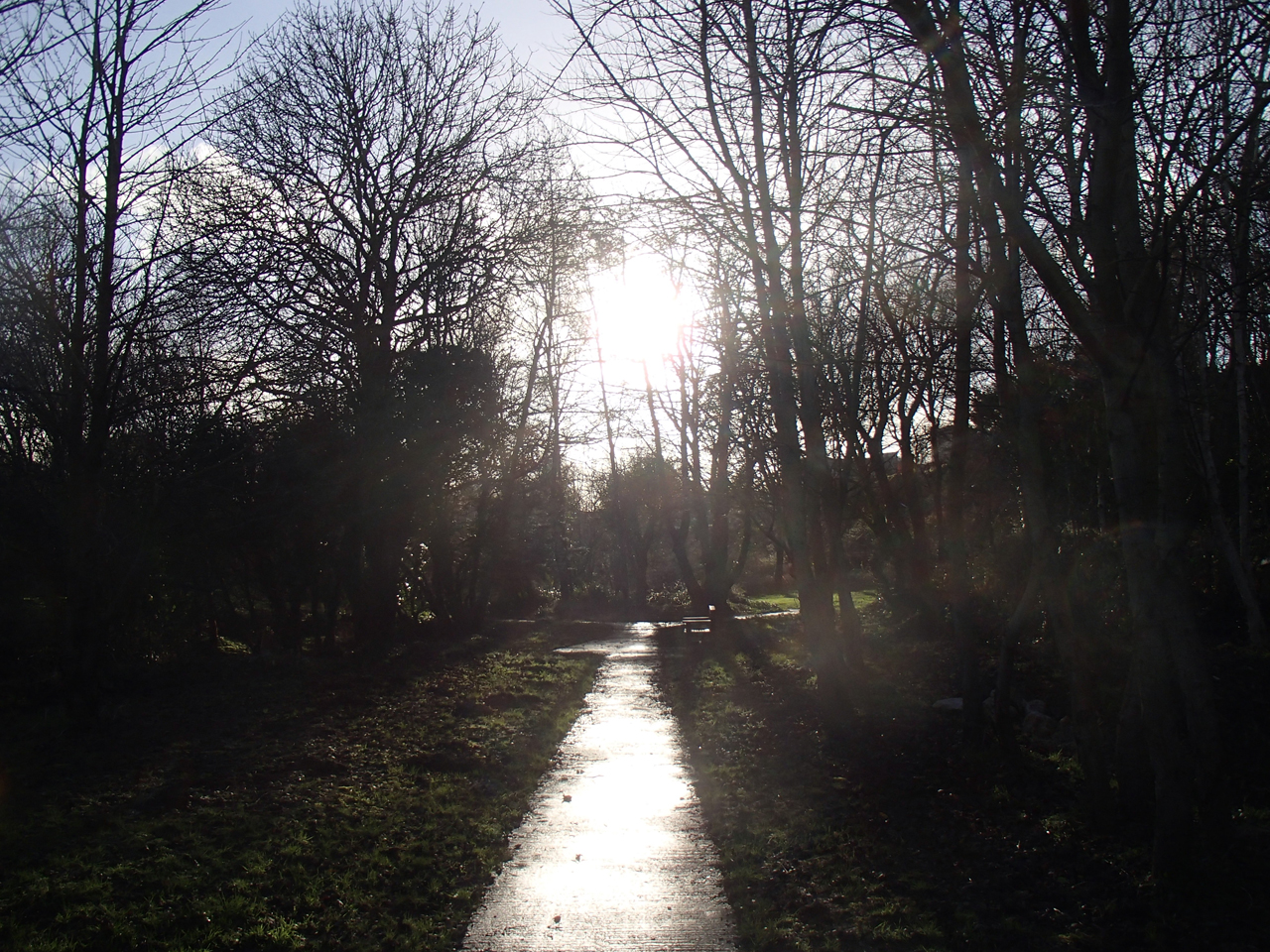 Altogether a lovely place to have to visit once a month. And at this point I get the option of crossing the bridge to retrace my steps or turning left and heading up to the High Street. 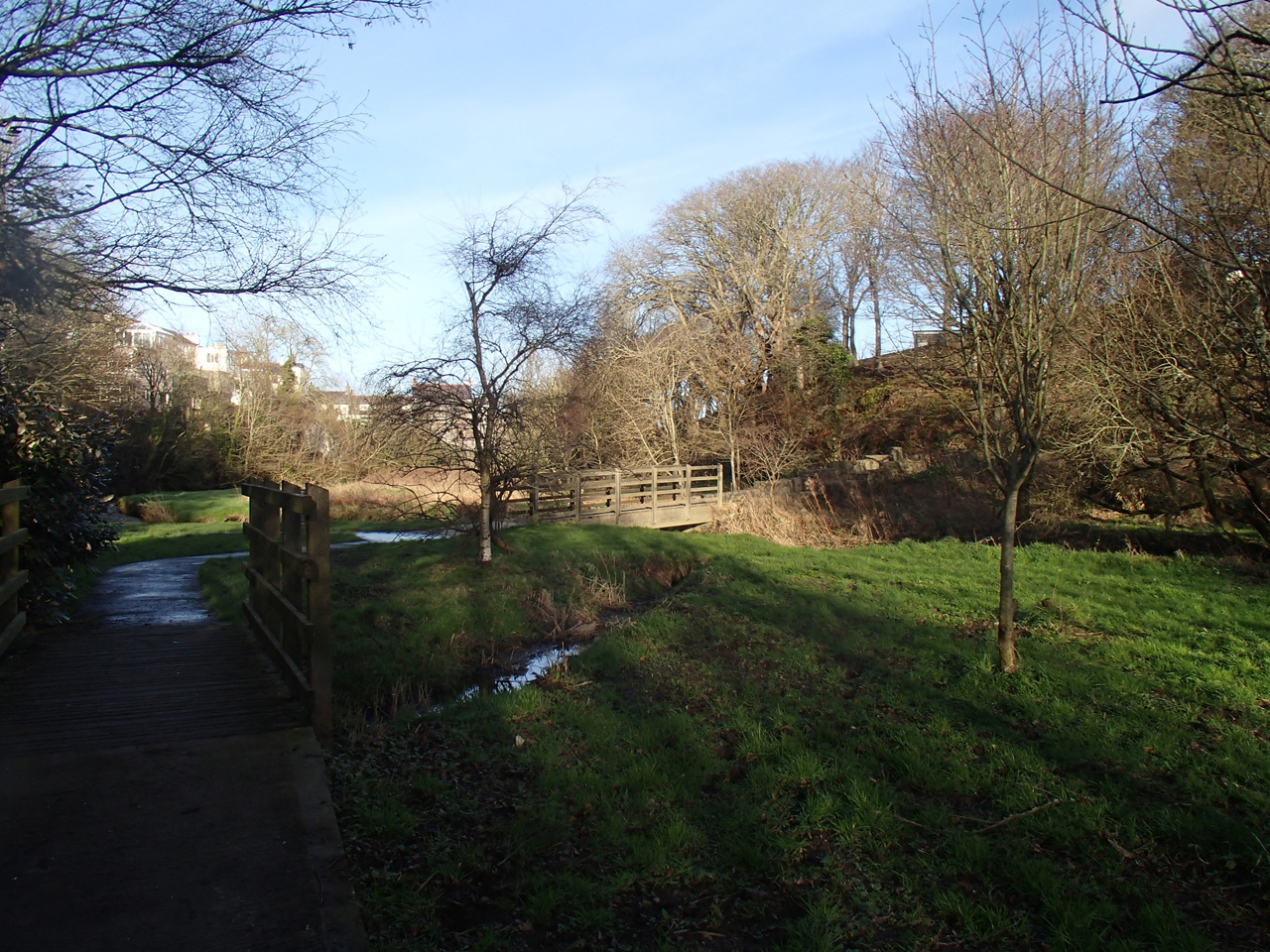 The path comes out next to a coffee shop. It is currently undergoing extensive refurbishment, but once it opens again, I could find myself sitting outside looking down at the river drinking coffee, or even, dare I say it, eating ice cream…

Thank you again to Lucy for hosting the Tree Following meme. I am off to catch up with some other trees. And because I feel faintly guilty for not choosing my sentinel, I will leave you with another shot of it. Just because. 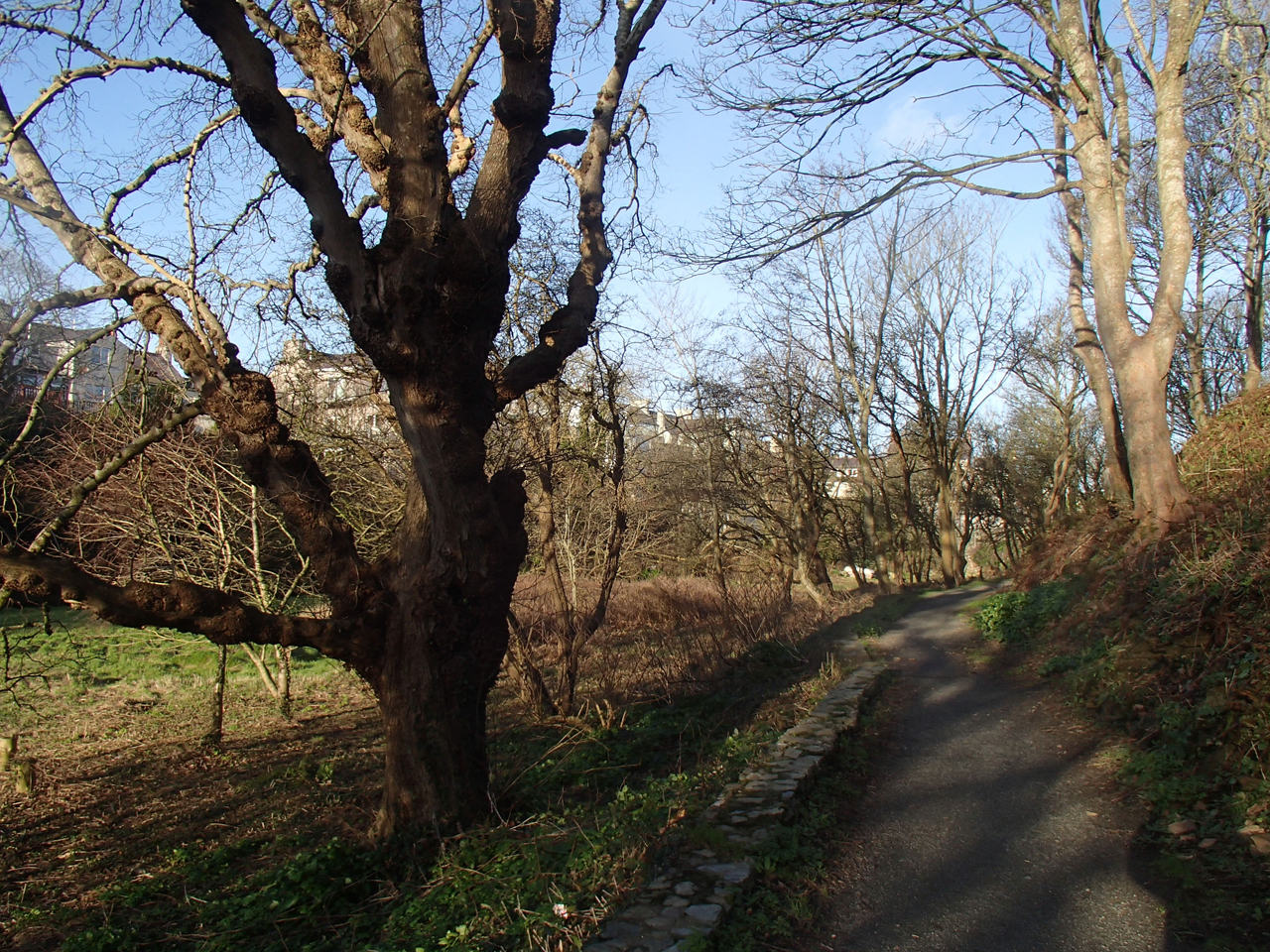