I’m in denial. It can’t possibly be the end of September already, not least because it is still so warm and dry here. Only the soft quality of the light and the fact that it gets dark so much earlier really point to it being autumn now. Though a few of the shrubs and trees are beginning to take on autumnal hues.

The End of Month View is a wonderful meme hosted by Helen (Patient Gardener), and this month I thought I would concentrate on just two areas in my back garden, the Park Border and the Herb Bed. The Park Border has been through a number of iterations since I moved in just over two years ago. I always wanted to have good spring and winter interest, so planted hellebores, bulbs, dogwoods. But after that I got a little confused about what I wanted from it. I started out intending it to be a mix of edibles and ornamentals, but gradually over the past 18 months I have realised that I grudge the space for currants, and although I am happy to have rhubarb growing there, what I really want is patches of summer colour. Rich, vibrant colour. So I have been removing the currants, and adding perennial wallflowers, geraniums, geums, and latterly heleniums and that lovely thug, helianthus ‘Lemon Queen’. And I am really happy with how it is starting to come together. This is the view as you walk into the garden from the path that runs alongside my hawthorn 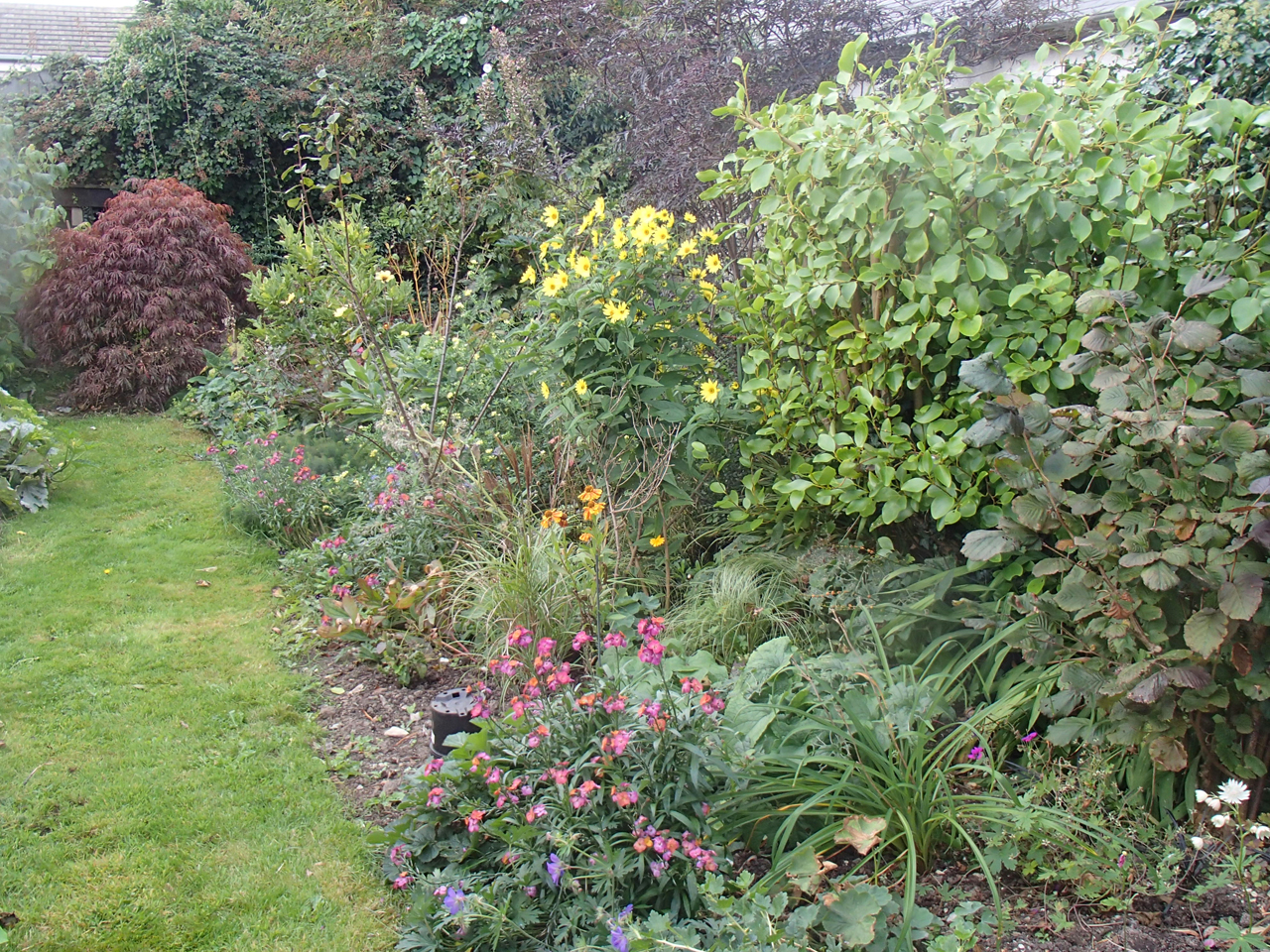 The perennial wallflower, Erysium ‘Winter Orchid’, as been a delight, flowering non-stop from when I planted them out in early summer. I will be taking cuttings… 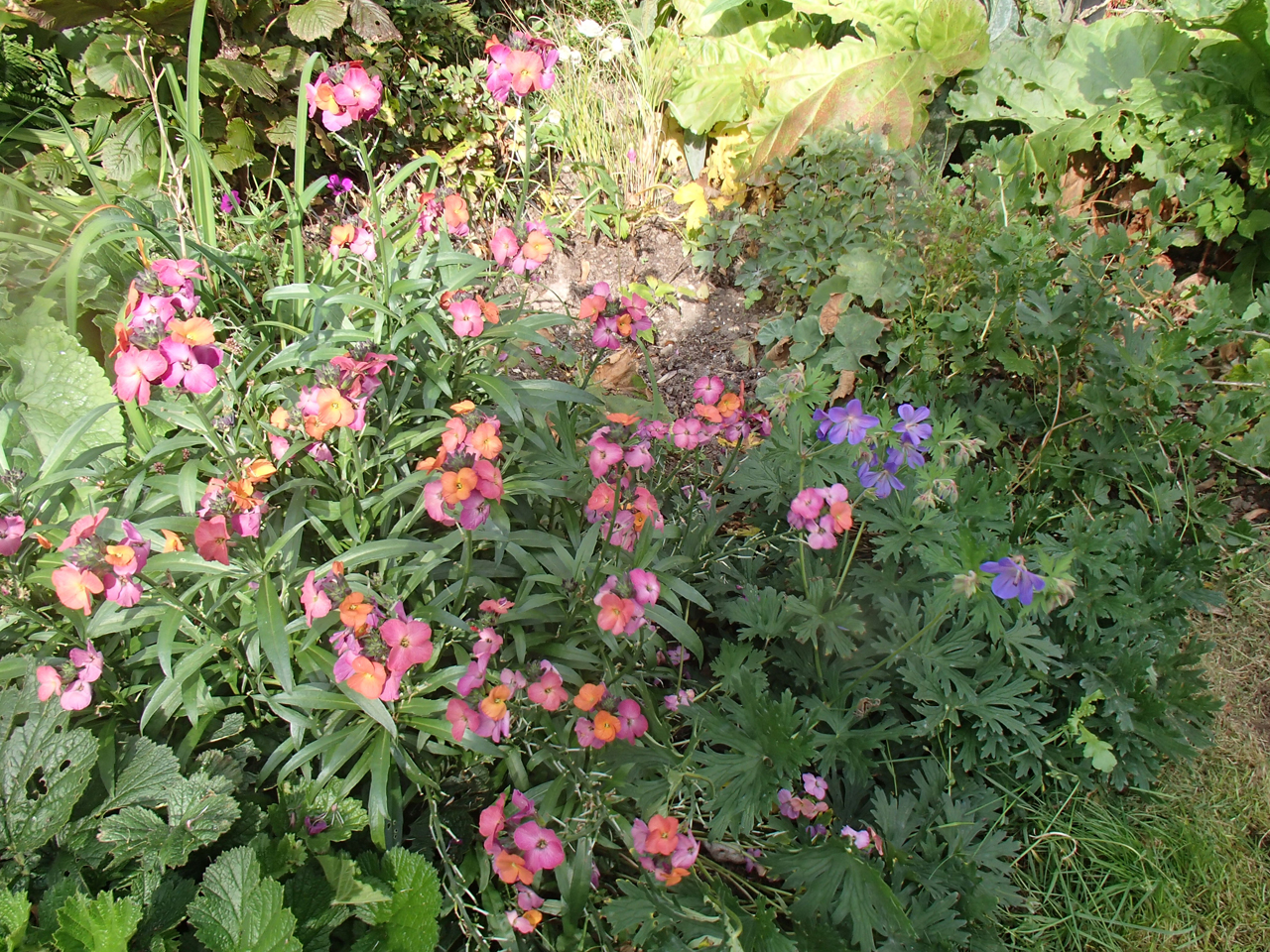 It seems to blend beautifully with the other flowering plants, Geum ‘Totally Tangerine’ went well with it earlier on in the summer, and now it is looking good with that border stalwart, Geranium ‘Johnson’s BLue’.

I was really pleased with the Helenium ‘Moorheim Beauty’ that I planted further down, but loads of people mentioned that Helenium ‘Sahin’s Early Flowerer’ was even better, so I succumbed. I bought three, though two were mailorder so arrived without flowers, and I love it. 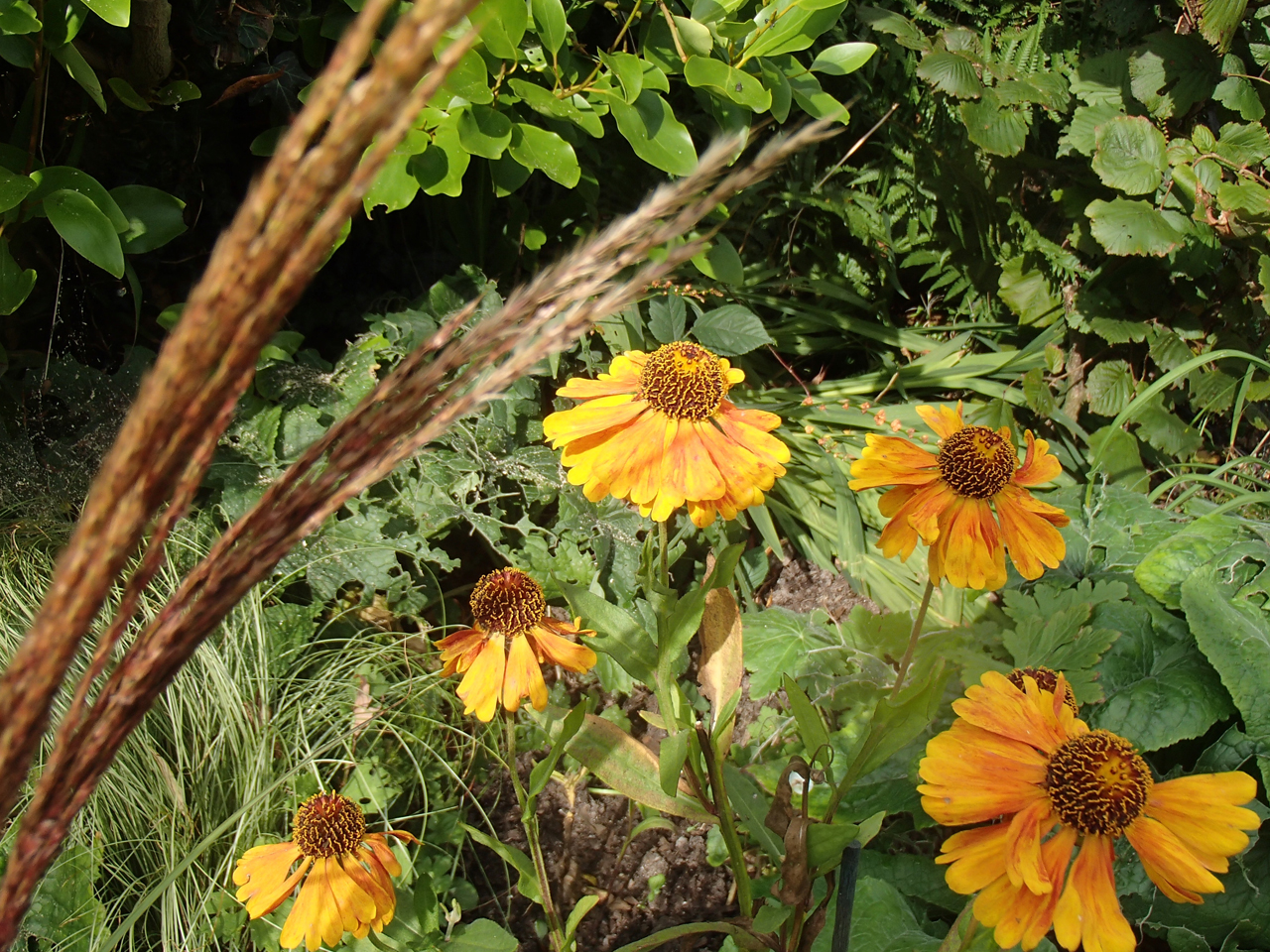 I was lucky enough to see it “in the flesh”, so to speak, at both RHS Harlow Carr (you can see my photos on Flickr) and later at Sue Beeseley’s Bluebell Cottage Gardens (see flickr photos). Both places were inspirational, and I can thoroughly recommend the nursery attached to Sue’s gardens too, really knowledgeable and helpful staff. And it happens to be half way between my fil and sil in Leeds and home. Ooops…

Anyway, I also added the Miscanthus sinensis ‘Undine’, which only grows to a modest 1.8m (6′) and has gorgeous autumn colour – and very pretty flowers as you can see. I fell for Miscanthus sinensis ‘Gracillimus’ in Sue’s gardens, it has wonderfully elegant arching slender leaves with a fine white stripe, but rarely flowers. I didn’t care, and popped it in alongside the purple hazel as a foil for the Eupatorium I planted at the back. Again, having seen it flowering again in all its glory at both Harlow Carr and Bluebell Cottage I just couldn’t resist.

The helenium and miscanthus are complemented by the monster Helianthus ‘Lemon Queen’, which has only been in the ground a couple of months but is flowering its socks of, I love it almost as much as the bees do. 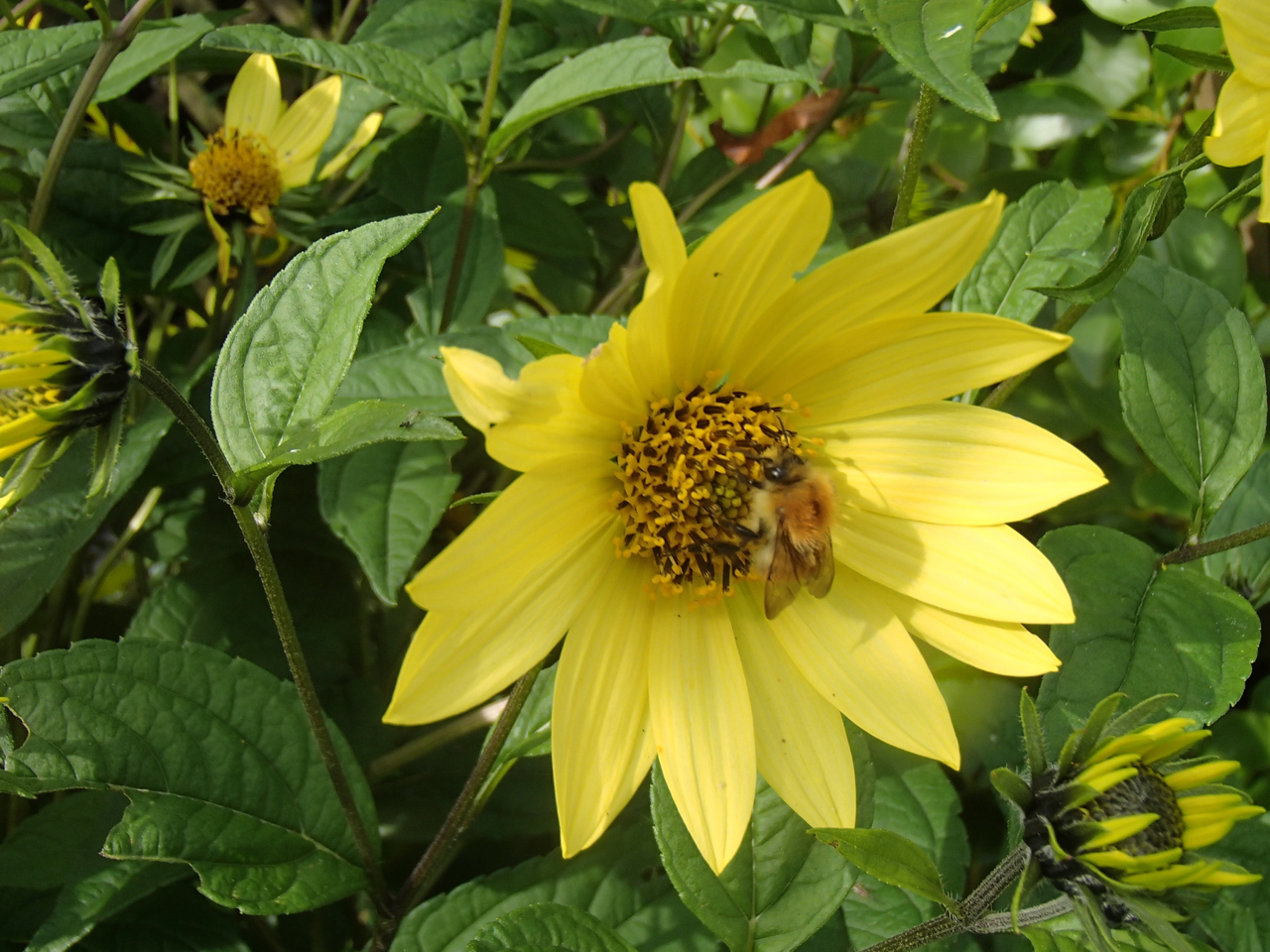 You might remember that I hard-pruned the Griselinia a few months ago, and was undecided about how much more to take out. I decided – much neater, and it now allows more light into the very end of the border at this time of year. 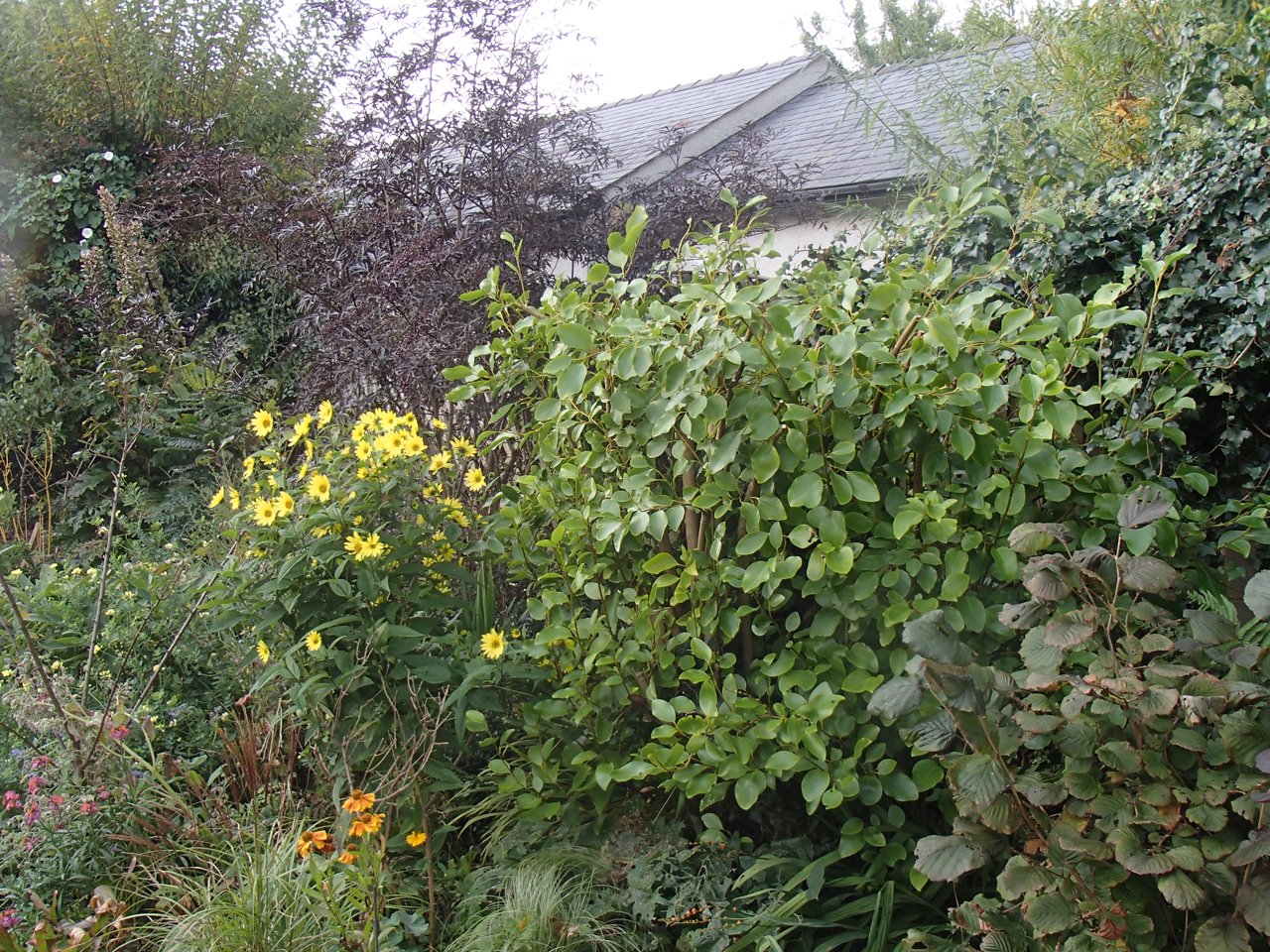 Further down the border it becomes more dominated by shrubs, including the Edgeworthia that has been taking its time to settle in. This area is beginning to fill out nicely, and will have bulbs, primroses and hellebores to give interest in the spring, but there isn’t much room to add perennials. 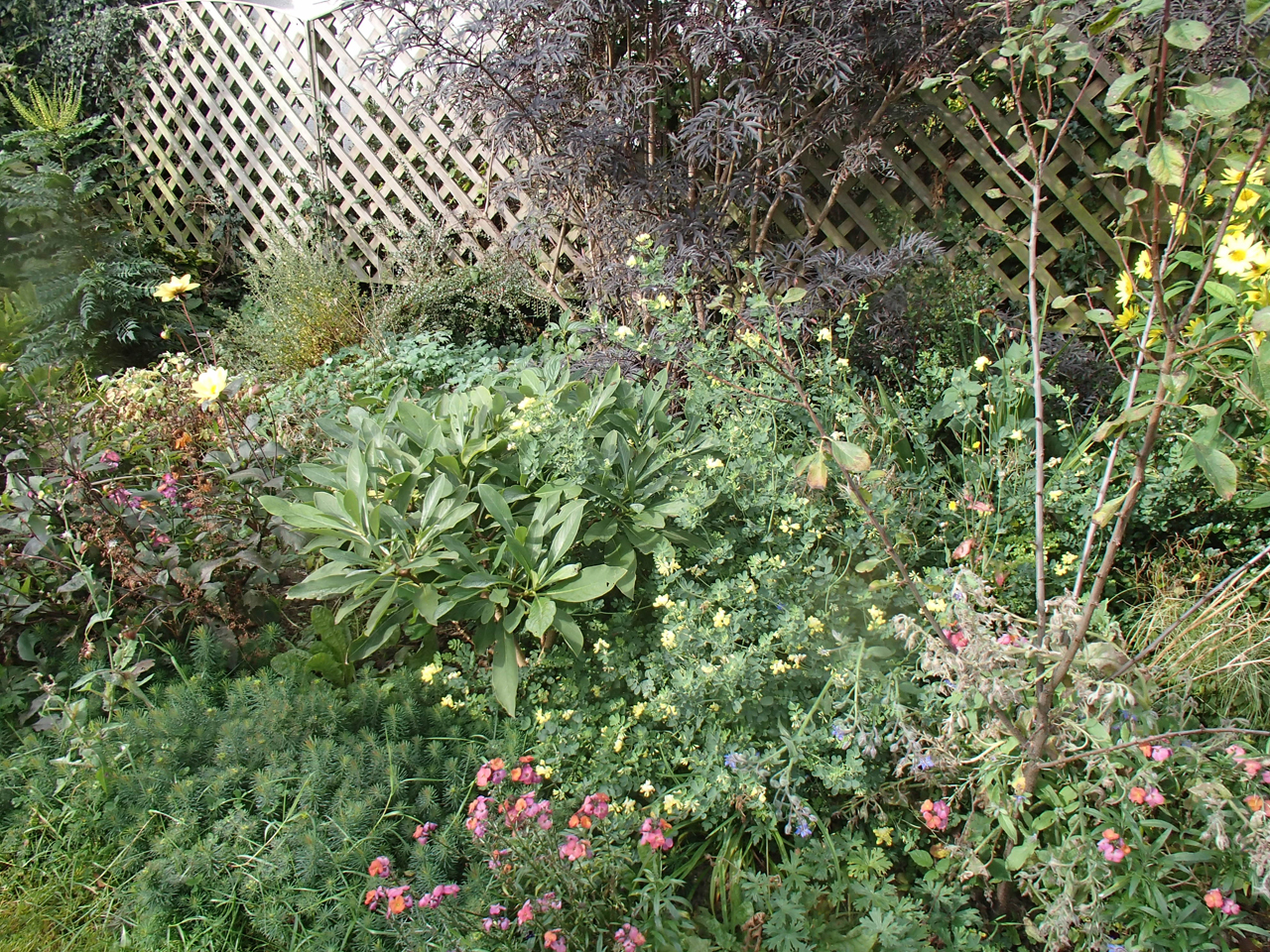 I really like all the different foliage colours and textures, and the wallflowers and geraniums to add some colour here, but I think that’s why I ended up wanting to remove the currants further down towards the house, I wanted the border to work harder all year round in terms of providing me with colour, and getting rid of them has given me just enough room for a group of later summer flowering perennials. And for once a whisper of an idea I had a while ago, to create a lovely framed colourful view through the study door, has worked: 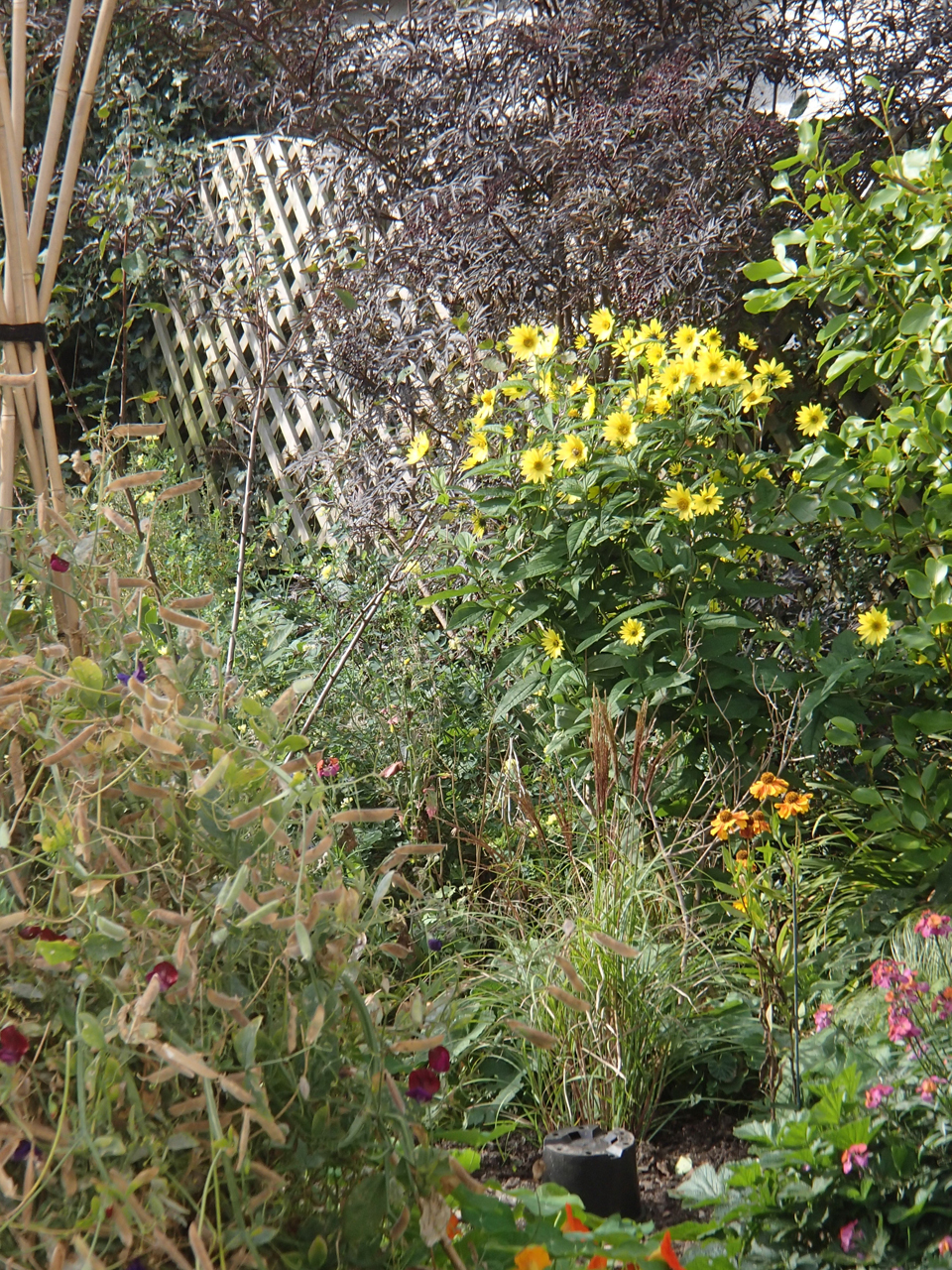 Oh, and the plant pot marks where a lovely persicaria is going to go…

I’ve done a bit of moving around up near the acer, but decided not to try and move the acer itself in the end. Instead I have planted another Griselinia alongside the bamboo to (eventually) provide some evergreen structure (and a strong contrast to the acer itself), and have moved the red dogwood to give it more room, planting it behind the pear tree in front of the stump. 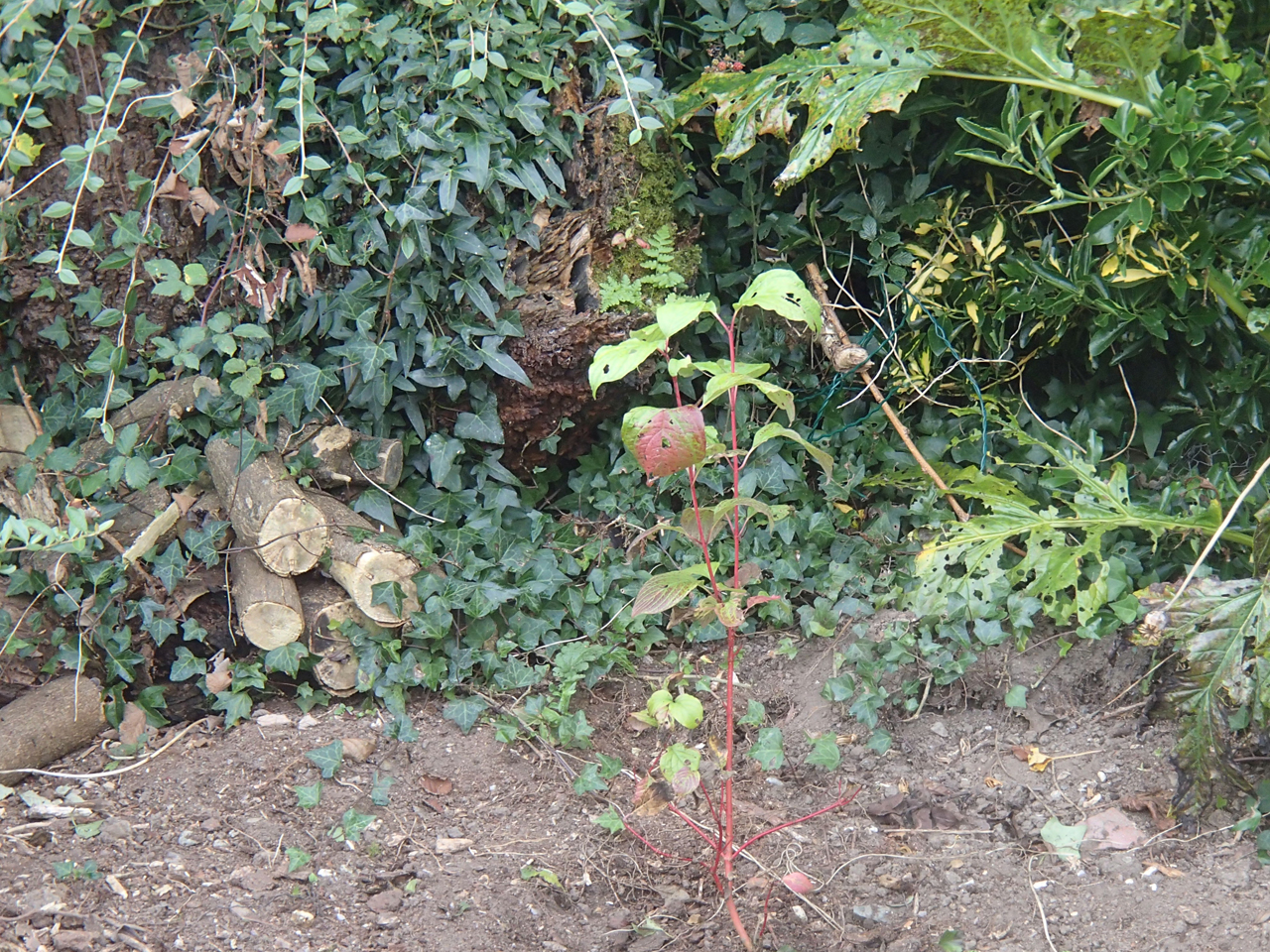 It has plenty of room to grow large, which it should do, and the evening sun should catch it beautifully. It also helped me shuffle some more plants around to make room for a bargain, a Cornus stolonifera ‘Flaviramea’, Golden Dogwood. It was a rescue plant, langushing in a 5l pot all covered in moss and hopelessly potbound, but it was only £4.50 so I figured it deserved a chance. 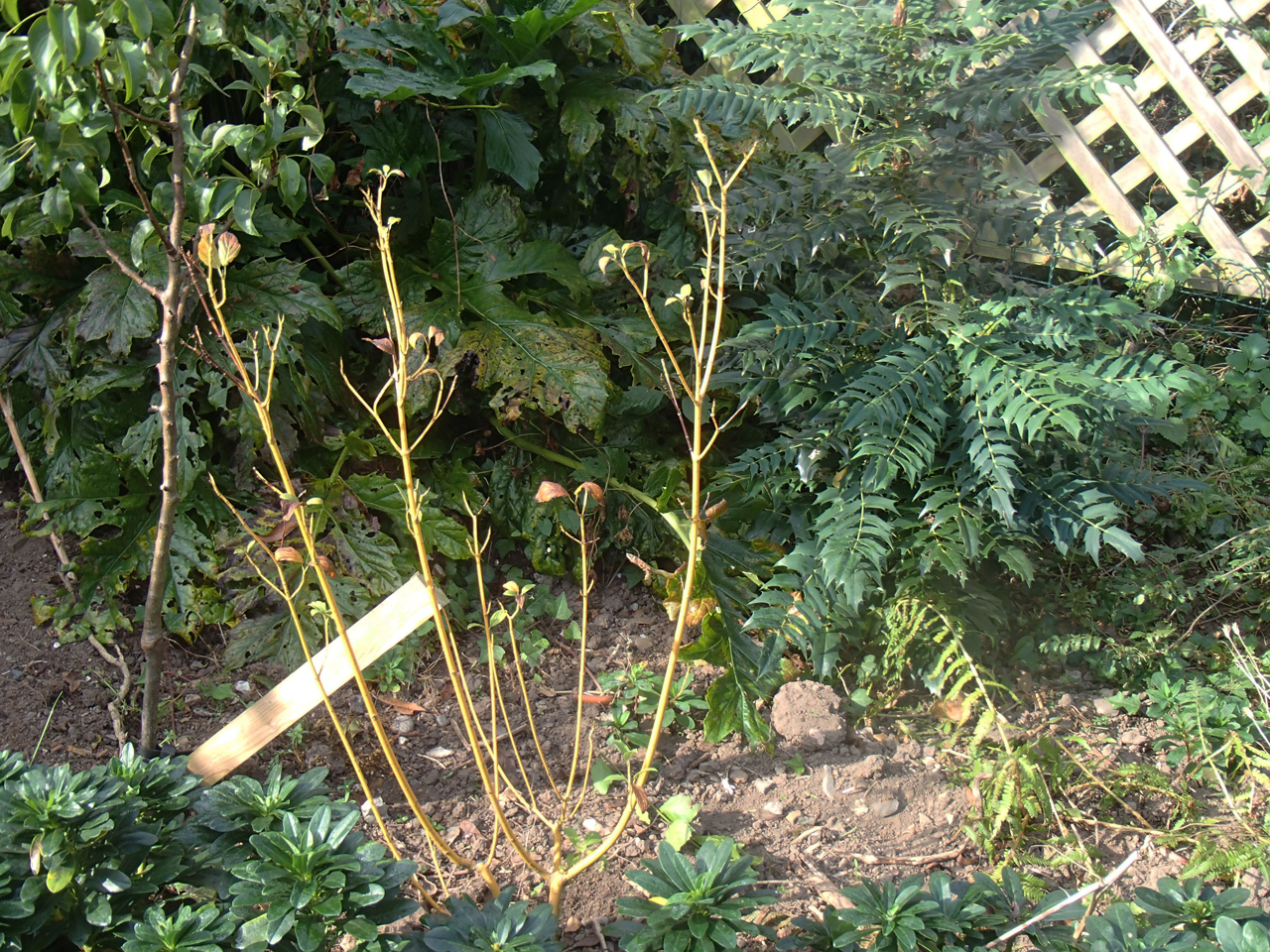 The golden stems should work beautifully with the yellow flowers of the Mahonia and the Coronilla, and the green stemmed dogwood further along.

Here is the view looking back along the Park Border from the acer: 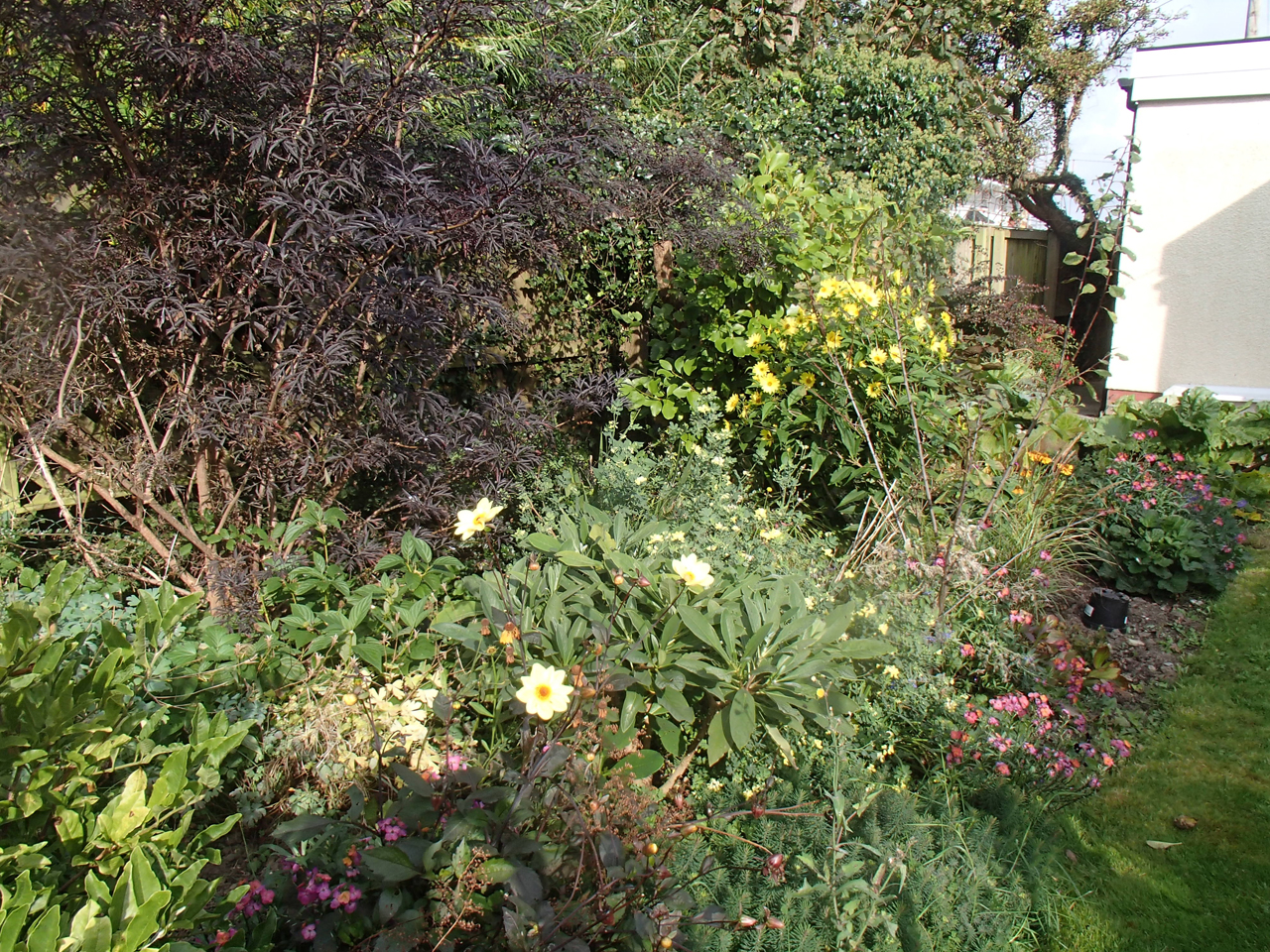 As to the herb bed, I have discovered that TNG and I mean rather different things by “opening up the entrance to the garden”. In my head, tall and wafty Verbena bonariensis is still allowed, as you can see through it. 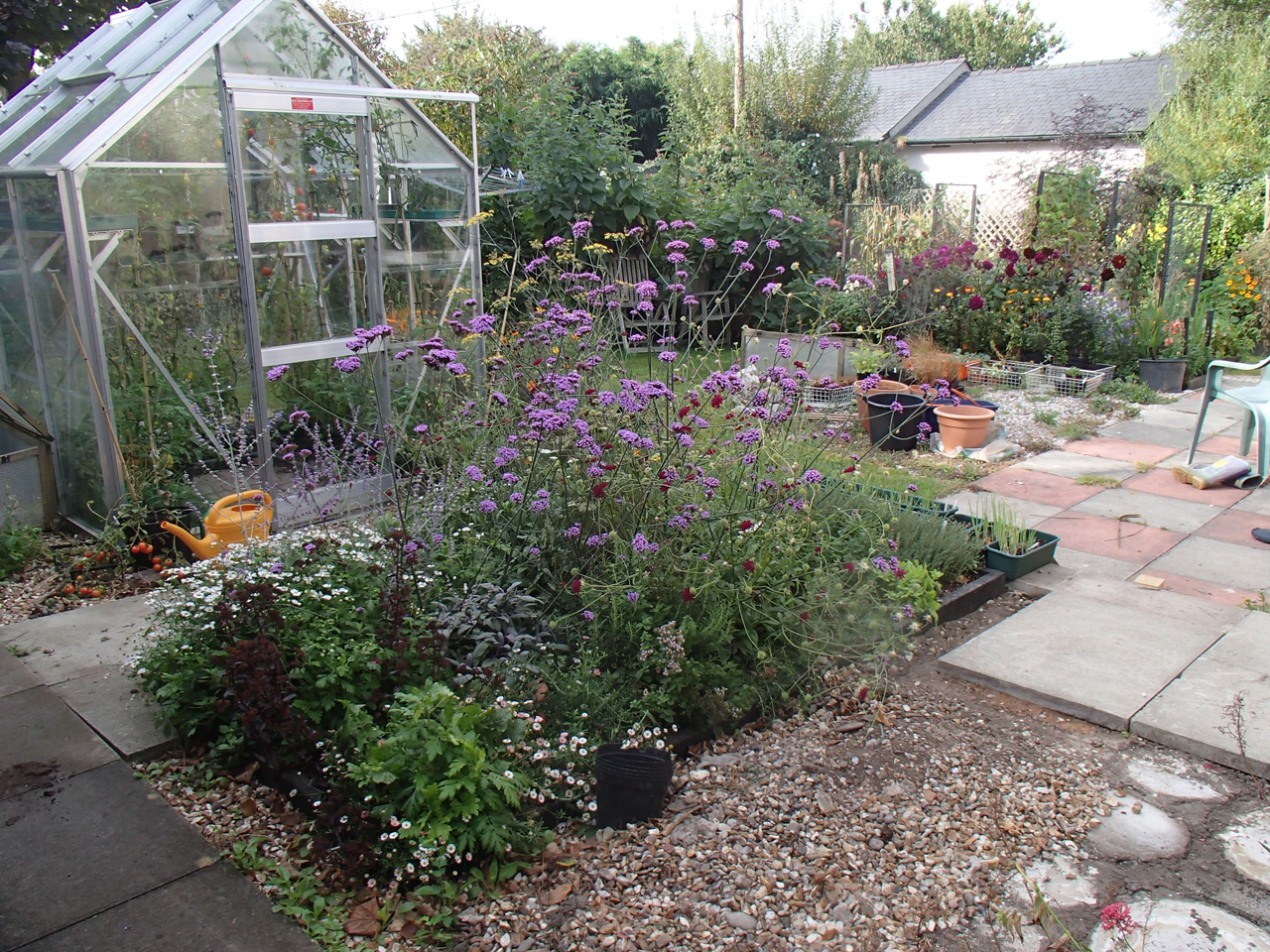 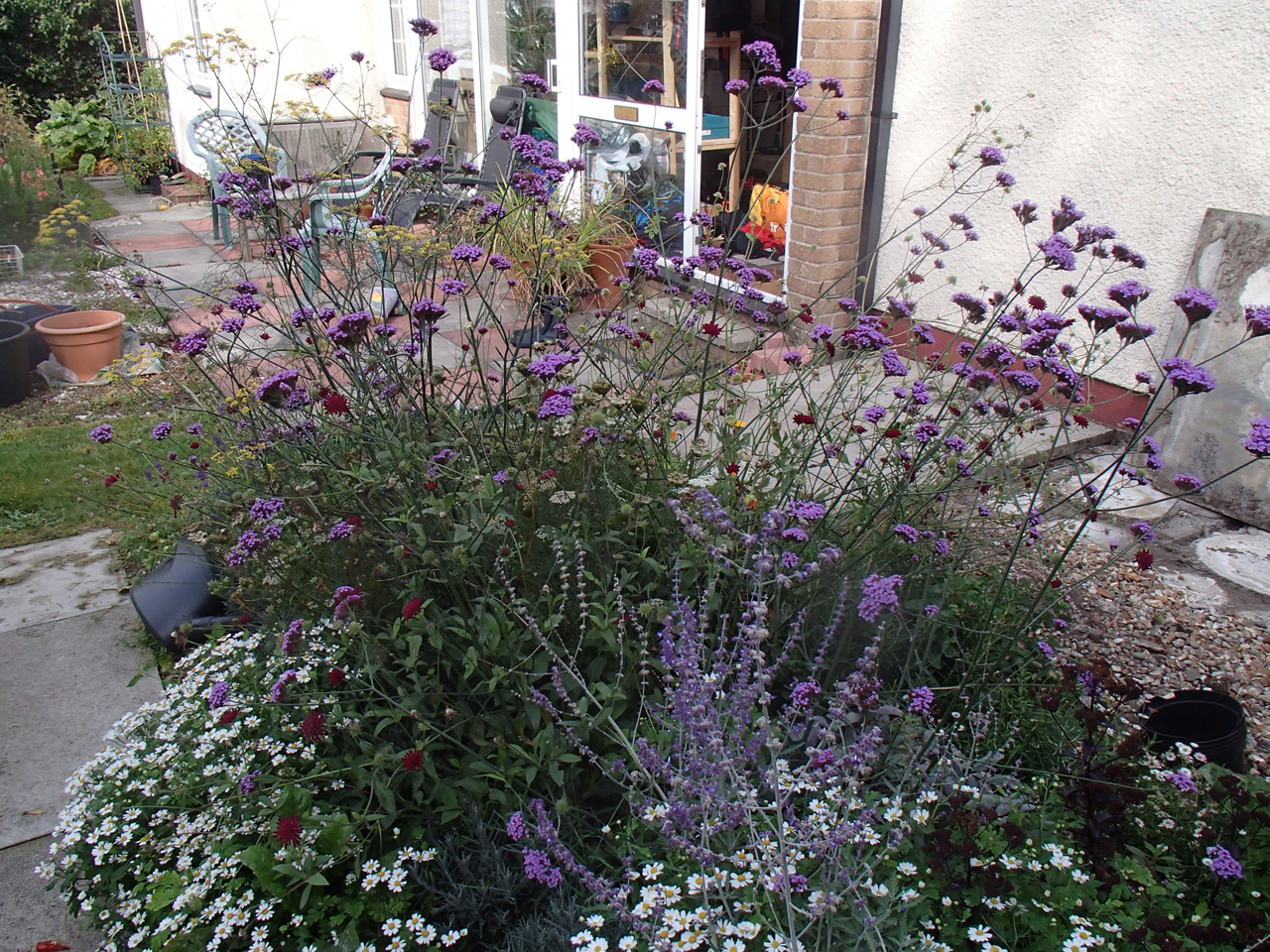 Apparently TNG strongly disagrees! Oops. The herb bed has gone from strength to strength since I planted it, and I have to keep ripping out the feverfew, which clearly loves it there, but change is afoot, and not just because I have undertaken to give in to TNG and move the V.B. 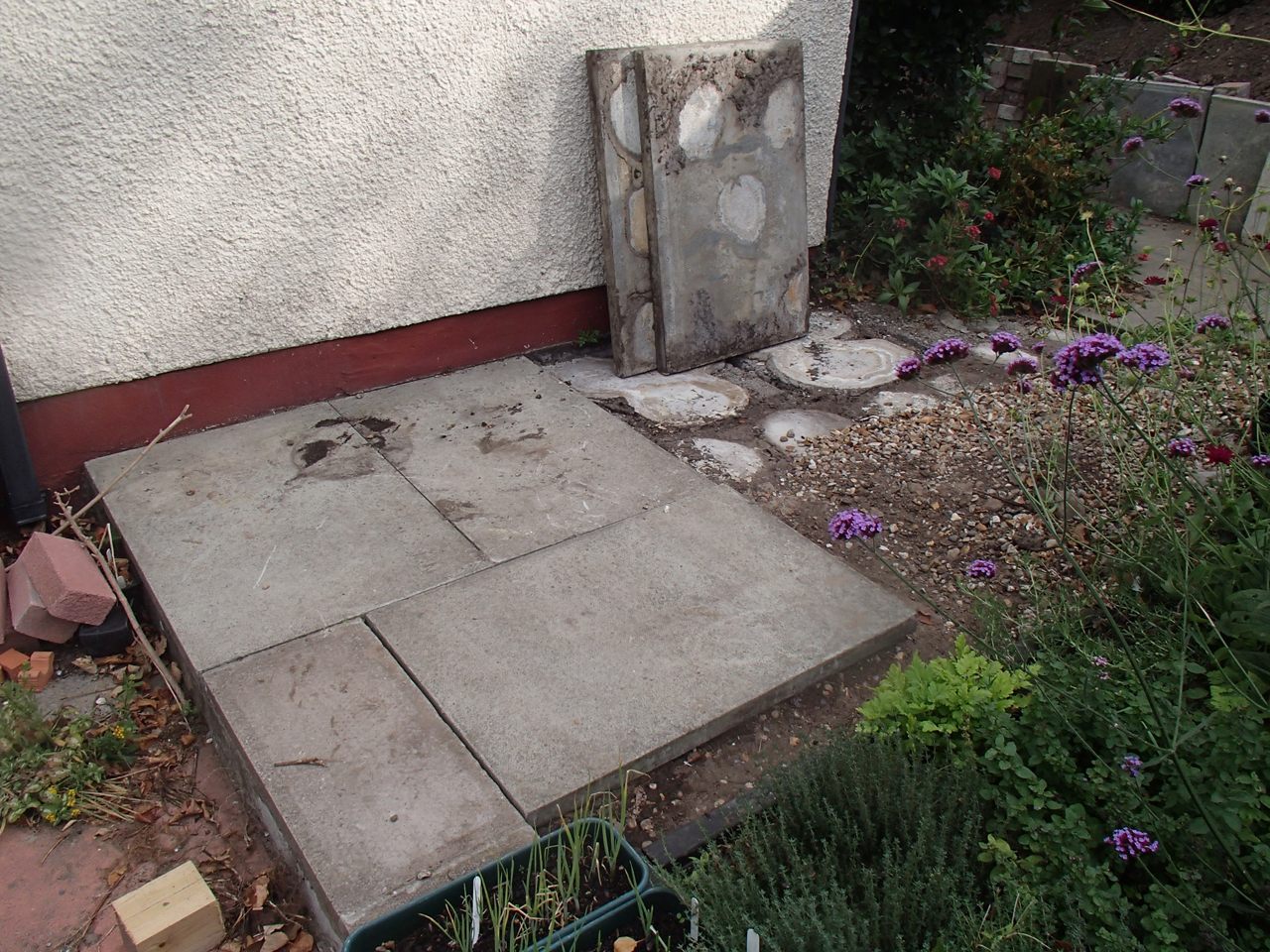 TNG has been moving slabs again, and not do shift the path away from the wall as we originally planned. Good thing he got distracted by sailing, as we have decided to solve the noxious problem of the leaking oil tank by switching over to an Air Source Heat Pump. Our lovely installer has put together a great deal for us, and we are putting in a very efficient model that should cope with a retrofit to a radiator system just fine, but the price is that it is rather large, and will sit right there, on those slabs. So the herb bed will get re-designed, probably next Spring, when we will make it into an ‘L’ shape and take the opportunity to widen the path that runs alongside the greenhouse, as it will become the only path into the garden. So I will enjoy the herb bed “As Is” for now, but not plant any bulbs or wallflowers. It will be a case of evolution rather than revolution, and I am hoping to persuade TNG that a but of tall waftiness would be just perfect for hiding the ASHP as you round the corner…

So, that’s my back garden at the end of September. Do check out the other posts linked to Helen’s End of Month View!