I did actually take the photos yesterday, at the end of April, but then ran out of time. Even though things seem to romping away in the garden at the moment, I don’t think the extra day has changed anything, not least because, apart from the obvious changes that come with Spring and all that wonderful accelerated growth, most if the changes are below the surface. I’ve dug an entire compost bin’s worth of compost plus a load of grit into roughly two thirds of the area around the pond, about 3 years too late, but very satisfying for all that. 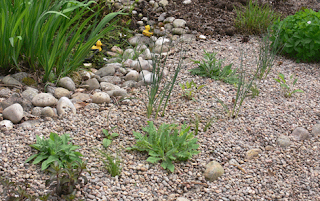 This was the first area to see major change – I finally got around to digging up the very pretty but also very invasive lysimachia that was here, added loads of lovely compost and grit, and then re-planted with perennials I have grown from seed (or bulb!). Echinacea purpurea, Stipa tenuissima, Alium  sphaerocephalon, Sanguisorba tenuifolia and a lovely little ice plant that I cannot for the life of me remember the name of. No idea whether it will work, but it’s exciting, part of my whole “grow a garden from seeds and cuttings” project. 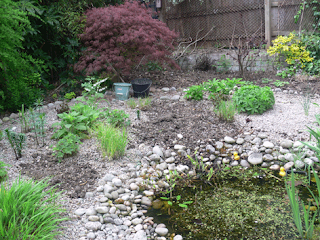 Here you can see the bare patches where I haven’t yet replaced the gravel mulch. The Veronicastrum is growing back strongly, which is a relied because I moved it at the end of last year and in a hurry. The Glimmer of white is a Dicentra that finally got a home after languishing in a pot for 2 years, and seems very happy. I also dug up an astrantia, Hadspen’s Blood I think, and divided it into three and spread it through the middle. One of the problems with this area has been that I originally went for a late summer planting scheme, supposedly “Prairie” inspired. Apart from putting everything way too close together and using too many grasses in proportion to the perennials, it looked really boring for large chunks of the year. I can’t afford that in such a small garden, so I have been gradually moving large Miscanthus and Eupatoriums elsewhere and adding things for colour and interest in Spring/early Summer. I still need to plant loads of bulbs this autumn, I fancy drifts of crocus, but I am also hoping that the astrantias help to fill later on. I love the structural mounds of leaves they have, even after flowering, and they are great in a vase too. Probably the biggest change, though, apart from the beautiful acer coming in to leaf, is that I got around to removing the ghastly blue trellis, replaced it with willow, and planted a rose and several clematis. All looks very bare right now, but hopefully in a year or two it will all be lush and beautiful, and provide a good backdrop for the pond area. 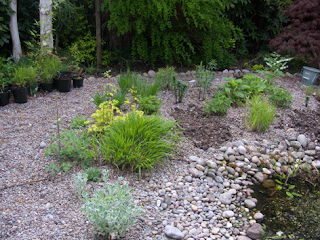 The left hand end is what has changed the least this year. I added more aquelegias to the golden leaved one I already had, and they are all on the brink of flowering, but otherwise no real change. There are lilies sunk in pots towards the back, and I have various lobelia and snaps, verbena bonariensis and more echinacea, hopefully some monardas, to add in once the plants have bulked up a little. I’m also thinking about planting out some of the tulips I’ve had in pots this year, as now that I have improved the soil and drainage, I can believe they might survive… Progress, visible and invisible.