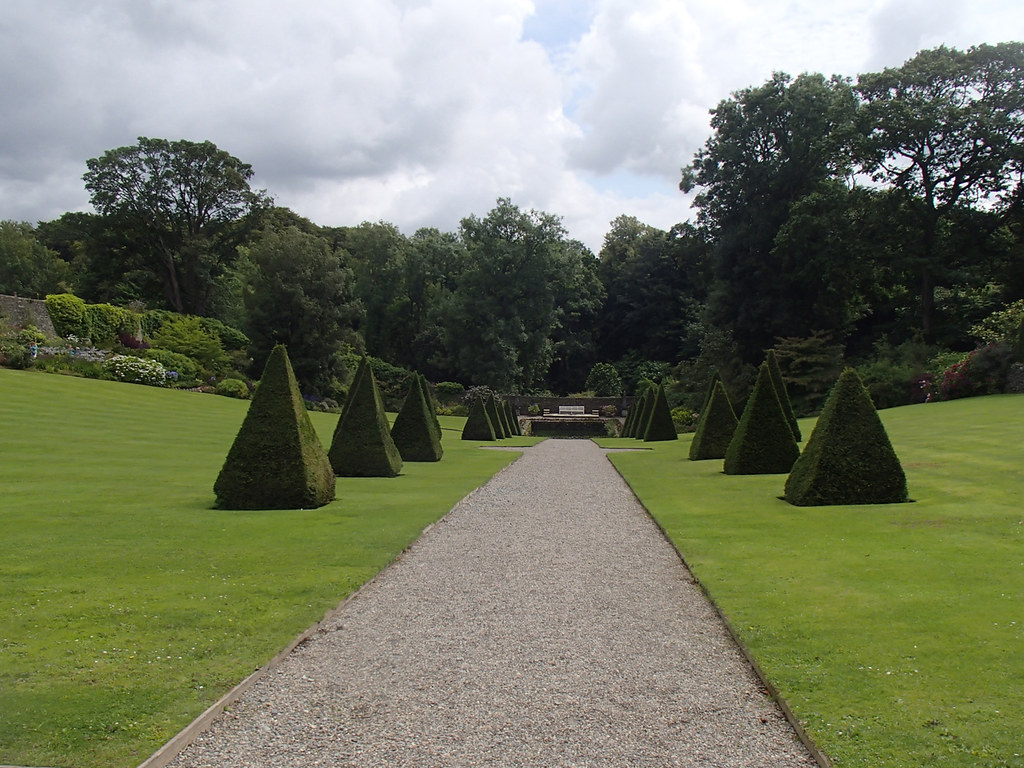 When I began the attempt to recover my gardening mojo, one of the first things I did was visit Plas Cadnant garden. The current owner, Anthony Tavernor, bought the 200 acre estate back in 1996 having fallen in love with the place, despite it being a tangle of weeds, brambles and broken walls. He embarked on an ambitious restoration programme, determined to re-establish the gardens as a must-visit destination for plant lovers and garden enthusiasts. Actually, restoration is the wrong term, as although he is gradually restoring some of the old paths through the river valley, he is also creating new water features, and has no plans to restore the walled garden as a kitchen garden. Instead, it is a riot of colour contrasting with a broad lawn and topiary. Anthony is determined to make the garden self-sustaining, and to ensure that it has a future long past his own tenure. He does most of the gardening himself, with a couple of helpers, and is very friendly and approachable. I fell in love with the whole place, and bought a season ticket. 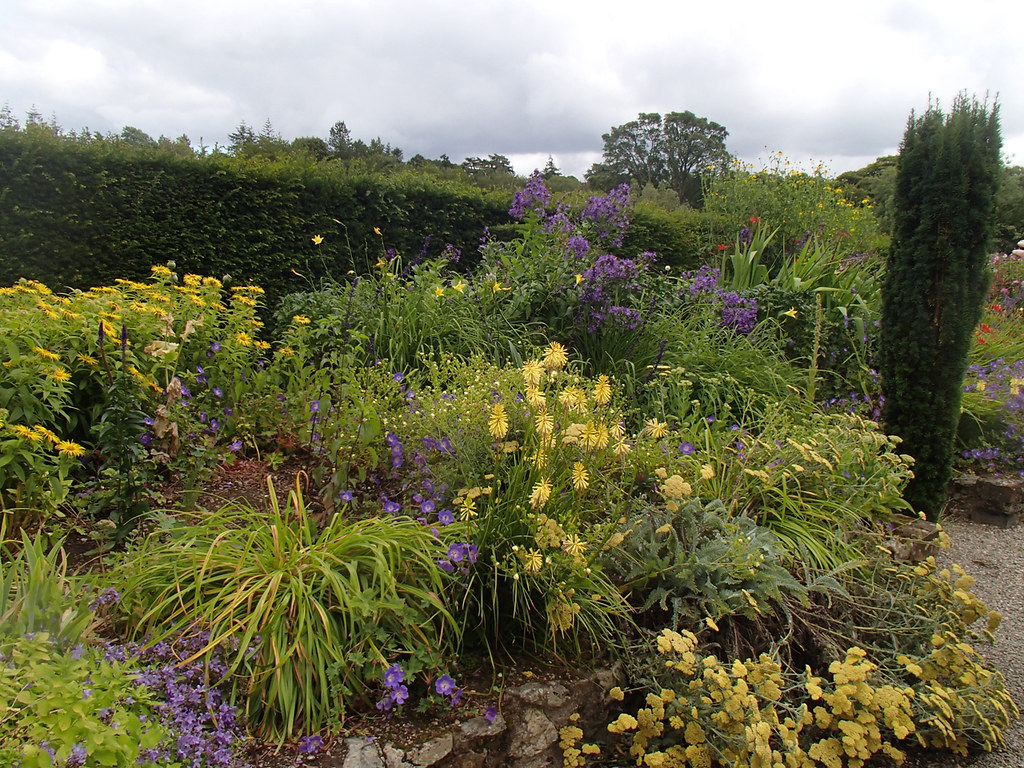 The riot of colour in the borders of the formal area of the garden where a delight and inspiration, but it was the foliage planting I lost my heart to. As you wander down past the formal areas towards the valley bottom it all starts off rather civilised. 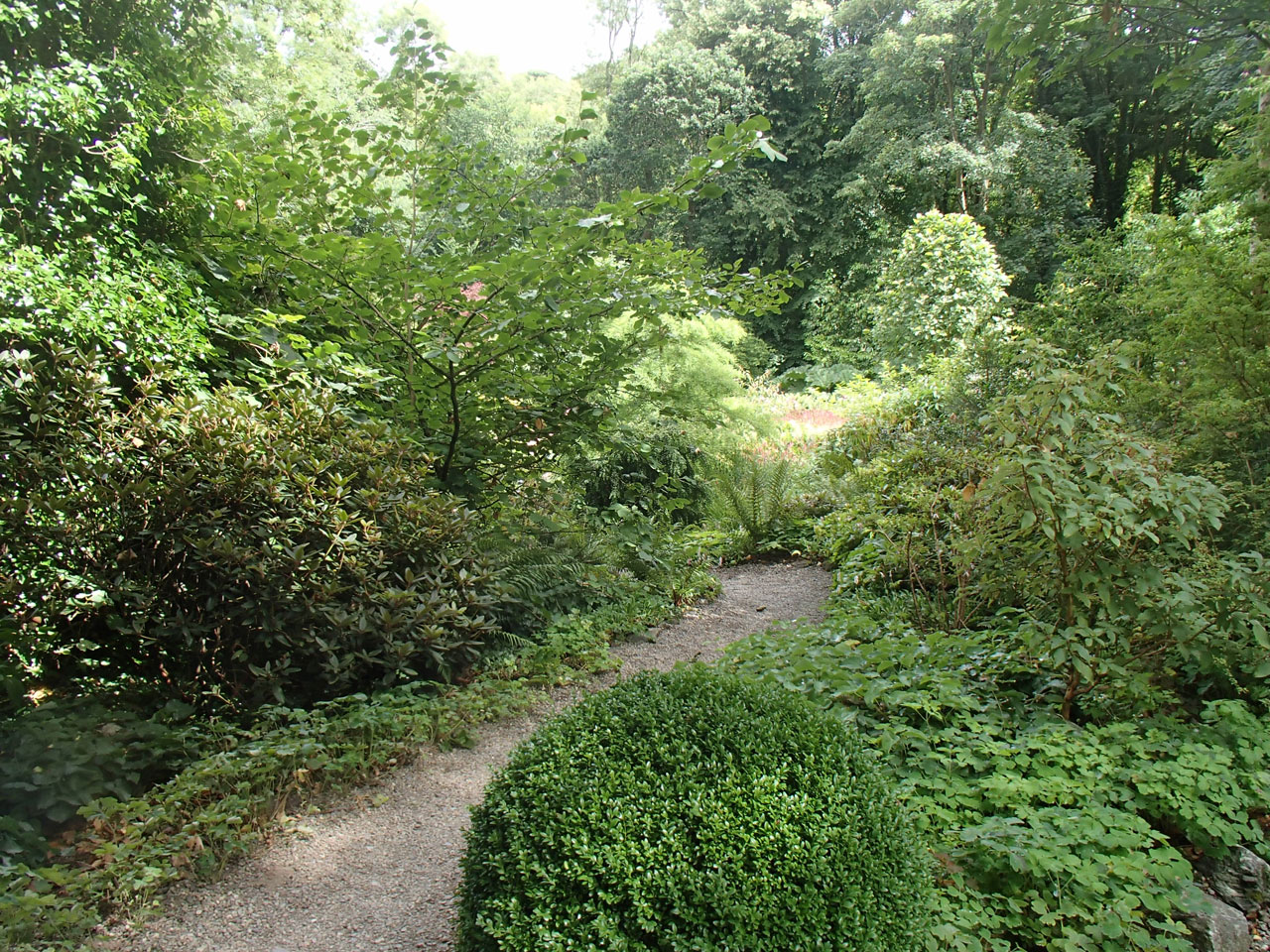 The further down towards the sound of water you go, the wilder the planting gets. I say wilder, but it is still clearly carefully planned out, and it put a smile on my face that hurt, I held it so long. Everywhere I looked there were delightful constrasts of foliage shape and colour. 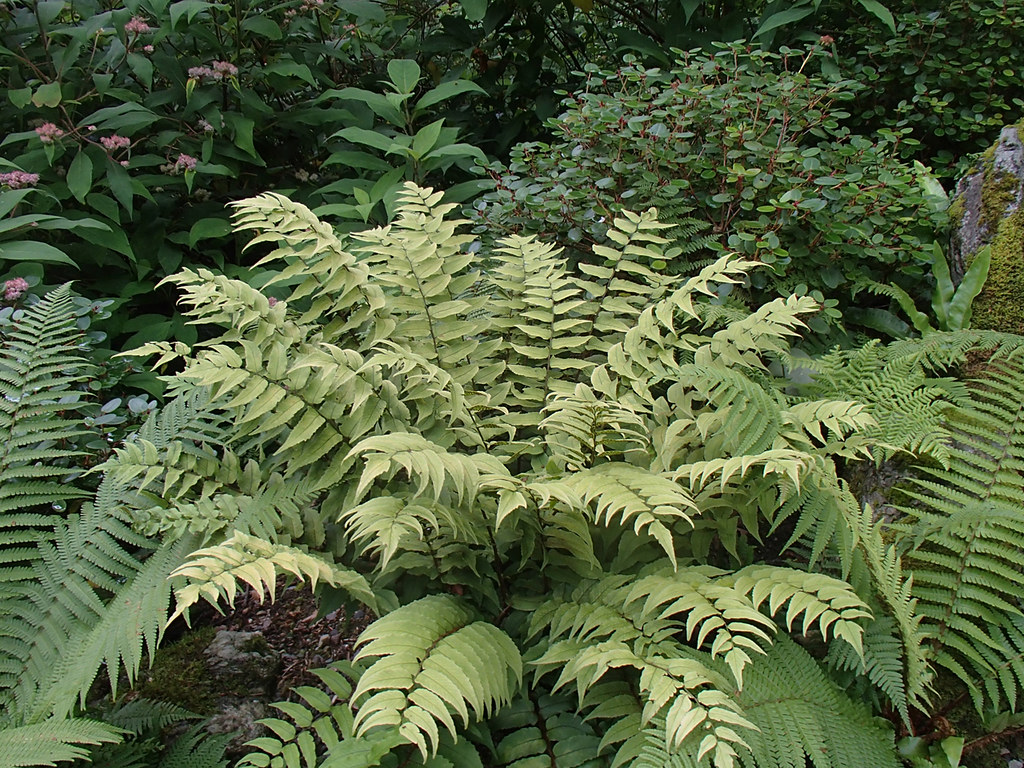 Mossy tree trunks and walls contrasting with ferns and herbaceous plants. I haven’t a clue what most of them are, and this is a damp acidic area, so a lot of them aren’t suitable for my garden anyway. 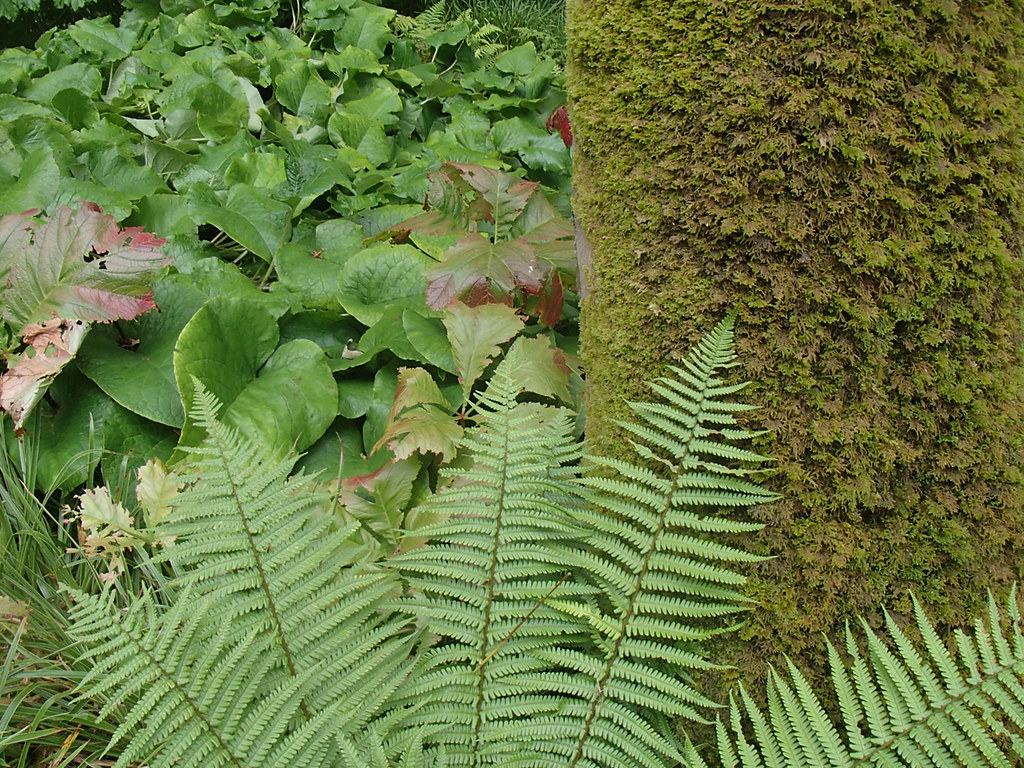 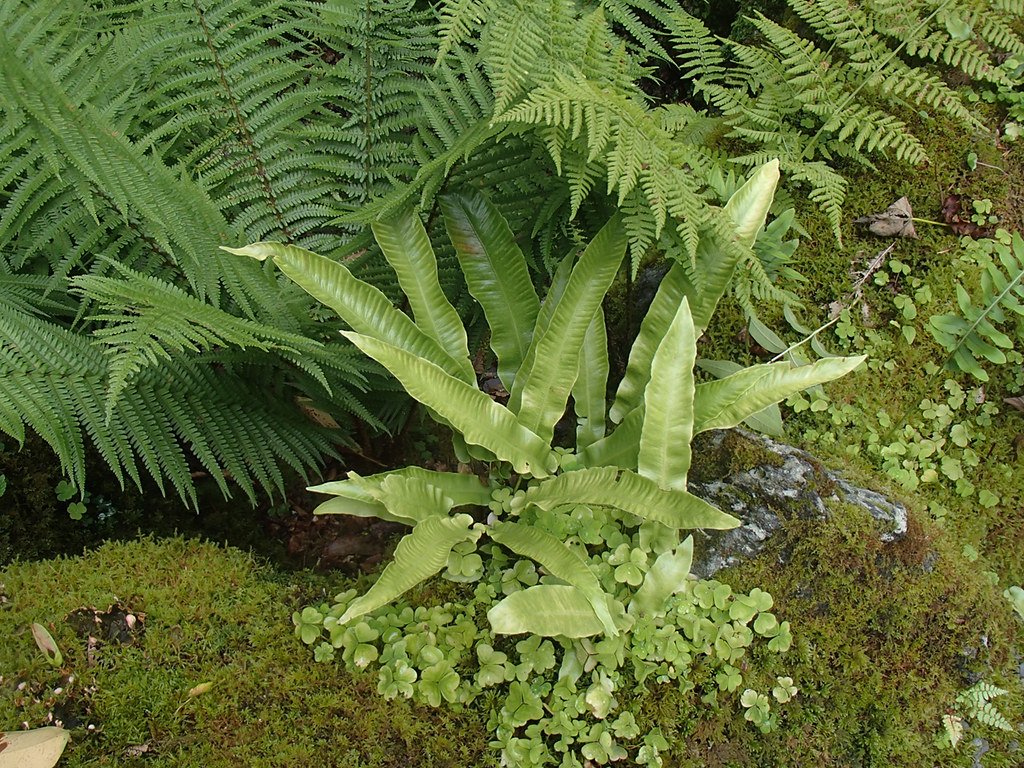 But that didn’t stop me from being inspired. 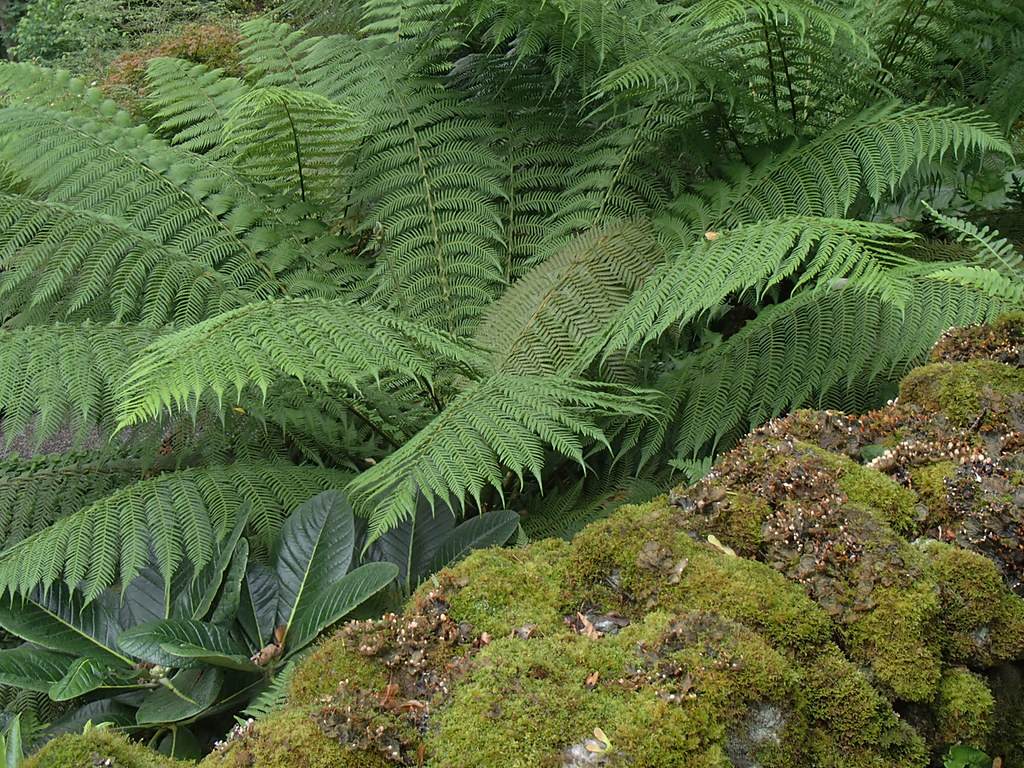 Even if tree ferns are a pipedream.

Despite the beautiful little vignettes I was forcibly reminded of how effective blocks and rivers of contrasting foliage are. 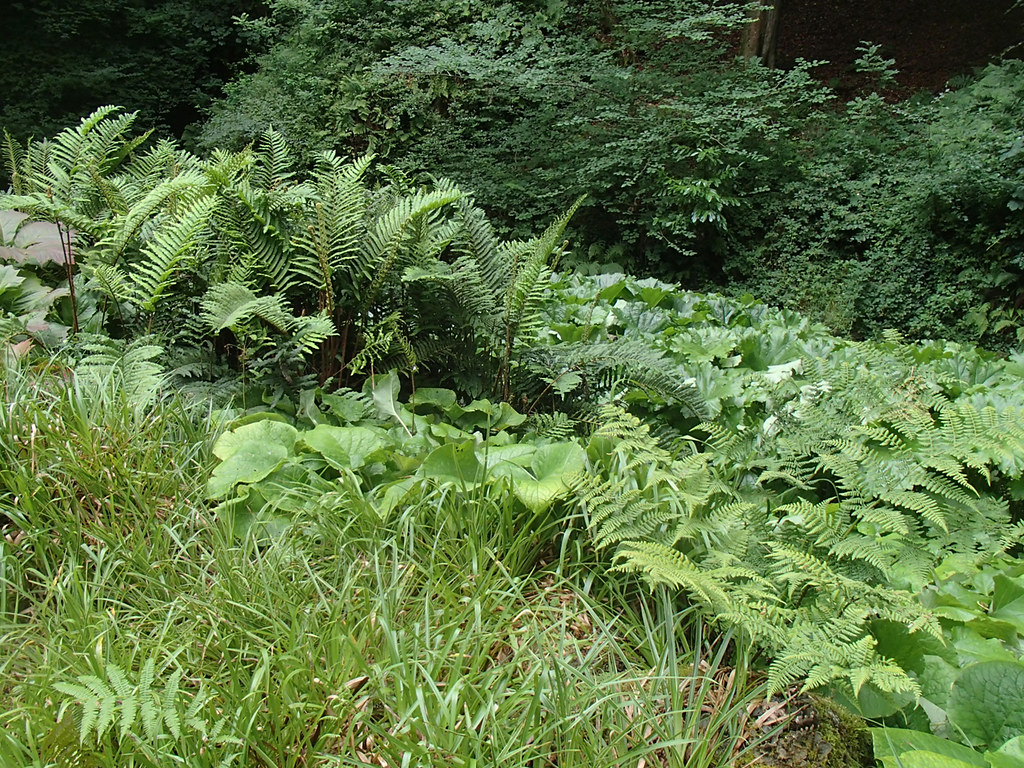 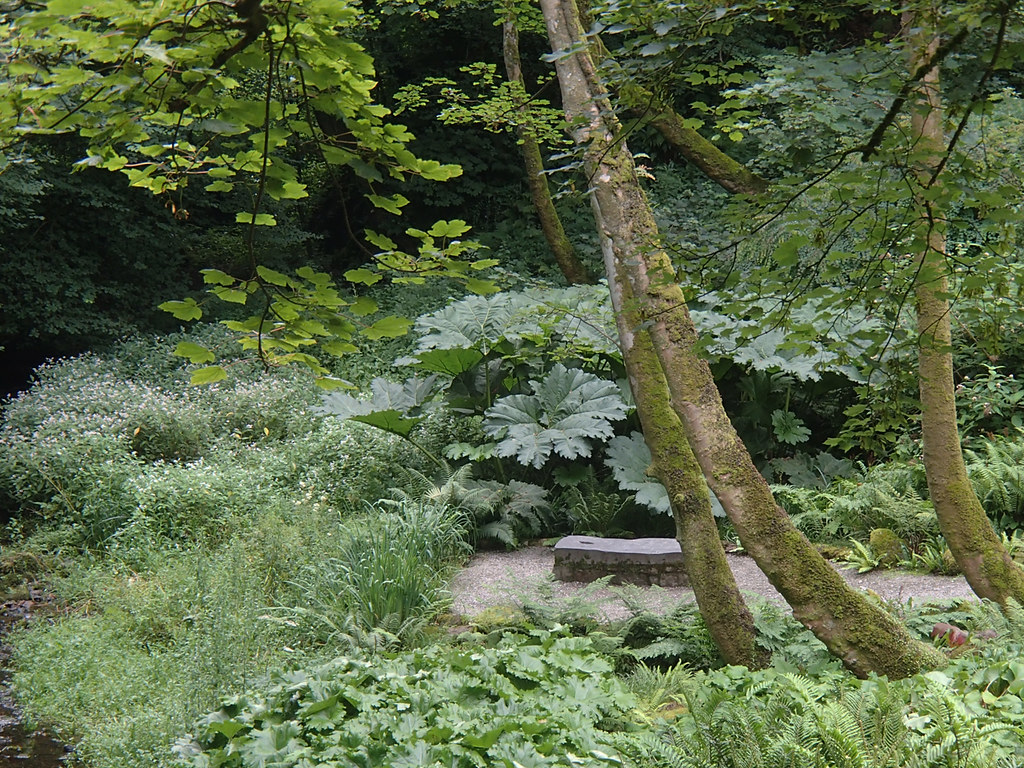 This is gardening on a huge scale, and on an inhospitable slope. 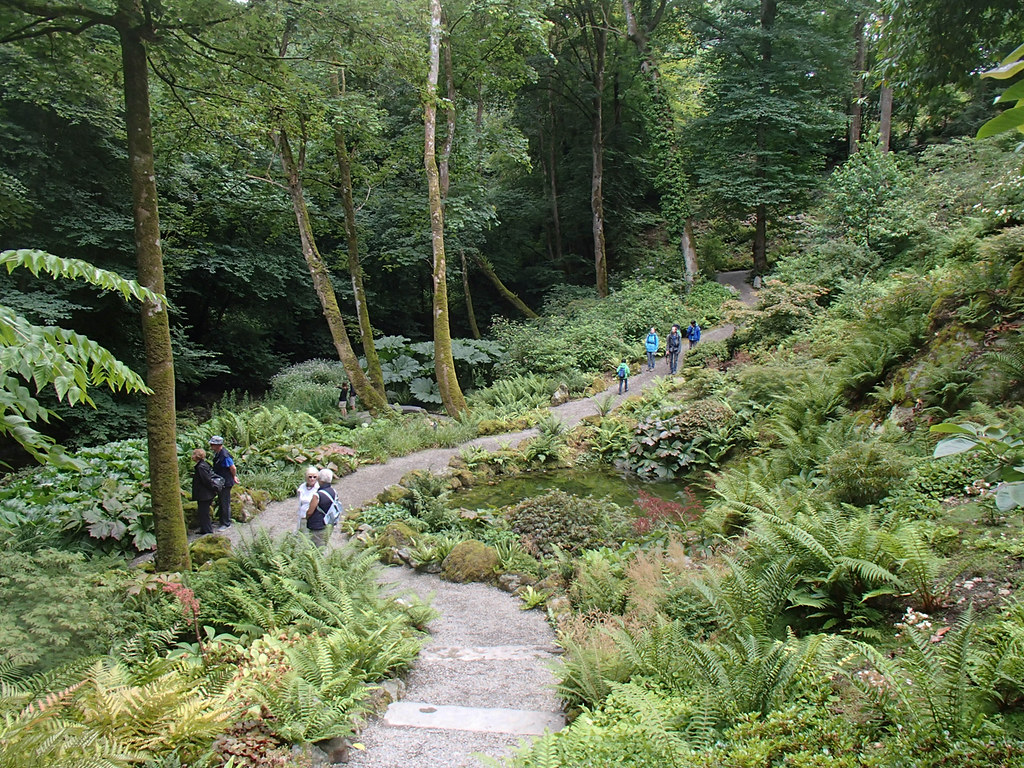 There is lots of water too, trickling, tumbling, reflecting. 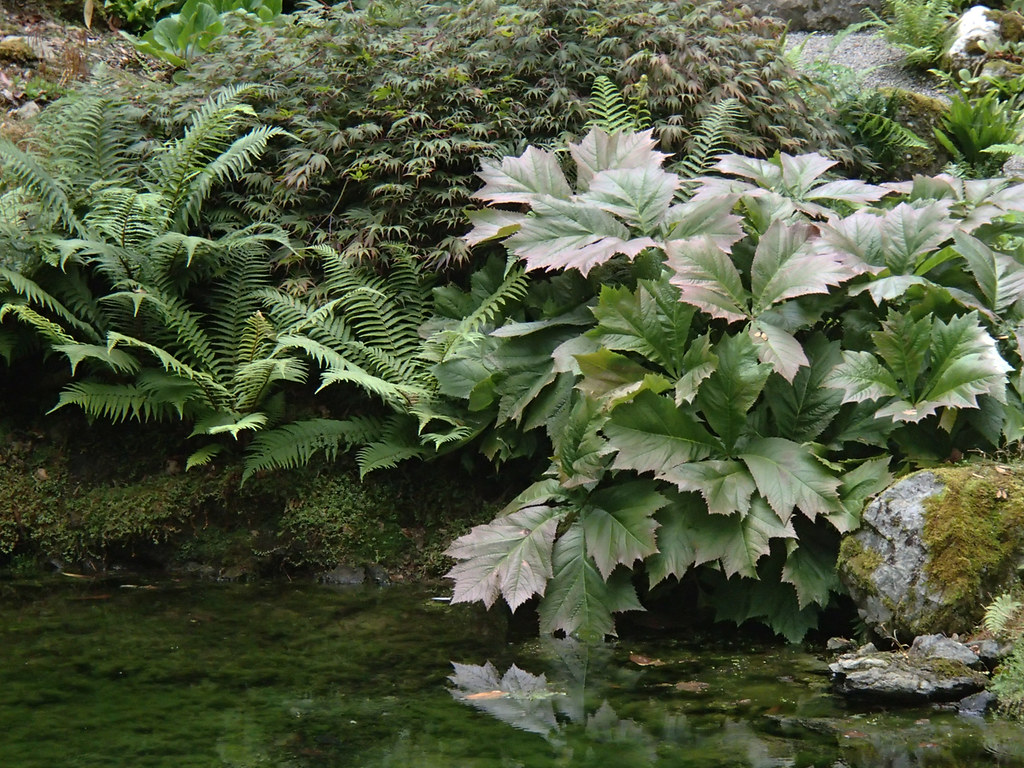 Once you reach the bottom of the valley you can wind your way towards an even wilder area, where apparently the bluebells and snowdrops are spectacular and you might catch a glimpse of a red squirrel. 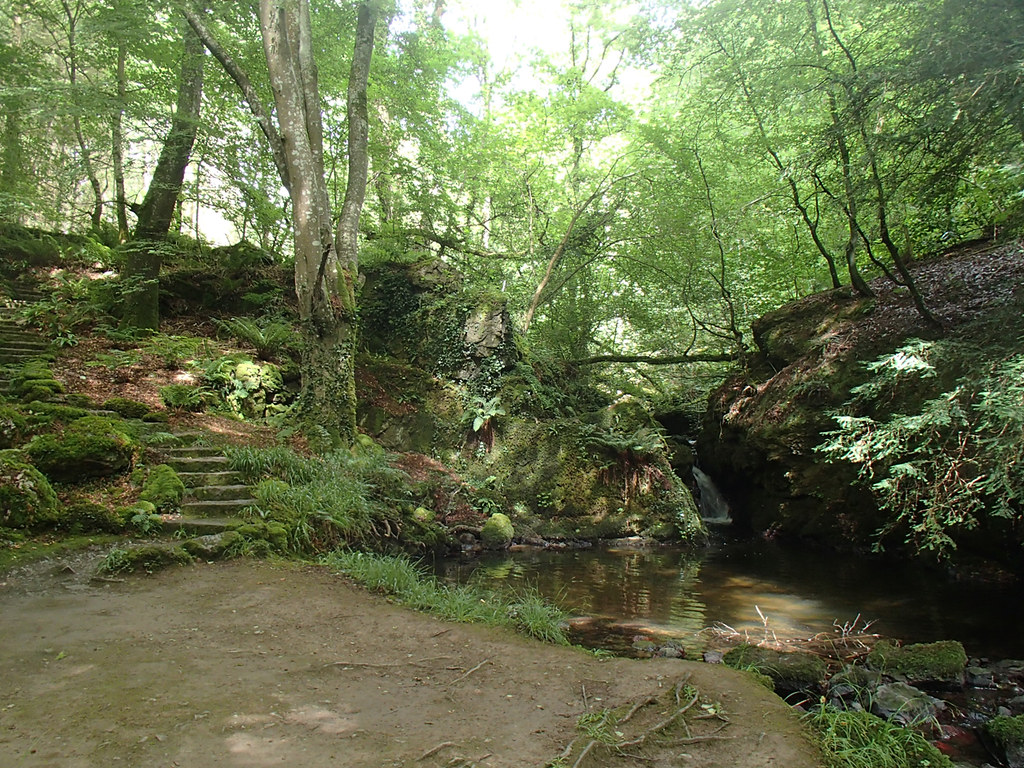 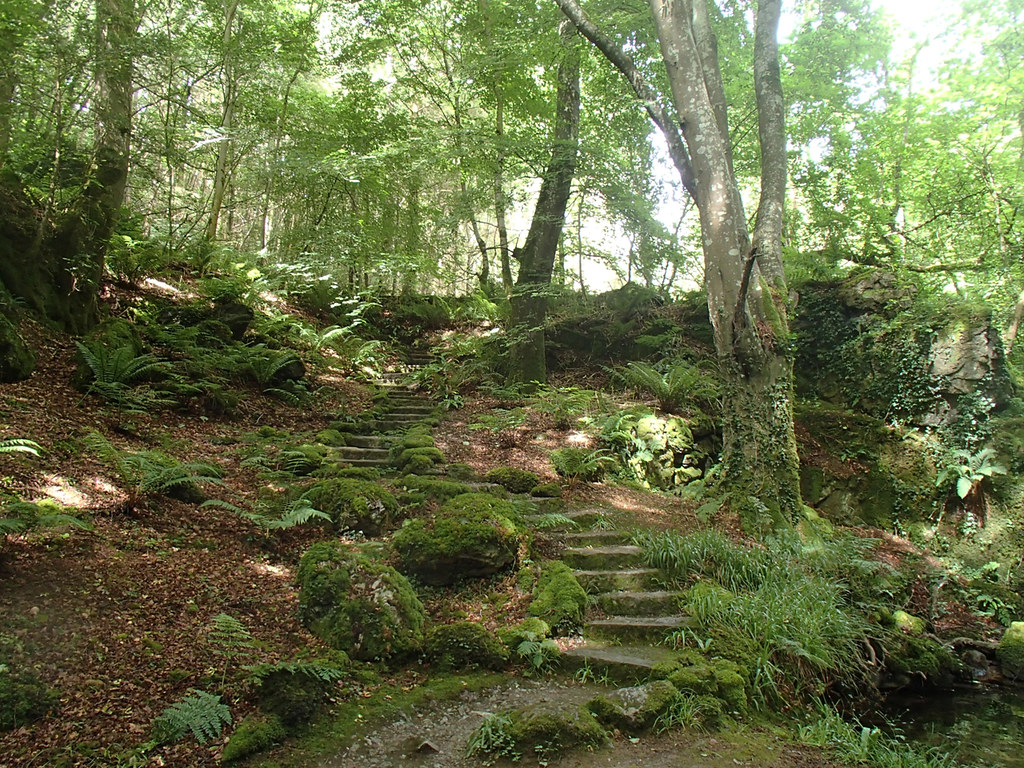 It was strange to emerge from this green and wild area back in to the more managed space, but here again there was plenty of foliage to delight the eye. 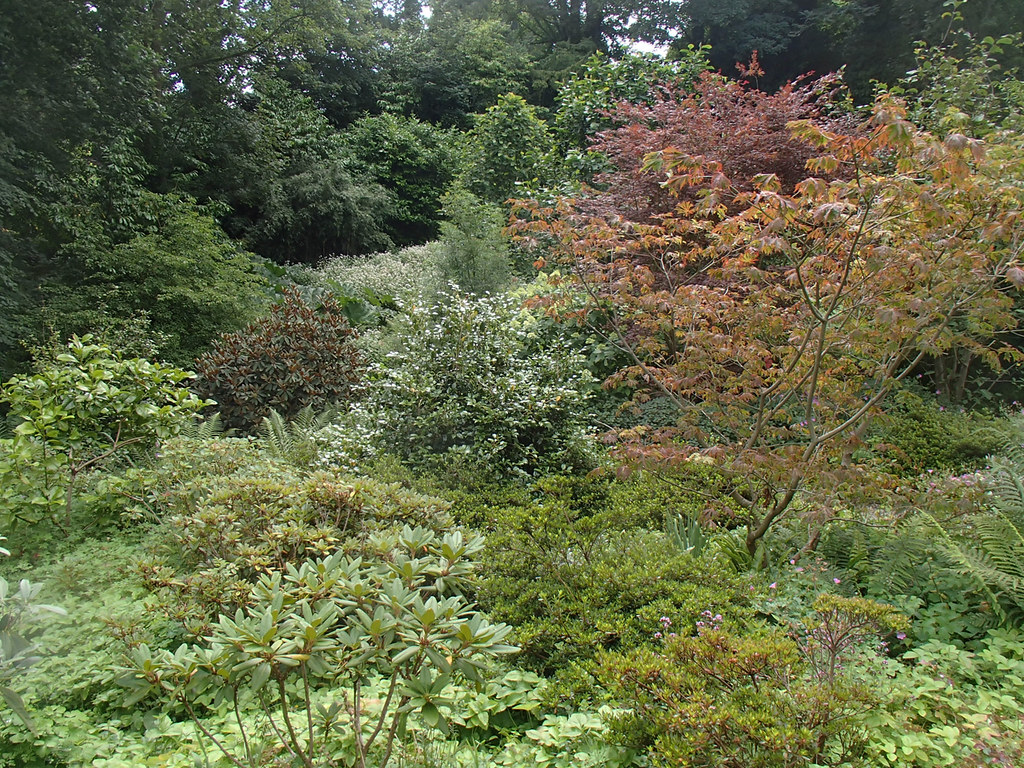 I have an area in my front garden, near the house, that has been causing me problems since I first ripped out the sickly rhododendrons that filled it when we arrived here. I had a clear vision for it, that involved blocks of contrasting evergreen foliage livened up by bulbs and aquilegias. I planted ferns, epimediums and Tellima grandiflora, and sat back waiting to be wowed. The area is north facing, and therefore gets the brunt of the salt-laden winter storms, and lies in the shadow of the house, a rather unforgiving shade really, that only gets brief shafts of sunlight from October through to February. I thought the epimediums had all died, but I did recover two of the three, and have re-planted them elsewhere in the hope that they will settle in happily. 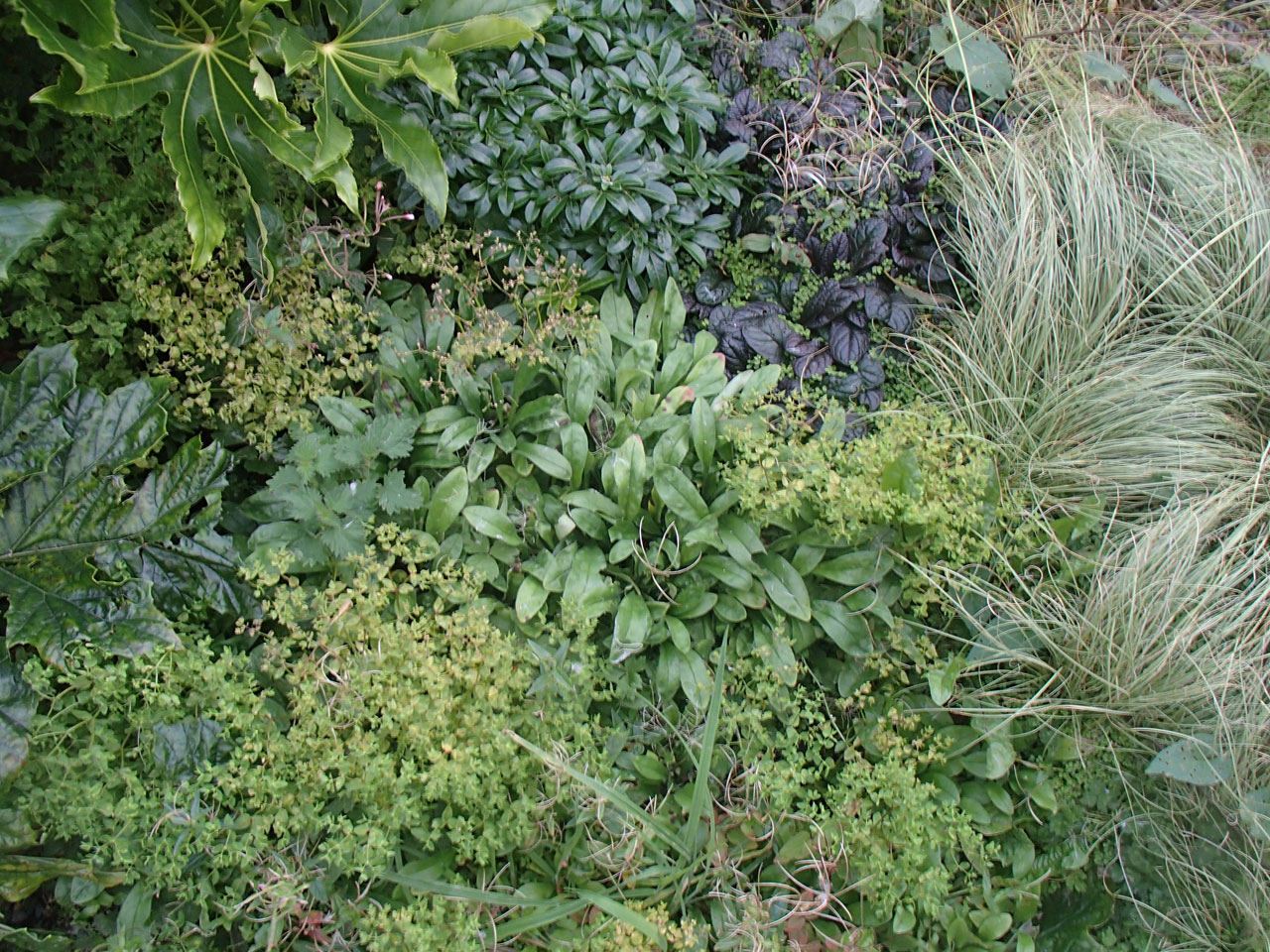 The very back of the area is less hostile, and forget-me-nots and Stipa tenuissima self seed with gay abandon, so although I want to improve it, I can live with it for now. Elsewhere, the Tellima has survived as has the Polystichum tsussimense, but since I pulled out the foxgloves (for some reason they just look wrong here) I have bare patches to fill. 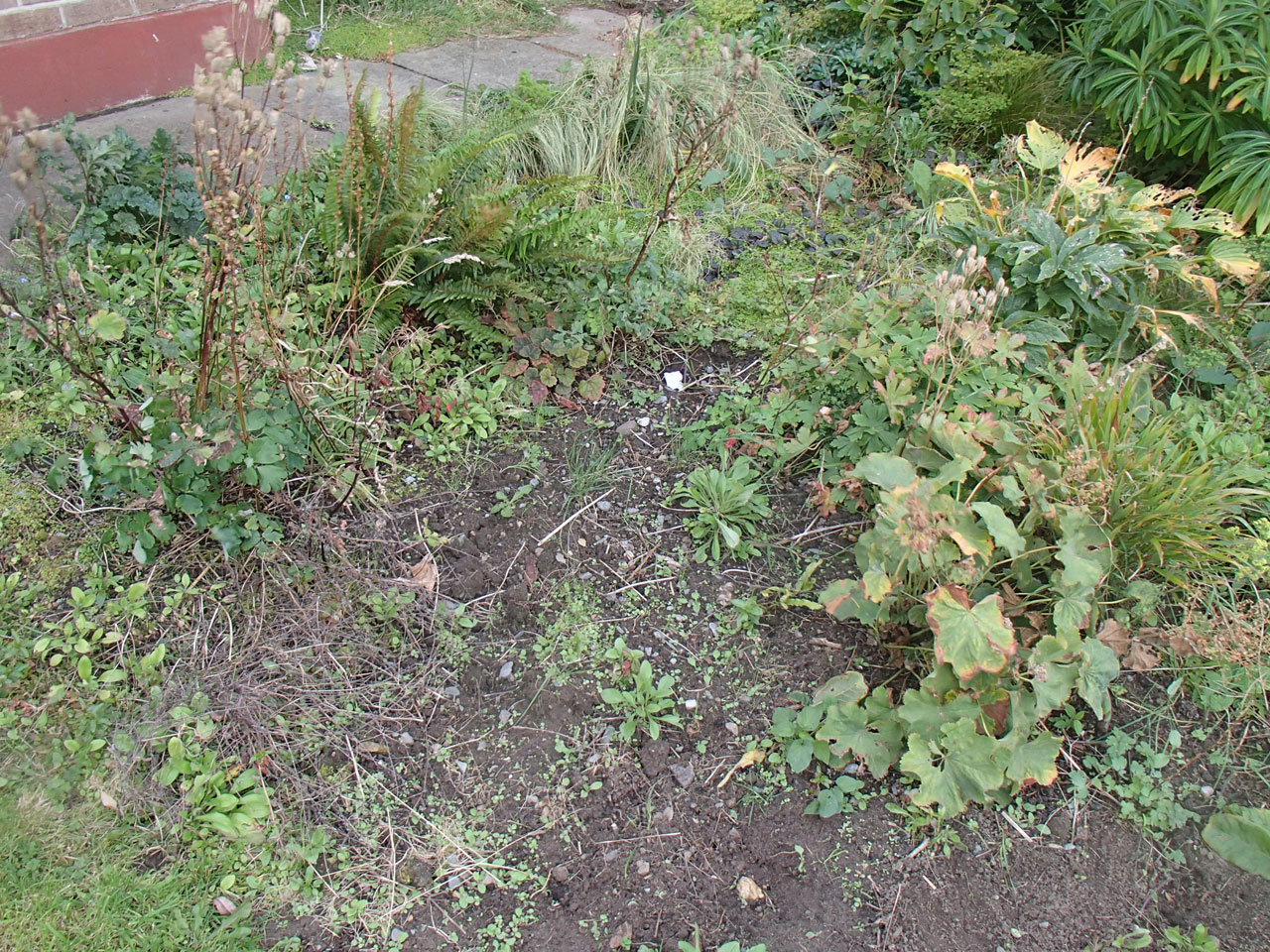 Further round, where there is more sun, I have widened the bed. More forget-me-nots are self-seeding, and I have moved an Alchemilla mollis and planted a cutting from Stachys aethiopica ‘Danielle’, but there are still gaps. I want to add at least one Carex testacea, the bronze-tinged foliage picks out the colour of the flowers on the Euphorbia mellifera and the new leaves of the Amelanchier perfectly, something I have tried and failed to capture on camera. 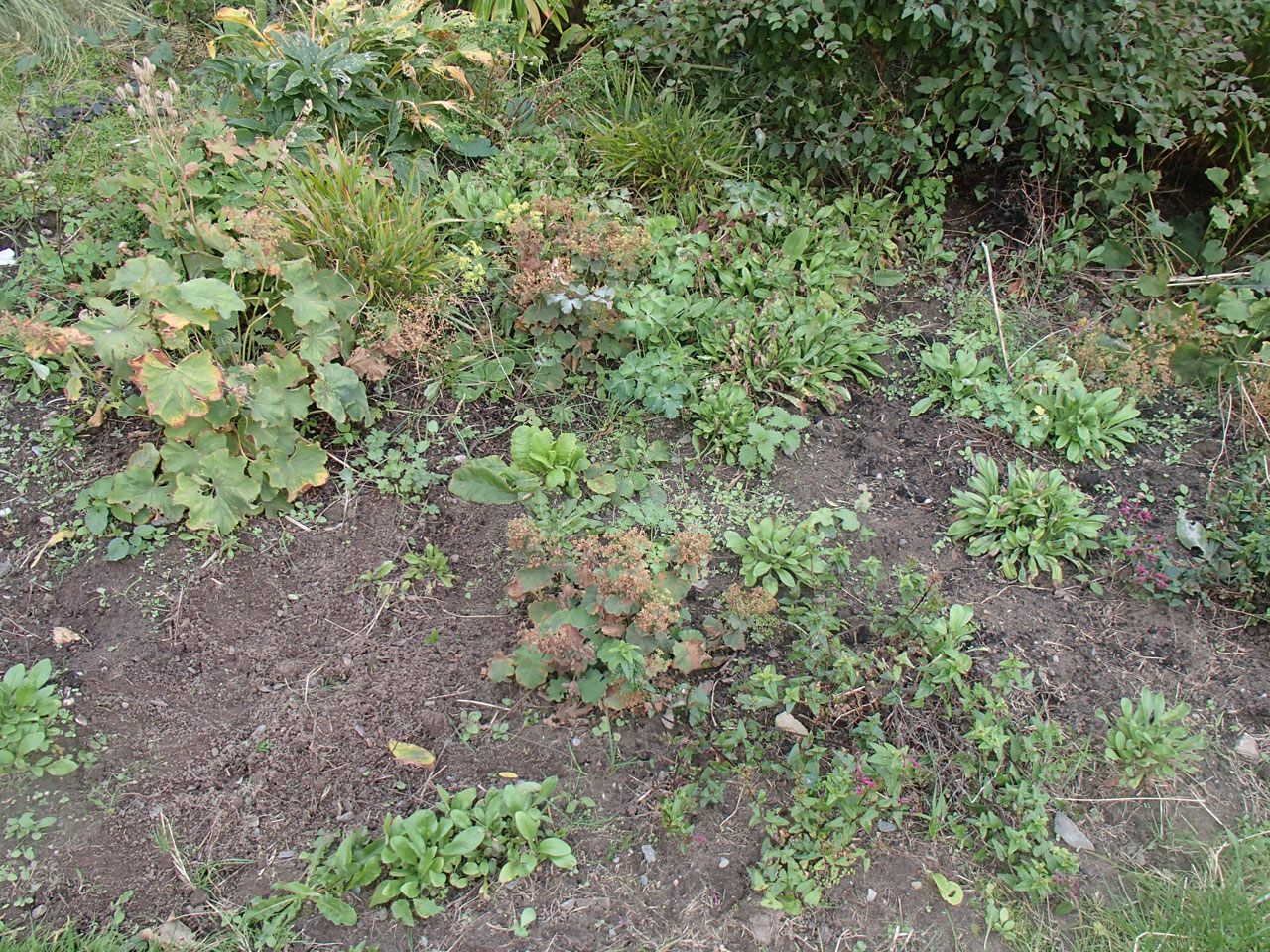 Inspired by Plas Cadnant, I want to have another go at blocks of contrasting foliage. My thinking cap is on. I want to give epimediums another go, and perhaps Luzula nivei. I adore Asarum europeum, which grows wild in the verges closer to the Menai Straits. I fear it needs a more acidic soil than I can offer though. But I am determined to try again.

I am joining Christina for her celebration of foliage, so if you haven’t already, I recommend you pop over there and check out other posts on all things leafy.

Older
Newer
Wordless Wednesday: Who am I?! (older)
A case of mistaken identity: Tree following in October (newer)