Have you ever gone to visit a friend you haven’t seen for a long time, and found that your excitement began to get tinged with a little nervousness? I felt did actually feel a little nervous approaching my tree after a 5 month hiatus. I had no idea what to expect. I don’t know what my tree got up to during the summer months. I’ve done loads of walking this year, but it was all along the cliffs, somehow I never got round to adding on the short walk up the river valley as well. The last time I saw my tree, back in May, it still didn’t have any leaves, and I was still calling it an alder based on the buds. Except that then Laura suggested that it might be an ash instead. 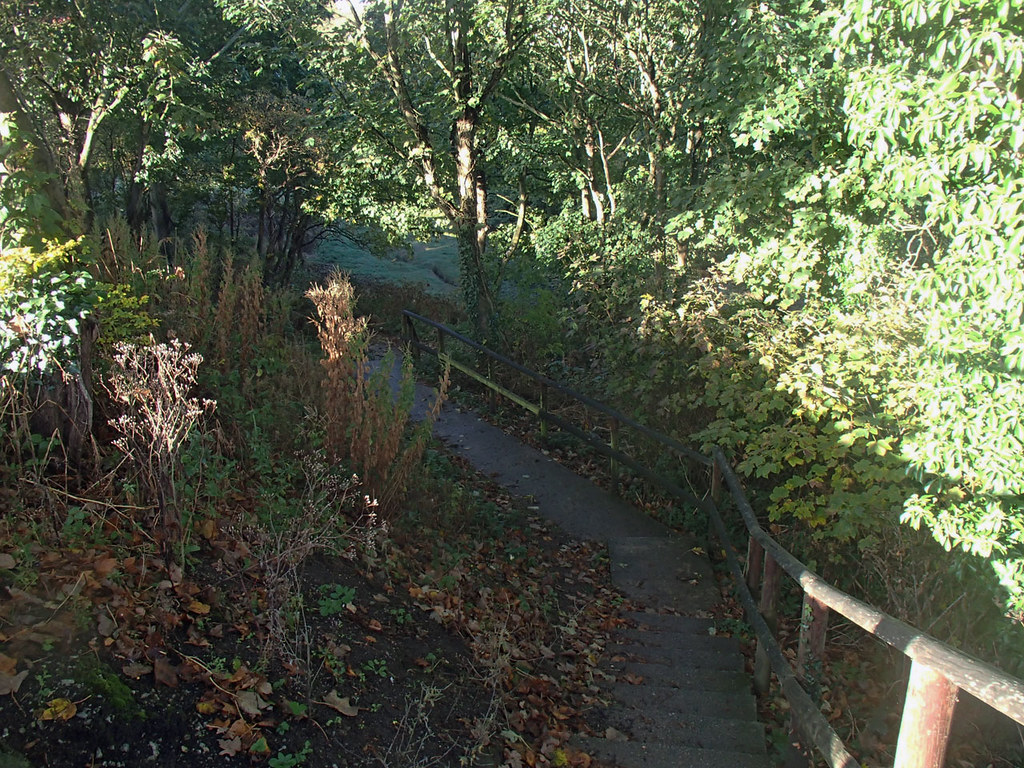 So there I was, on a bright sunny morning, walking down the steps again into the river valley. It all looked rather scruffy really, and damp, thanks to the overnight rain. Not quite autumn yet but decidedly tired around the edges. My first surprise was that the stump at the bottom of the steps is sprouting! Determined thugs, those sycamore trees… 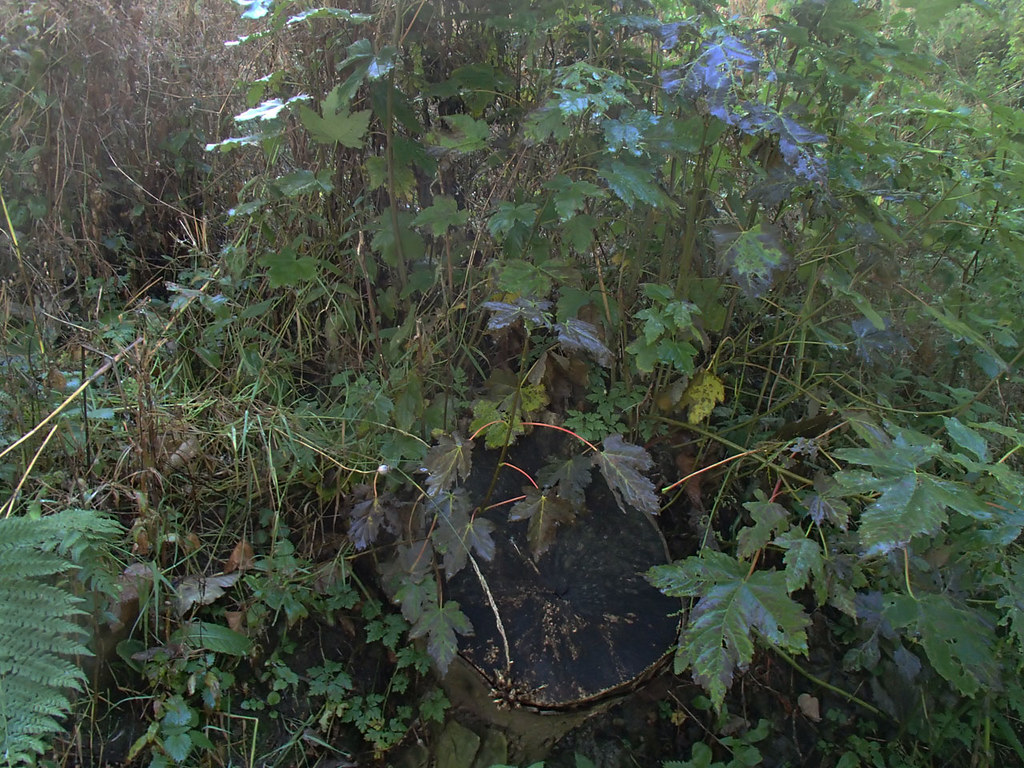 Its tricky taking photographs in the valley at this time of year, when the light is soft, first thing in the morning and again in the evening, it doesn’t really reach the valley bottom. But if you visit during the middle few hours of the day, as I did, you get blinded by the sun on the one side of the river and the contrast levels are annoyingly high. Ho hum. Still, the human eye is able to cope with it all quite happily and I was soon enjoying the sight of my sentinel tree, with all its knobbly bark. 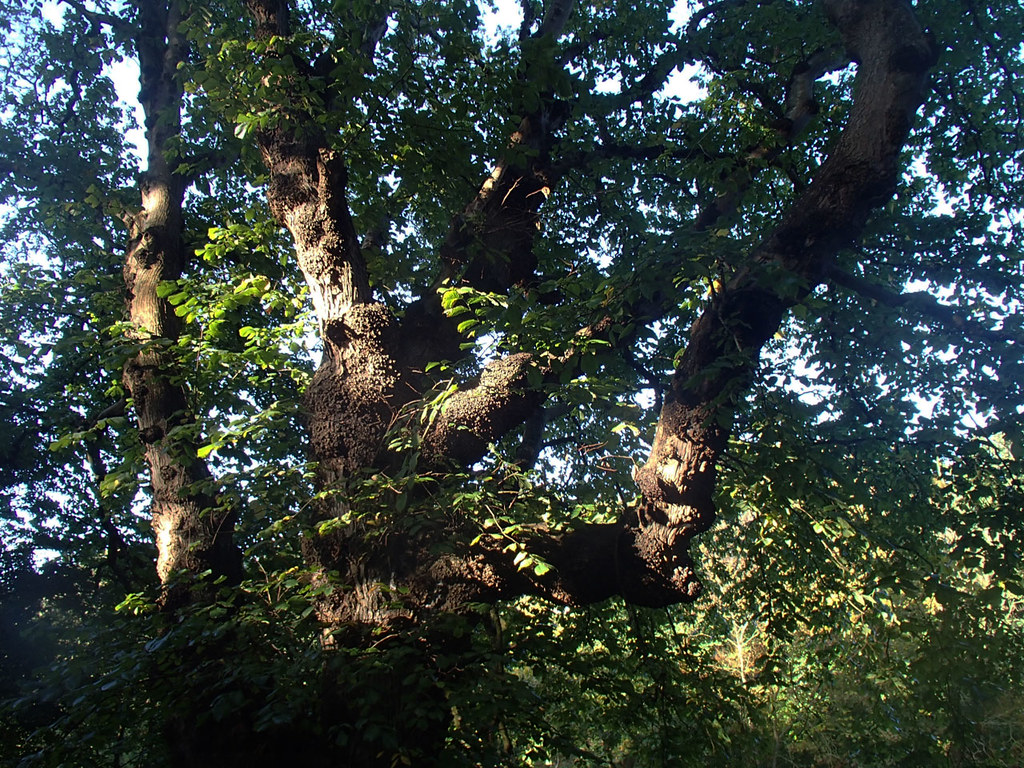 My sentinel is an alder. At least, I think it is, judging by the leaves, I’m not very good at this tree identification thing. Part of the reason I thought my tree was an alder too was because they both have the strange growths on the bark. 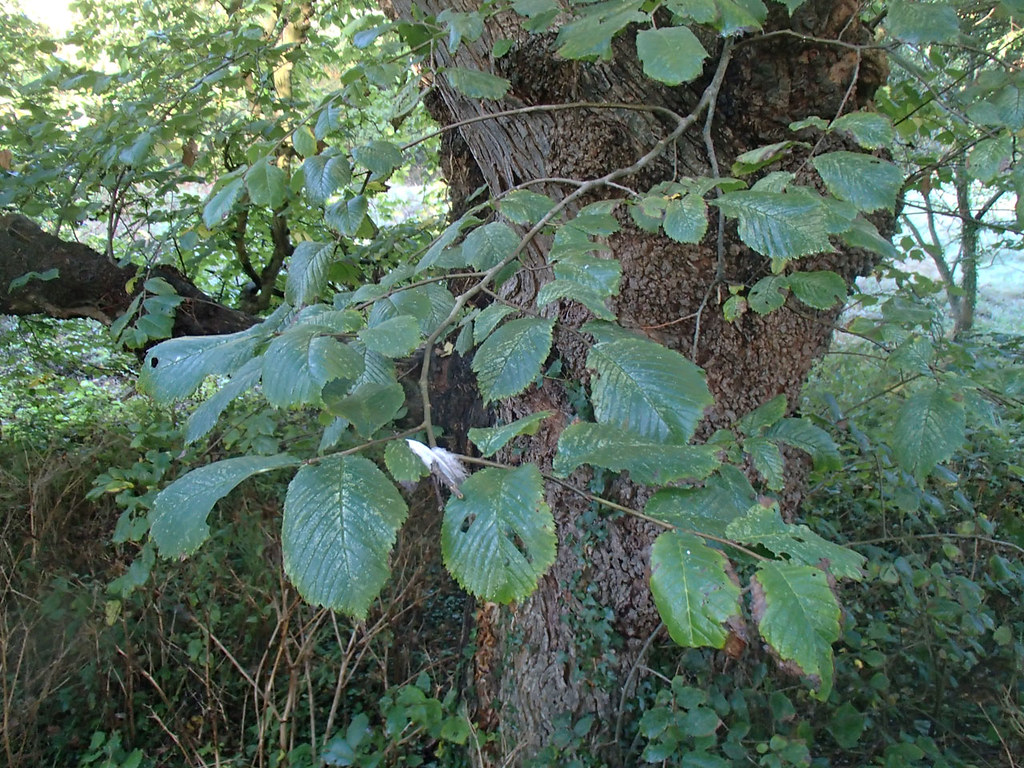 As I neared my tree I began to spot a little bit of autumn colour. Nothing dramatic, but there again this side of the river always feels a little more understated, wilder, than the other. 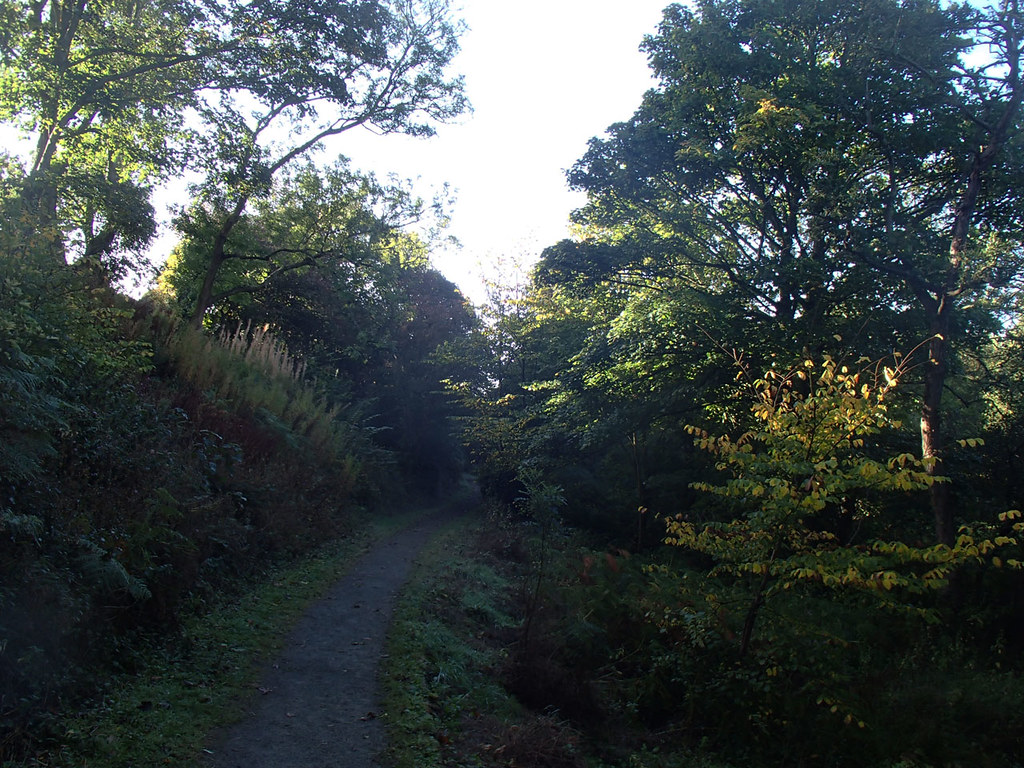 And suddenly, there it was. Or they were, since my tree has two trunks, and grows very close to a third. I nearly picked the third, because it had a nestbox on it (which you can just see in the photo below, peaking out behind the leaves). I’m glad I didn’t though. I already knew it wasn’t the same kind of tree as mine, the barks were so different. What I hadn’t realised was that it is a sycamore. I don’t like sycamores. I spend hours weeding out their seedlings. There are loads in the village, probably because they cope with salt-laden winds well, but they produce so many seeds! And the tree sap does horrid things to our car, parked underneath. But I digress. This was my first glimpse of my tree for five months, and it was immediately obvious that Laura was right. An ash, not an alder. But you will have to wait for the proof, because the photos I took of the leaves from this side of the river were rubbish. 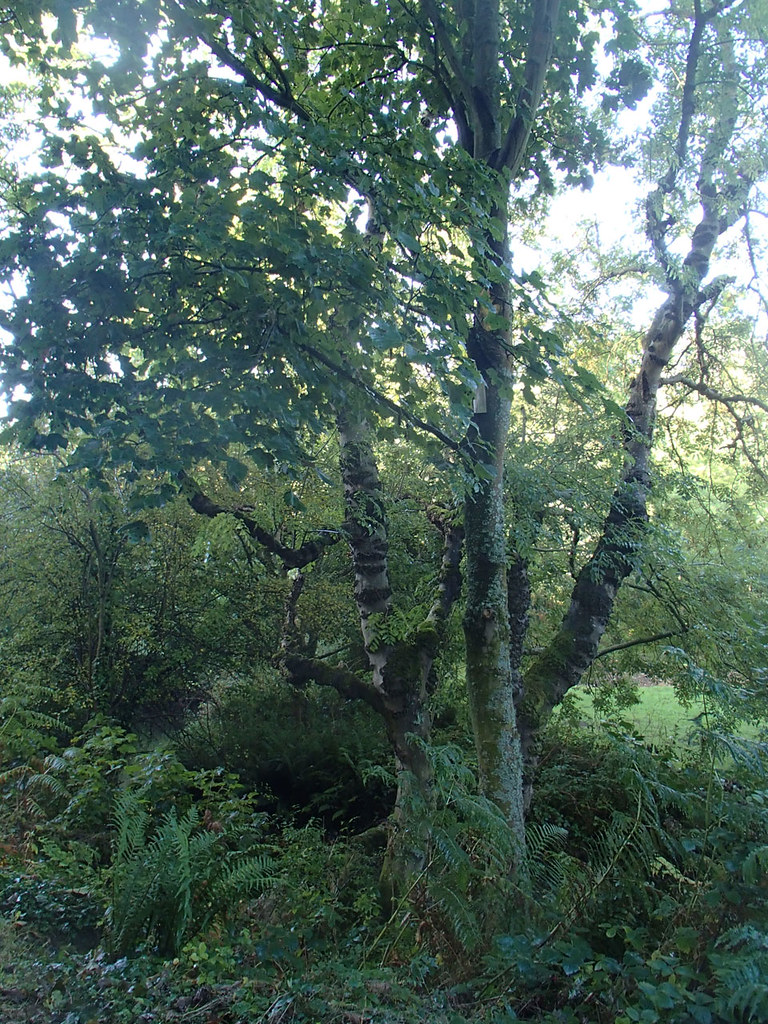 And that sycamore? The leaves were covered in unsightly black spots, which is apparently called Tar Spot, caused by a fungus, Rhytisma acerinum. Another reason to be glad I didn’t pick it… 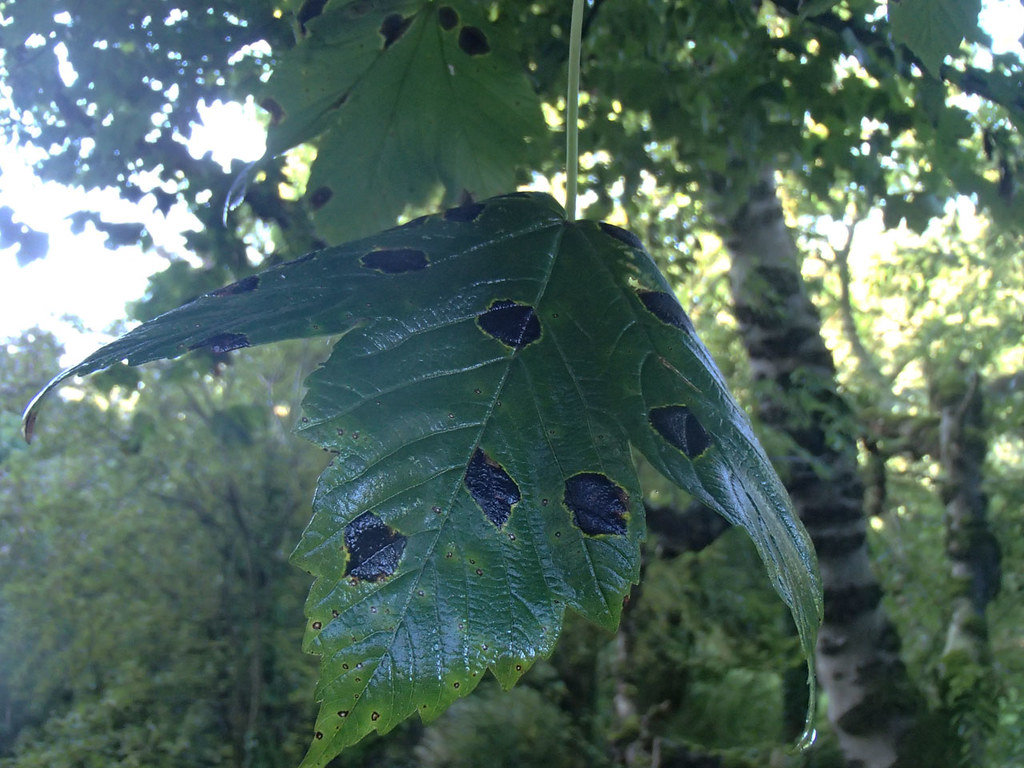 I didn’t venture down to the trunks this time, the ground was really slippery, but I was perversely pleased to see that one of the trunks has some ivy growing up it. 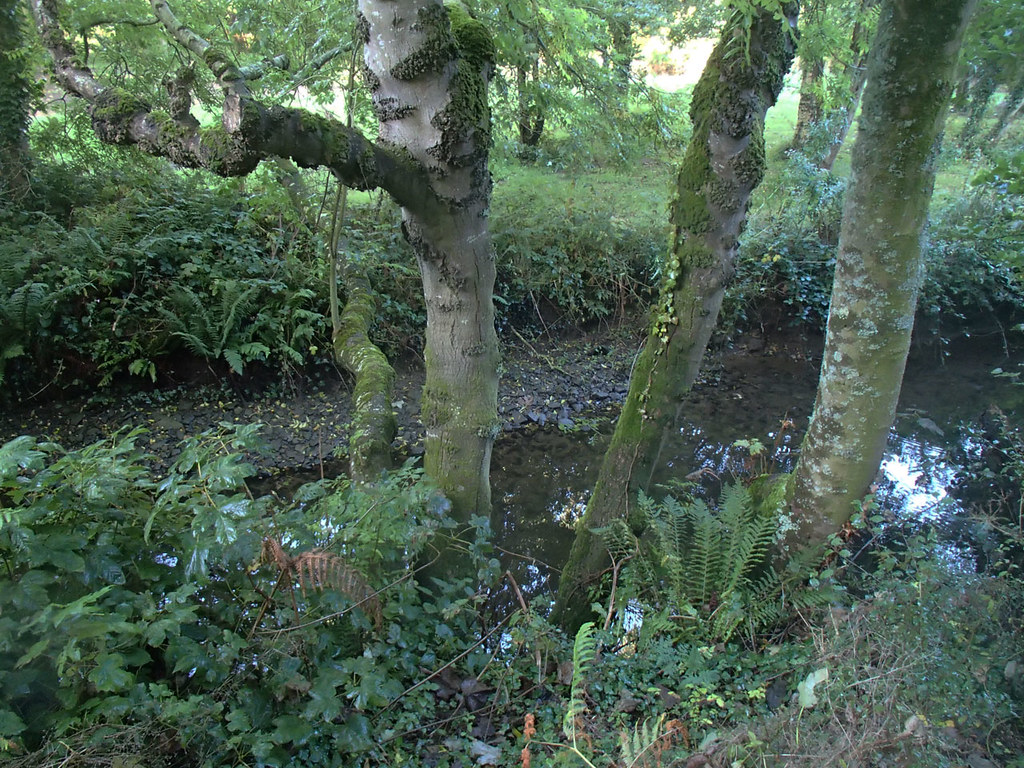 I say “perversely” because I know a lot of people believe that ivy damages trees. The RHS are pretty clear that this is not the case, ivy won’t damage a healthy tree, though it may become a problem on old or damaged trees, concealing signs of disease and perhaps helping topple it because of the extra weight. Mind you, the RHS also says that on trees with a sparse canopy, such as ash, the ivy can get enough light to develop into its arboreal form. I wonder if that will happen here.

Looking back the other way, you can see the strange scars on the trunk really clearly. You can also see how the tree stretches out across the river, which was on of the things that attracted me to it in the first place. 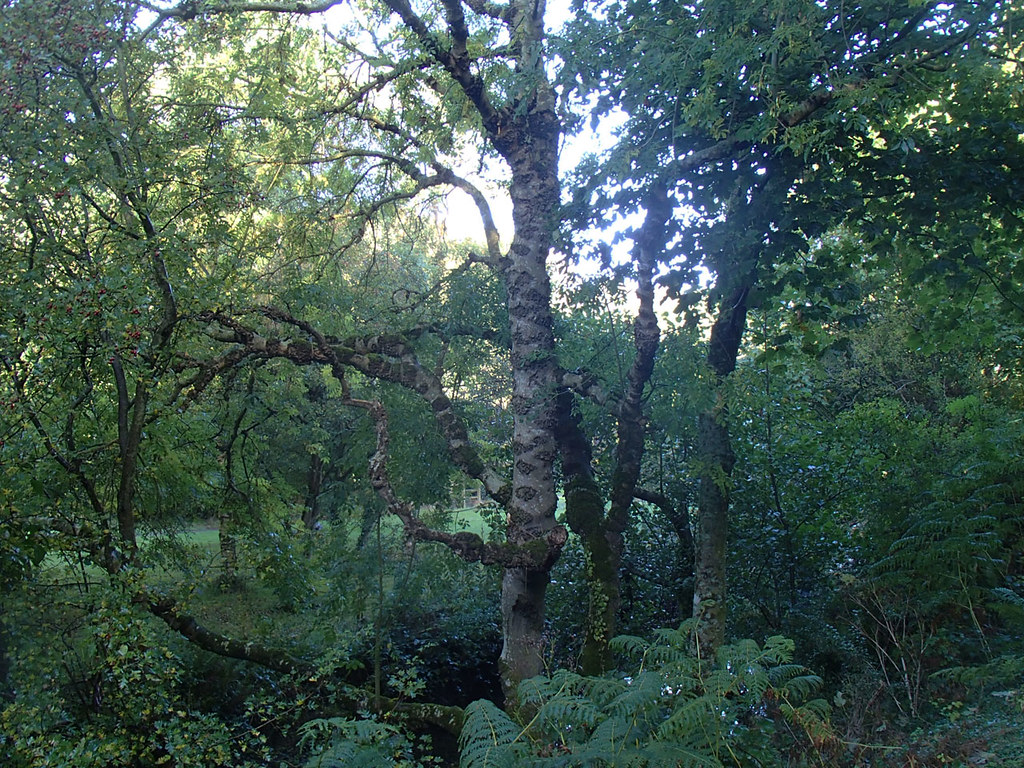 I carried on up the river to the bridge, enjoying the lichen and berries, and wondering what my tree would look like from the other side. 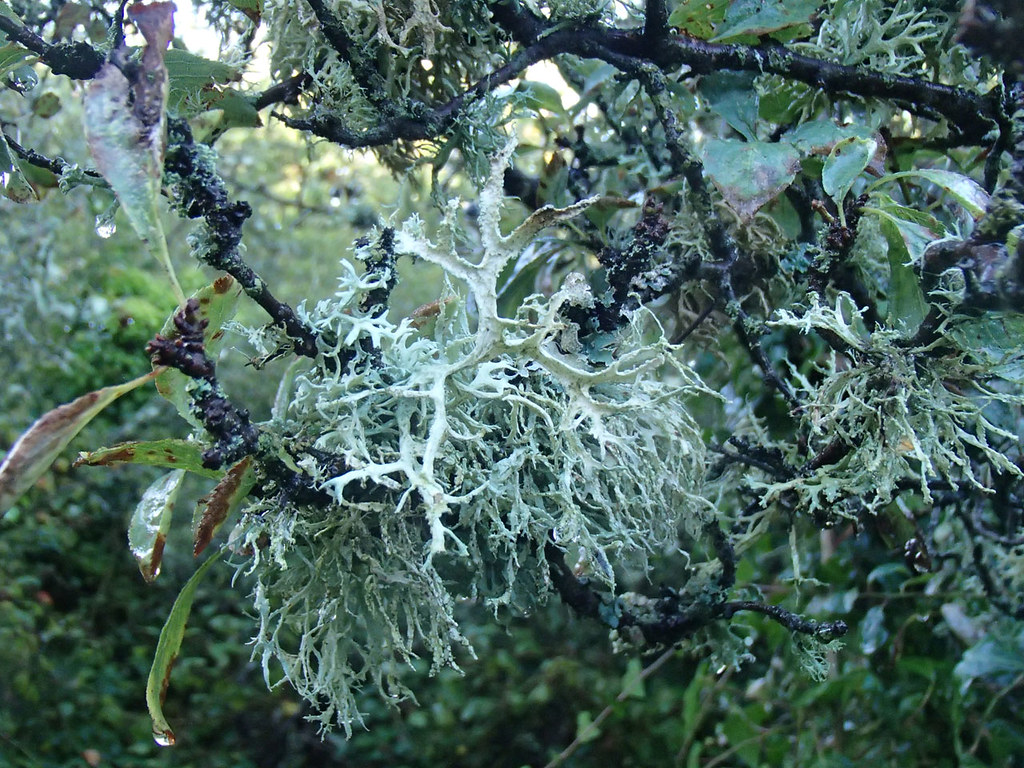 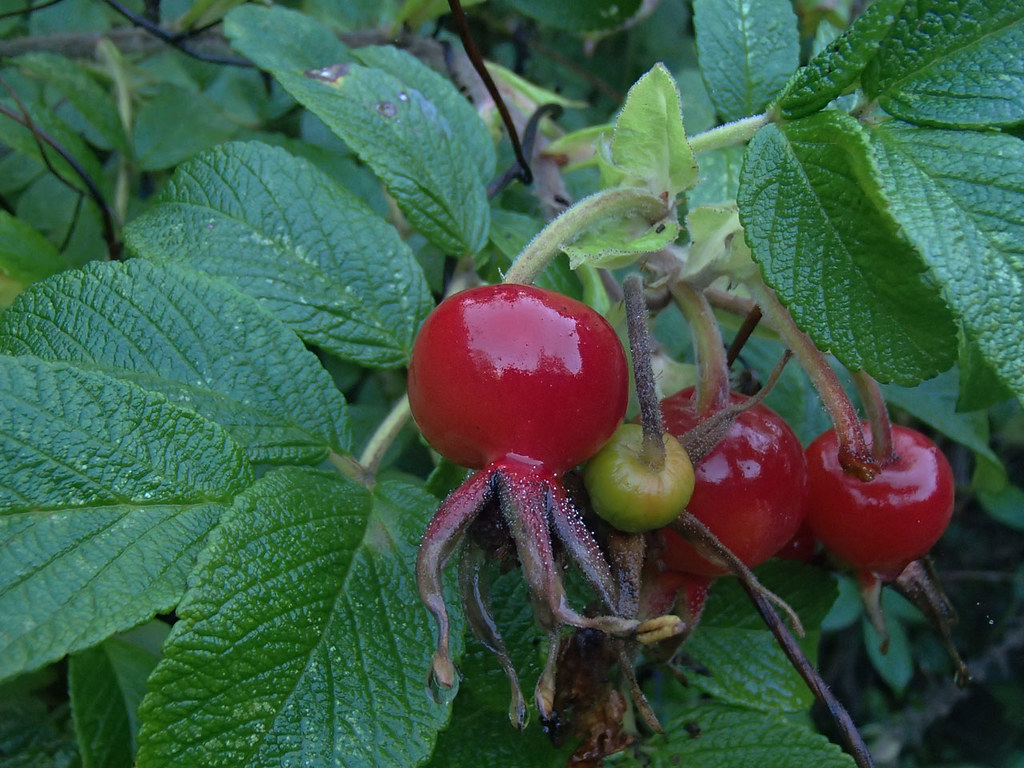 There was a bit more autumn colour on the other side of the river, though the little grove of trees planted to make a real show at this time of year were still all green. 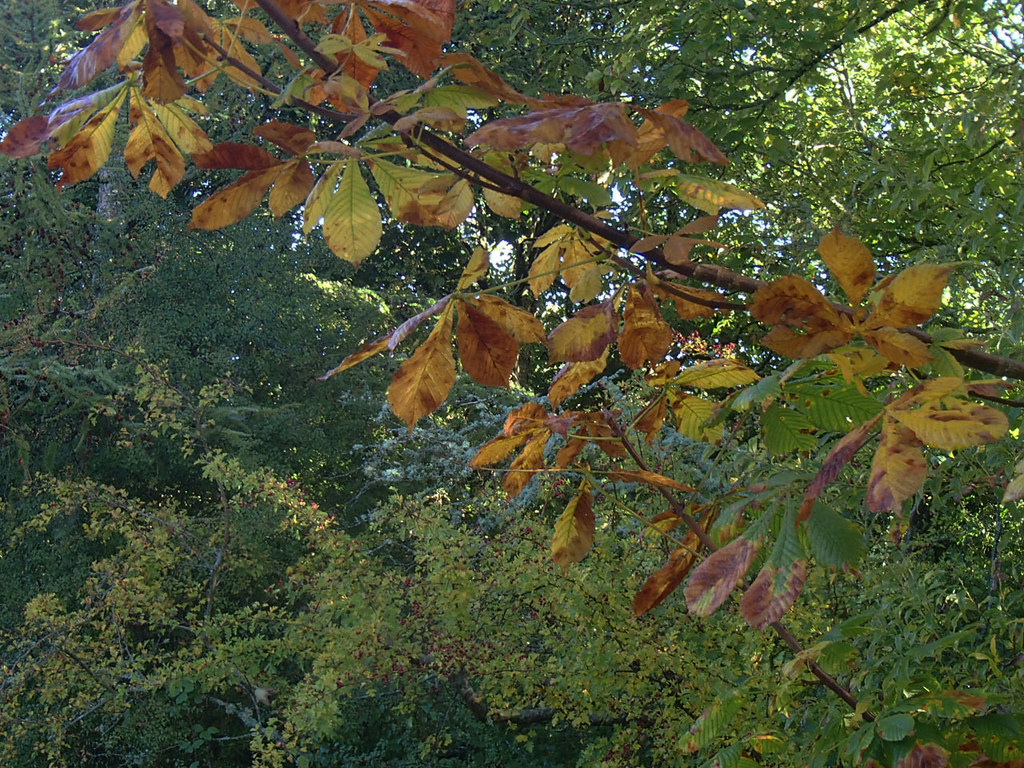 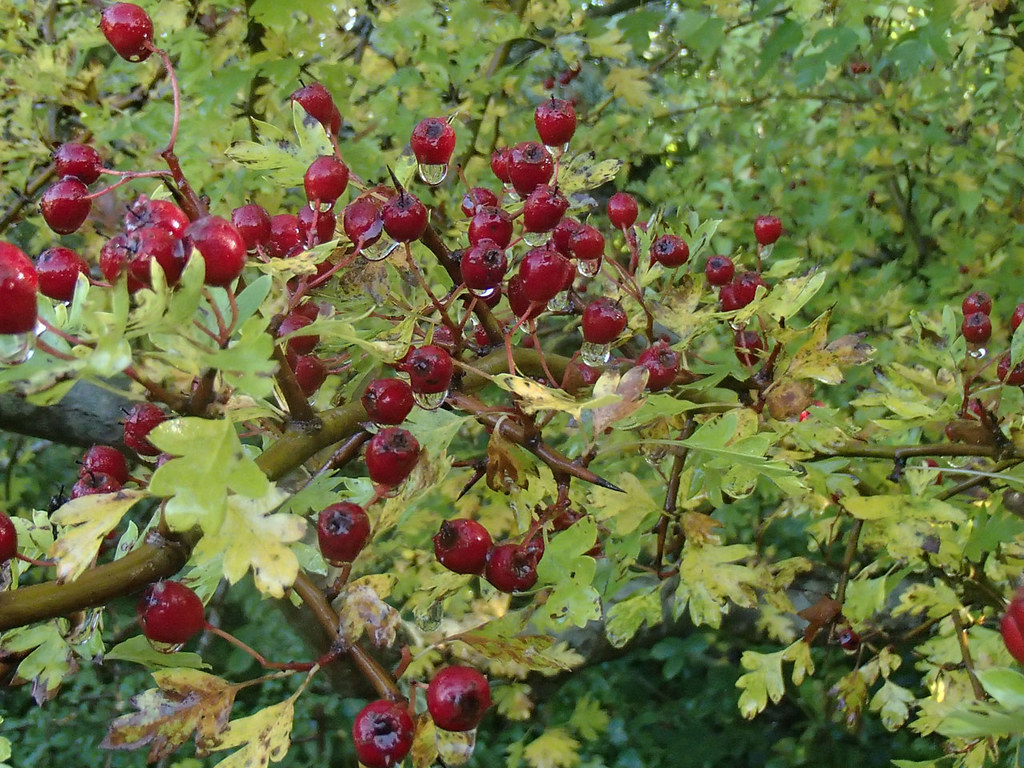 I passed one tree with an amazing collection of lichens and mosses on its trunk. 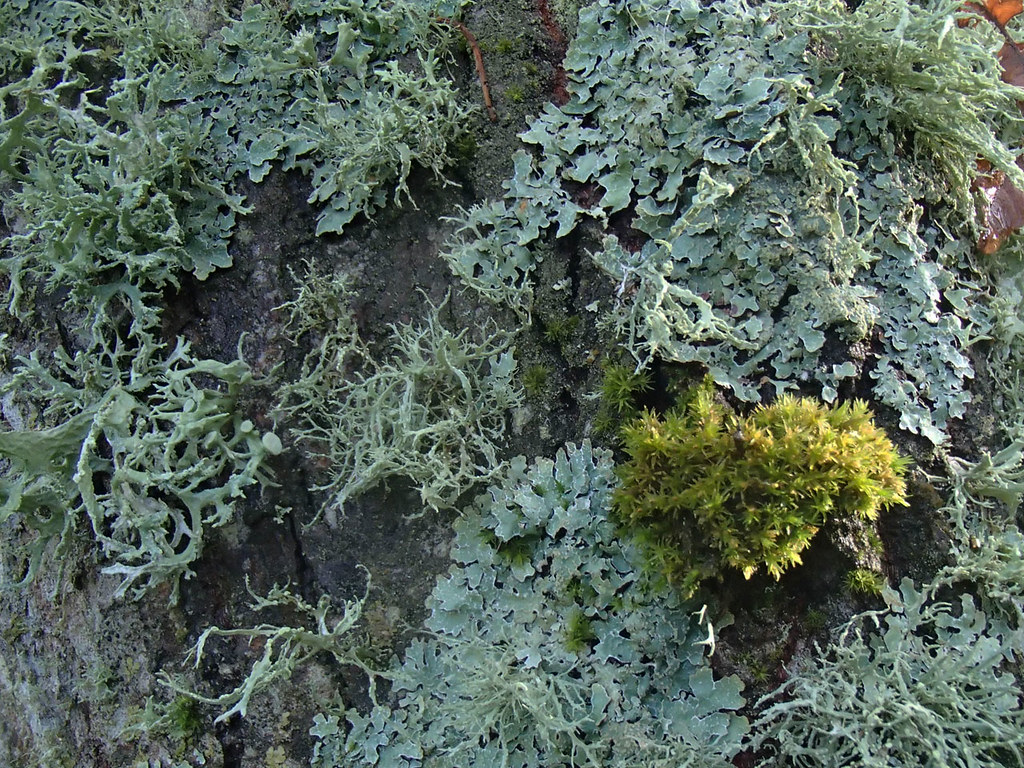 The river level was really low, we’ve not had much rain for a long time now. 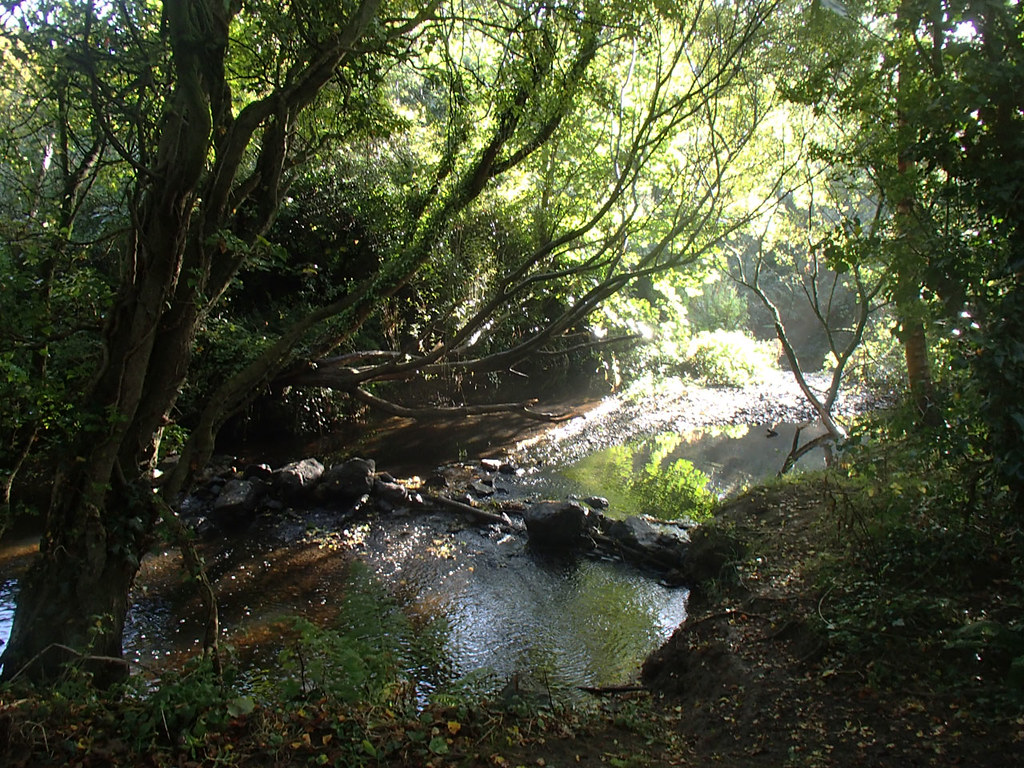 When I finally got to my tree, I was genuinely astounded. The branches that reach over the river were so densely covered in leaves that I couldn’t see the water! 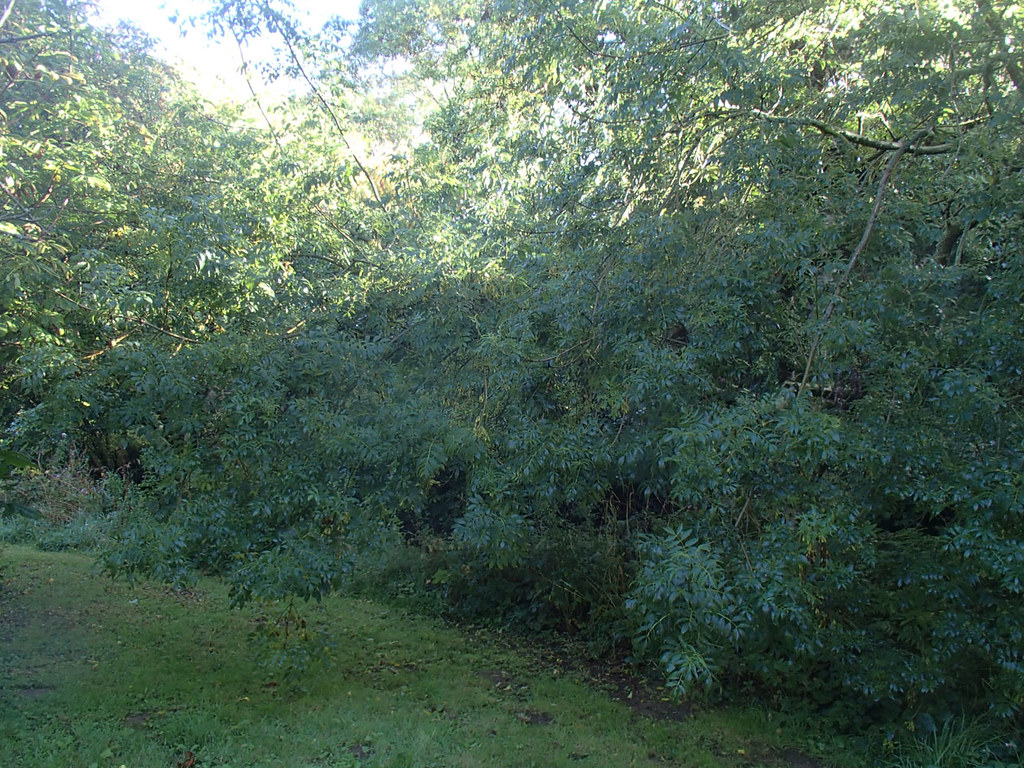 The intriguing thing was that, once I pushed through the damp branches, I could see that the leaves only really adorned the ends of them, the sections that cross the river are remarkably free of leaves, but sport some rather nice lichens. 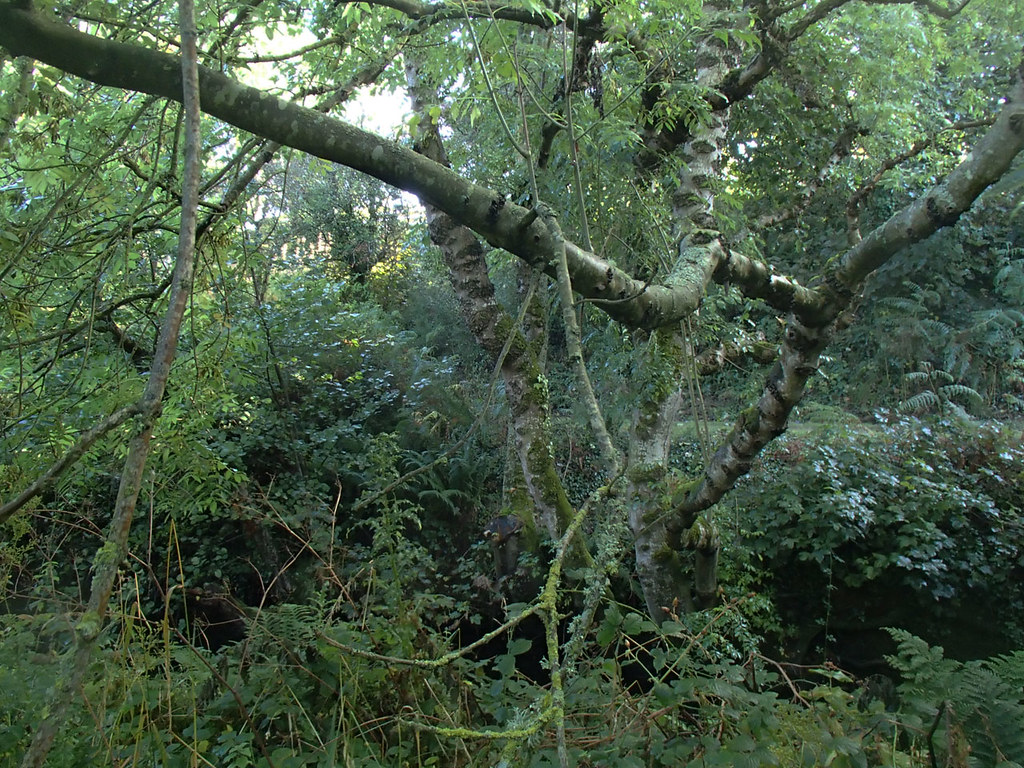 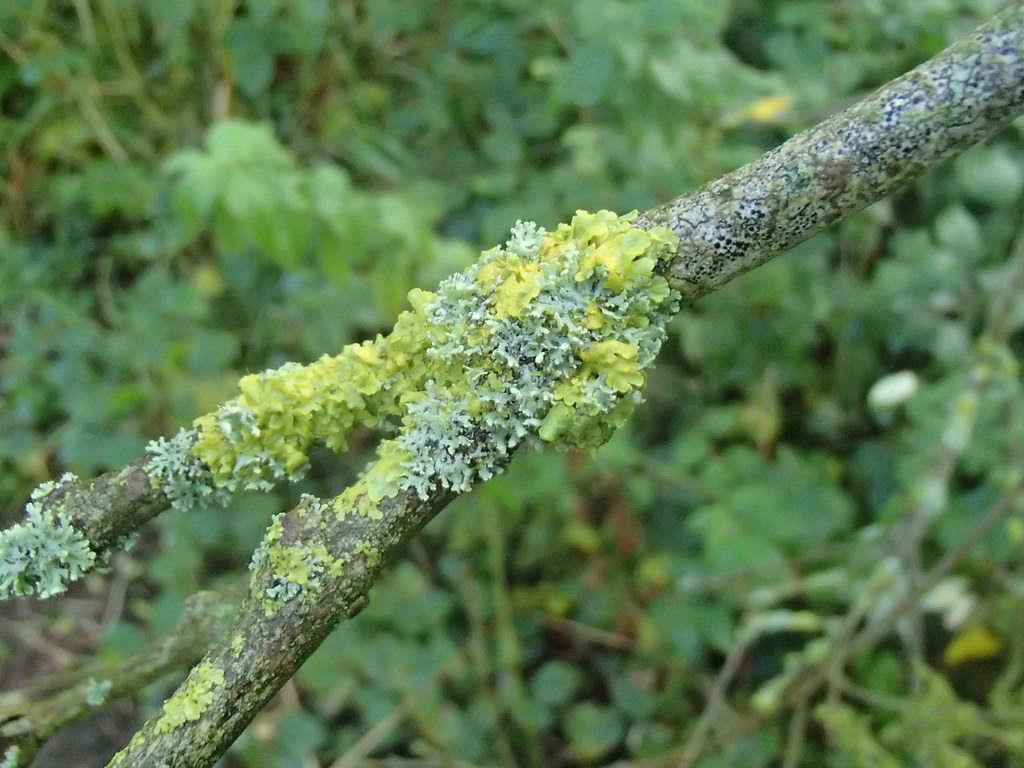 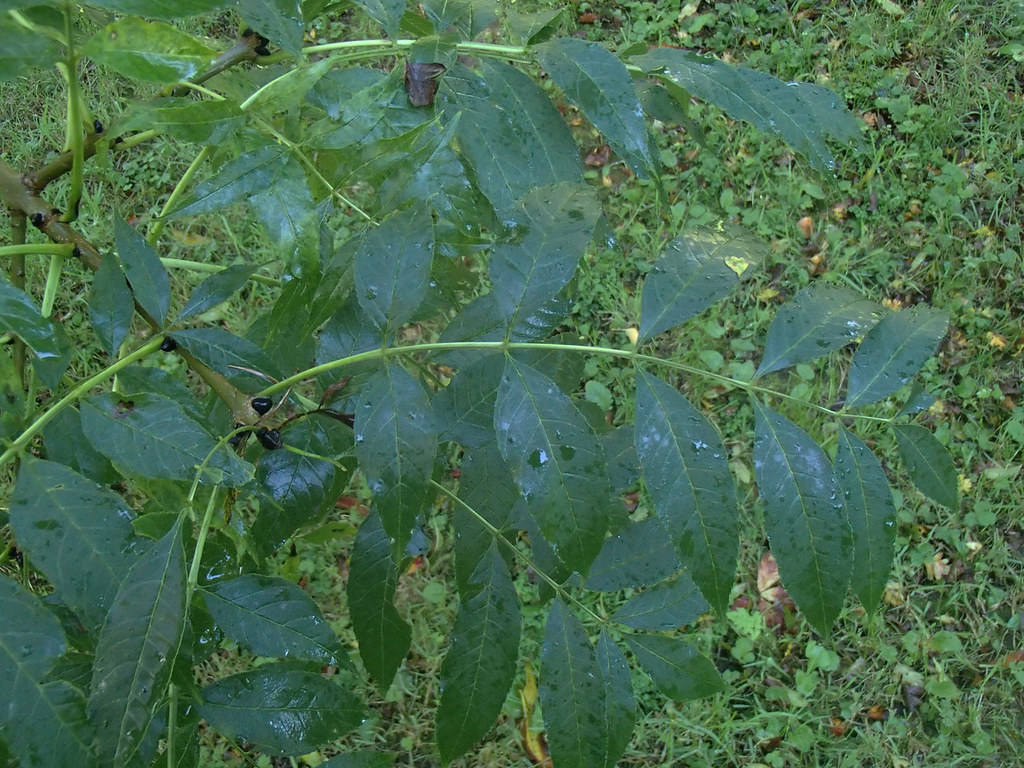 I was very restrained, and didn’t take myself off to the Heritage Centre for coffee and cake, but headed back to get on with some work, admiring the backlit nettles on my way. 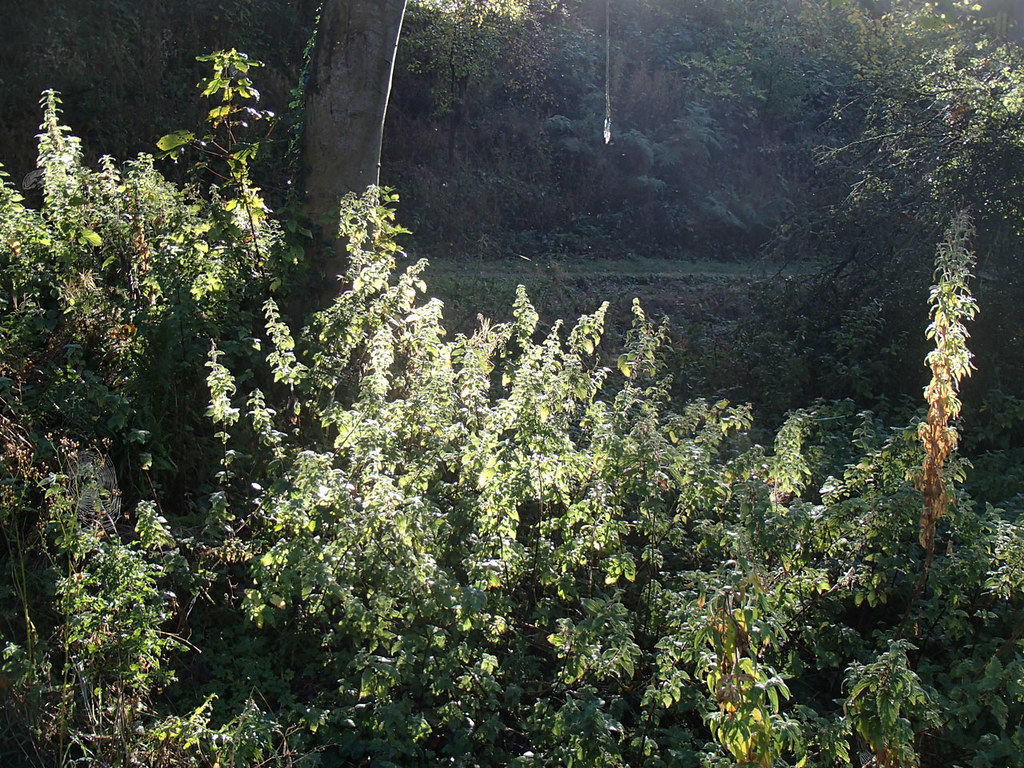 So there you have it, not an alder, an ash. My thanks to Lucy for hosting the Tree Following meme, I’m off to check up the latest posts and add my own, before Mr Linky disappears for another month without a contribution from me…