This was the first year for a long time that didn’t start with buying way too many seeds for edibles. It was also a year in which I didn’t start February by making too-early sowings of the latest tomatoes and chillies I had decided to try. Fortunately I managed to lift my head above the parapet, so to speak, for long enough to order plug plants so we have had chillies and tomatoes in the greenhouse this year. I’m going to give up on growing the larger beefsteak style toms, this year it was ‘Black Krim’, and they just always seem to turn out spongy, somewhat tasteless and far from prolific. I am quite sure this is my failing, not theirs, but what we really love is picking and eating huge quantities of cherry toms. So more of them, more of what we love, less experimenting! I begrudge the greenhouse border space. 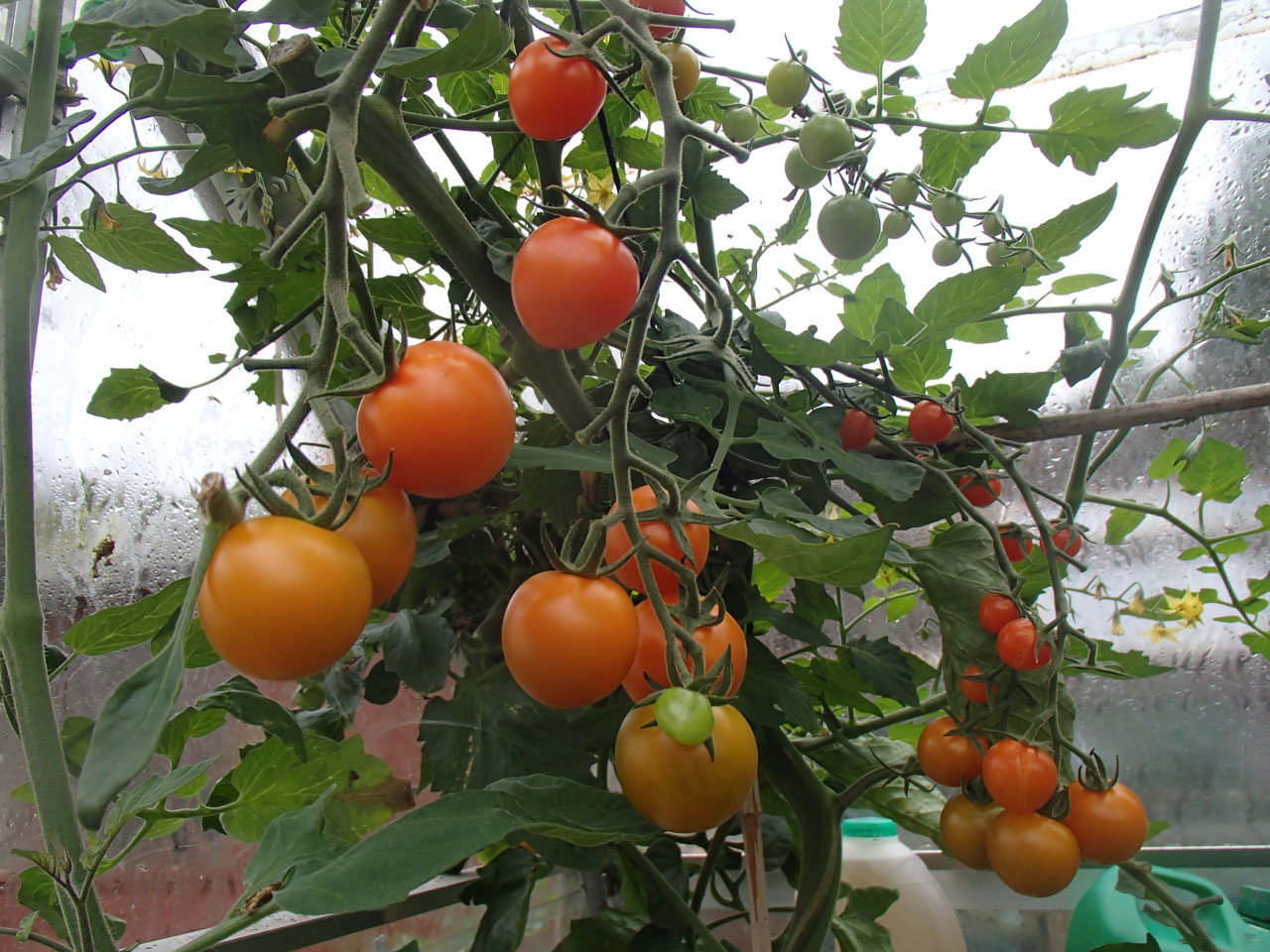 ‘Sungold’ has been its usual delicious and prolific self, and I really like ‘Blizzard’, which was new to me, and produces lots of medium size delicious rich red fruit, perfect for munching whole or slicing in a sandwich. I will hopefully grow both again next year. 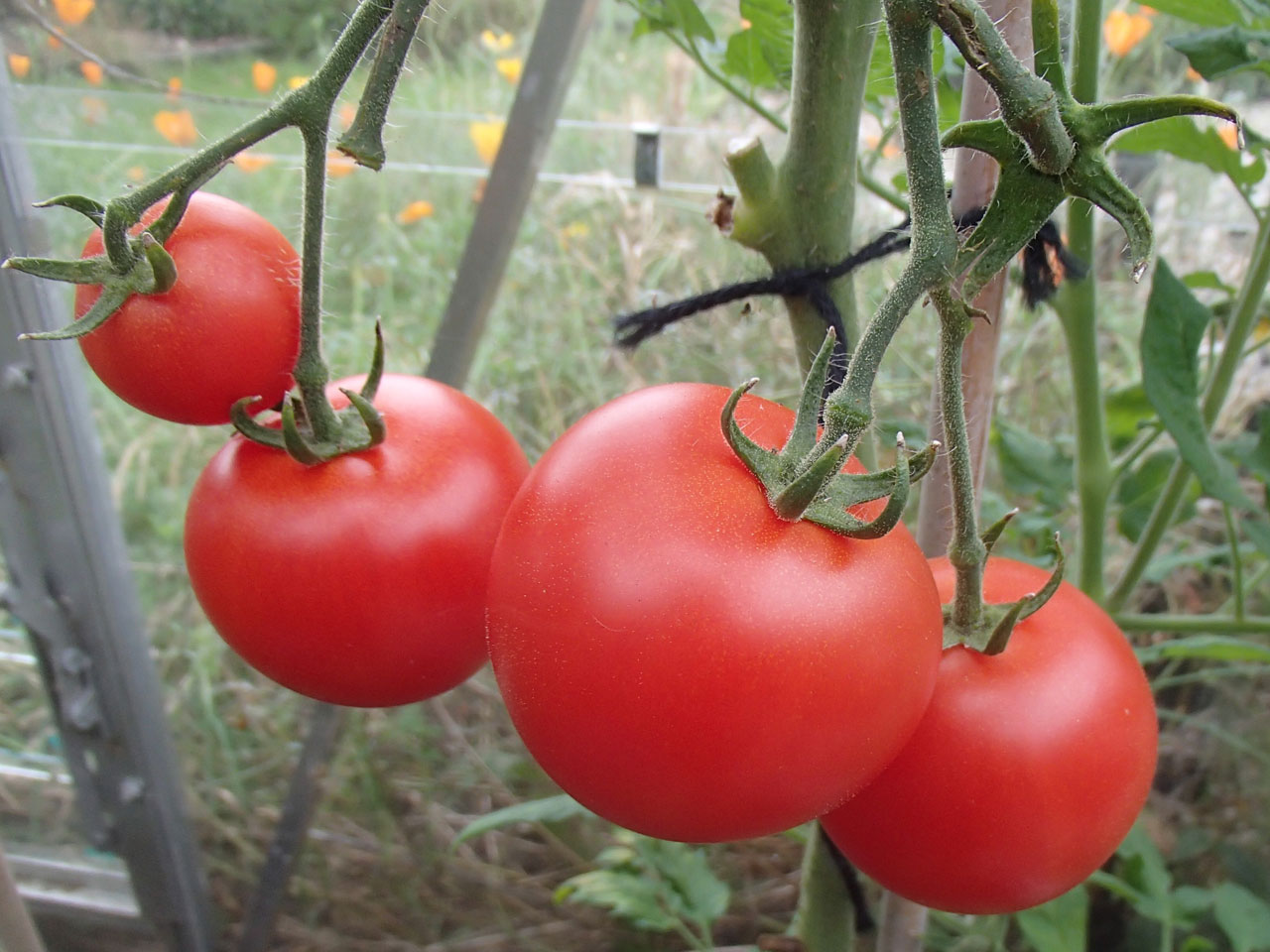 I only grew three chilli plants this year. The mild and apparently very stuffable ‘Hungarian Hot Wax’, which has only formed a dwarf plant and a grand total of three fruits. The largest of these has ripened, so I will be trying it this week. Can’t say I am feeling over excited about it, but I will be trying to over winter the plant in the hopes that I get more out of next year. 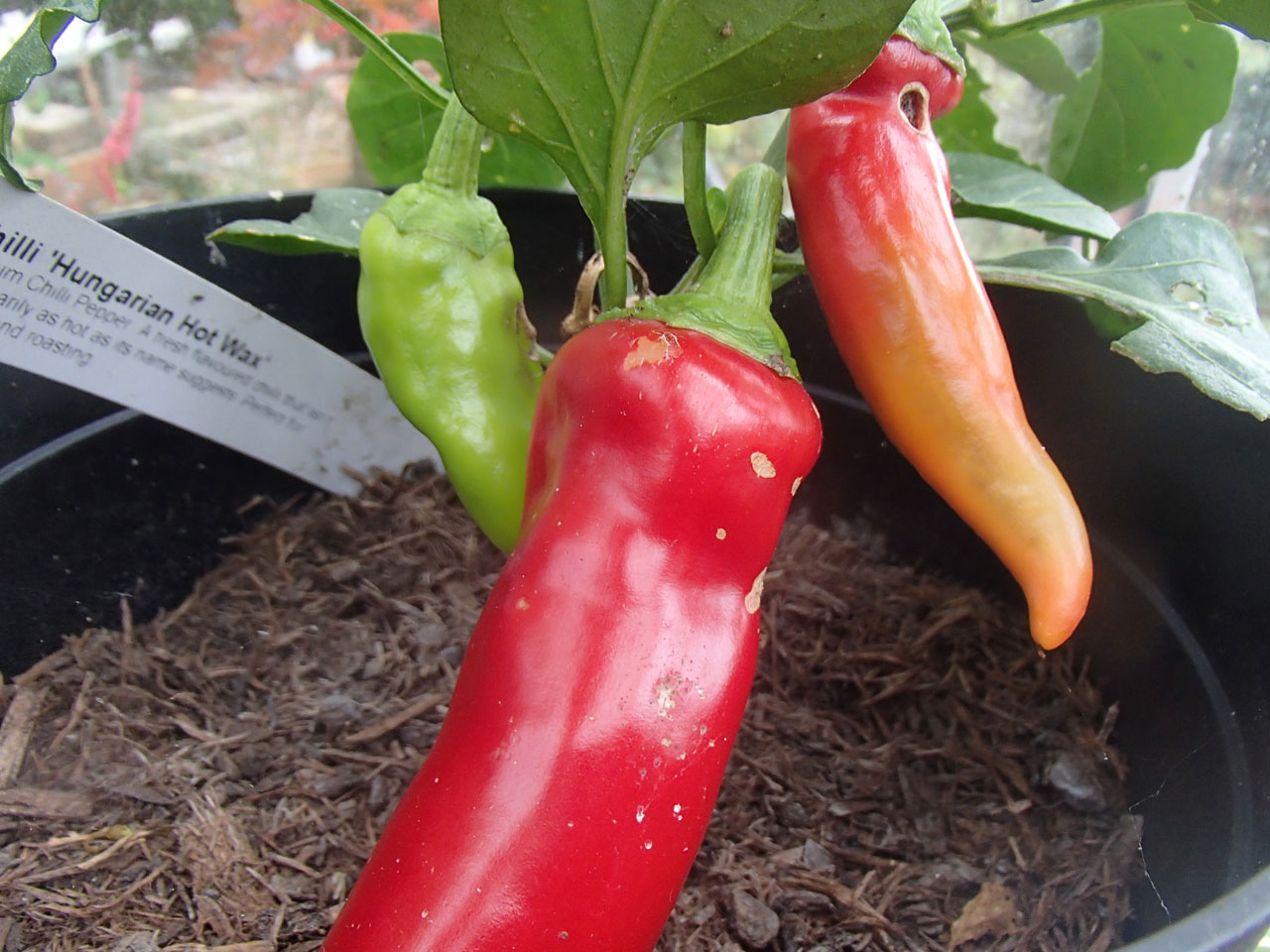 Chilli number two was a medium hot type called ‘Joe’s Long Cayenne’. Much more prolific than ‘Hungarian Hot Wax’, with lots of quite mild very long fruit. They are taking a while to ripen, but I am enjoying them – again, I will try over wintering the plant. 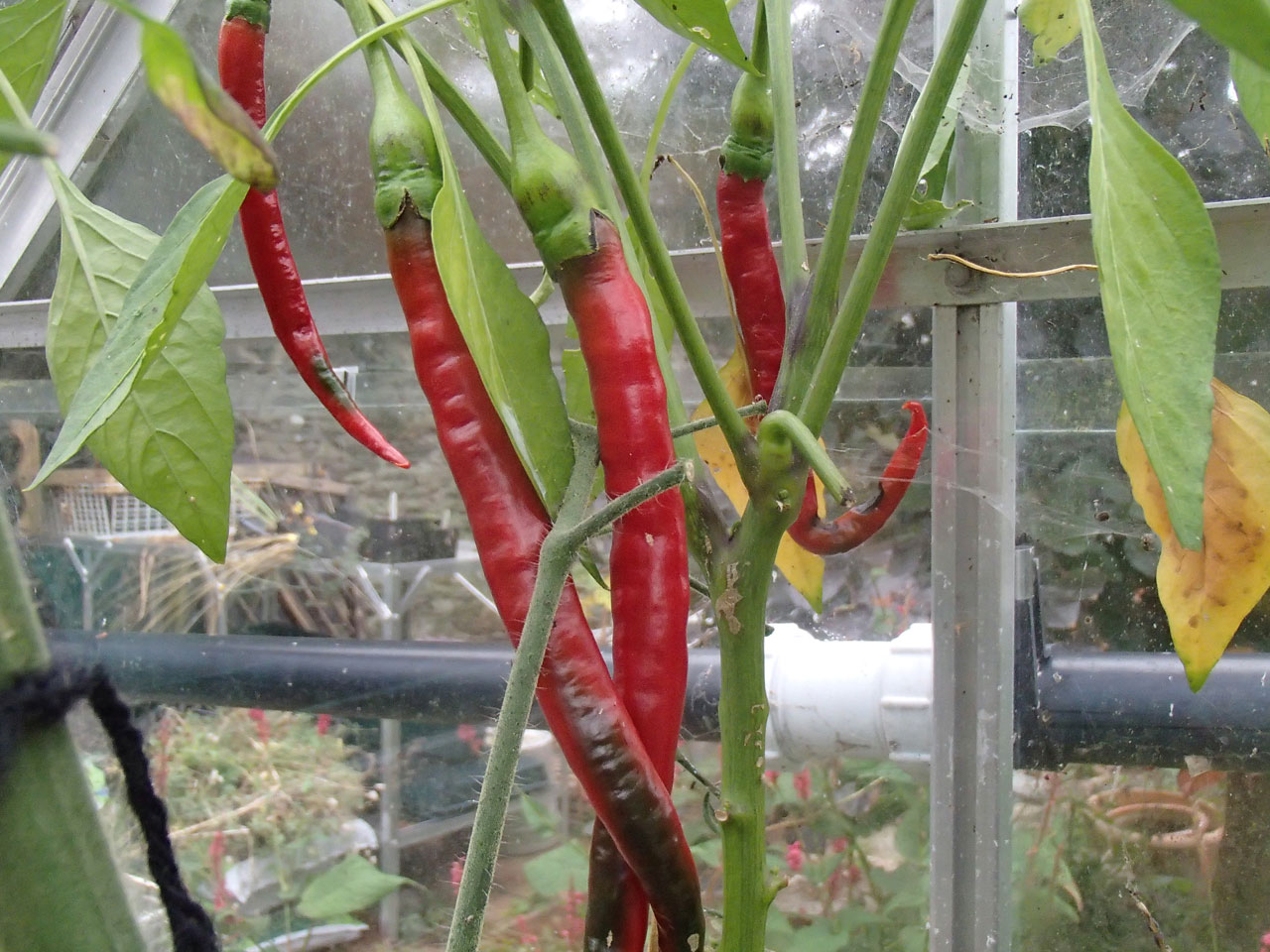 Chilli number three was the most prolific, and the one I have used the most too, as it is quite hot – ‘Ring Of Fire’. Sounds more combustable than I have found mine to be, but a perfectly adequate substitute for Bird’s Eye chillies in the various Thai and Vietnamese dishes we so enjoy. Definitely hoping this over winters, as I could get a bumper crop next year. 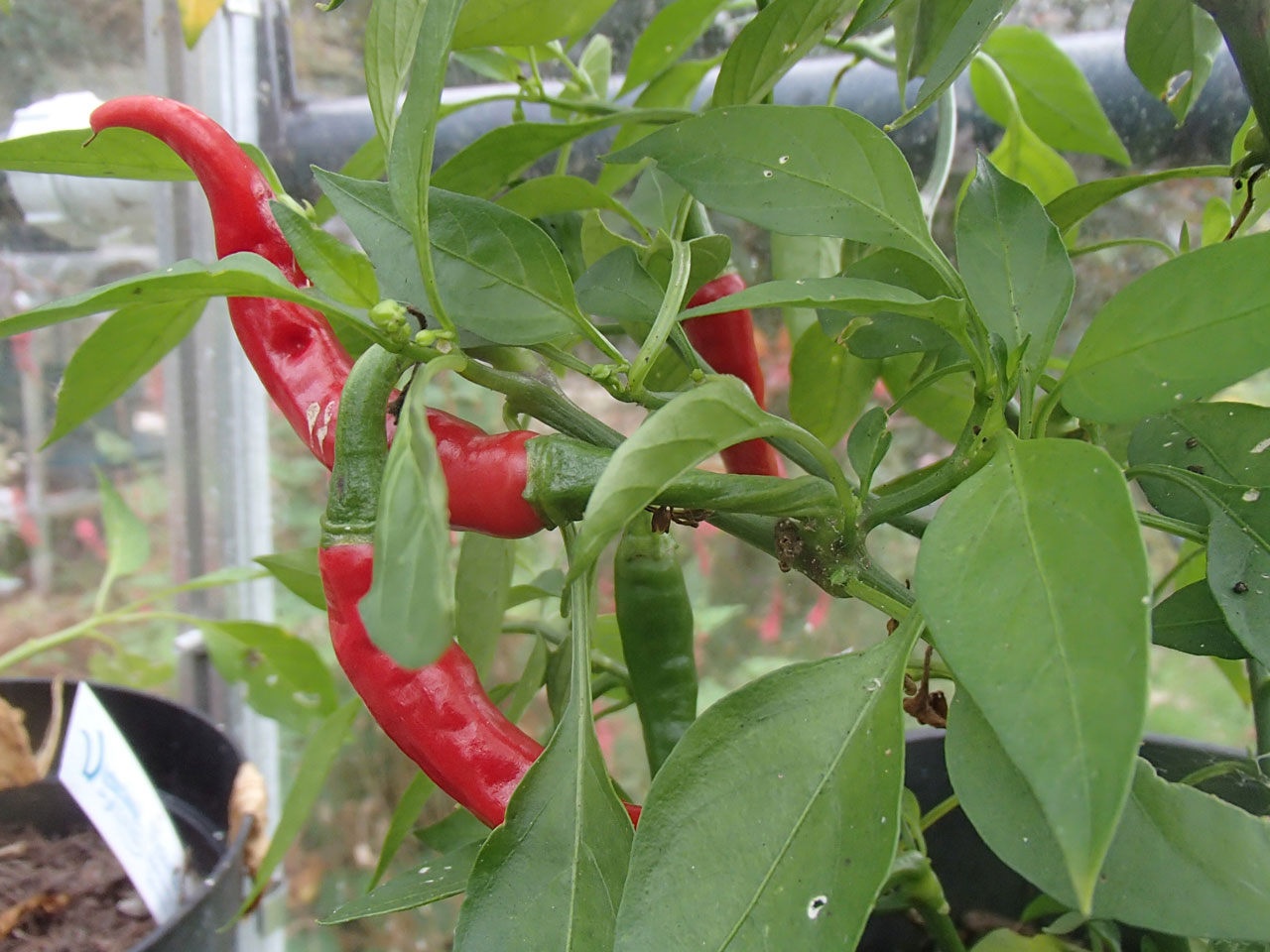 I am now in the usual state of waiting to cut down the tomato plants, torn between making space for the salad and oriental leaves I have sown in modules for over wintering, and picking tomatoes for as long as possible… 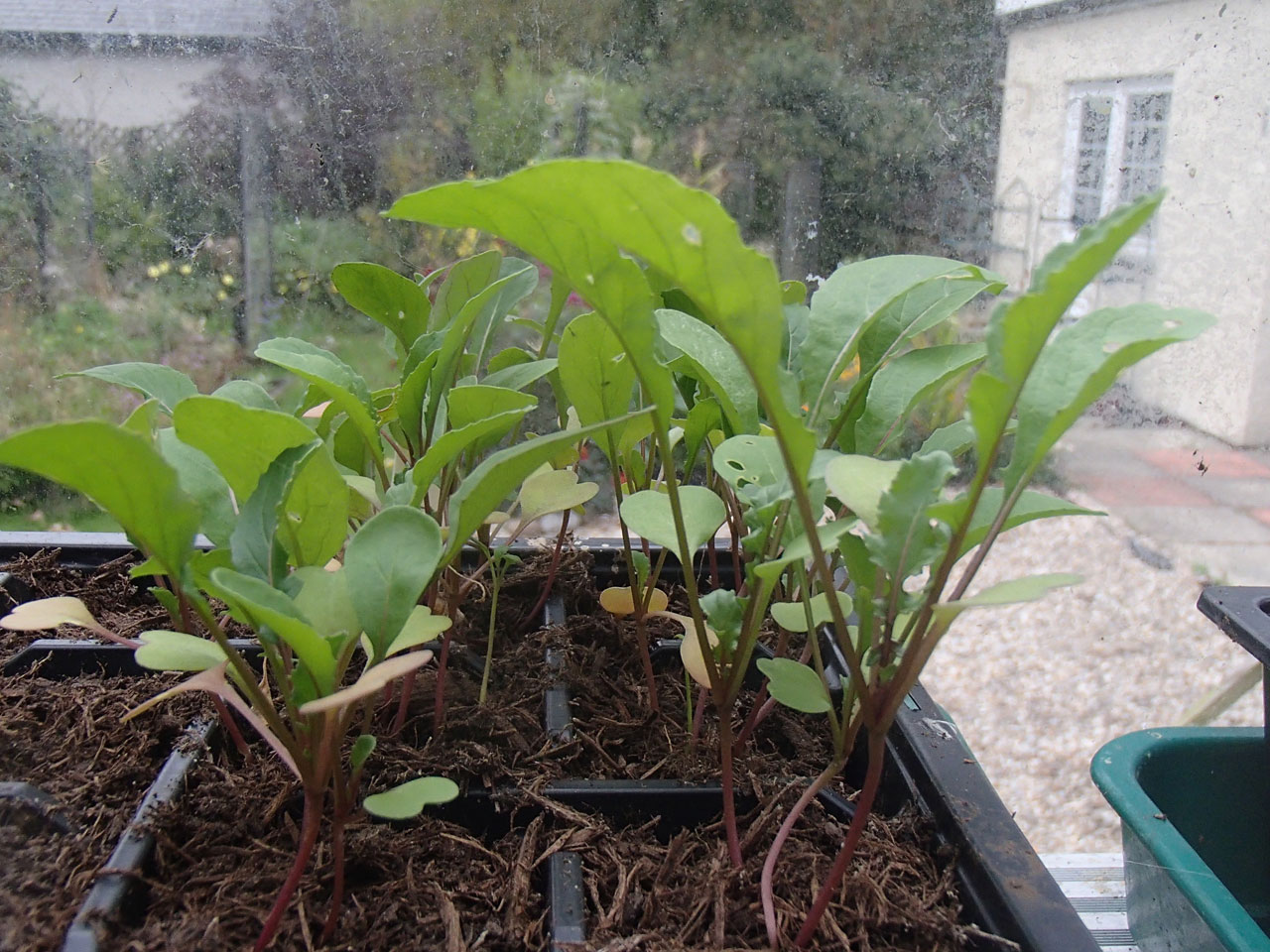 Outside the story has been more hit and miss. The potatoes (‘Cheri’ first earlies) were delicious but I didn’t do a good enough job of earthing them up, so I lost almost a third to going green. On the other hand, I seem to have (mostly) got rid of the Jerusalem Artichokes, and the Oka have been growing really well. Only a few flowers, but I love the way the foliage smothers all weeds, and the tubers, I know from last year, are delicious roasted with a little olive oil. One to harvest in the winter months. 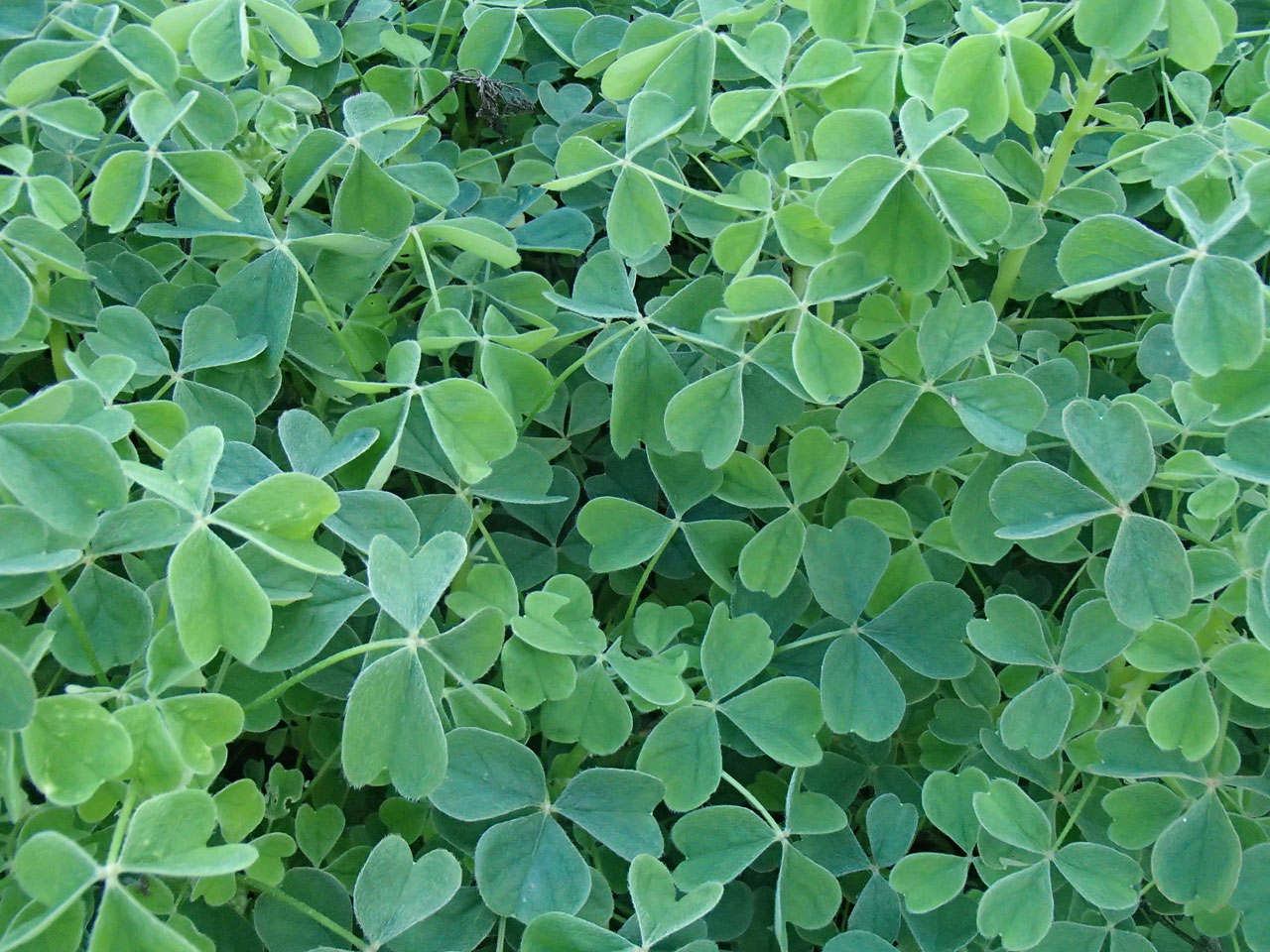 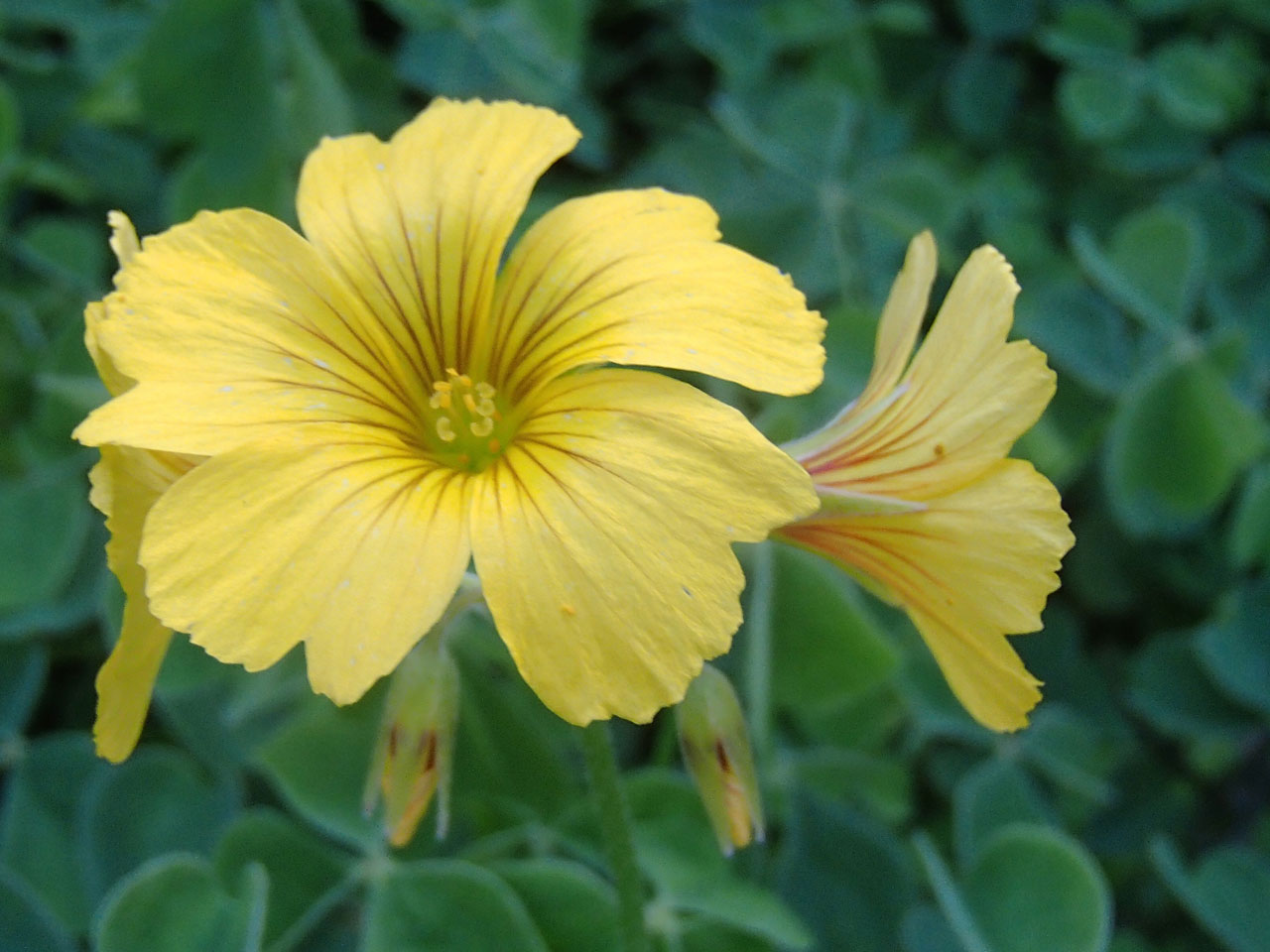 Sweetcorn was a bust. I ordered ‘Golden Bantum’ from Otter Farm. The seed packet was supposed to contain between 12 and 15 seeds, so I was confident of getting a block of twelve plants. Instead, I discovered only 10 seeds, and only 8 germinated. And then the whole crop pretty much failed. That, I am quite sure, was my fault for not watering them enough – and for planting them out late – but I will be reverting to cheaper varieties next year.

I failed to sow beetroot, and missed it terribly, ate plenty of lettuce and various oriental leaves at points but also had huge gaps of nothing to pick at all because I was so haphazard about sowing, so I am very happy that the legumes did well again this year or it would have felt like a massive failure! 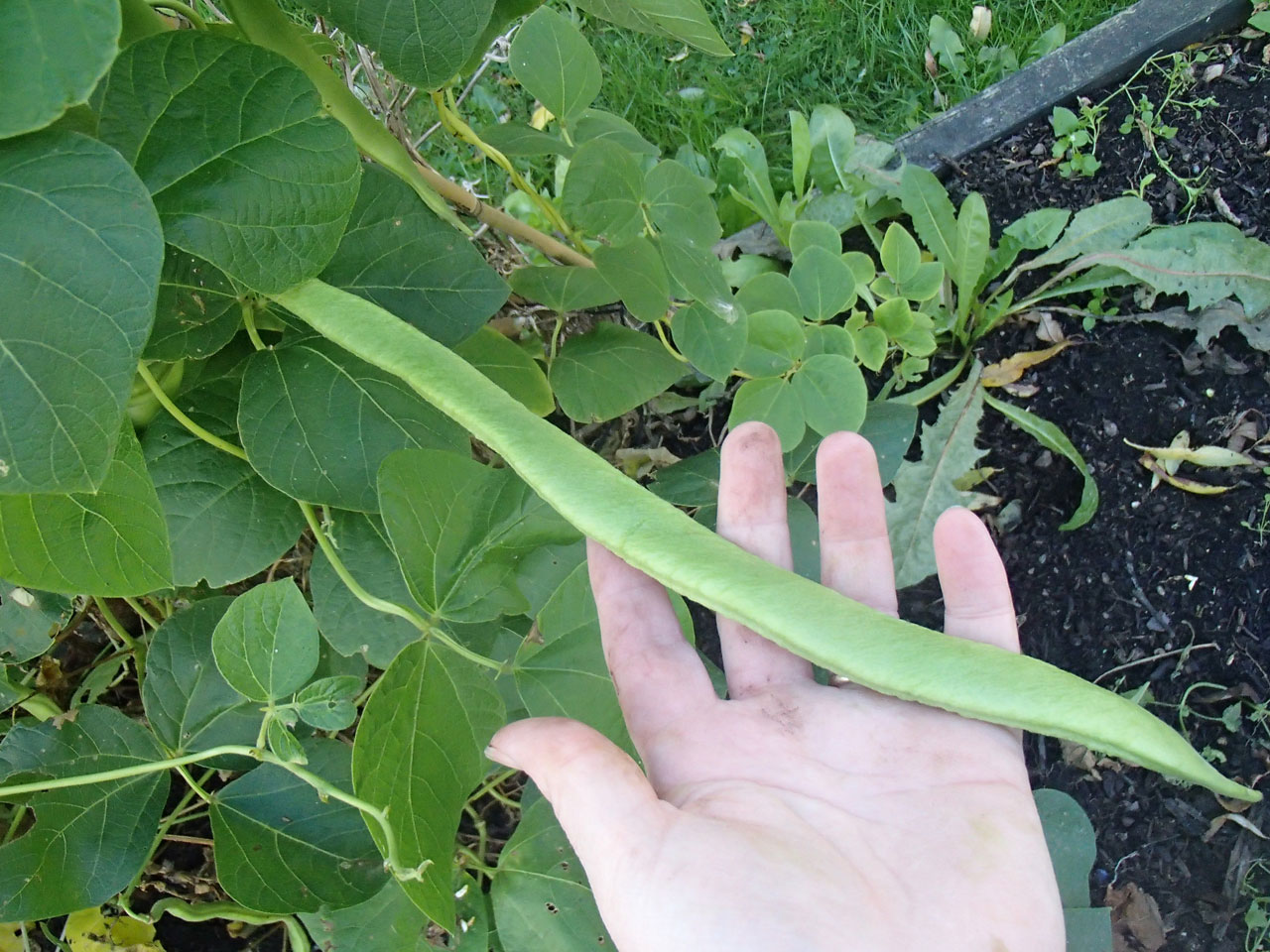 We were eating broad beans and peas throughout the summer, and from August onwards plenty of French and Runner beans. The runner bean ‘White Lady’ is still cropping, and I only managed to direct sow about 4 plants, as that was all the seed I had left. Likewise on the French bean front I just sowed what I had left, directly in the soil (I usually use root trainers) and got a mix of ‘Cherokee Trail of Tears’ and a purple French climber whose name I forget. Next Spring I will be stocking up on pea and bean seed, I’d love to hear what you recommend. I know I will grow ‘Stereo’ broad beans again, I love the white flowers, likewise ‘Trail of Tears’ and ‘White Lady’, but I would welcome suggestions of what peas other than ‘Onward’ to try, and if you know of a good sugarsnap, I’d love to know about it. 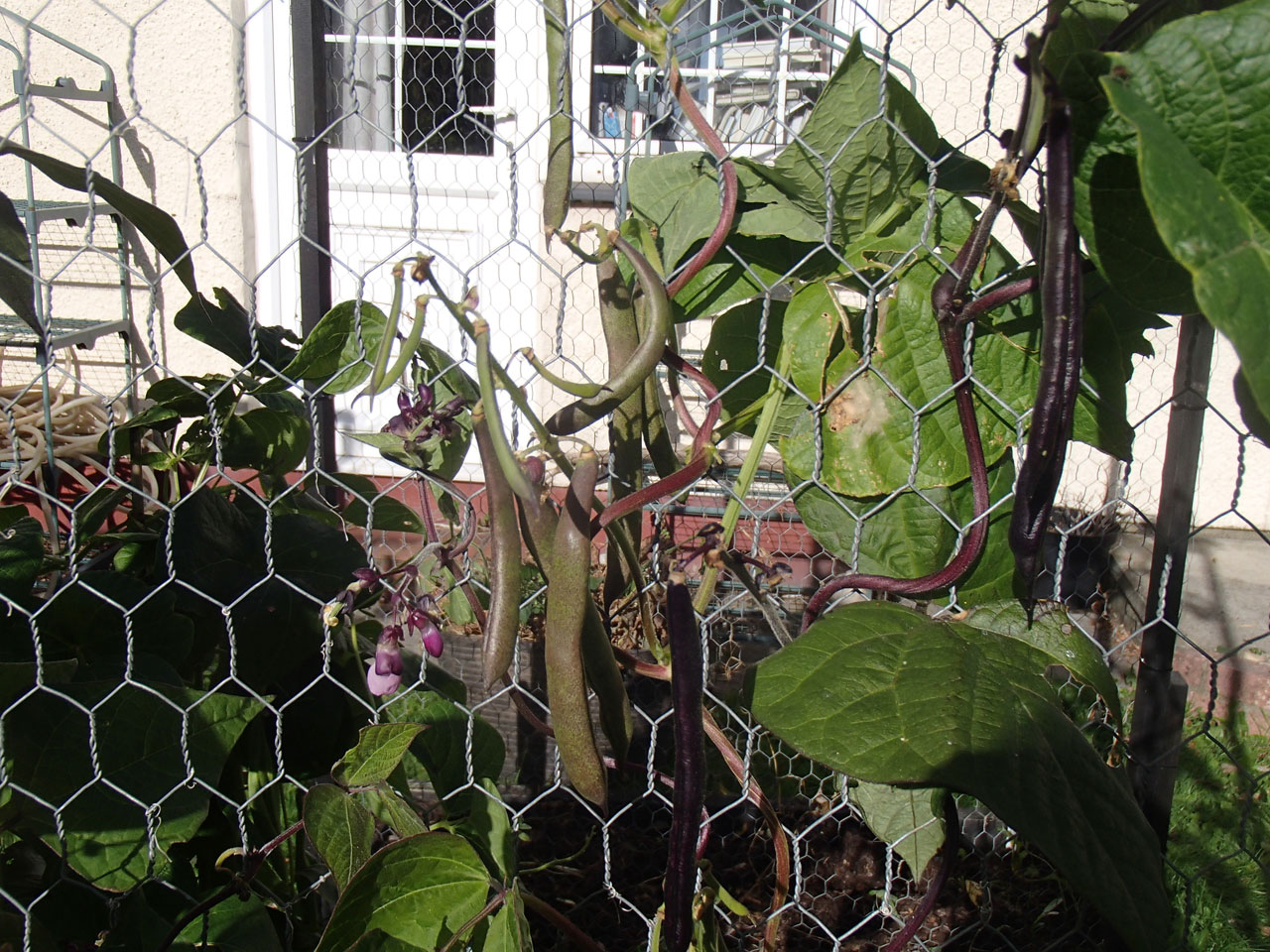 Everything is winding down for the year now, I have a row of Chines Kale and another of red kale ‘Rouge de Russie’ to thin out, and the garlic chives are flowering (thank you Kate!), but really I need to get clearing the other beds and mulching with seaweed ready for the winter. No purple sprouting broccoli this year, I just wasn’t organised enough, and the plug plants never seem to settle in well for me. Overall, not the total dearth of edibles I was fearing given how busy I have been with work, but I really hope to do more next year. 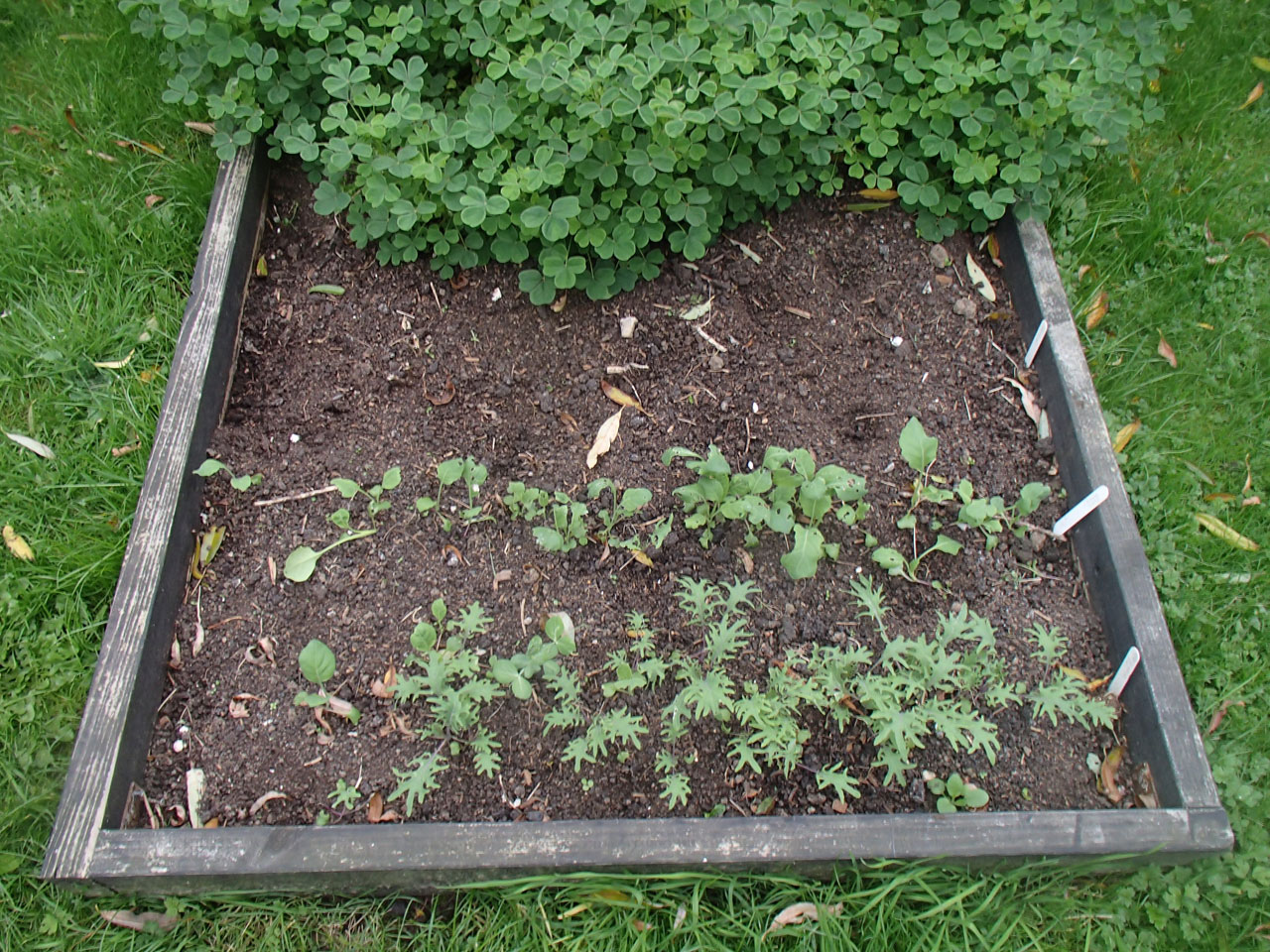 You will probably see that I am playing with a different blog theme – I say ‘probably’ because I am still developing it, and keep changing my mind about various things, and may occasionally need to swap back to the old one if I break it… I have been wanting to put together a mobile-friendly blog theme for myself for a while now, one with a simple layout which allows me to use large photos without also having to have wide text columns. I hate it when text gets so wide it is hard to read. I’ve tried to make it faster to load too, particularly on phones and tablets. If you find anything annoying, or just plain broken, do please let me know! I hope to be adding bits and pieces to it over time, to make it more useful to me. I really want a nice way of adding plant profiles and associating them with borders in the garden.

Finally, some of you have asked what the new business is – no great mystery, we’ve set up a web design company, which I am slowly trying to grow. Its called ‘Mônality’, a play on ‘Ynys Môn’, which is the Welsh name for Anglesey, where we live. We hope to specialize in working with small businesses and individuals. 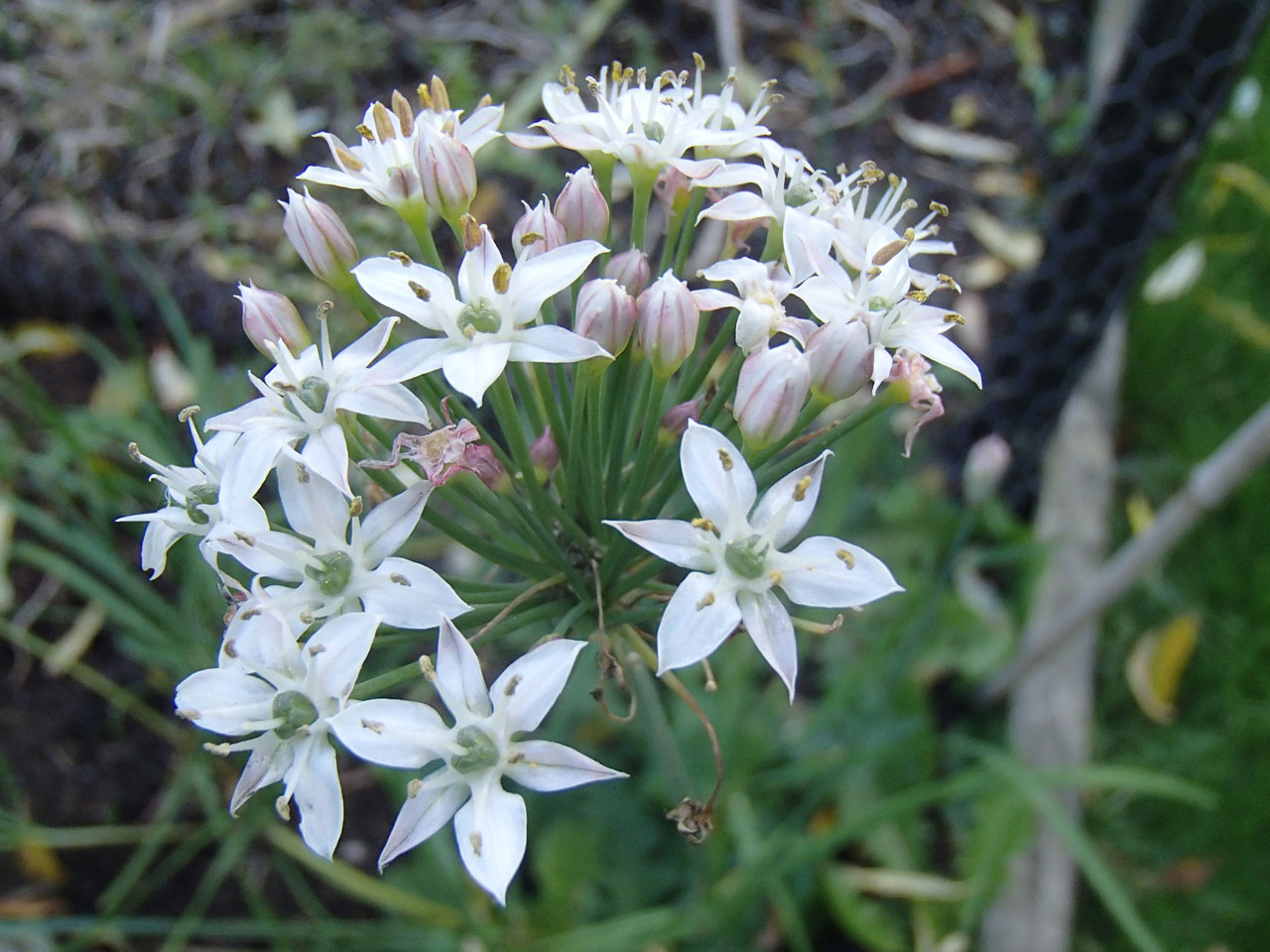