I mentioned at the end of my post on Plas Cadnant that I wanted to re-work what I call my Problem Corner in the front garden, paying particular attention to the foliage. It is a mostly shady corner of well drained good quality soil – apart from one area where it is still full of old gravel – and is exposed to the northerly winds in the winter. Large portions of it had been completely taken over by ‘Mind your own business’ (Soleirolia soleirolii), which the RHS describes as “…a fast-growing, mat-forming perennial with creeping, rooting stems…”. Yes, creeping. Worse than the buttercups that also infest that area. I can’t quite believe that this plant is sold, in pots, in reputable Garden Centres! It’s a thug! Yes, it can look quite pretty filling the gaps between slabs, or on steps. But take your eye off it for a couple of weeks and it gets everywhere! 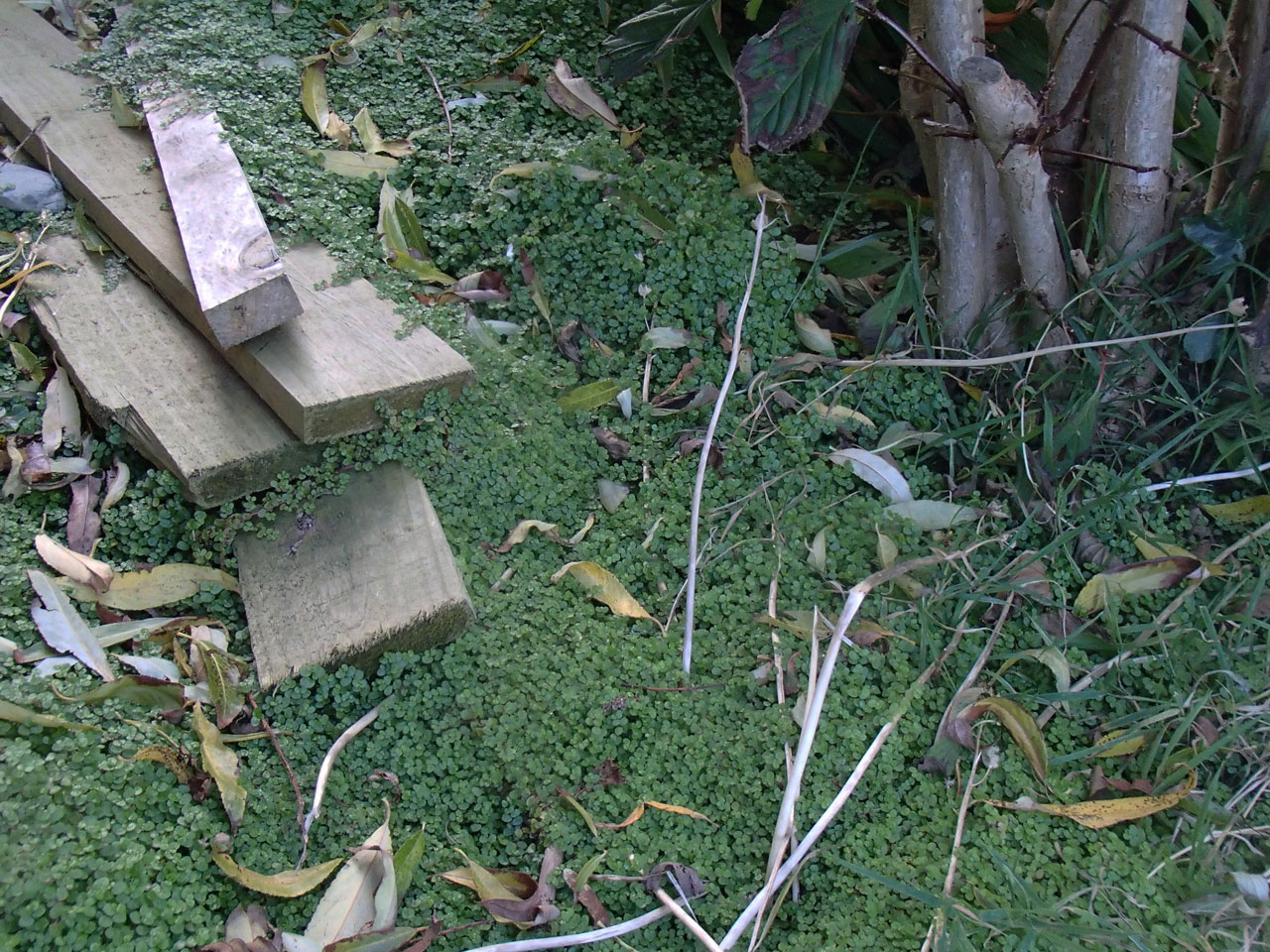 There’s a viburnum somewhere in there…

Anyway, I dug out loads of buttercup, grass and MYOB, got rid of the struggling hosta, and spent a lot of time staring at the area, plotting and planning. Even in winter, the sun cuts through the middle of this bed in mid to late afternoon, and I had already planted an Amelanchier there to catch the light. I decided to move the Cornus ‘Midwinter Fire’ that had been languishing in the back border, hidden by the raspberry canes, and plant in where it too would catch that sun. You can just about see it, surrounded by lovely dark mulch, in the center of the photo below: 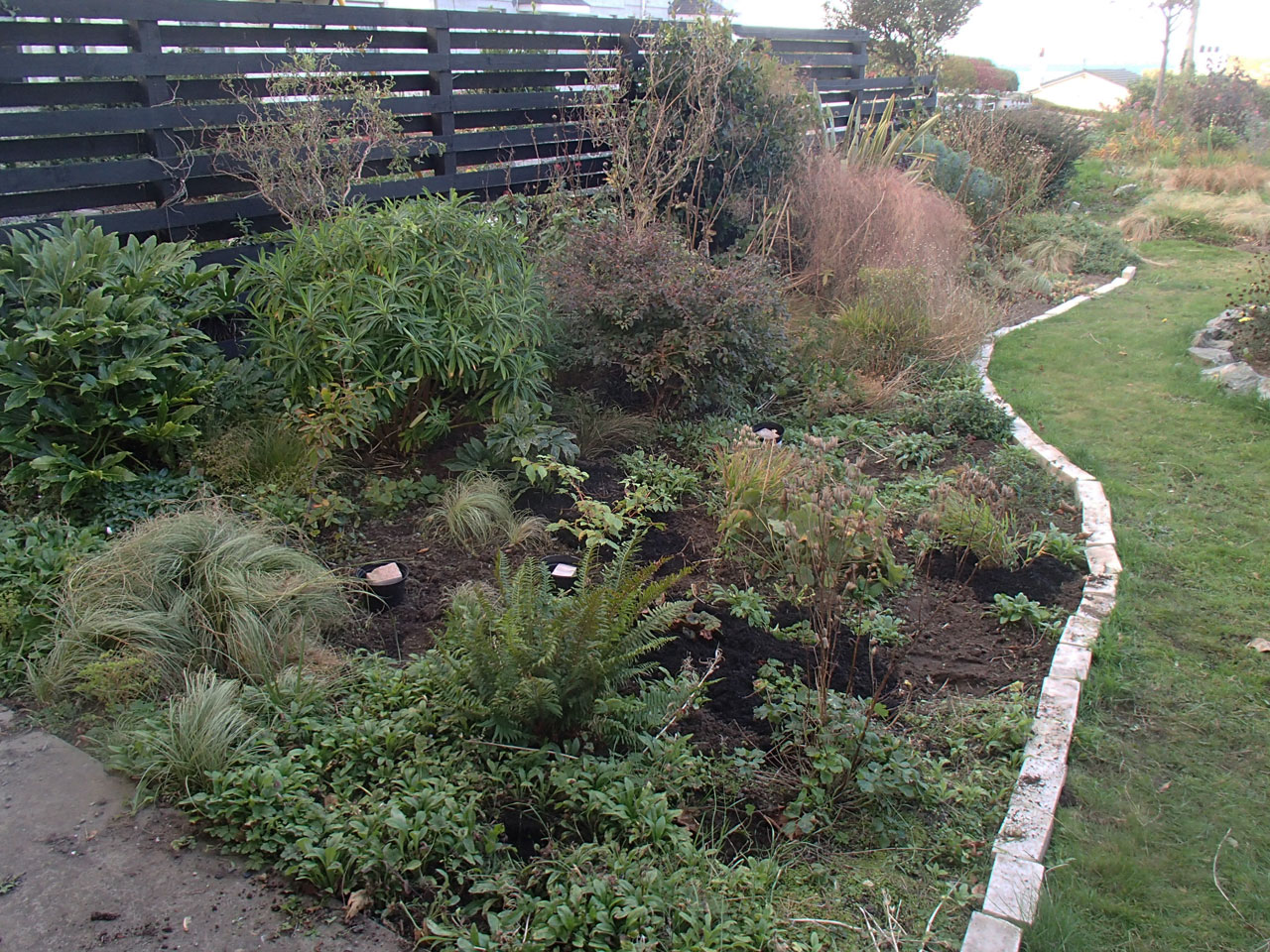 I moved the three Tellima grandiflora that I had into a block (if you can have a block of three) in front of the Polystichum, and started to map out the other foliage contrasts I wanted to create. I loved the way they massed the ferns at Plas Cadnant, so I ordered two more Polystichum, each slightly different. These will go next to the one already there, between it and the path. I also have a bargain bunch of hellebores growing on in the greenhouse. I love the architectural quality of the foliage, so I placed two empty plant pots to make a triangle with the one already there.

Three Tellimas – which have lovely coppery foliage in winter – just didn’t make enough of an impact, so I added another two to the plant list, and then put my thinking cap back on. I wanted another block of plants with contrasting foliage to march alongside the Tellimas. Back in my last garden before I drastically simplified the pond border, I had a clump of Carex muskingumensis. It is a lovely, semi-evergreen sedge, with thin, bright green, divided leaves. I found a wonderful photo of it grown in a big block running alongside a path at Knoll Gardens (you can see it as one of the illustrations of the plant on their website). That got added to the list, bought from them, and rather wonderfully they had run out of 2l pots, which was what they were selling, so substituted my 3 pots for 6 x 9cm pots instead! 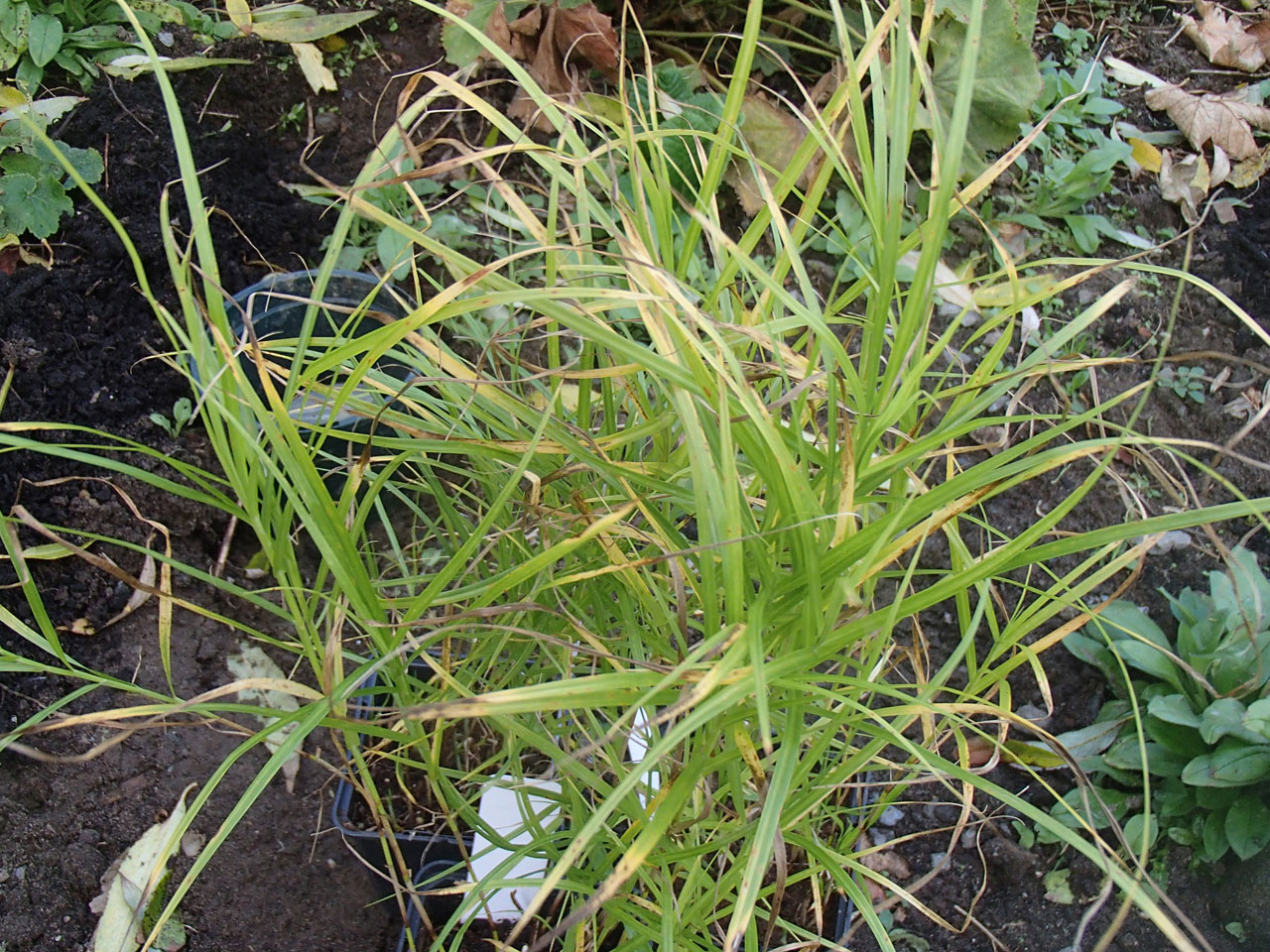 The leaves make a wonderful contrast with the tellima, I just hope they get enough sun to be happy. 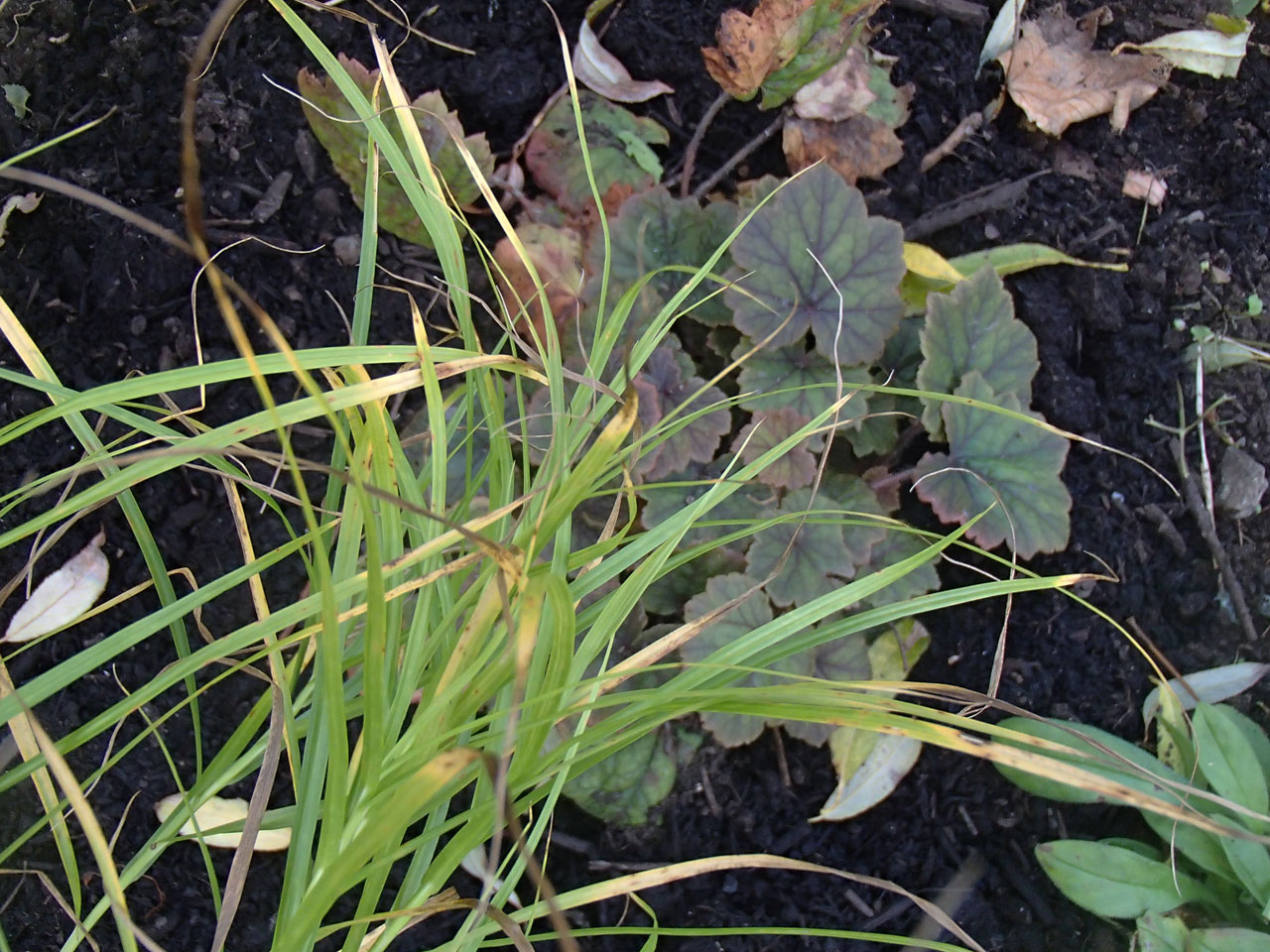 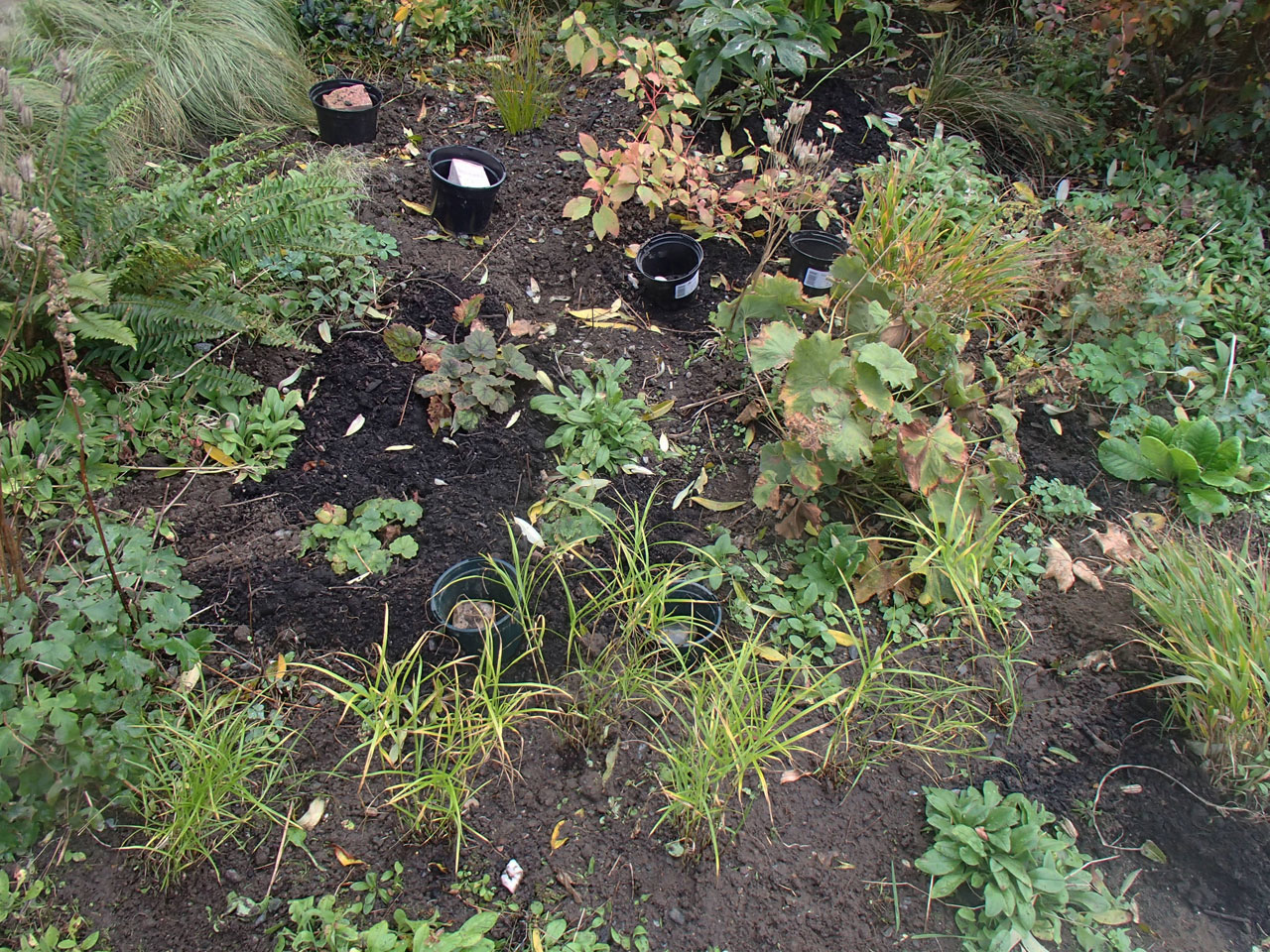 Coming together. I planted the carex quite close together, but I should soon be able to lift and divide them, and extend the feature.

I am also determined to try again with more Epimediums. When I first planted this area up I had wanted a swathe of them, contrasting with ferns. I thought I had lost them, but as it turns out they are remarkably tough, and survived to pop up again, after a year completely hidden, despite the dense cover of forget-me-nots and MYOB etc. The two survivors are Epimedium perralderianum. The coppery foliage on these goes wonderfully well with the orangey-brown flowers of the Euphorbia mellifera, and with the Amelanchier foliage, both when young, and when it is on the turn, as it is now. And of course it would also complement the leaves and stems of the Amelanchier. So, more are on order, and I hope to create a little river of them, running through the middle of the bed.

The next piece of the puzzle was another carex, Carex testacea, which has wonderful coppery tones in the fronds at some times of year. You can just about see how well it picks out the colours of the changing leaves on the dogwood: 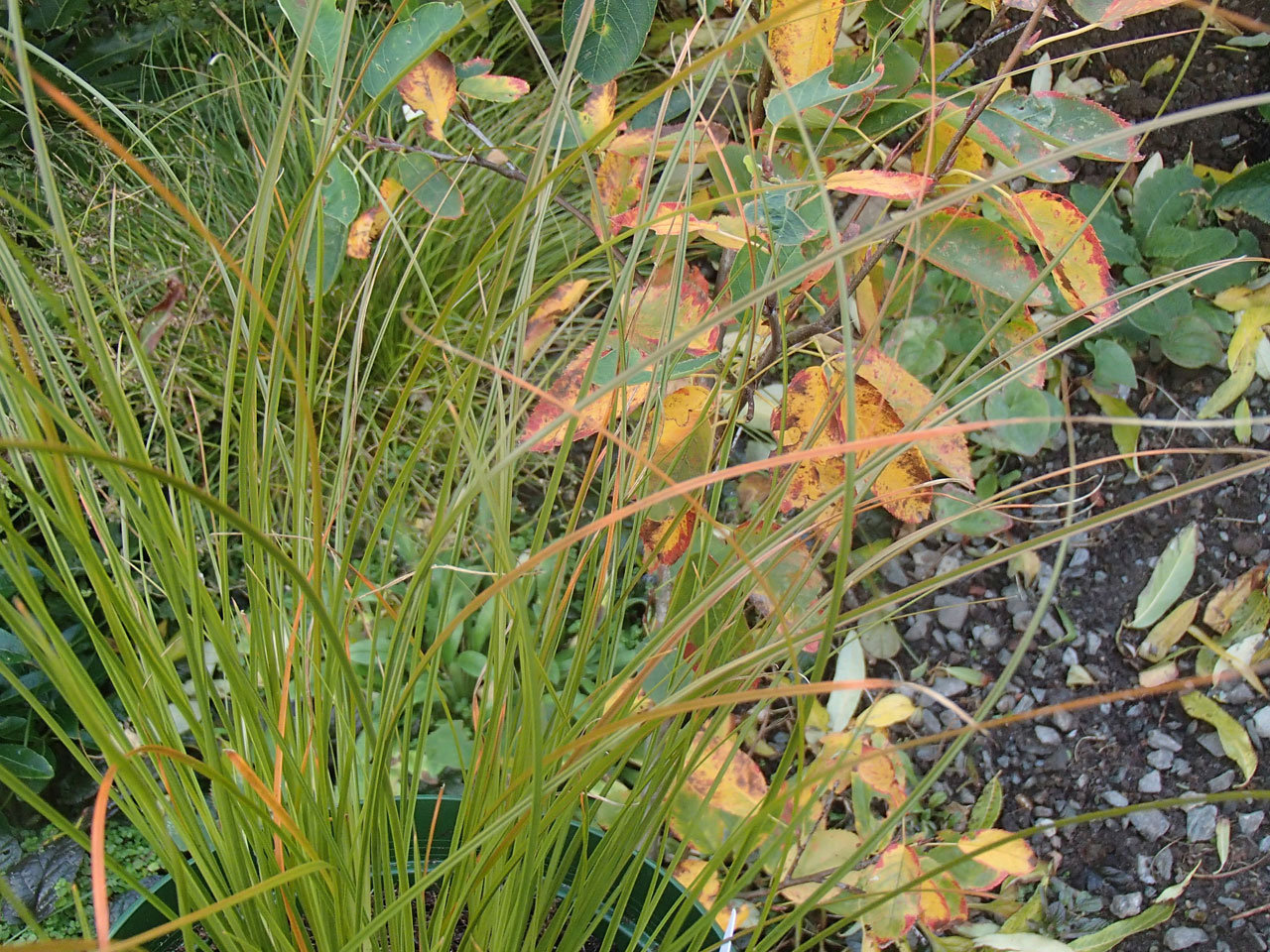 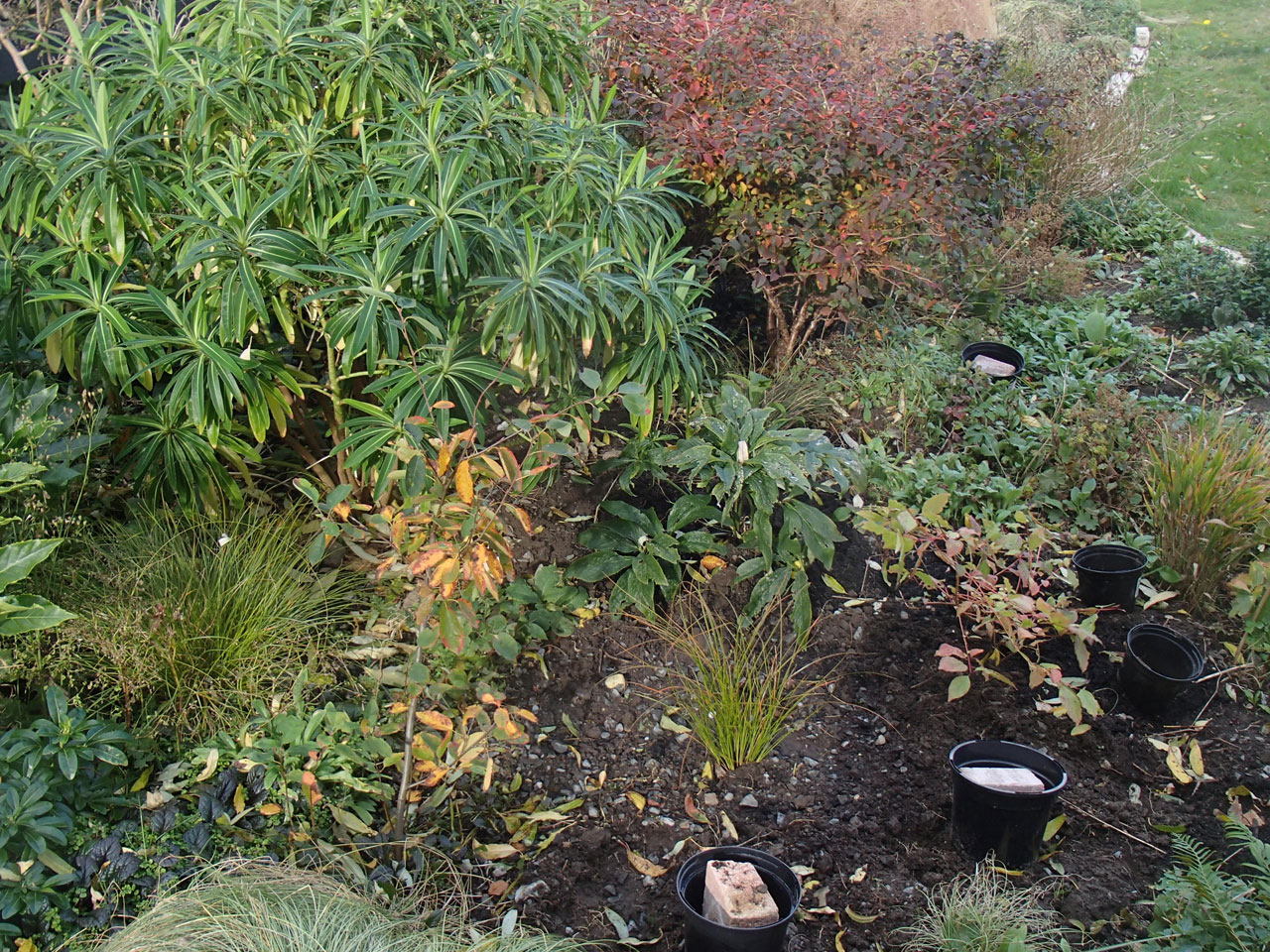 I had thought about sticking to solid blocks of foliage plants, in larger numbers, but I also really like repeated patterns of plants through an area, interspersed with smaller blocks, and in the end I decided that this would give me more interest and movement through the year. We’ll see! I also have various bulbs to plant in and around, which I am waiting to do when the ferns and epimediums arrive.

The final lightbulb moment has to do with my favourite famuily of grasses, miscanthus. When I was tidying up an area further up this border I decided that I would really love to see a miscanthus, one with good autumn colour, growing with the phromium, cotinus and euphorbia. There is already an aster there, and if I add some more late summer perennials next year it will make a lovely focus, well in to the autumn. I drooled at the huge selection of miscanthus that Knoll Gardens sell. I nearly opted for ‘China’, which I have grown before, but then I came across Miscanthus sinensis ‘Ferner Osten’. It is described as “Superb selection forming mounds of narrow foliage turning bright copper and red in autumn. Spectacular very dark red flower plumes.” Sold. And then I thought, rhythm and repetition… And then I thought, a miscanthus, catching the soft afternoon sunlight, dancing in front of Amelanchier… So ordered three.

The first is planted where it will help disguise the compost area, in front of the Fatsia and Amelanchier. 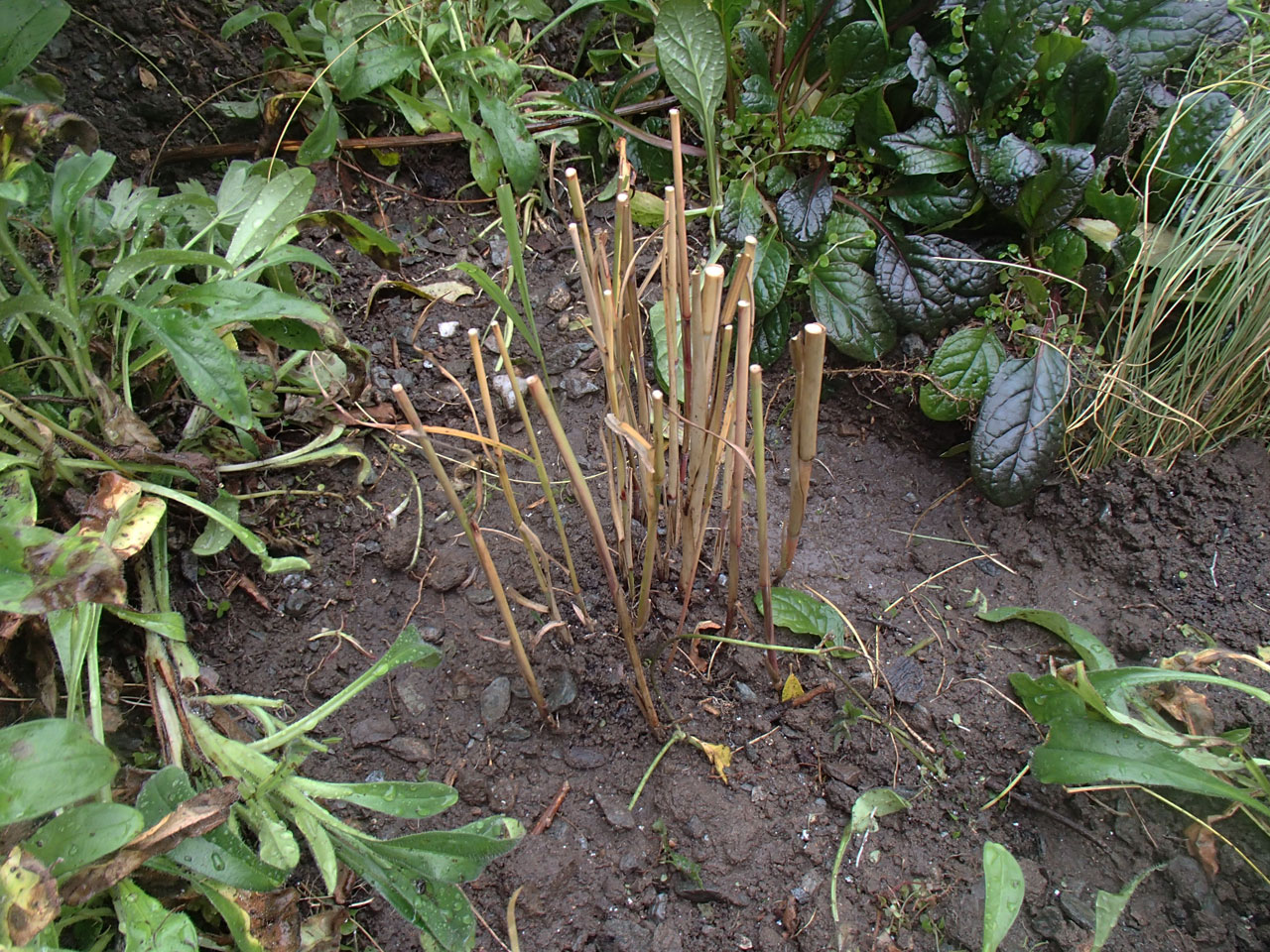 It doesn’t look like much at the moment, because of course it was cut hard back for transport, but next year…

The second slots in between two large clumps of Cephelaria gigantea: 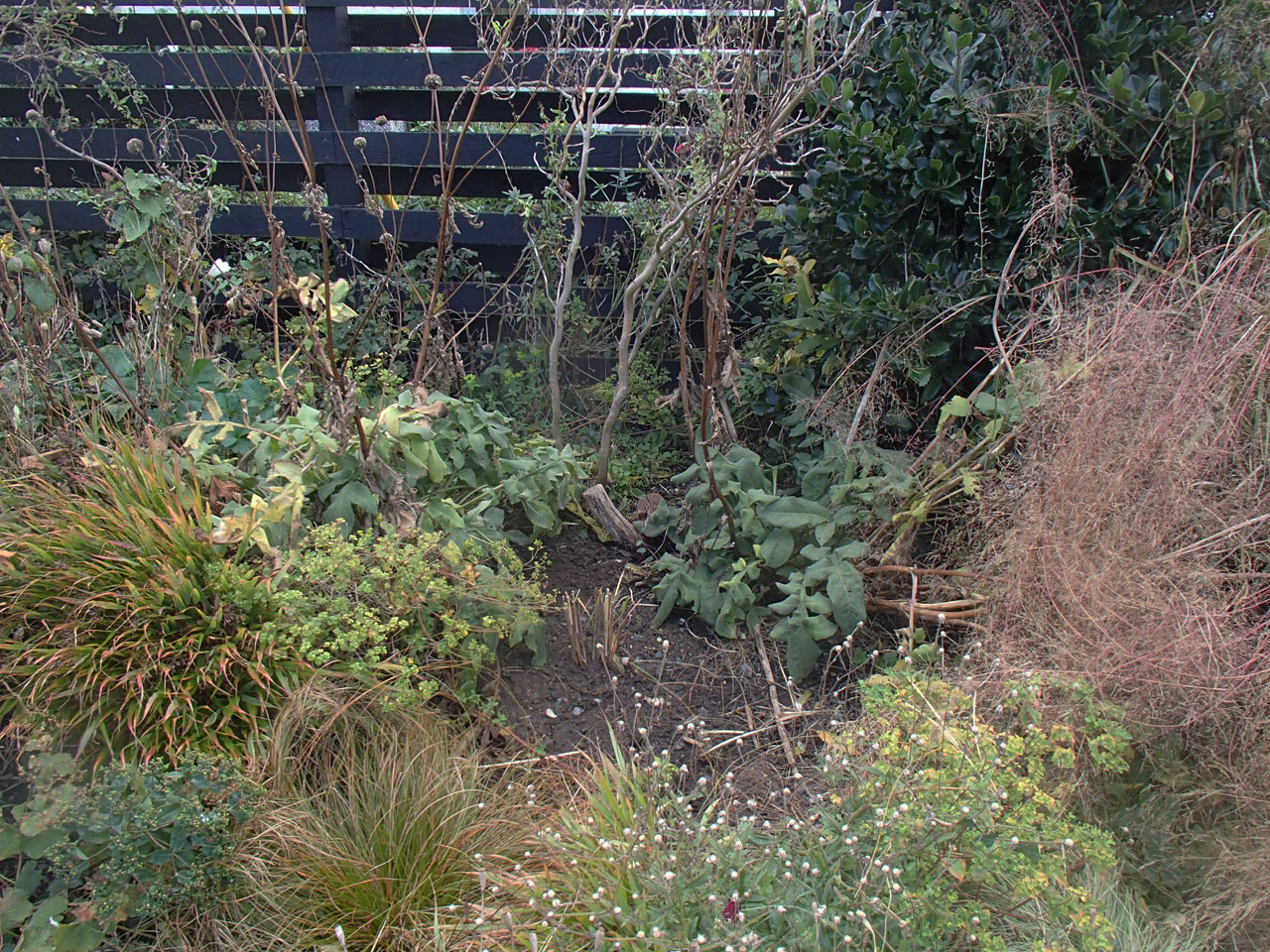 And the third slots in right where it should make a good show against the other strong foliage plants, not to mention adding some movement where it is currently all a little stiff. 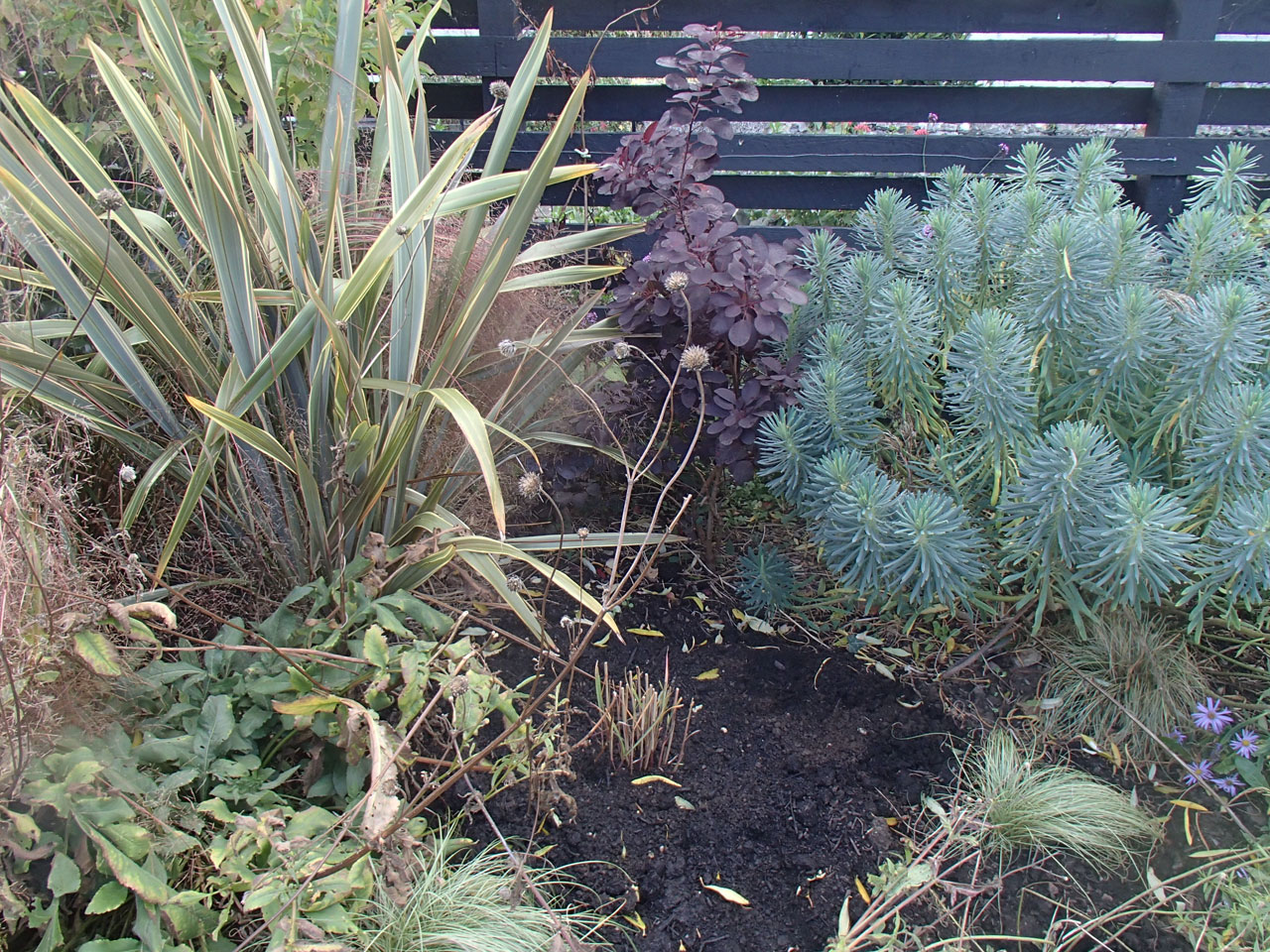 I’m happy with how it is all coming together, if a little nervous about what a harsh winter might do. 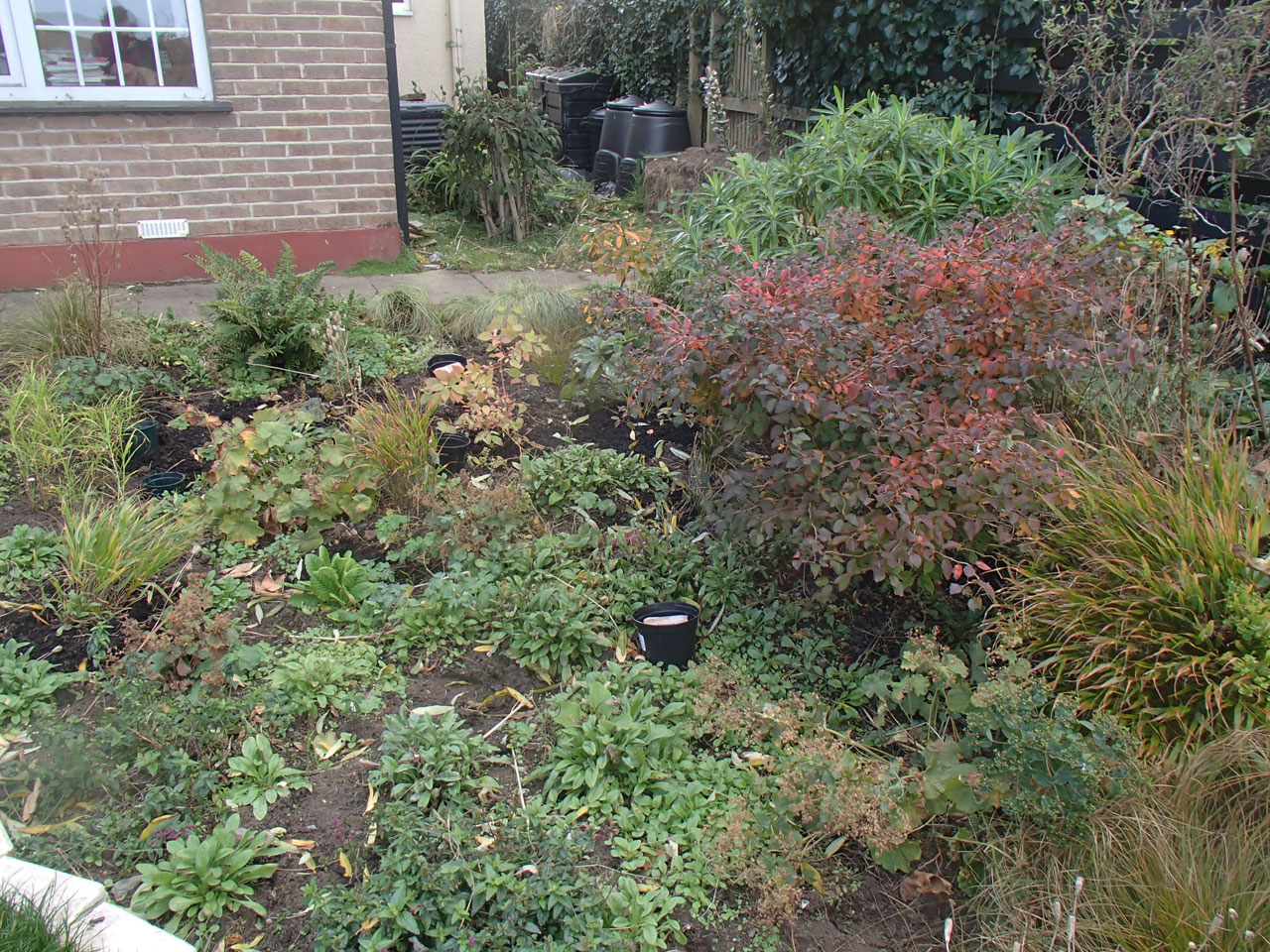 As you can see, there is still plenty of re-working to do on this border, particularly slightly further up where I have deepened it. Fortunately there are plenty of forget-me-nots at the moment, and I plant to add in geums, erysiums and possibly some sanguisorba – more of Plas Cadnant’s influence!

I’m going to finish my foliage worship with some shots of the beautiful Prunus incisa ‘Kojo-no-Mai’, which is lighting up the whole border, and contrasting wonderfully well with the Hakonechloa macra. 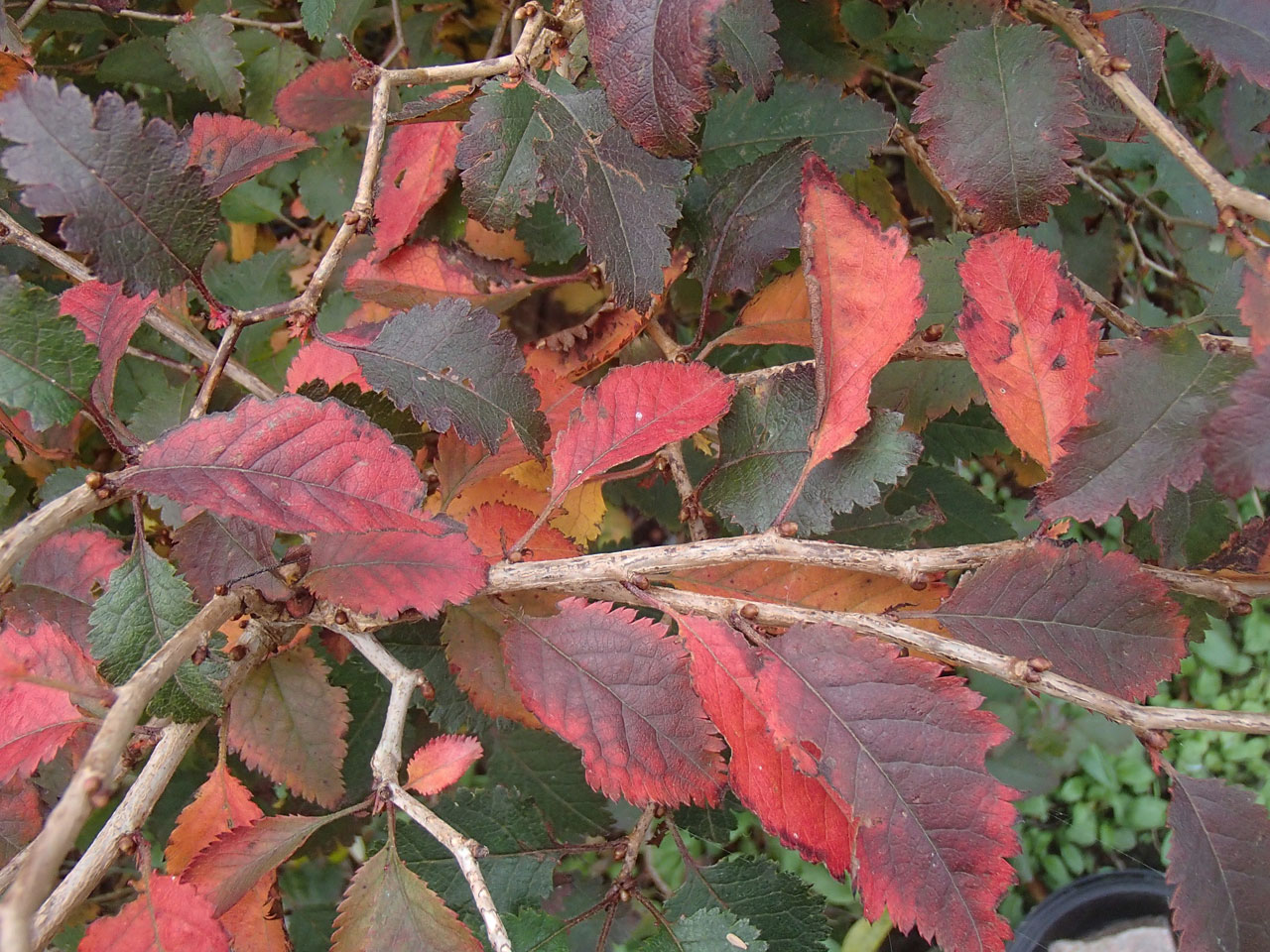 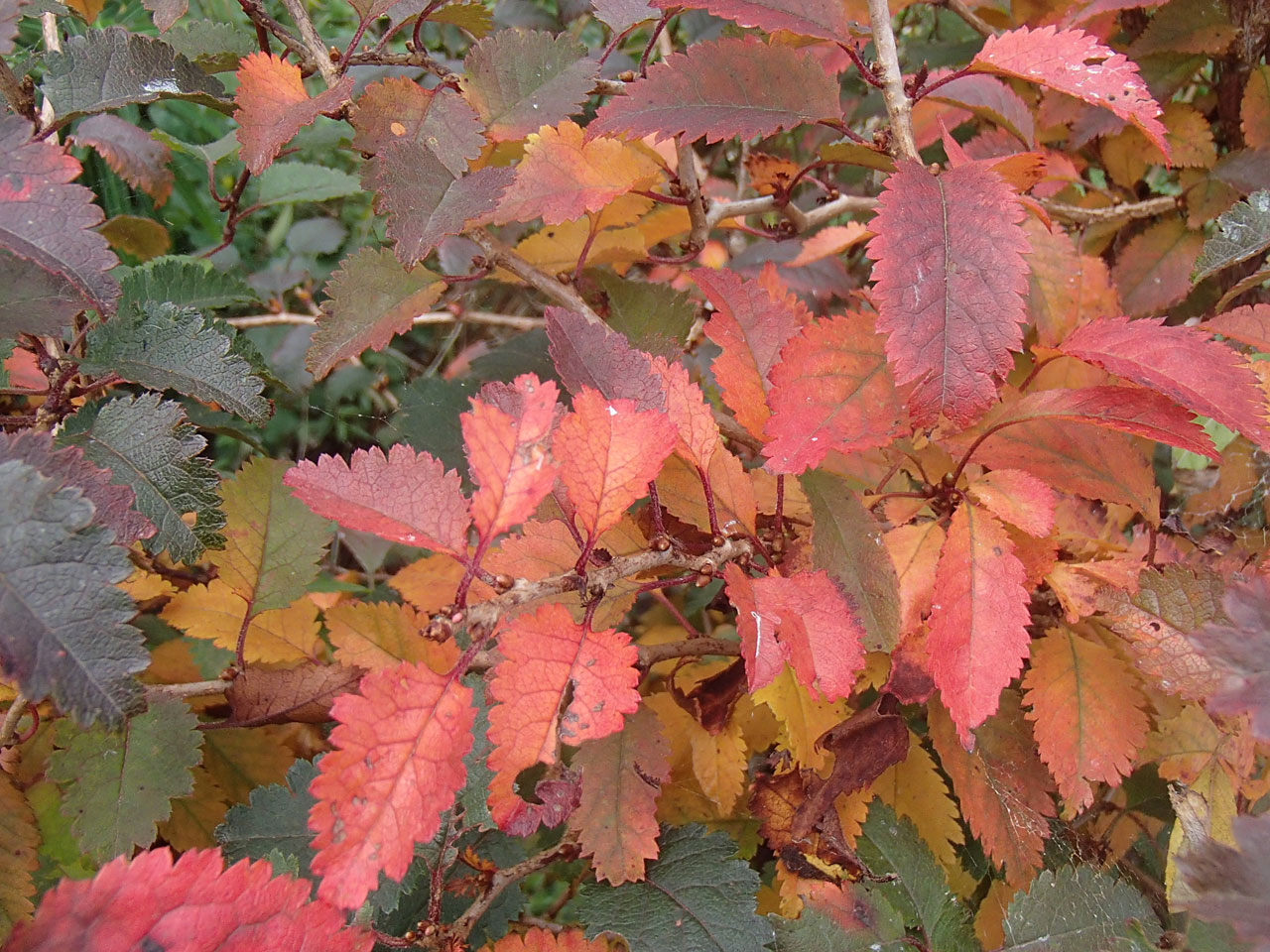 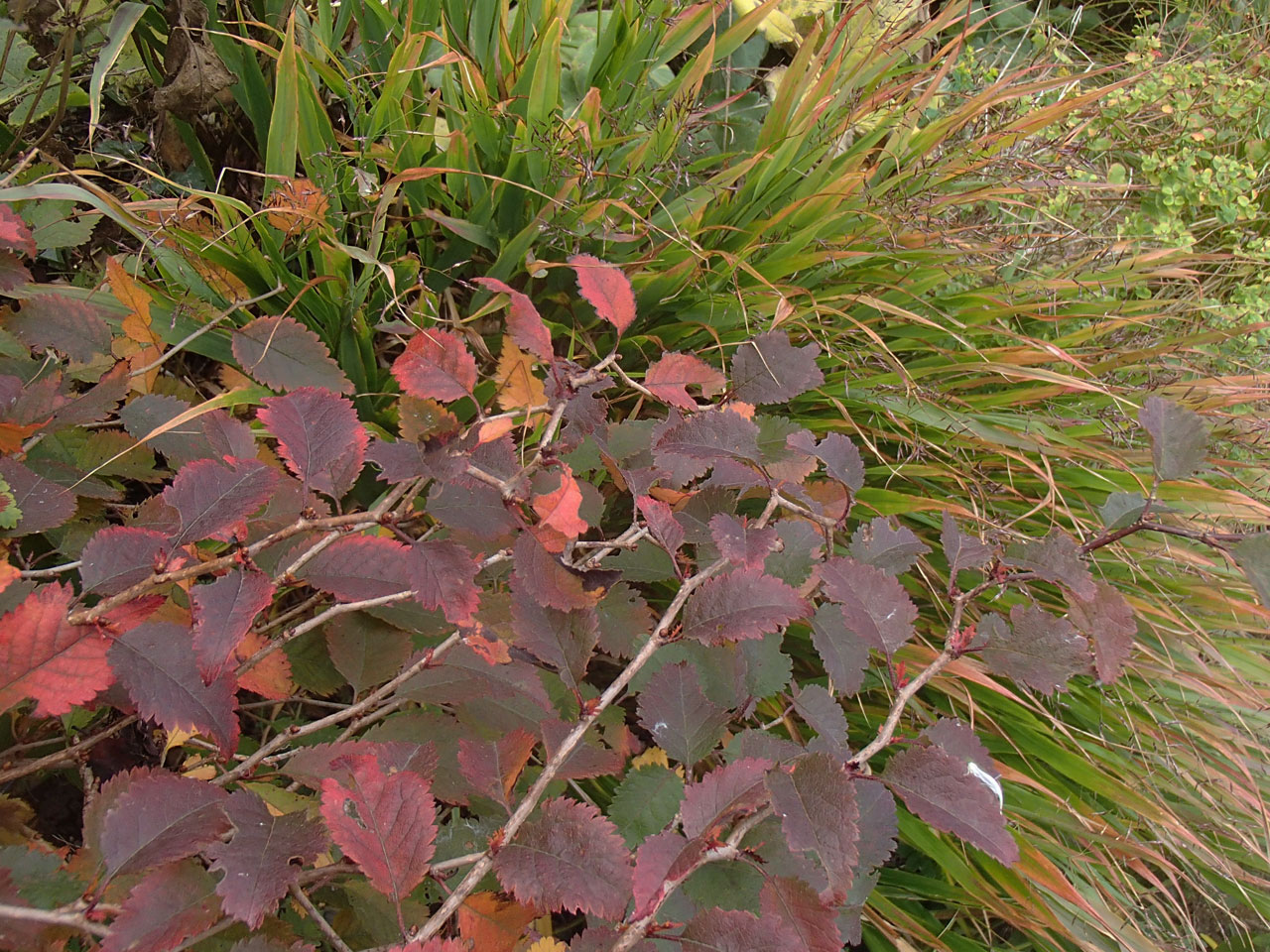 I am joining in with Christina’s celebration of foliage, and am off to get yet more leafy inspiration by reading the other posts contributing to the meme.